05Differences between individual cities: no one-size-fits-all

Cities are increasingly the destination for the most productive and highly skilled exporting firms. But cities can only succeed in supporting knowledge exporters in the future if they can offer knowledge exporters the appropriate business environment for these businesses to operate in.

The analysis outlined in the previous section suggests that access to skills and workers, proximity to other high-skilled firms, and access to markets are important business-environment characteristics influencing the nature of the export base in cities.

It highlights the cities’ different strengths and weaknesses that impact their ability to attract and grow knowledge exporters. Several differences emerge between the broad groups of cities identified:

Figure 17: Summary of findings for all cities 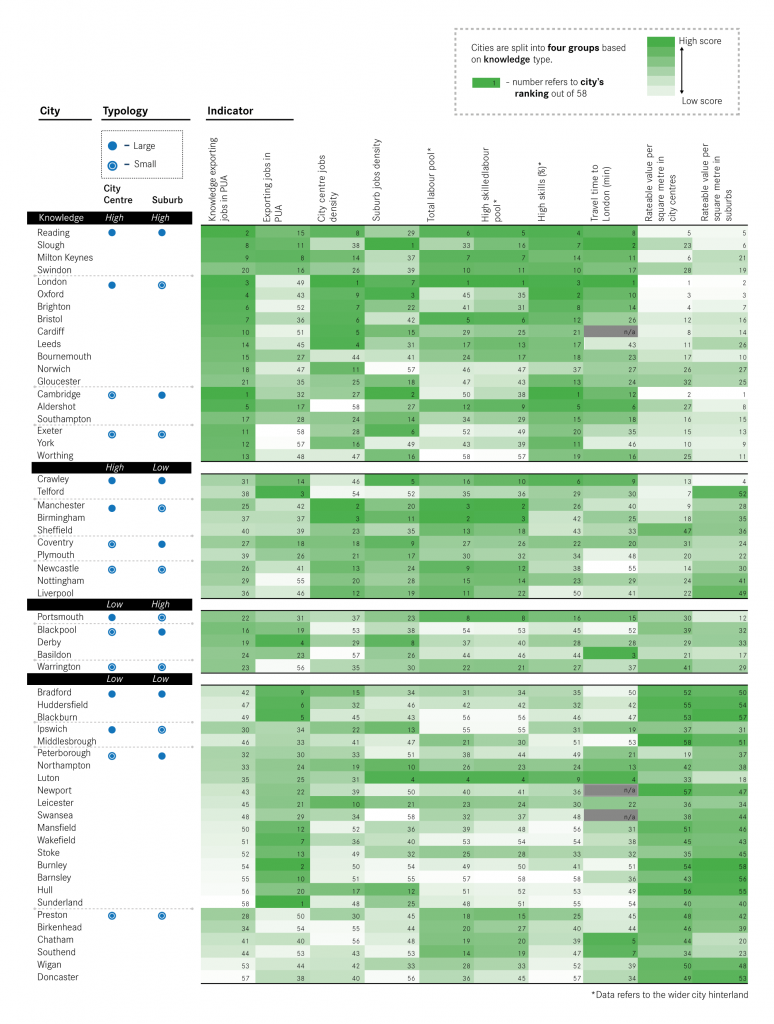 Download Figure 17 Summary of findings for all cities as an image.

The differences between and within the groups are explored further through four city case studies: Cambridge and Reading in group A, and Southend and Sunderland in group D – to identify how policy priorities differ in different cities.

In 2015, Sunderland had the largest exports per jobs across all British cities. Most of the export activity in Sunderland is concentrated in the suburbs and tends to be low-knowledge. The skills profile of the export base in the city is reflected in low levels of productivity.

One of the main challenges for Sunderland in attracting and growing knowledge exporters is the availability – or lack thereof – of a skilled workforce. Sunderland’s location is also relatively peripheral. While close to Newcastle, as well as Middlesbrough, Sunderland is otherwise located far from Britain’s large markets. A low density of jobs in its city centre may also help explain why Sunderland’s city centre has not attracted significant number of exporters.

Whilst Sunderland does offer businesses located there significant cost advantages – with relatively cheap and abundant land and cheap office premises – this reflects relatively weak demand. To attract more knowledge-exporting firms Sunderland will need to invest to improve the skills of the workforce and resident population, and encourage development in the city centre.

Reading also has a large export base, although firms tend to be more knowledge-intensive. Two in three exporting jobs in its city centre – and a similar proportion in its suburb – were considered to be high skilled.

Central to the strength of Reading’s economy is its large pool of highly skilled workers – as well as its dense city centre. Reading is also very well connected to London and Heathrow Airport, which facilitates the flow of people, goods and services. The opening of the western section of Crossrail, which is going to be operational from December 2019, will improve this connectivity further.

While Reading has so far been very successful in attracting and maintaining knowledge exporters, it is important that the costs of growth are managed. With some of the highest business property and housing costs in the country, businesses and workers may be deterred from locating in the city in the future if the costs begin to outweigh the benefits.

Southend is also well connected to London but it has struggled to attract and grow knowledge exporters, despite having rateable values which are less than half the average values in Reading. Its export base was small and low-knowledge both in its city centre and in the suburbs. Weak demand in the city is reflected in its relatively low density of economic activity, and low land and property values.

There is a large number of workers that live within commuting distance to Southend, but compared to other cities a very low proportion of Southend’s residential population have degree-level qualifications. The skills profile of the city’s resident population is likely to impact on its ability to attract knowledge-intensive exporters.

For Southend to be able to attract knowledge exporters, policy focus must be on upskilling and reskilling its resident adult population and encouraging more business activity in the city centre.

Cambridge’s export base is highly knowledge-intensive, both in the city centre and in the suburb. The city has been successful at attracting and maintaining research and development activities, and creating a tech cluster in its suburbs by fostering the links between businesses and the University of Cambridge. One of Cambridge’s most significant strengths is its very highly-skilled workforce.

But unlike other high-skilled city economies, the export base in the city centre of Cambridge is small. One explanation for this is the historic nature of its city centre, which constrains significant expansion and densification. The resulting decentralised nature of the development of Cambridge’s business base creates challenges in dealing with the costs of agglomeration in the form of congestion.

However, it is the fundamental undersupply of housing, and high land and office costs that pose a significant threat to the sustainability of the city’s success. Average house prices in Cambridge are some of the highest in the country; in 2016, Cambridge had the third highest house prices in the country behind London and Oxford. And the average cost of an office space in the suburb of Cambridge was higher than in any other city. Without significantly boosting the supply of housing and office space, Cambridge may struggle to attract businesses and workers in the future.

While Cambridge might have more in common with Reading than it does with Sunderland, in terms of the high-value nature of export activity located in the cities, there are differences between them. Cambridge’s city centre does not play the same role as Reading’s and the city’s overall labour pool is smaller, for example. While the characteristics of these places differ, the policy responses to attract, retain and grow the export base in these cities will also differ.

The concluding section of this report sets out what the findings from this report mean for the industrial strategy, and how the policy mix will need to vary in different cities.