This section explores the cohort of graduates who were working in Manchester six months after graduating in 2014 and 2015.

Figure 24 brings together all new graduates working in Manchester to provide an overview of the nature of the graduate workforce in the city. It shows that 31 per cent of new graduates were originally from Manchester and had studied in the city and a quarter left to study elsewhere but returned for work. Combined, this means that the majority of graduates were originally from the city. One in five graduate workers first moved to Manchester to study, and stayed on graduation, while the final quarter of graduates moved to the city for the first time to work.

Manchester has the seventh highest shares of home-grown graduates (who grew up, studied and worked in the city), similar to both Sheffield and London. Interestingly, the share of graduates who first moved to the city for work is low relative to other cities. For example, in Bristol, 40 per cent of the workforce are in this category, and in Oxford, this figure rises to 47 per cent.

The distribution of degree classes for graduates working in Manchester is representative of the UK graduate population as a whole, as Figure 25 shows. Just over half the graduate workforce had first-or-second class degrees from a non-Russell Group university, with 23 per cent achieving a lower class degree. Russell Group graduates made up 23 per cent of the workforce, the majority with a first-or second-class degree. 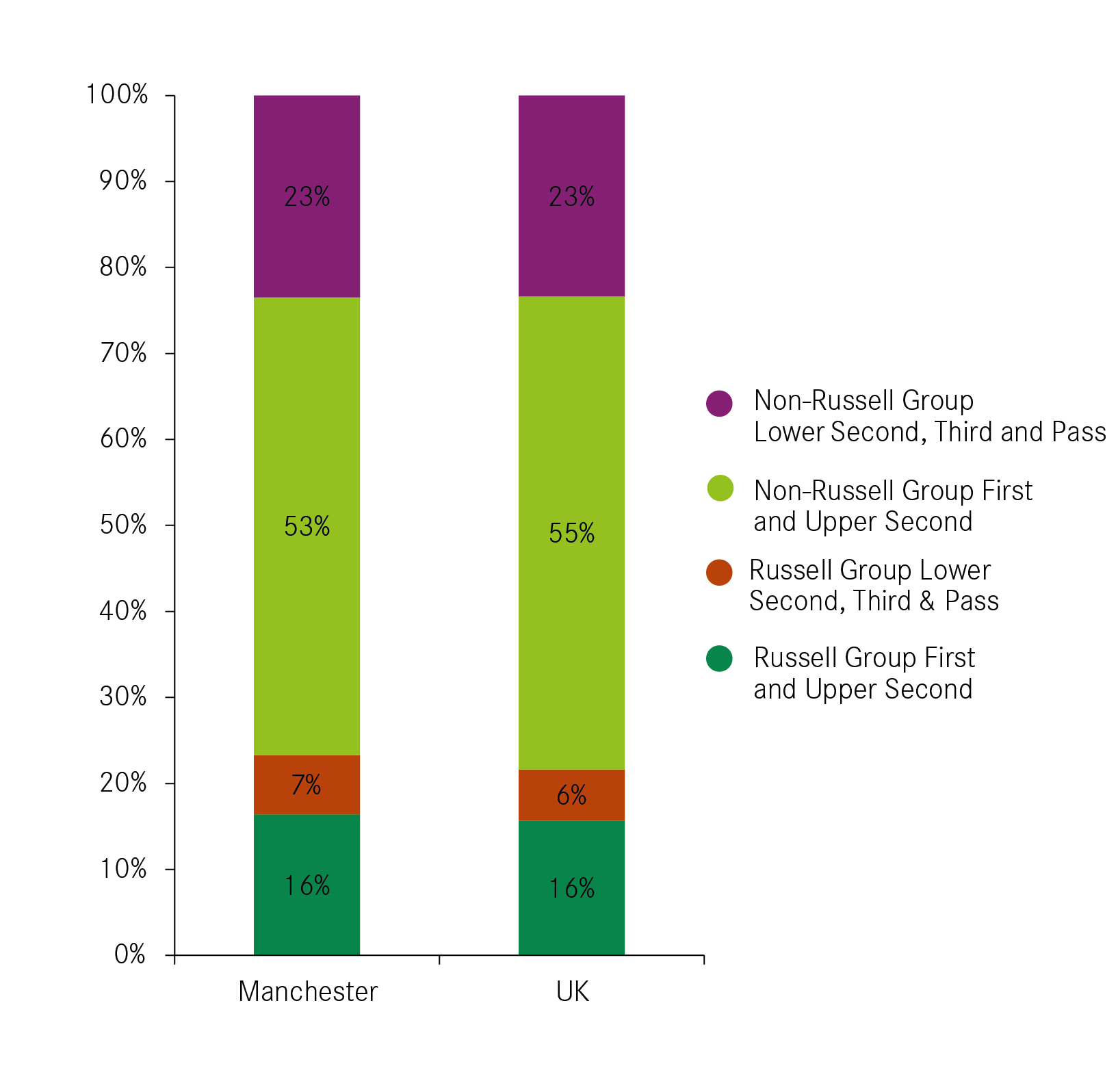 The average wage of a new graduate working in Manchester was £20,870, which was one of the lowest wages of all UK cities and below the mean UK graduate wage of £23,100. Cities offering similar wages were Sheffield, Bradford and Cardiff. 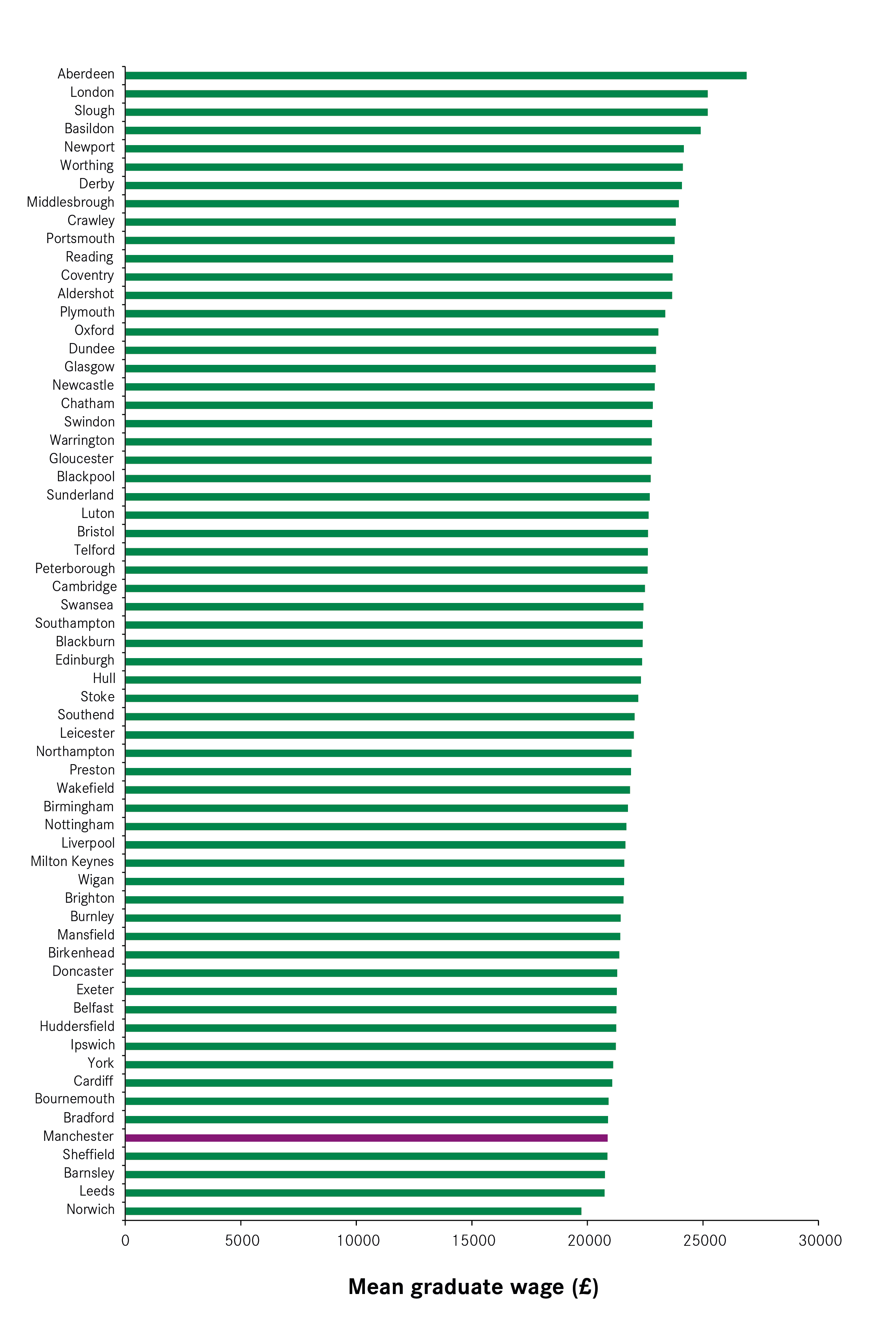 But the wages of Manchester graduates varied significantly by both the institution and location of employment. The University of Manchester had the best-paid graduates, averaging £22,700, but those who moved away from Manchester earned much more than those who stayed in the city. This was also the case for graduates of the University of Salford and Manchester Metropolitan University where wages increased significantly if the graduates chose to work elsewhere. Graduates of RNCM had the lowest average wages of £16,600, but, interestingly, those who chose to stay in the city had much higher wages on average than those who moved away. This is likely to reflect the concentration of cultural and arts jobs in the city compared with other parts of the UK. 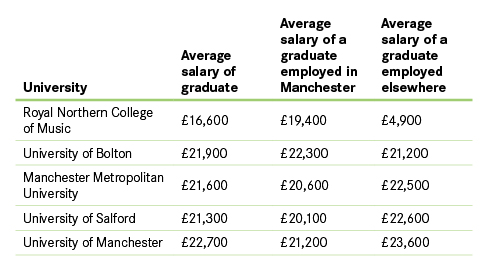 This, however, shouldn’t be of particular concern to the city. Analysis of UK graduates finds that graduate wages were not the main reason for graduates choosing their employment location. Other factors such as the type of jobs available in that city and the opportunities for career progression are more important.

The types of jobs available to graduates in each location are a major determinant of where they choose to work. The sectors in which Manchester’s new graduate cohort work are representative of the total population of new graduates across the UK, as Figure 28 shows. Almost half (47 per cent) of the new graduates work in the public sector, which is very similar to the share of UK graduates overall working in this sector.

Looking next at the private sector, 16 per cent of graduates are employed in knowledge-intensive business services firms (KIBS) and 30 per cent in other private services sectors. Although this is similar to the share of all UK graduates working in the sector, it lags behind other strong city economies such as Edinburgh, Reading and London, where roughly a quarter of graduates work in KIBS.

Looking at a finer industrial breakdown shows that almost a quarter (23 per cent) of the new graduate cohort worked in the education sector and one in five in healthcare. In the KIBS sector, 4 per cent of the city’s new graduates were working in financial services and 5 per cent in law. Manchester’s retail sector employed 8 per cent of graduates.

The city’s private sector graduate jobs tend to be located in the city centre. In 2014/15, 30 per cent of the new graduate cohort was employed within M1, M2 and M3 postcodes. This figure was even higher for the KIBS sector, with 45 per cent of graduates working in this sector located in the three central postcodes. 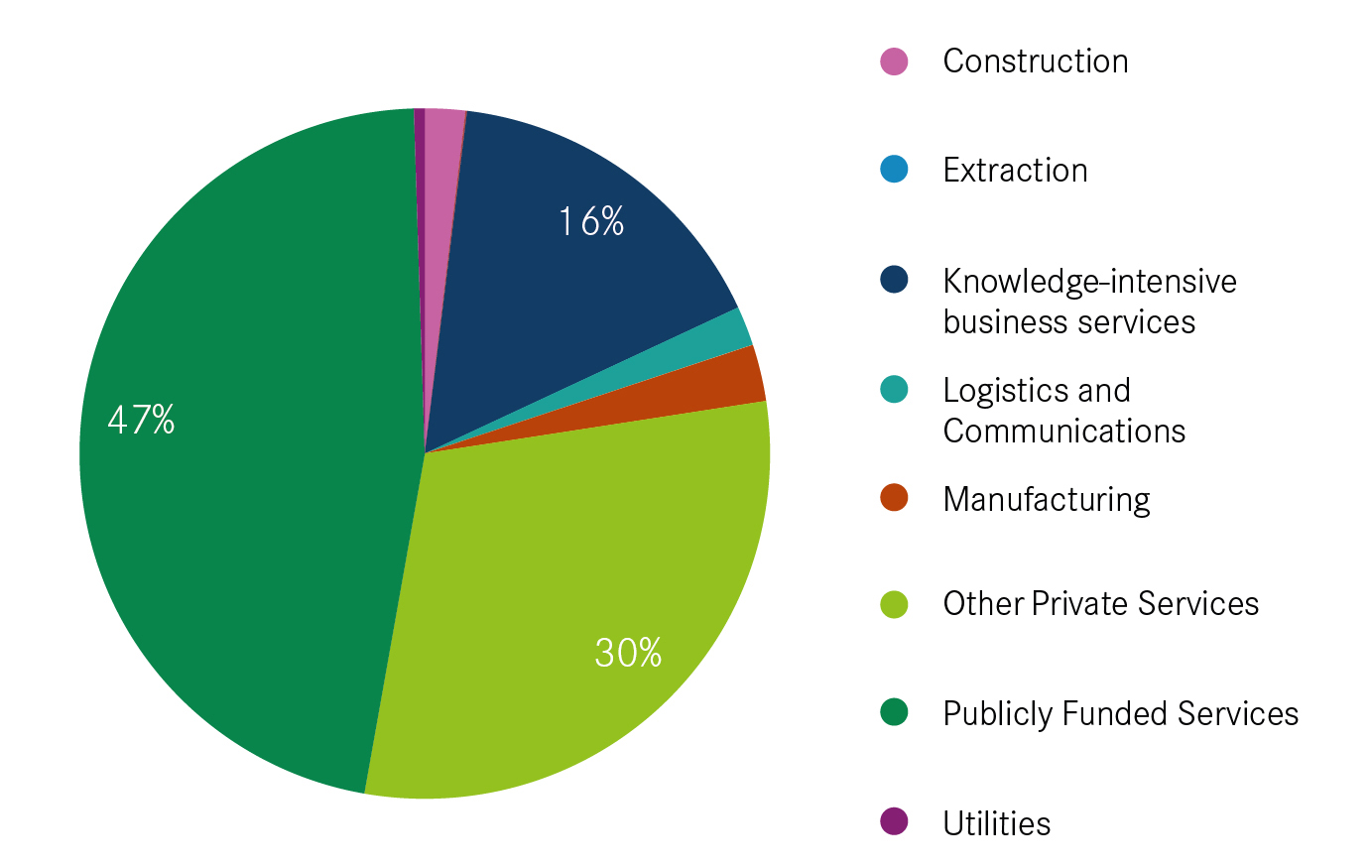 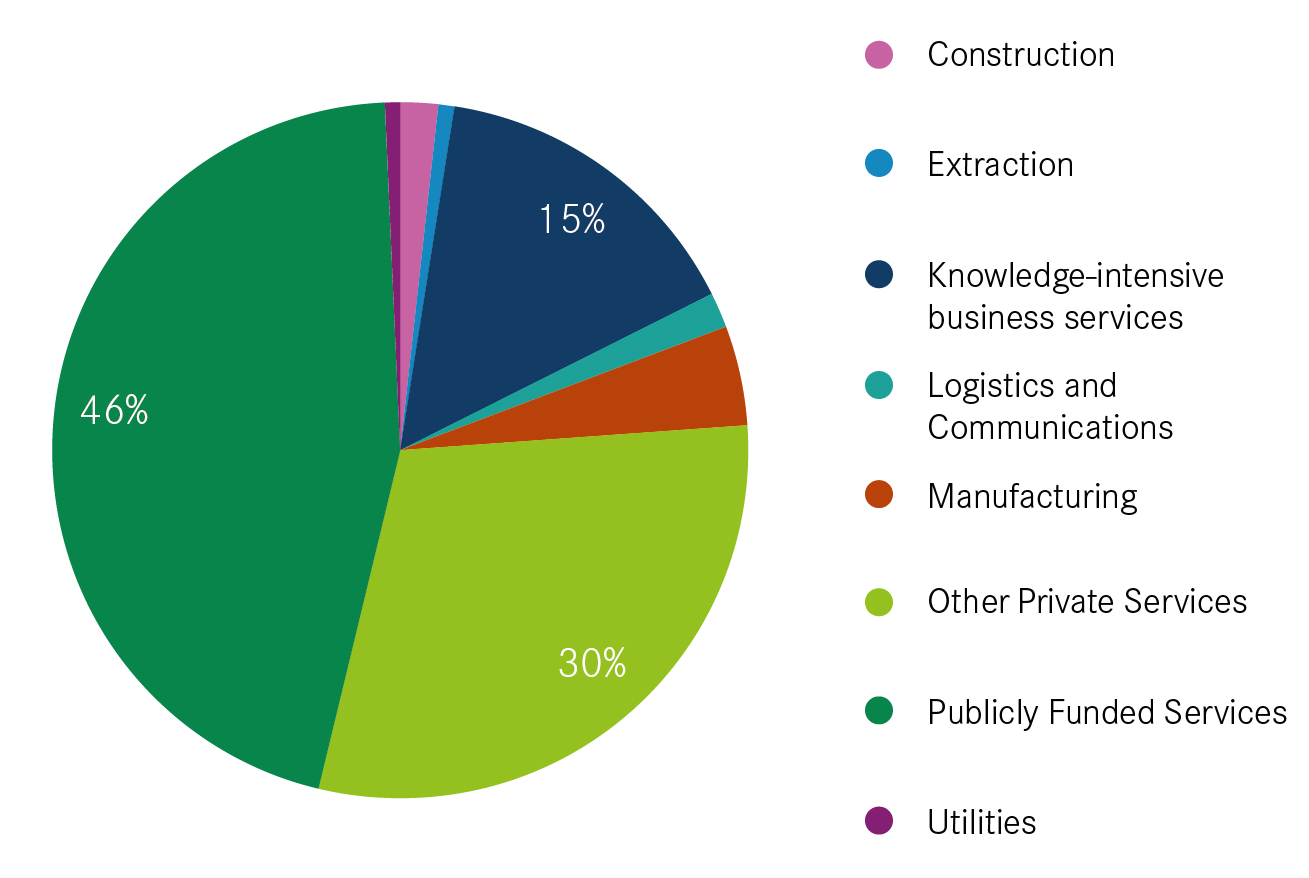