This section combines data on migration within the UK from the ONS and the 2011 Census to look at migration to and from Manchester by age and qualification. This data does not include international migration.

Manchester loses people to the rest of the North West

Between 2009 and 2017, 436,440 people moved into Manchester from elsewhere in England and Wales and 568,060 moved out, leading to a net outflow of 31,620 people from the city. This was the third largest net outflow from any English or Welsh city during the period. In comparison, London experienced a greater net outflow of 340,310 people while Bournemouth saw a net inflow of 15,090 people moving into the city.

3Much of this migration was between Manchester and other parts of the North West. A third of those moving into Manchester came from elsewhere in the region, and a third of those leaving the city stayed within the North West. This resulted in an overall net outflow of 29,200 people to the region, as shown in Figure 1. There were also considerable net outflows from Manchester to London and the South West, 6,220 and 3,740 respectively. On the other hand, the city experienced net inflows from the North East, West Midlands, Yorkshire, South East and East, but these were small. 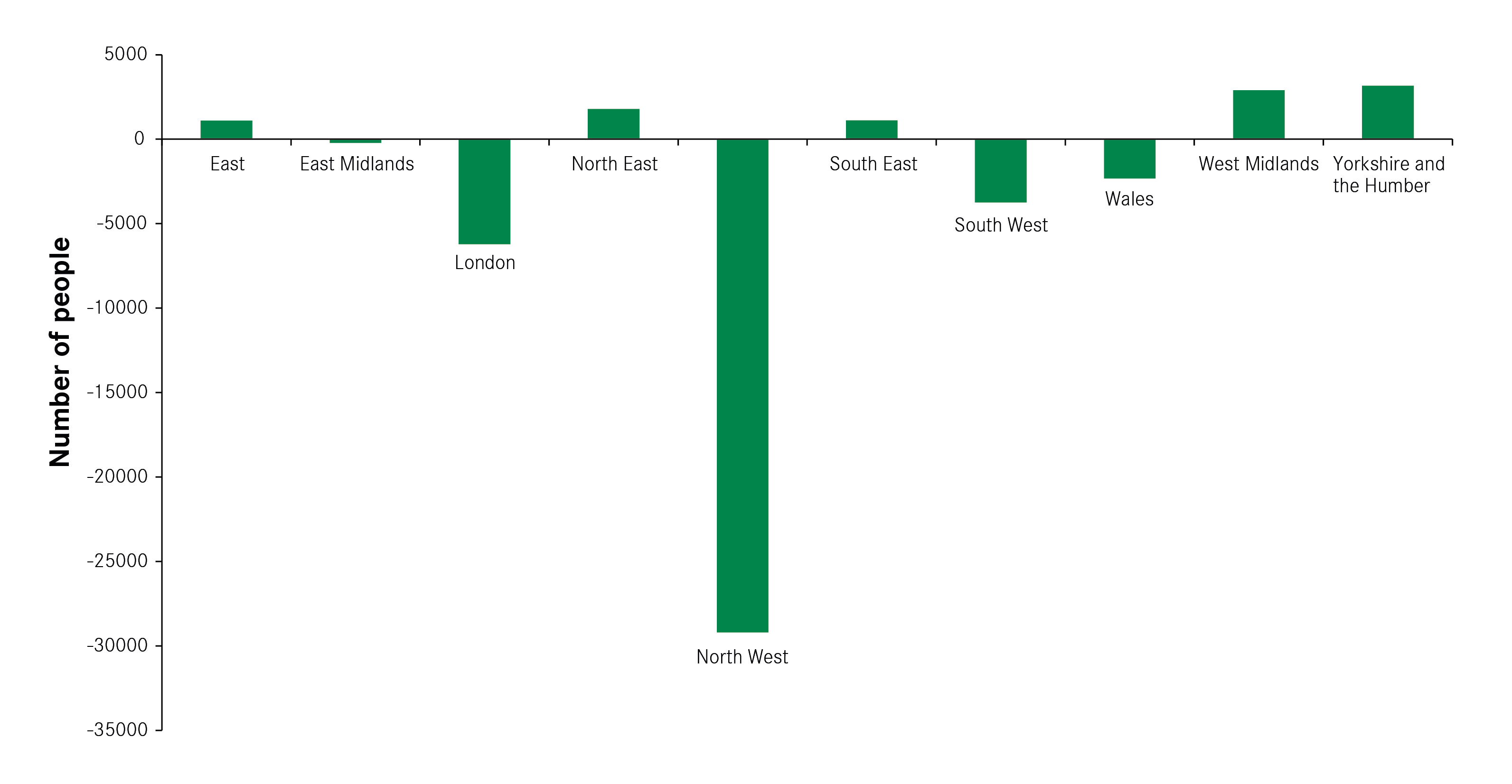 Looking specifically at cities, the greatest net outflow from Manchester was 5,850 people moving to London, as shown in Figure 2. The largest net inflows to the city were from Liverpool and Burnley, equivalent to 1,380 and 1,370 people respectively. 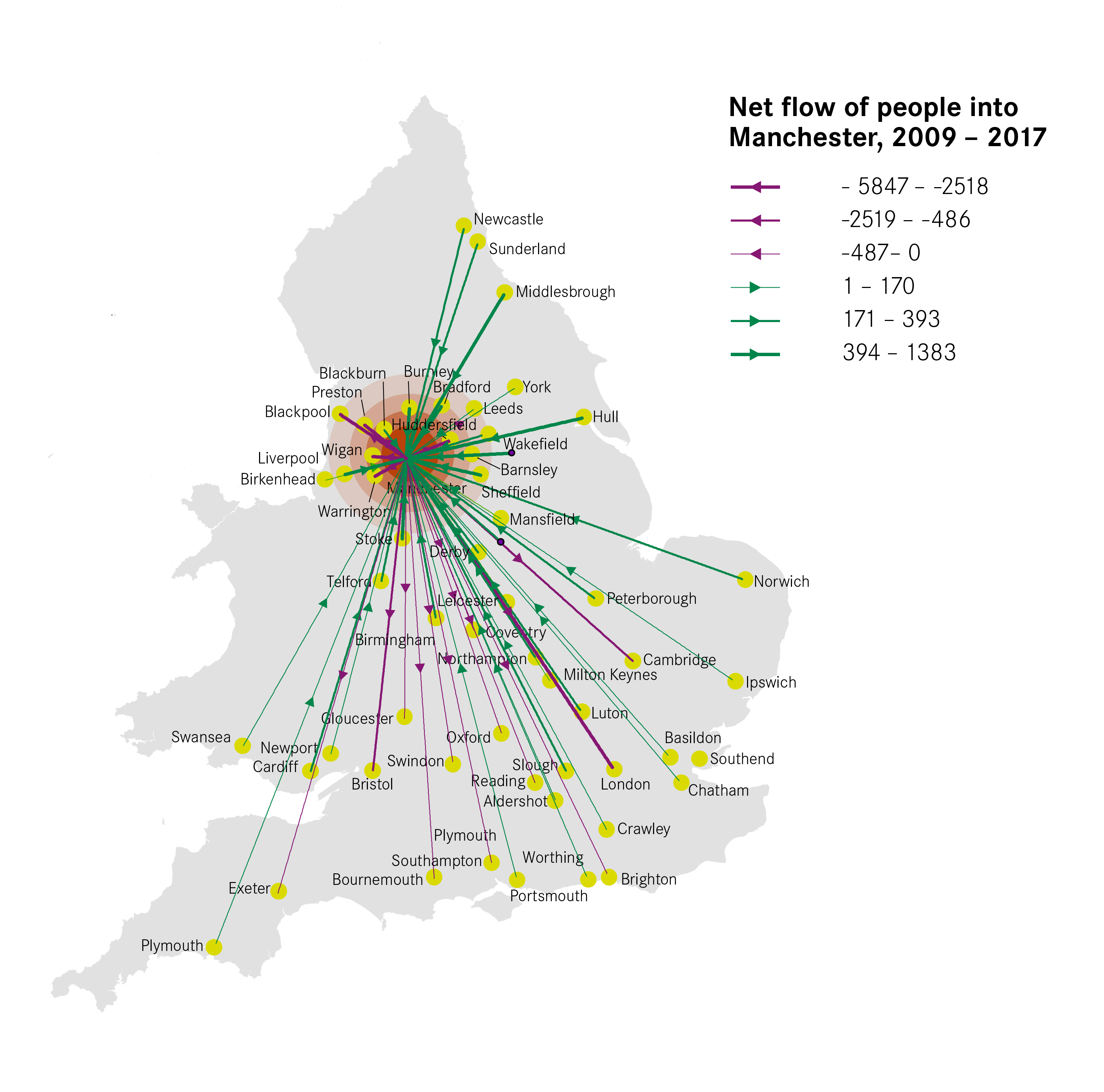 Figure 3: Contribution of each age group to migration and to the city’s population, 2009-2017 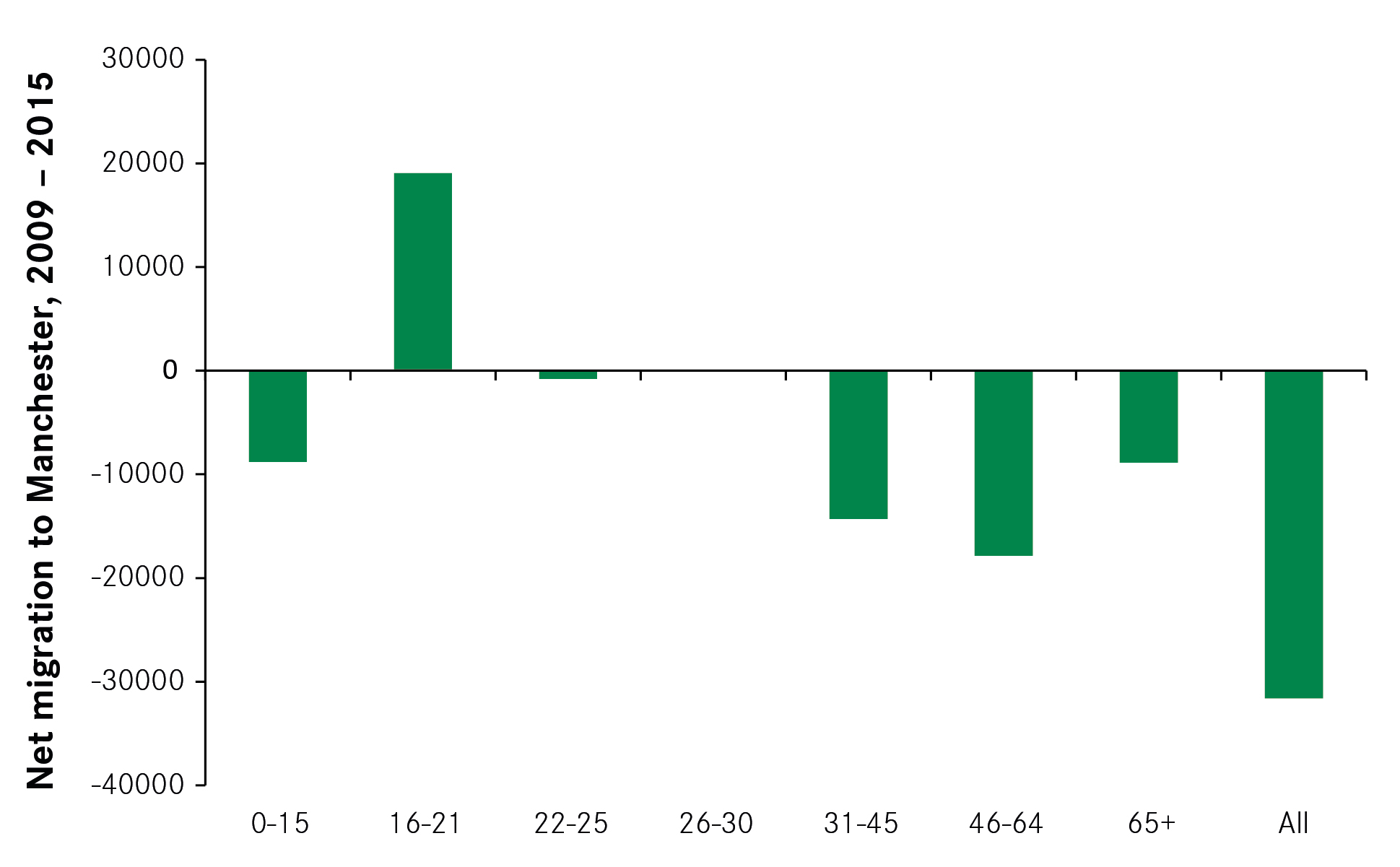 While the ONS migration data does not provide information on the qualifications of migrants, the 2011 Census does for those who moved between 2010 and 2011. When the data is split into three age groups: 16-to 21, 22-to 30- and 31- to 45-year-olds, three distinct trends emerge.

Manchester saw a net inflow of 16- to 21-year-olds from all regions but one, as shown in Figure 5. The largest inflows were from the West Midlands, South East and London. These flows were dominated by those with A-level qualifications or equivalent, highlighting the pull of the city’s universities which will be discussed in greater detail in the next section. The exception was Yorkshire, to which there was a net outflow of young people driven by movements to Leeds and Sheffield.

The city also experienced net inflows of 22- to 30-year-olds from several regions, the most significant being from the North West and Yorkshire, as Figure 6 shows. But for this age group net inflows were dominated by degree holders. The city saw a large net outflow of graduates to London, with an overall loss of 1,730 to the capital between 2010 and 2011. So the city pulls in young graduates from across the North while also losing many to London. 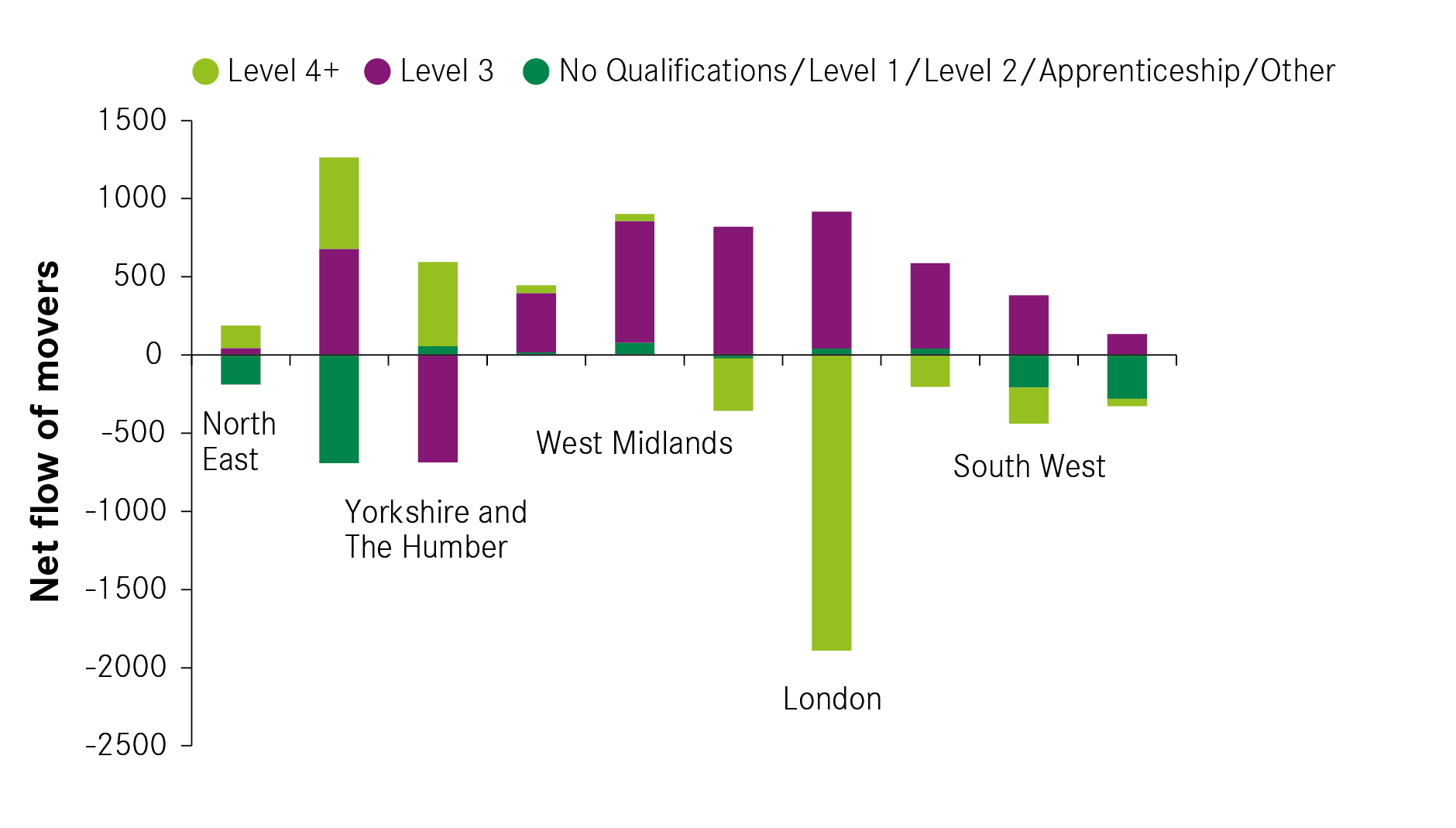 The pattern of graduate migration changed for those aged 31 to 45, with a net outflow of these residents to all regions except a small net inflow to Yorkshire (see Figure 7). So while graduates continued to move into the city up until their mid-0s, after 30 they were more likely to leave. But many stayed nearby, with the largest net outflows of this age group being to other parts of the North West. Those with lower skills were also more likely to leave than move to Manchester, with a net outflow of 420 of these residents to the rest of the region.

Looking again at the wider migration data for 2009 to 2017, from the ONS, allows us to see movements between local authorities and shows that the majority of people did not travel very far. Cheshire East and Warrington were the local authorities to which Manchester lost the greatest number of 31-to 45-year-olds, followed by Rossendale and High Peak. This means that many of these movers remained within commutable distances to Manchester even if they no longer lived in the city. 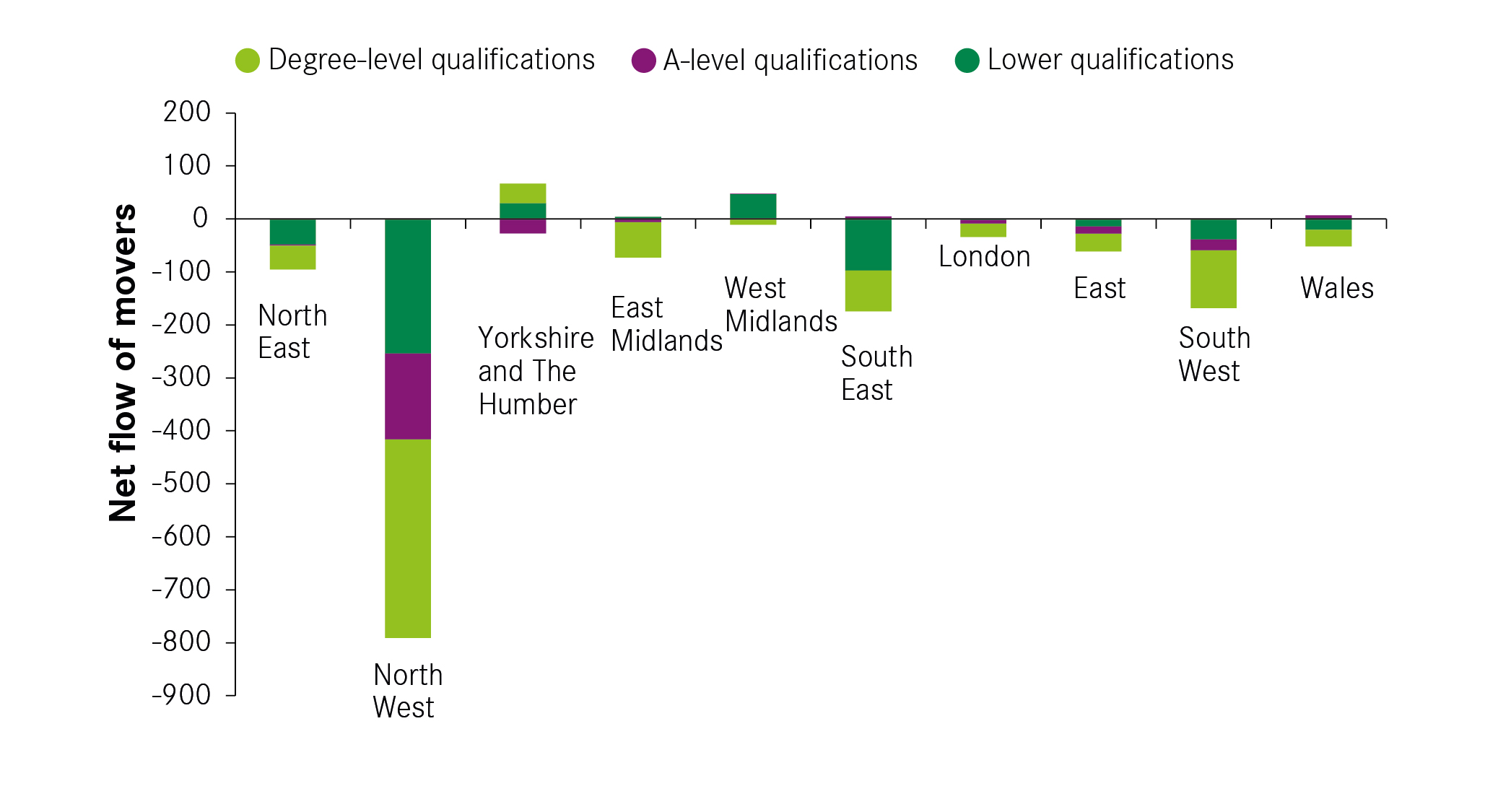 This trend in older degree holders leaving the city but staying within commutable distance is common to many UK cities. Previous work by Centre for Cities has shown that those aged between 35 and 54 tend to place more value on the size and type of their houses, and access to local schools, leading many to prefer living outside cities.2