The data above suggests that universities play a large role in the movements of people to and from Manchester. This section explores the migration of students and graduates into and out of the city using two data sets from the Higher Education Statistics Authority (HESA). The first looks at admissions (for all students at university in 2014/15), and the second is based on a survey of graduates six months after graduation (for leavers in 2013/14 and 2014/15). Unlike the ONS data used above, it covers the whole of the UK and includes international students.

Movements of students to university

Overall, the student population has a strong local focus, with 31 per cent of students in 2014/15 originally from Manchester and 16 per cent from elsewhere in the North West, as shown in Figure 8. There were also a significant number of international students, accounting for 19 per cent of university students. Of those moving from other regions, Yorkshire and the West Midlands were the most popular origins.

Figure 9: Origin cities of those students who moved to Manchester for university, 2014/15 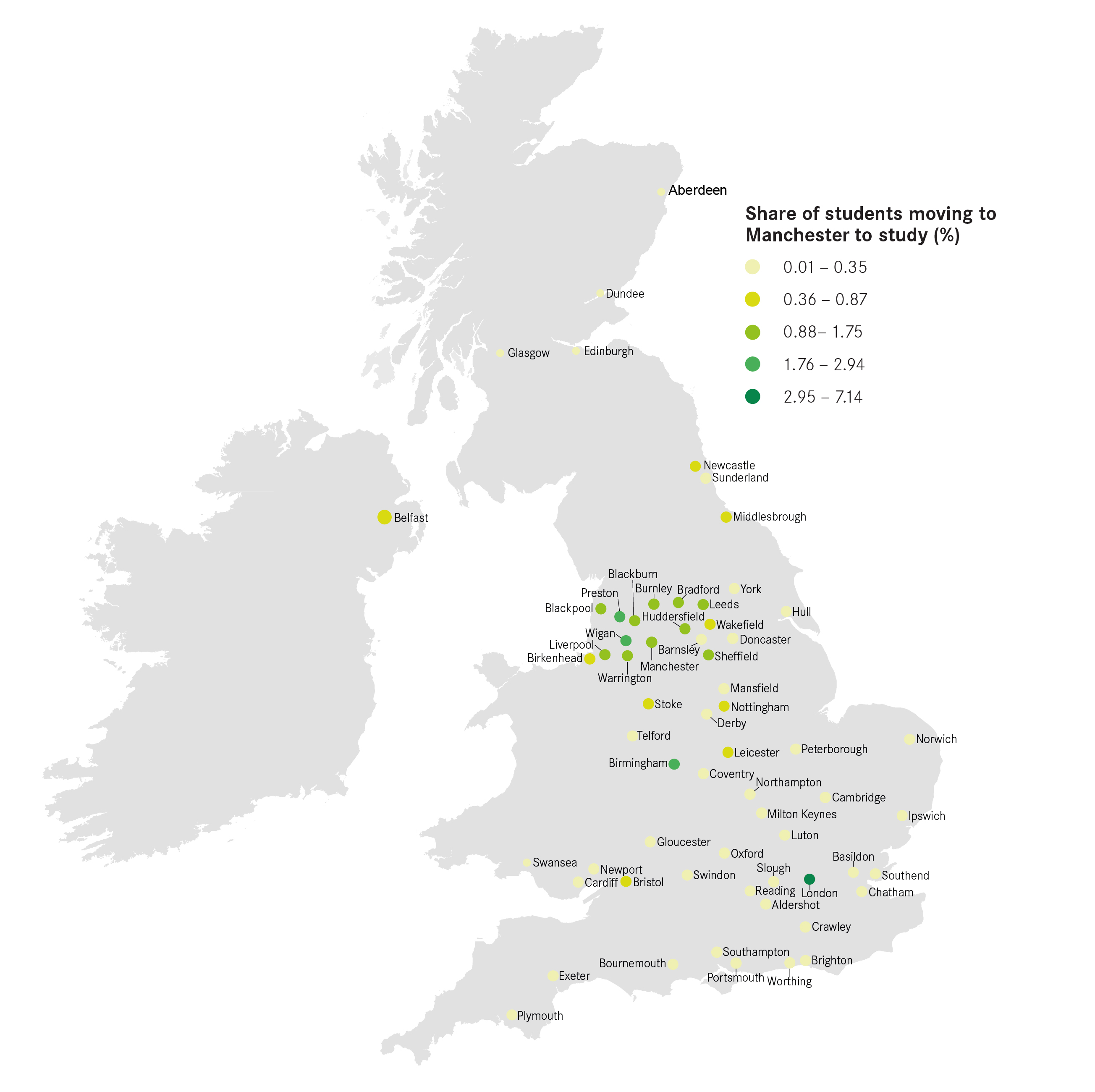 Figure 10: Origin of students at The University of Manchester, 2014/15 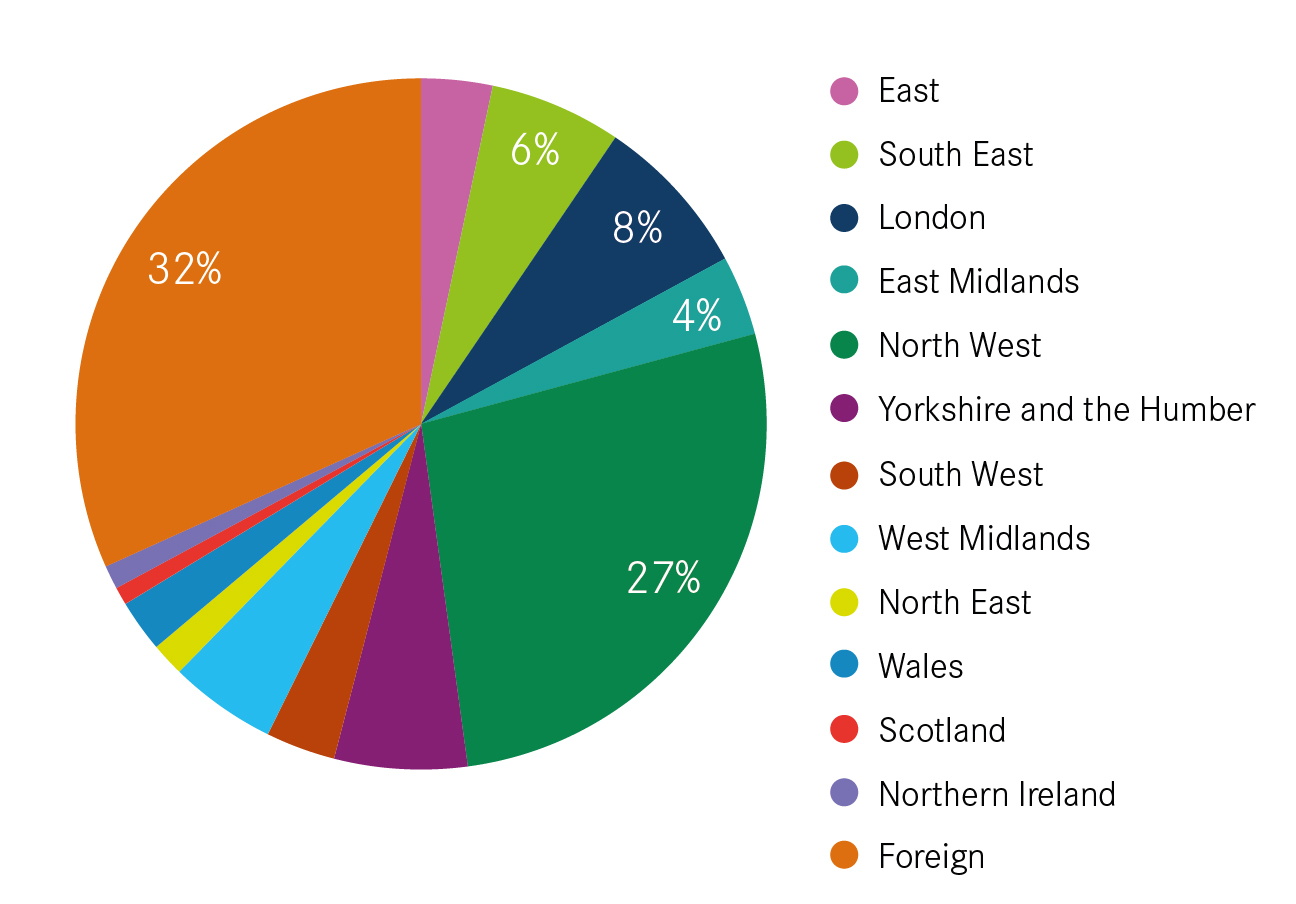 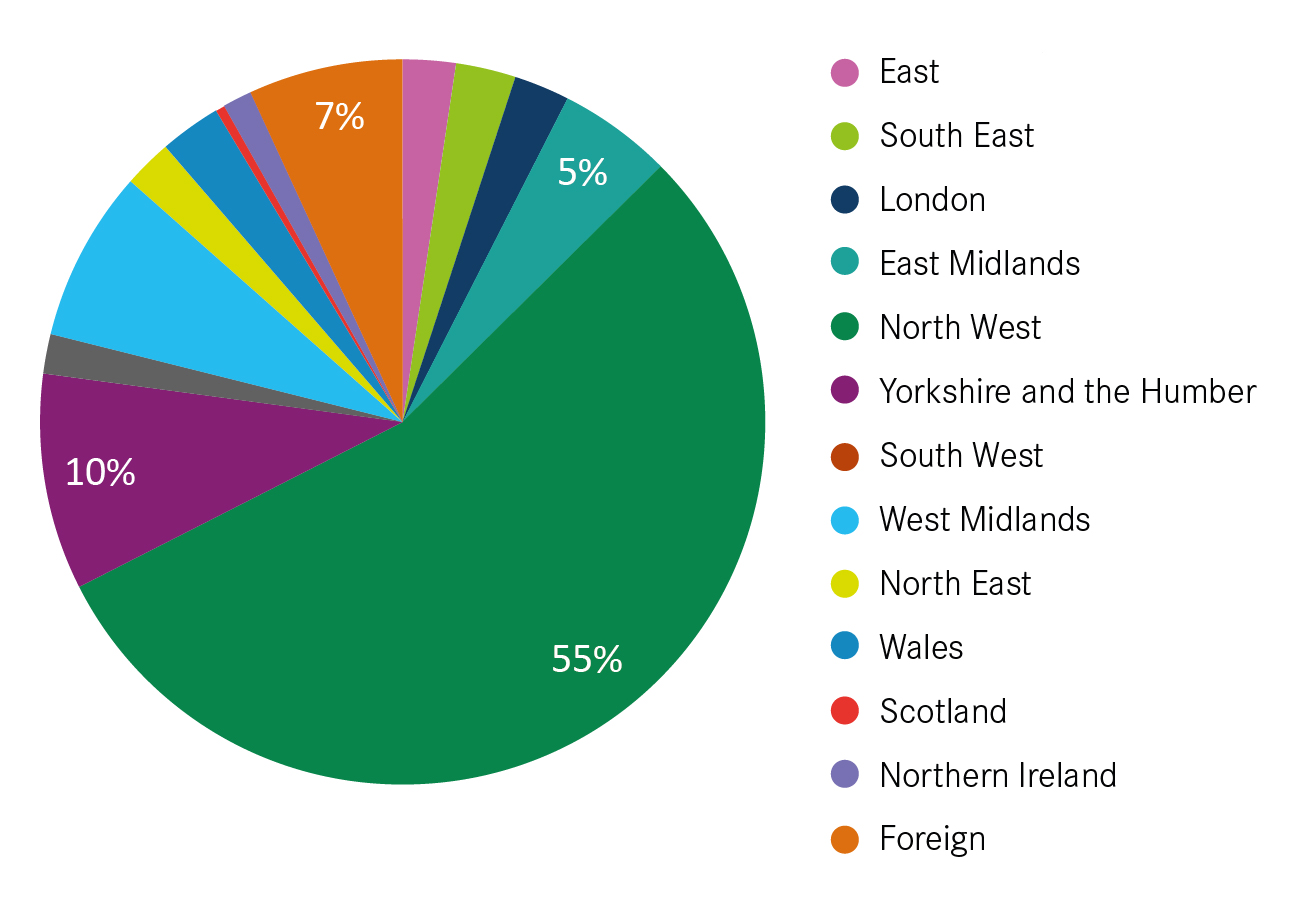 Figure 12: Origin of students at the Royal Northern College of Music, 2014/15 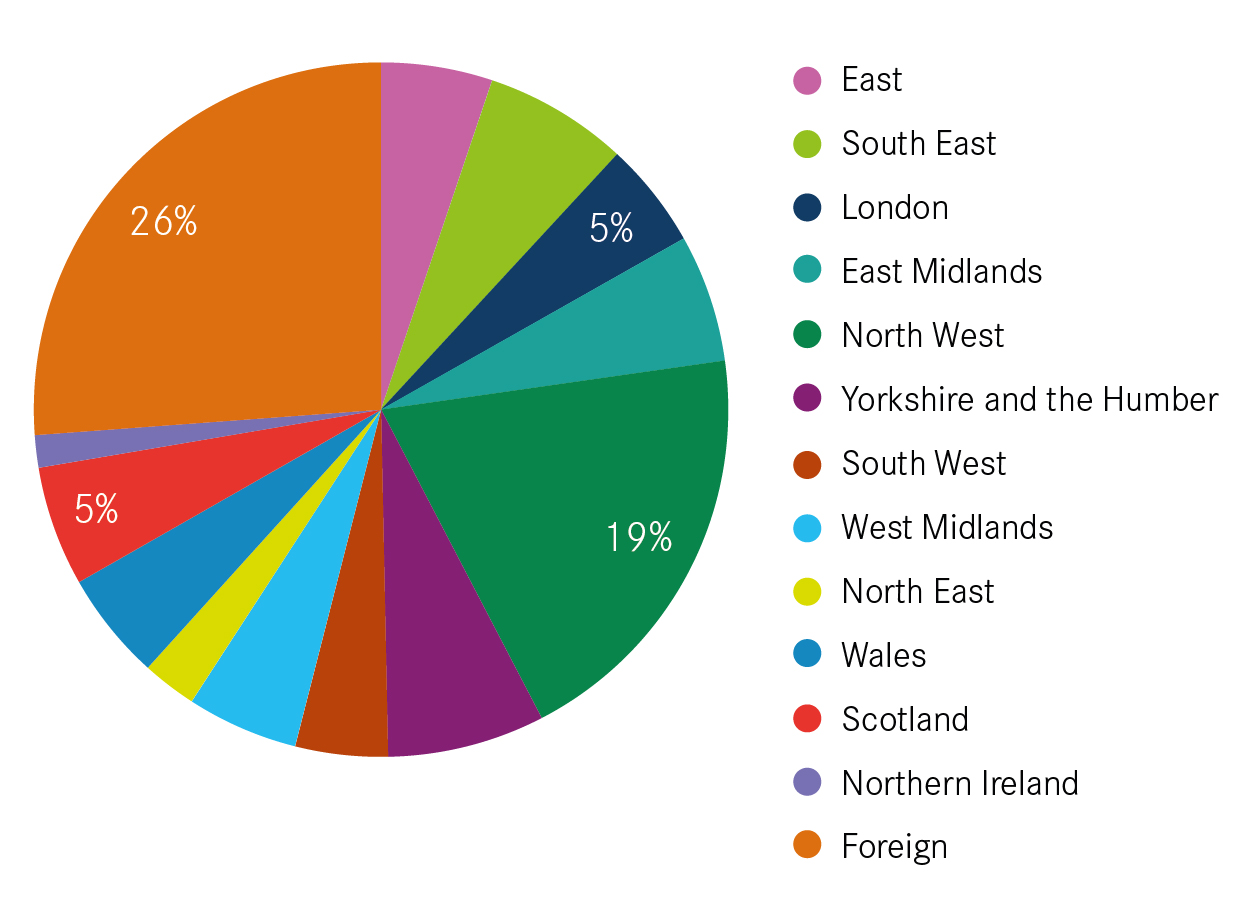 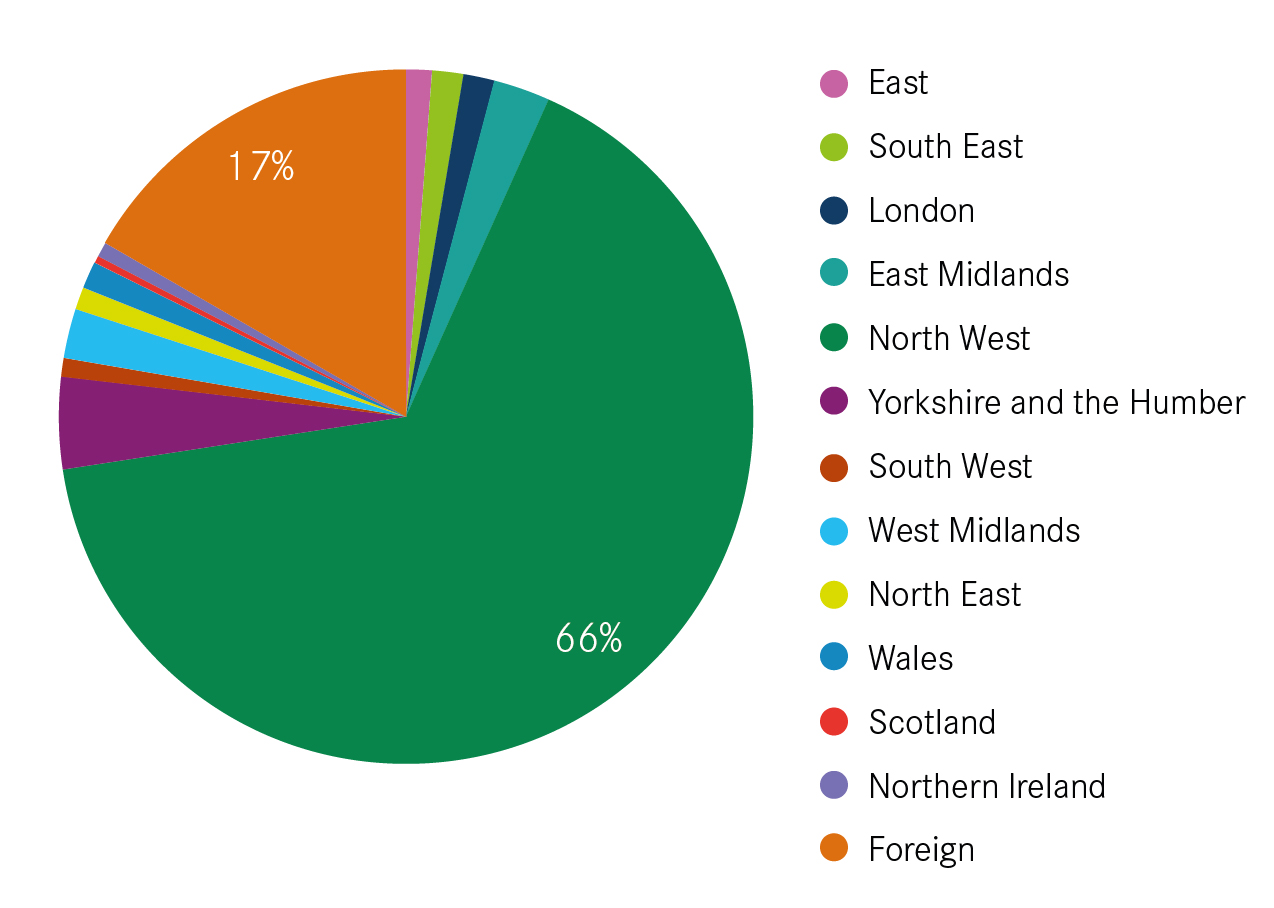 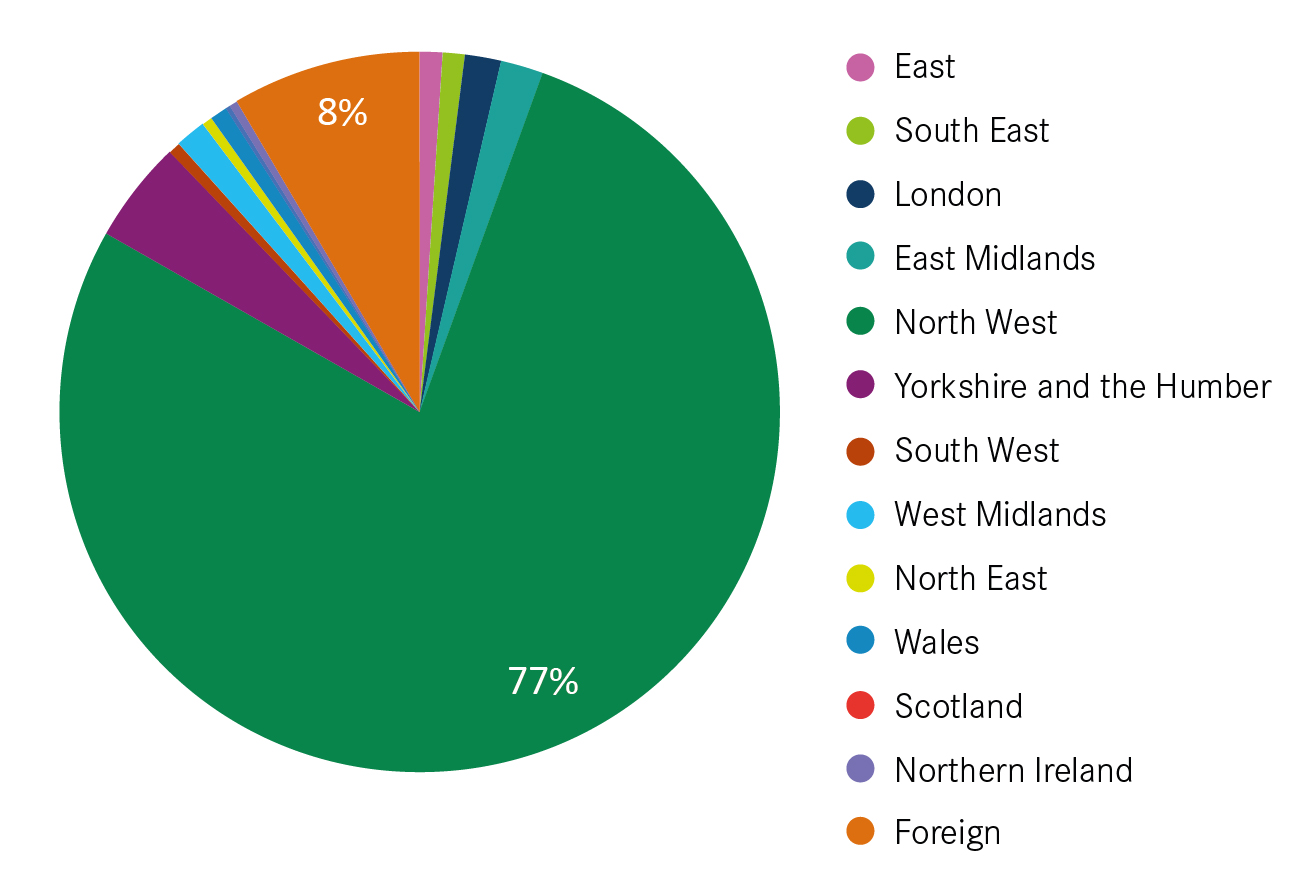 Of the 63,620 students originally from Manchester who went to university, 56 per cent studied away from their home city. A third of leavers stayed within the North West and 28 per cent went to university in Yorkshire, equivalent to 11,510 and 9,600 students respectively, as shown in Figure 15. The cities drawing most students from Manchester were Leeds (which attracted 10 per cent of students leaving Manchester), Preston (9 per cent) and Liverpool (8 per cent). As Figure 16 shows, the capital was also a popular destination with 5 per cent of Manchester’s students moving there for university.

Figure 15: Destination regions of those moving away from Manchester for university, 2014/15 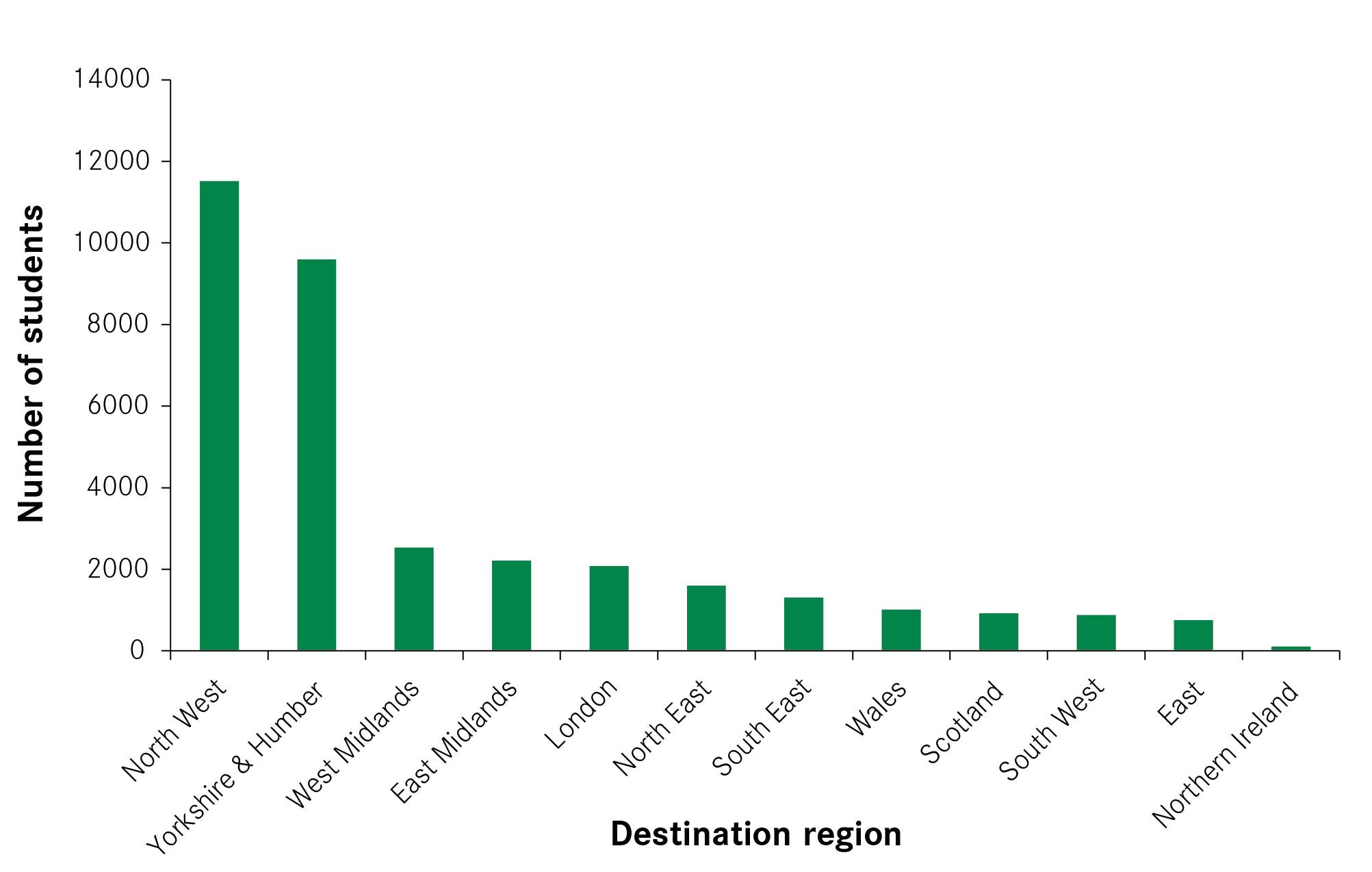 Figure 16: Destination cities of those moving away from Manchester for university, 2014/15 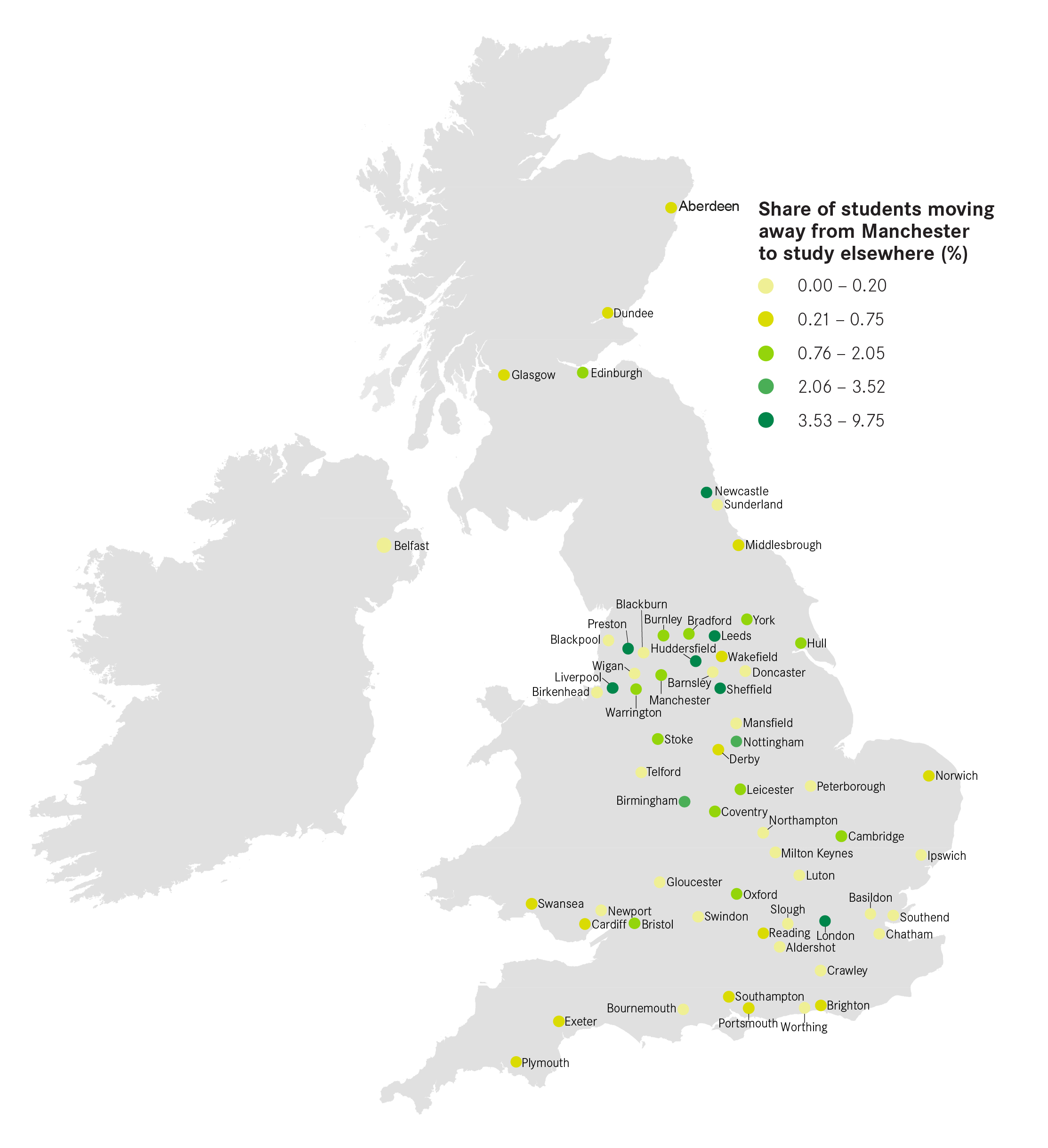 Reflecting the movement of young people seen in the previous section, many more students moved into Manchester for university than left to study elsewhere. In 2014/15 the net inflow of students to the city was 10,580; 45,910 students were from outside the city while 35,330 students at other UK universities were originally from Manchester. Despite this significant gain, many more university cities saw larger net inflows. In the same year Leeds gained 32,820 students overall, Nottingham gained 32,020 and Sheffield gained 28,010.

Manchester has a high retention rate compared with other UK cities

Manchester had the second highest retention rate of all university cities in 2013/14 – 2014/15, second only to London (see Figure 17): after graduation, 51 per cent of the city’s university students stayed for work.

So the universities with the highest retention rates both had a more locally-focused student base and relied on these home-grown students to achieve the higher levels of retention. This suggests that high retention rates are driven by the regional pull of a university, and by implication explains how the broader national and international pull of the University of Manchester and RNCM contribute to fewer students staying in the city. 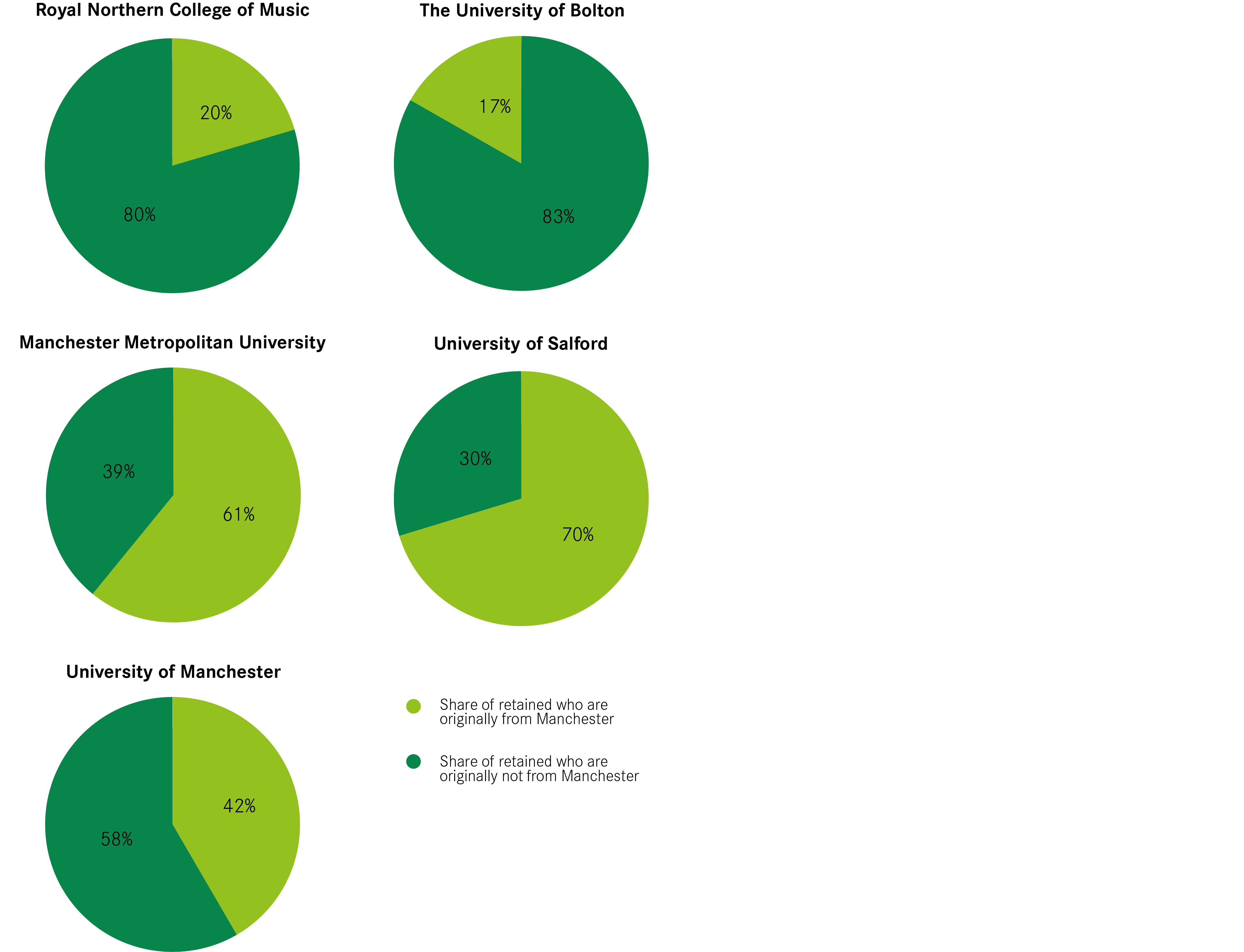 Retention rates also vary by subject studied, as Figure 20 shows. In Manchester, two-thirds of those studying Education stayed to work in the city compared with only 34 per cent of Medicine and Dentistry graduates. Other subjects with high retention rates were Law (57 per cent), Computer Science (57 per cent) and Social Studies (54 per cent). 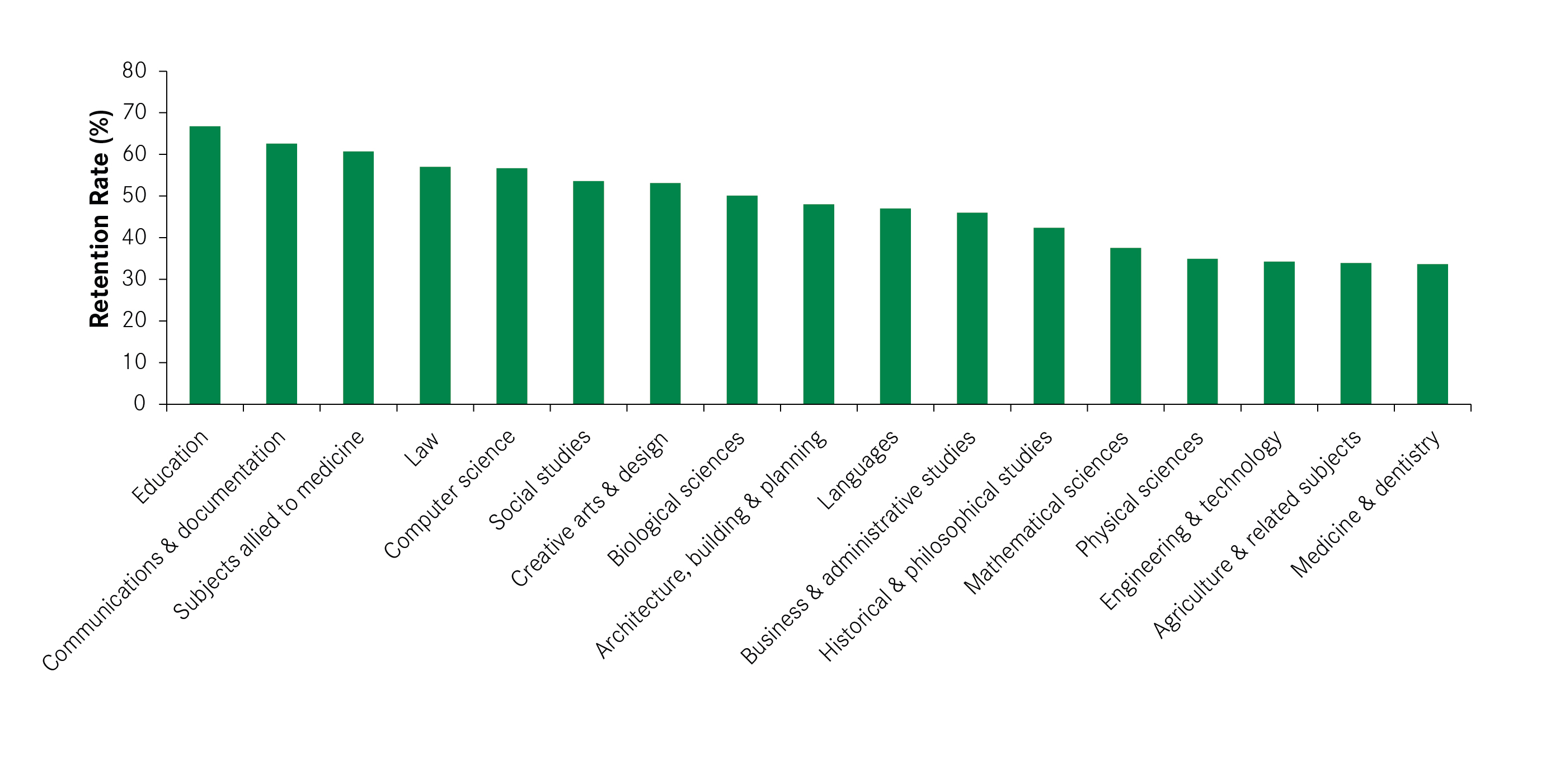 The most popular employment destination for graduates leaving Manchester is London

In 2013/14 – 2014/15, 21 per cent of Manchester graduates who moved away from the city for work chose to locate in London, as shown in Figure 21. The next most popular city destination was Liverpool, but only 4 per cent of graduates moved there for work, highlighting the dominance of the capital in graduate migration patterns. Many graduates stayed close to Manchester, with Wigan, Preston and Warrington each receiving 3 per cent of moving graduates. 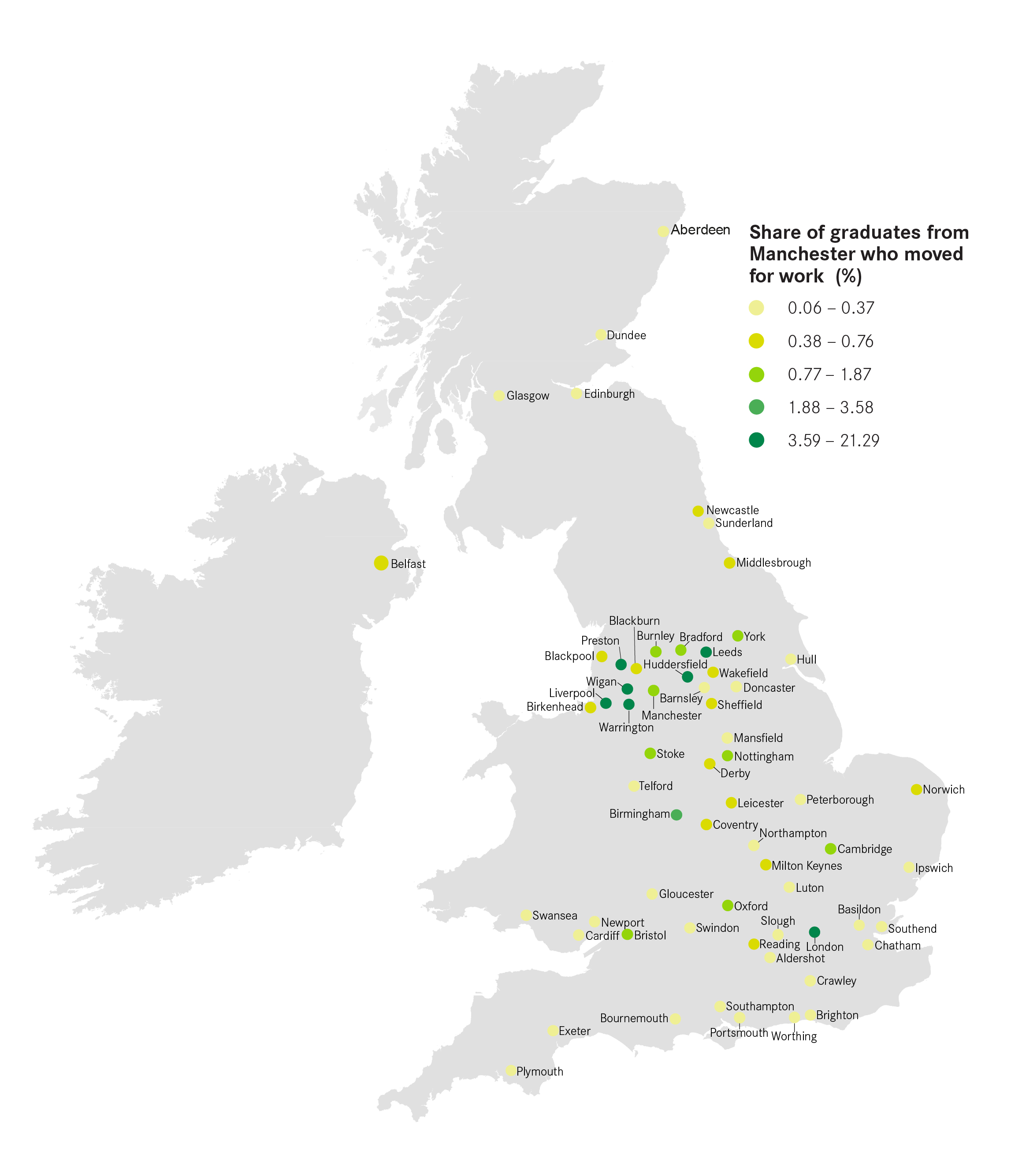 Manchester is very successful at attracting its home-grown students back for work. In 2013/14 – 2014/15, the city has the second highest return rate of all UK cities, only lower than London. Of those who left to study elsewhere, 57 per cent returned to Manchester for work. London saw 74 per cent of leavers come back, Belfast 57 per cent and Birmingham 53 per cent. In contrast, only 28 per cent of leavers returned to Mansfield on graduation and, in Aldershot, the figure was lower at 25 per cent.

As Figure 22 shows, there were 5,590 surveyed graduates who grew up in Manchester but left to study or work elsewhere. The city gained 10,250 of those surveyed from other parts of the UK, either when they moved into the city to study (and subsequently stayed for work), or when they moved into the city for the first time after university. This resulted in a gain of 4,660 of the graduates surveyed.

This was the largest gain of any UK city except London, which gained 42,070 graduates. Other cities similar to Manchester were Leeds and Bristol, which gained 3,690 and 3,190 surveyed graduates respectively.

This graduate gain may seem to contradict the earlier finding that there was a net outflow of young graduates from the city (see Figure 6) but this is because there is an additional cohort of students to consider. A significant number of Manchester’s students were ‘bouncers’, who were only temporarily in the city whilst at university. These students moved to Manchester for university but left straight after graduation to work elsewhere, and they are driving the outflow observed in the section above.

Of those who moved to Manchester for university, 67 per cent left became ‘bouncers’ by leaving after graduation. Figure 23 illustrates the size of this group: 9,840 surveyed graduates were ‘bouncers’ (shown by the ark green bar). This was a much larger number of graduates than those gained (shown by the light green bar), and so hides the fact that some students do stay on in the city to work.

Despite this large figure, Manchester has one of the lowest shares of ‘bouncers’ of all UK university cities. Rather than indicating an unattractive graduate job market, this figure instead highlights the national role the city’s universities play in educating graduates for work in many parts of the UK.