02The contribution of cities to economic and civic life

All parts of the UK make important contributions to the economy and to civic life. But the sizes of these contributions vary, with cities playing by far the largest role. Crucially, other areas also benefit from the role that cities play, as the activities generated in cities bring benefits both to those places around them and to the nation as a whole. These activities would not be so prevalent if not for the combination of density and scale that cities provide to support them.

Figure 1: The contribution of British cities 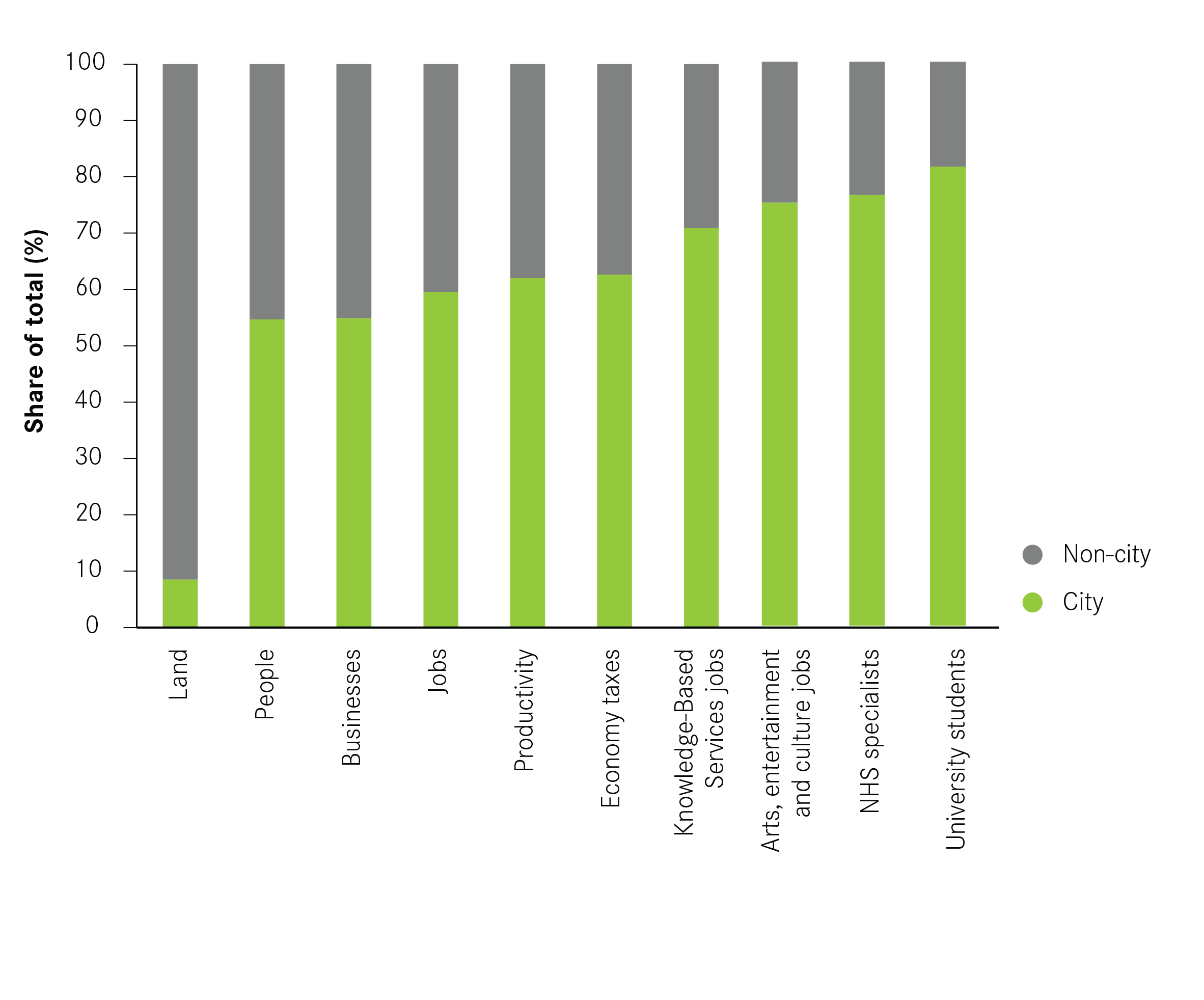 Figure 1 summarises the role that cities play in national economic and social life. This section will consider each element of this figure in turn.

Cities play an important role in the national economy and this influences the other roles that they play. British cities accounted for 9 per cent of the land, but were home to 55 per cent of businesses, 60 per cent of jobs and 62 per cent of output in 2016.

Cities are particularly important for the ability of the national economy to continue to specialise in ever more knowledge-based economic activity. Over 70 per cent of knowledge-based jobs were based in cities, and these jobs have increasingly been concentrating in cities.1 This is because of the benefits that cities offer to this type of activity, through a process known as agglomeration, which is discussed in Box 2.

Box 2: The benefits of agglomeration to exporting businesses

The clustering of the British economy into cities shows that firms are not ambivalent about where they locate, and that they are making clear choices. To understand why this occurs, it is important to understand what drives business location decisions.

Local services businesses – those businesses that sell to a local market, such as retailers, restaurants and cafés – locate close to that market. This means that they will mainly set up shop where there is a population centre, be that a village shop or a high street retailer. Place has little inherent role in their location decisions.

Exporting businesses on the other hand – those that sell beyond their local market, such as manufacturers, IT businesses and film production companies – are not tied to a particular place. Where they decide to locate depends on the relative benefits that a location offers.
Cities offer three key advantages to business over other areas:

There are a number of costs to being based in cities too, such as higher commercial space rents, congestion and pollution, which are not as large in non-city locations. Where exporting businesses locate in Britain depends on the trade off they make between the benefits and the costs.

For many businesses, particularly more highly-skilled service businesses (which tend to be more productive), the benefits of a city location outweigh the costs because the access to workers and knowledge that cities offer makes the firm more productive. For this reason, we see a number of these businesses clustering within city centres in particular. 25 per cent of high-knowledge service exporter jobs in England and Wales were based in a city centre in 2011, despite these locations accounting for just 0.1 per cent of land.

In contrast, manufacturing exporters tend to preference a suburban location in a city, or hinterland location around a city, due to their requirements for space combined with their needs to remain close to a large pool of potential employees.

Deep rural economies offer cheaper costs still. But fewer businesses locate here because they are unable to offer a sufficient pool of workers. For this reason the exporting businesses that are present in deep rural areas tend to be small firms.

The ability of different places to attract exporting businesses is important because of the impact on productivity. Not only are these types of businesses often more productive, but their ability to improve their productivity is much greater too. This has implications for wages and standards of living. The most successful economies in Britain in recent years have been those that have been able to attract higher-skilled exporting businesses.

The role of cities in the national economy has two main implications for places outside their borders. The first is that cities provide jobs for people beyond city boundaries. Around 22 per cent of workers living outside of cities were employed in a city in 2011, working in 2.4 million jobs. Section three will look at this in more detail for towns specifically.

The second is that this economic activity generates a disproportionate amount of tax revenue for the exchequer, which is then used to provide public services across the country. In 2013/14, cities raised £498 billion in tax on economic activities, which accounted for 63 per cent of total ‘economy’ taxes raised in the country.5

Spending, on the other hand, was much more aligned to where people lived. Cities accounted for 55 per cent of the population and 55 per cent of spending, demonstrating that public expenditure per resident was equivalent inside and outside of cities. The implication is that the greater tax-raising abilities of cities, because of the types of economic activity they are able to sustain, help to fund public services across the country. Box 3 looks at how tax raising and public spending differs within a city.

Box 3: Where tax is generated and public money spent within cities

Public spending is more spread across the city, representing the more even spread of population. While Nottingham local authority still had the largest share of spend, this was a reflection of its larger population, accounting for 48 per cent of all spend. 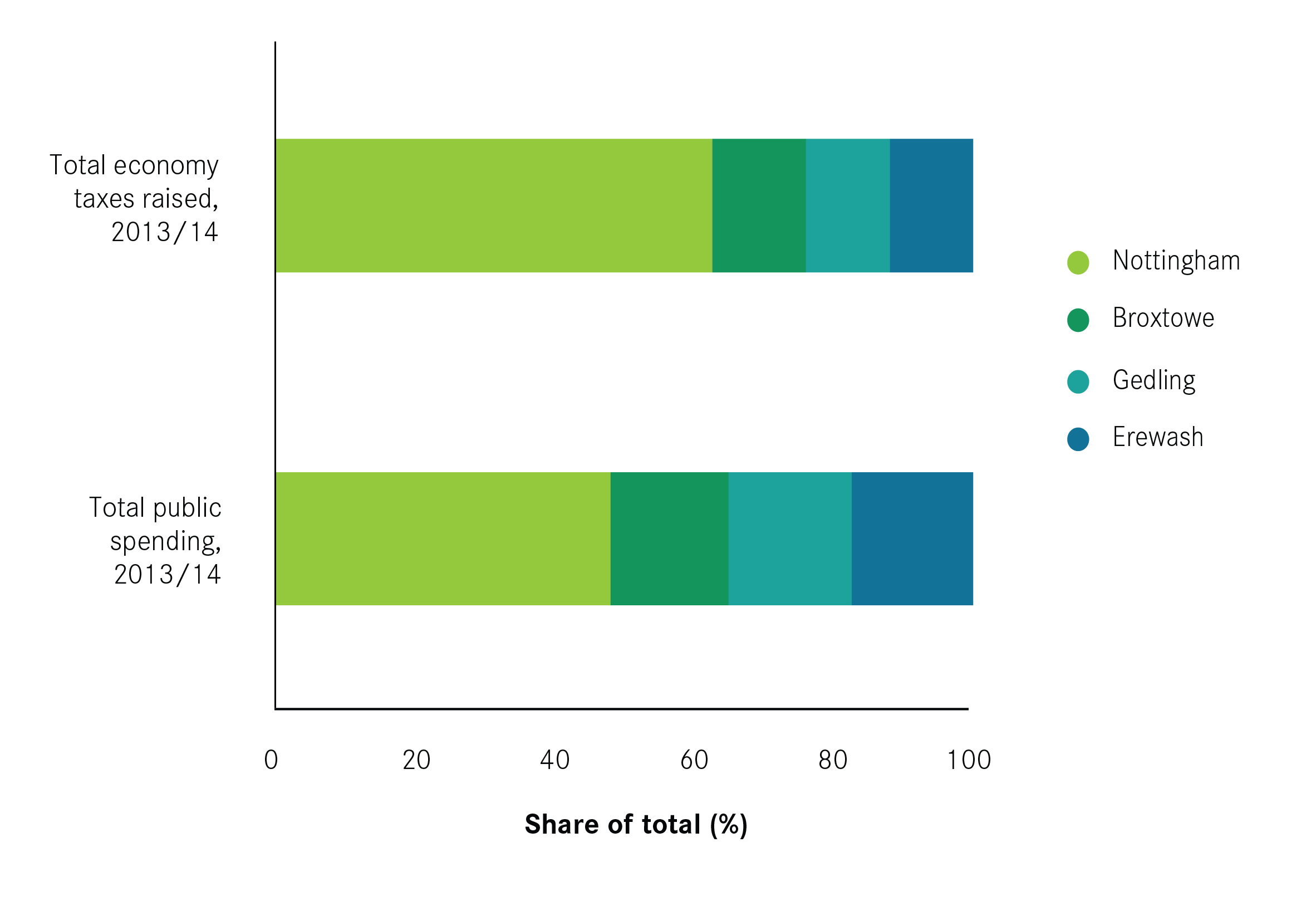 As well as generating taxes to fund public services, the concentration of activity in cities also allows them to support specialisation. This is particularly the case in healthcare and education. For example, 76 per cent of NHS consultants practised in cities.6 And 81 per cent of university students studied in cities.7

This density of activity also allows cities to support cultural facilities and activities, entertaining a wider audience than just city dwellers. Over 60 per cent of employment in restaurants and mobile food services were in cities in 2016, while three-quarters of all employment in creative arts and entertainment activities were located in a city.

Cities are also places for people to live, and as noted above, 55 per cent of the population chose to live in one in 2017. But this varies according to the stage of life that people are at. As Figure 3 shows, cities accounted for larger shares of younger people, especially those aged between 22 and 30. The opposite was the case for those aged 46 and over, with people aged over 65 most likely to live outside of a city.

Figure 3: Share of population living in cities by age, 2017

These patterns are shaped by the migration that we see around the country by people of different ages. As Figure 4 shows, for most age groups cities lose people to other areas, with the major exception being for those aged between 18 and 20. This is reflective of the city locations of many universities and the large inflow of university students into cities as a result.8 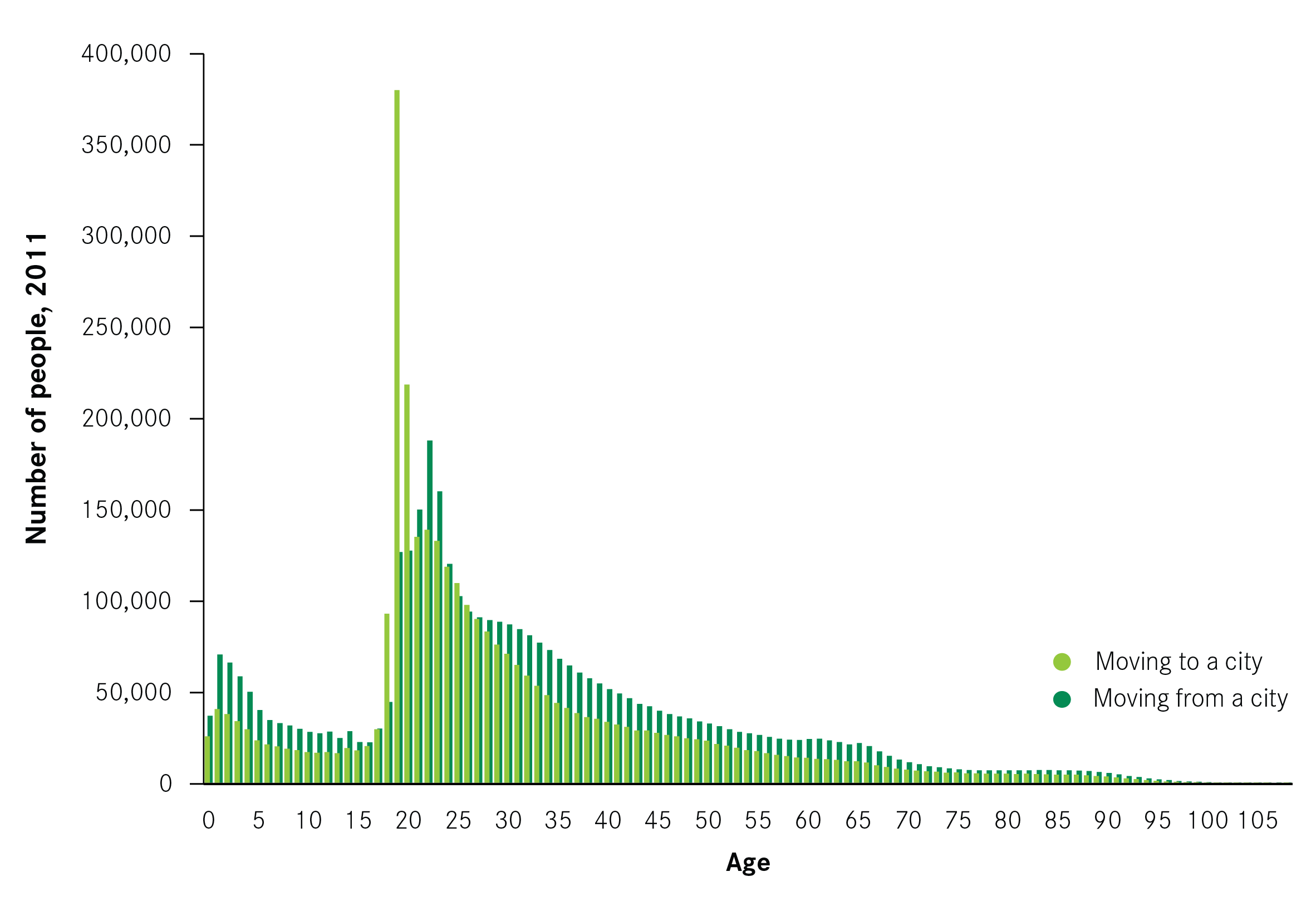 Breaking down migration by qualification gives further insight.9 Overall, 40 per cent of people aged over 16 who moved out of cities had a degree. And as Figure 5 shows, this varies with age. Cities see a net inflow of degree holders aged 22 to 30. But this trend is reversed for older age groups, with 31 to 45 year olds in particular moving out of cities.

The implication is that the older average agf non-city areas is not just driven by a loss of young people to cities – it is also the inflow of older people from cities too, with many of them being degree holders.

The decisions people make about where they live results from their changing attitudes towards different amenities as they get older. Previous research by Centre for Cities has shown that the main drivers of city and city centre location decisions in particular are access to jobs, transport and amenities such as restaurants and shops, which are traded off against having a smaller living space, exposure to higher levels of pollution and a lack of access to green space. But as people get older, access to amenities such as schools and green space becomes more important, and so a suburban or non-city location begins to appeal more.10

Figure 5: Migration of degree holders from and to cities, 2011 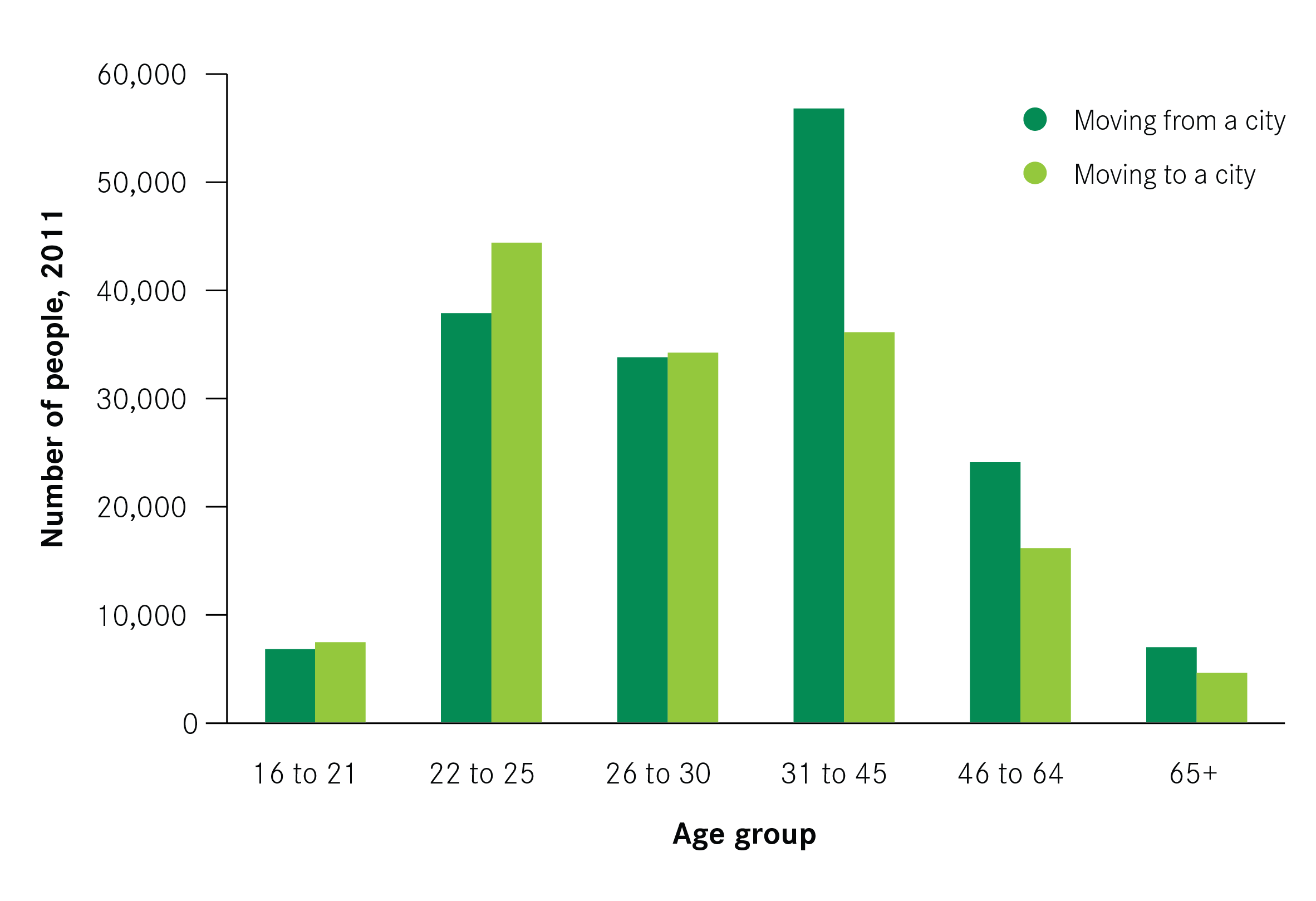 As Centre for Cities has set out across all of its research, not all cities are able to provide the same levels of tax generation, knowledge jobs or leisure activities set out above. From an economic perspective, cities in the South, and in the Greater South East in particular, perform much more strongly on a number of measures than those elsewhere. Cities like Bristol and Reading have stronger economies than cities such as Middlesbrough and Liverpool. The underperformance of these cities is bad not only for the people who live there, but bad for the national economy too, as these cities do not make the contribution that they should.

In looking at the direct links between cities and their surrounding areas, the next section will show that this underperformance is also bad for the towns around these cities.