03The evolution of the business support landscape

In 1992 Business Link was established as a ‘one stop shop’ for business support, and replaced a number of services which were considered too dispersed including the then Department of Employment’s ‘Small business development service’. At its peak, Business Link engaged with business through 89 regional offices employing 650 personal business advisers. In 2005 the administration of Business Link services was transferred to the RDAs, and Business Link itself switched to an ‘Information, Diagnosis and Brokerage’ model. Most RDAs chose to contract business support delivery out to private companies.1 RDAs were also responsible for initiatives relating to innovation, inward investment and skills which were outside the remit of Business Link. Increased devolution of business support to the regional level led to the total number of programmes reaching 3,000 by 2006.

In response to concerns about proliferation of initiatives, the Labour Government launched the Business Support Simplification Programme (BSSP). Although it was set a target of reducing the number of schemes to 100, interviewees suggested that it simply repackaged and rebranded existing support initiatives into product strands.

Further changes to the support landscape occurred after the Coalition Government came to office in 2010. The abolition of RDAs meant that many regional schemes lost their primary source of funding. As a result, by 2012 the total number of business support initiatives had dropped to 900.

Upon abolition, the responsibilities of the RDAs were split between various government departments, non-government bodies, local authorities and LEPs (Figure 2). While the total number of initiatives was reduced, the abolition of Business Link and the announcement of multiple niche programmes administered by different government departments meant that it became much more complicated to navigate the support that was available. 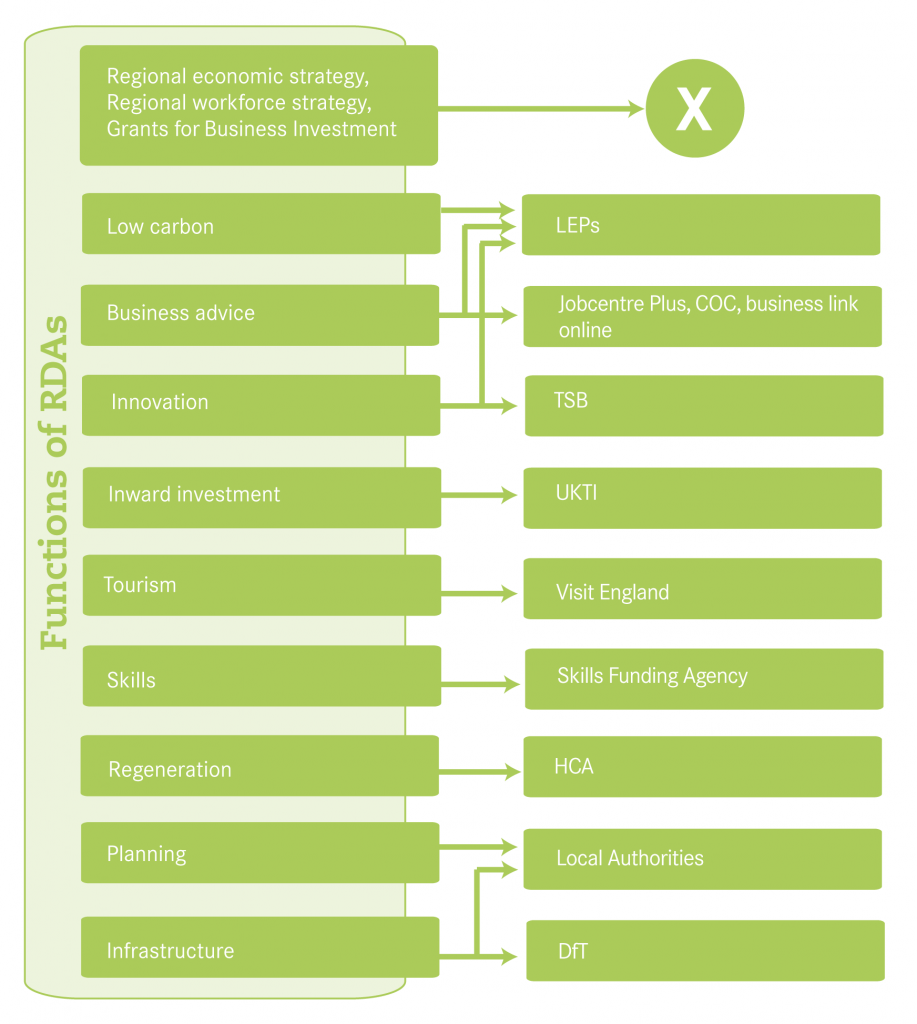 After the RDAs were abolished, the Government introduced Local Enterprise Partnerships (LEPs), set up as joint public and private sector bodies to shape local economic policy including certain aspects of business support. The role of LEPs is still developing and changing, and their effectiveness in addressing the needs of local businesses is still unproven.

Interviewees identified various gaps in the current system and focused on different flaws that should be addressed. All of them agreed on one point, however – the current system lacks structure and is difficult for businesses to navigate.