Some other cities instead build far more on their outskirts and much less in their city centres than average. At the other end of the spectrum to Brighton, Wakefield has supplied far more new homes since 2011, and it has much more affordable housing, with the average house costing seven times the average income. But this affordability appears to be primarily driven by low demand for housing in Wakefield, due to the city’s underperforming economy.

Wakefield adds new housing in a manner distinct to Brighton. The city centre in Wakefield in Figure 3 is on the left of the map, and saw housing stock increase by only 10 per cent since 2011, less than the average of 16 per cent for city centres. But despite low supply in the city centre, new suburban extensions are providing so many new homes that the city’s total housing stock has grown by 8 per cent, faster than the national average of 6 per cent.

Lots of new houses are being built on greenfield sites. These includ new large urban extensions on the outskirts of existing settlements, which predominate in the larger neighbourhoods on the map which were less developed in 2011.

There are also smaller infill developments filling in the gaps between Wakefield’s numerous small towns. Some of these new homes are adjacent to the urban core around the city centre towards the left of the map, but mainly they appear to be close to the motorway junctions on the M1 and M62. Others are located nearby railway stations, but not all stations (eg South Elmsall in the south of the map, or Sandall & Agbrigg).

The large parts of the existing, built-up suburbs of Wakefield see almost no new construction. 34 per cent of the city’s suburban neighbourhoods have built less than one house each year since 2011. Even though this is one of the lowest shares of low-building in the existing suburbs of any city – perhaps driven by the smaller infill developments in-between Wakefield’s smaller towns – it still means 1/3 of the city is experiencing very little new supply, especially demolition and redevelopment. That the neighbourhoods which have built no houses at all are some of the smallest on the map suggests that there is little redevelopment of the existing, built-up suburban area.

Figure 3: Where Wakefield has built new homes since 2011 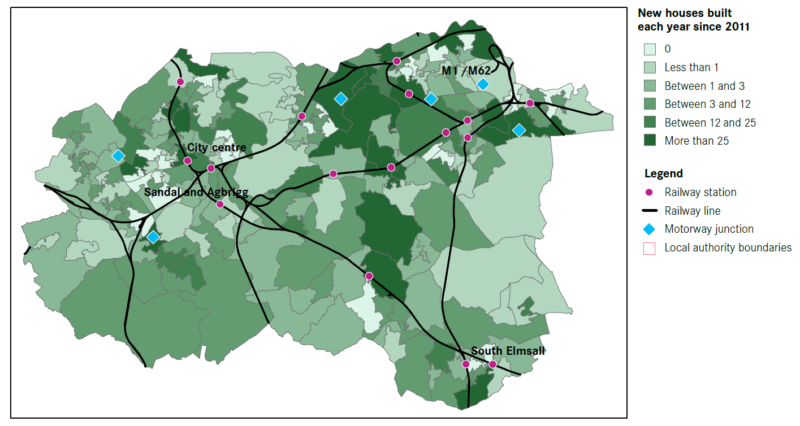 This pattern of little redevelopment of the city centre and the existing suburbs alongside large urban extensions and significant greenfield development does resemble the expected pattern of housing supply in cities with low land values such as Wakefield. If land values are low, then private developers will struggle to finance the construction costs of redevelopment without an intervention from the public sector. Furthermore, there is little incentive for residents to save money by using less land and living at higher densities.

And yet, even though Wakefield is a lower-demand city, as shown by its low land values, it supplies far more new homes than Brighton, a city with higher-demand.

Places with low land values and a similar trend of considerable greenfield supply on the outskirts and little elsewhere include Sunderland, Barnsley, and Mansfield. While the conditions of each area is different and each site is unique, it is plausible to consider whether new developments and extensions closer to the urban core could reduce commute times and demands on infrastructure in these cities.

A number of New Towns, including Milton Keynes, Peterborough, and Warrington appear to consistently experience a variant of this pattern, despite having very different affordability issues from each other. These New Towns are characterised by very high housebuilding on the outskirts and very little or no development of the existing suburbs and the city centre.