06Manchester – a large city, with many local authorities

In contrast, some of the largest cities like Manchester in Figure 5 are seeing a concentrated boost of new homes in the city centre. The number of homes in Manchester city centre has increased by 25 per cent over this period. Neighbourhoods which are technically in the suburbs but immediately adjacent to the city centre, such as in Salford and Hulme, can also be seen to have added many new homes – potentially reflecting an outwards expansion of Manchester’s city centre since 2011.

Figure 5: Where Manchester has built new homes since 2011 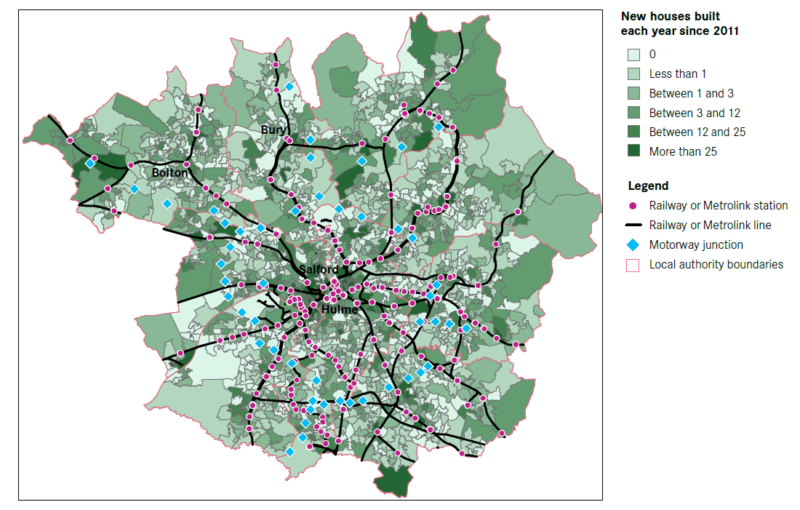 This map shows Manchester PUA, rather than Greater Manchester, as Wigan is a separate urban area.

But despite all this new development, Manchester’s housing stock has actually increased by less than the urban average of 6 per cent – just 5 per cent. This is because even though the city centre is rapidly building new homes, Manchester’s suburbs are building very little. Across all of the suburbs of Manchester the total number of homes has increased by only 4 per cent, even including those new high-rise residential buildings which are technically in suburban neighbourhoods adjacent to the city centre.

Manchester’s suburbs build very little for two reasons. First, like Brighton, there is comparatively little housebuilding on the outskirts of Manchester, perhaps due to the city’s tight Green Belt. Unlike Exeter therefore, Manchester does

not experience many concentrated areas of greenfield development, which makes it difficult for the city to provide enough new homes. That Manchester’s supply of new homes is primarily going to be delivered in the city centre with little development in the existing suburbs and outskirts has been confirmed to continue under the Greater Manchester Spatial Framework, which is being agreed between the local authorities and the metro mayor Andy Burnham.7

Second, this lack of supply on the outskirts does not result in a more general densification of the built-up area. Some 56 per cent of the suburban neighbourhoods in Manchester have built less than one house each year since 2011. 28 per cent have built no new homes at all. Even though one of the objectives of the Green Belt is to recycle “derelict and other urban land”8, large parts of Manchester experience little or no new recycling of their land, despite the success of Manchester’s urban economy in recent years.

However, one thing that distinguishes Manchester’s experience from smaller cities is that there are pockets of higher-density supply in the city’s suburbs. These are in local centres such as Bolton and Bury within each local authority in Greater Manchester with good transport links to the rest of the city, similar to the supply concentrated in Shoreham town centre in Adur local authority in Brighton in Figure 2. These pockets resemble little city centres of their own – booms of high-density construction surrounded by very little new supply across the rest of the suburbs. Each district local authority currently has its own housing target and must provide some new homes, which are evidently being allocated in town centres in Manchester. Similar patterns of supply are also seen in Liverpool and Birmingham.