The most expensive cities in the UK face a severe housing shortage. Solving this housing crisis by building more homes is crucial to reduce the pressure housing costs put on residents and public services, tackle growing inequality within cities and across the country, and grow the national and local economy.

Yet strangely, some of the most unaffordable cities such as Oxford or Bournemouth are building fewer new homes than cities where housing is less expensive such as Barnsley or Peterborough, as Figure 1 shows. Some expensive places, such as Cambridge are building new homes at a rapid rate, while others with lower demand such as Blackburn are supplying very little, as might be expected. But in many other cities, supply and demand appear unconnected. This weak link between the local supply of and demand for new homes results in housing shortages in many cities with successful economies.

Figure 1: Cities’ housing supply since 2011 and their housing affordability in 2011 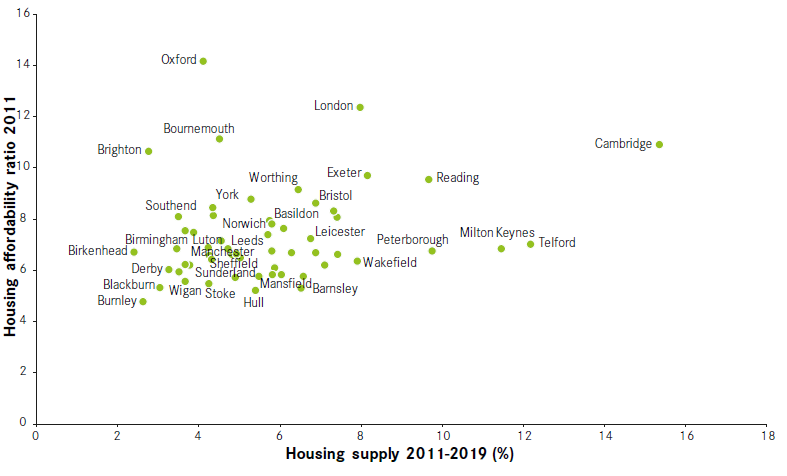 The systemic mismatch between new supply and demand for housing in cities in Figure 1 appears to be caused by how the planning system rations the supply of land for development.1 Exactly why some cities where demand for new homes is high, such as Brighton, build few new homes while some lower-demand cities, such as Wakefield, build far more remains poorly understood.

Individual cities each have characteristics that can make building new homes more or less difficult, such as the boundaries of the local authority, the terrain and coastline, the Green Belt, national conservation designations, and the urban form of existing settlements. These local conditions can constrain new housing supply within cities, but they cannot explain any of the systemic factors or policy choices which are consistently decoupling new supply from demand in Figure 1.

If the planning system is altering how many new homes are built in cities, then it could be doing this by shaping where housing is, or not, built within cities. By looking within cities to identify where new homes are and are not being built, it

becomes possible to explain how planning systemically disconnects supply from demand across different cities and how reform can reconnect them and address the housing crisis.

This report sets out how the planning system shapes the pattern of new supply within cities, and is divided into four parts: