Expensive cities which supply lots of homes build in their city centres and in their outskirts, but noticeably less in their existing suburbs.

Exeter is one of the most expensive cities in the country, but unlike many other cities facing a housing shortage, it has built a great many homes since 2011, with total housing supply growing by 8 per cent. Supply is better linked to demand in Exeter than in other unaffordable cities like Oxford or Brighton, and in cities with lower demand such as Wakefield. As a result, Exeter is more affordable than it would otherwise have been, and will remain so over the longer term.6

The pattern of new supply in Exeter is shown in Figure 4. The city centre can be seen to providing some new homes, and housing supply there has increased by 8 per cent. But the bulk of supply – 70 per cent of new suburban homes – has been delivered not just in the outskirts, but a particular section of the outskirts towards the right of the map, near the recently opened Newcourt railway station and Exeter’s motorway junctions inside the local authority. These higher-supply neighbourhoods on Exeter’s outskirts, amounting to 10 per cent of the suburbs, are essential for Exeter’s overall housing supply given its housing target, as in Wakefield and implicitly so in Brighton.

Figure 4: Where Exeter has built new homes since 2011 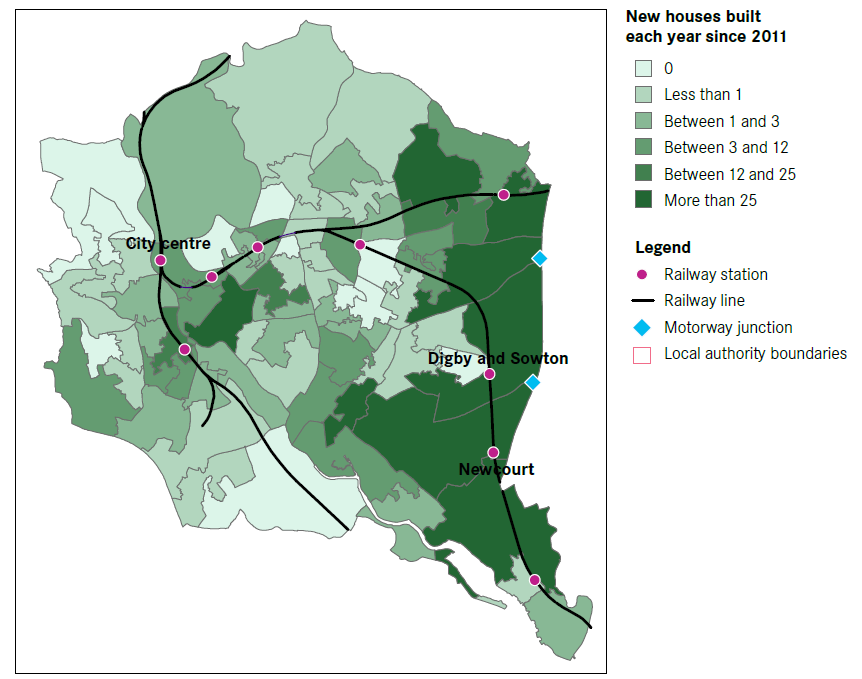 However, supply is still concentrated on parts of the outskirts of Exeter and in its city centre. This is perhaps because, unlike those areas in the east of the city which are supplying lots of new homes, the rest of the city may not currently have the existing or new infrastructure capacity to support as much new housing. Nevertheless though, 48 per cent of suburban neighbourhoods in Exeter are building less than one house a year, and 14 per cent of suburban neighbourhoods in Exeter have built no new houses over this period, including a built-up area close to Digby & Sowton station.

Exeter and other high-demand places such as Reading or Cambridge, which are rapidly building new homes relative to other expensive cities, will need to keep supplying more homes to ensure housing costs are stable over the longer run. But as their outskirts are quickly filled with new homes, their ability to deliver more homes in their existing suburbs will become more important to keep local housing costs under control.