The Industrial Strategy White Paper, published in November 2017, announced the government’s intention to work with the Mayoral Combined Authorities (CAs) and Local Enterprise Partnerships (LEPs) to develop Local Industrial Strategies. The broad view is that these strategies should aim to ‘boost productivity, earning power and competitiveness’ by identifying ‘priorities to improve skills, increase innovation and enhance infrastructure and business growth’.1

The government is currently working with three ‘trailblazer’ areas – Greater Manchester, the Oxford-Milton Keynes-Cambridge corridor and the West Midlands – to co-design and develop the first Local Industrial Strategies (LIS) and aims to agree these by March 2019.

It is not clear yet what the process following the agreement of the three trailblazer strategies will look like, or indeed whether all areas will agree a LIS with government. The White Paper states that government will ‘prioritise areas with the potential to drive wider regional growth, focusing on clusters of expertise and centres of economic activity’.

Beyond the broad policy areas mentioned above, government has also avoided being overly prescriptive about what should form the contents of a LIS, opting instead to take a more tailored approach. As we have highlighted previously, variation across cities, with them all facing different challenges and opportunities, means that it is impossible for central government to prescribe an industrial policy that works for all places. They need to be tailored to work.

Other parts of the country have already begun thinking about what the Industrial Strategy means for them and what might constitute a local strategy as part of the government’s flagship domestic policy. And while there are no formal plans in place as yet, CAs and LEPs are being encouraged by government to establish what their priorities are. This is a worthwhile exercise, even in the eventual circumstance that the government does not agree a LIS with all areas, as these priorities can be used to guide broader approaches to local economic development for bigger impact.

While some places might use their Strategic Economic Plan (SEP) as a framework, places need to ensure that their LIS is more focused and action-driven. For CAs and LEPs leading on the development of LISs that means establishing clarity on what the Strategy is trying to achieve and what their main priorities are within it.

It is in this context that this briefing paper draws on the Centre for Cities and the What Works Centre for Local Economic Growth evidence to explore the issues that cities and their partners should bear in mind through the decision-making process.

1. Make the case for cities as the main hubs of economic growth

With LISs set to cover the broader geographies bounded by CAs and LEPs, it is important that partners within those areas prioritise policies in a way that reflects the economic role that cities play, as well as the interdependencies between these urban cores and their surrounding areas.

Figure 1: Workplace population in England and Wales by MSOA, 2011 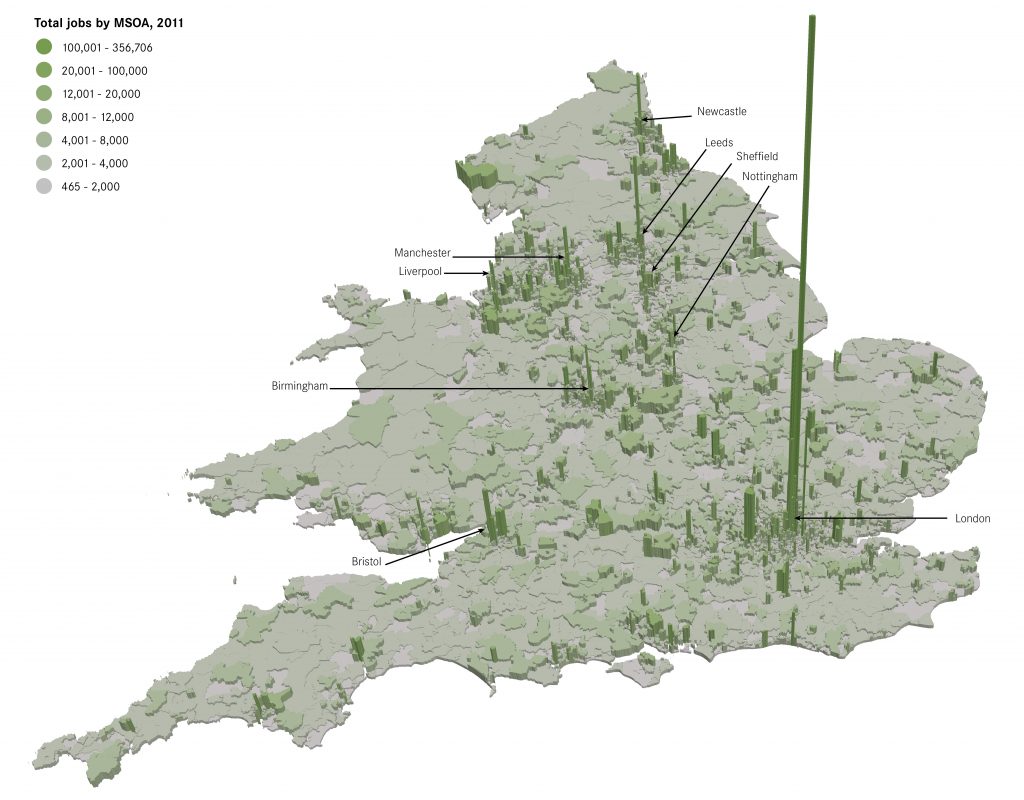 But cities are not islands. On a basic level, reflecting this concentration of economic activity, cities provide opportunities for workers living elsewhere in the wider city region and the wider city region offers places for people to live. The exact nature of these relationships will vary across CAs and LEPs as some form one large conurbation (Greater Manchester CA, for example), others have more than one economic centre (Cambridgeshire and Peterborough CA, for example) or one smaller town/city within a predominately rural area (Greater Lincolnshire LEP, for example). These interdependencies are often evident in commuting patterns (see Figure 2). 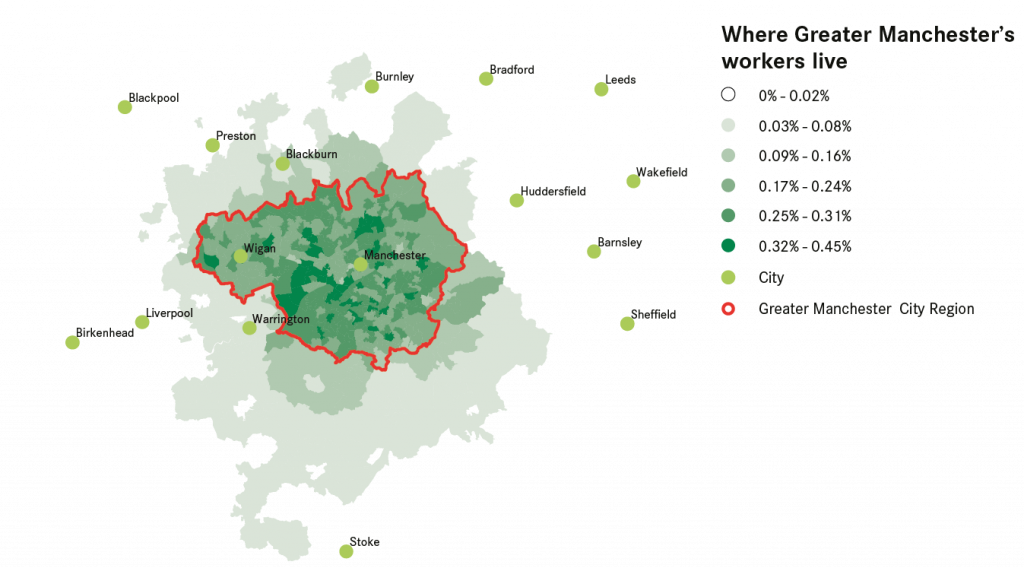 CAs and LEPs should avoid ‘jam-spreading’ and prioritise investment and interventions that reflect the role that cities play and these economic interactions. For example, it may be appropriate to prioritise the development of commercial and incubation space in a city centre, while investing in transport infrastructure or employment training that connects surrounding towns and suburbs into these areas of economic opportunity.

2. Identify the opportunities to unlock growth

Sectors will be a key feature in the development of industrial strategies with sector deals being done at the national level and places being encouraged to identify their distinctive comparative advantage or ‘leading sectors’. Past strategies have succeeded to greater and lesser degrees in identifying areas’ distinctive strengths and assets but this alone is not sufficient justification for public sector intervention – or in identifying the most effective ways to unlock growth. Having a large number of firms in the creative industries or health, for example, tells you little about the case for intervention.

Places need to get under the skin of firm-level decisions and develop a more granular level understanding of sectors – and crucially where the assets and barriers to growth lie. Assets may include universities and other local institutions, local partnerships, specific expertise or concentrations of activity, while barriers may include skills shortages, lack of appropriate business space and lack of coordination between complementary businesses. These barriers may well be common across in different industries at the local level – and removing them can support growth across a range of sectors, encouraging the knowledge spill-overs, innovation and new activity that the Industrial Strategy ultimately aims to achieve.

Government expect CAs and LEPs to consult widely and put forward a strong evidence base to support their priorities. Identification of where these barriers lie will be part of the process in setting out the rationale and evidence base for intervention.

3. Consider how the national and global economiesare evolving

Partners should seek to support new activity and growth, responding to changes in the global market, rather than trying to revive shrinking sectors. This is more likely to support growth over the longer term. For example, while there may be justification for supporting growth of specific activities within manufacturing, the sector as a whole has been declining in employment terms over the longer term.3

Demand for skills has changed with these economic shifts. The general shift, as highlighted in Cities Outlook 2018, has been towards increased demand for interpersonal and analytical skills.4 Individuals with these skills are likely to find it easier to adapt in the changing economy and access employment opportunities. Nurturing these types of skills is also likely to support business and productivity growth.

4. Map out the available levers and mechanisms

Cities and local partners will also need to consider what levers and mechanisms are available to them to be able to deliver on their priorities. This will obviously include existing powers and investment levers available to local authorities, CAs and LEPs but partners should also consider how to take advantage of the other opportunities offered by the industrial strategy. This includes several of the funds referred to in the White Paper:1

These funds do not necessarily represent new money and some are relatively small scale. While the timings will also differ from the development of LISs, cities should consider how they might use them to invest in their priority interventions.

National investments made through the Grand Challenges and sector deals will also have an impact in different parts of the country. The second wave of the Industrial Strategy Challenge fund was announced in February with £725 million to invest between 2018 and 2019 in the four Grand Challenges: artificial intelligence and the data economy, clean growth, the future of mobility and meeting the needs of an ageing society.6 Sector deals have also been agreed for life sciences, construction, artificial intelligence and the automotive sector.7
While these are primarily deals with industry and universities, there may also be opportunity to package interventions around these investments – linking sector interventions with academic and skills interventions, for example – with the aim of maximising their impact on local growth.

Money is important but how cities marshal existing resources is what really matters. With no template, it is unclear whether places will be given additional powers, autonomy and money to deliver their plans. The emphasis instead seems to be on finding new ways of working and coordinating between local and national government.

Partners should aim to influence national government spending decisions through the development of LISs that speak to both the priorities of the local area and government’s agenda. Experience from the city and devolution deals demonstrates the importance of defining what is meant by terms like ‘co-design’ and ‘co-commissioning’ and applying political pressure to ensure that these types of agreement lead to meaningful change. It will also be important for local authorities to find new ways to deliver policies and work with other local stakeholders, including: the private sector; schools, colleges and universities; other local public sector institutions; and the third sector. National initiatives and organisations such as Be the Business and Innovate UK may also be able to provide support. Both are engaged in a new programme, New Business Basics, to test and encourage SMEs to adopt technologies and practices.

Experimentation needs to be accompanied by evaluation. It is important in terms of both learning from past experience to support the case for investment, and monitoring and evaluating the impact of new approaches.8

6. Identify where cities lack the necessary policy tools and lobby for change

Cities are likely to find that there are policy areas which they need greater control over in order to tailor and deliver their industrial strategy. Where this is the case, local politicians should make the case to central government to either create or extend a devolution deal and once again clearly demonstrate how these powers will help deliver their priorities and meet national policy objectives.

Skills is one policy area where many cities feel they have limited power to influence provision to meet local employer demand.9 The Skills Advisory Panels aim to build a better understanding of skills needs across the country but it not clear what influence they are going to have. The Adult Education Budget is relatively marginal compared to other funding streams where it has been devolved and conversations about wider devolution seem to have stalled. Skills policy will play a fundamental role in raising the UK’s productivity, as will cities.10 To have real impact, it’s vital that Government gives places the necessary powers and resources to affect change.

The Shared Prosperity Fund, which will replace European Structural Investment Funds (ESIF) after Brexit, is likely to be integral to delivery of LISs, particularly employment and skills interventions. As Ministers and officials debate the detail of the fund, CAs and LEPs should develop clear plans for how the Fund can be used to boost productivity and earnings. For government, the focus for the replacement funds should be on achieving better outcomes rather than sustaining existing provision, and local partners should be given flexibility to spend the Fund according to the challenges and opportunities identified locally.