00Reducing the costs of success

There are costs to growth such as high property prices, congestion and air pollution. Policy needs to manage these costs if it is to help sustain success in our most buoyant city economies.

A number of UK cities, most of which are in the Greater South East, are already strong economic performers and make an important contribution to the performance of the national economy. But their success comes with costs too, for example pushing up the price of commercial and residential property and increasing congestion and pollution.1 While these costs play out across all cities, managing their impacts in successful cities in particular is necessary if these cities are to continue to make their important contribution to the national economy. Failing to do so may mean that these costs start to drag on future economic growth at the local and national level.

The implications for residential and commercial property costs is particularly clear. Figure 1 shows the correlation between house prices and rateable values of commercial property (used as a proxy for rent), with the size of the bubble representing productivity. As can be seen those places that are more productive tend to have more expensive housing and commercial space, as strong demand to locate in these cities as a result of their economic performance has pushed up the price of property.

Figure 1: The relationship between house prices, cost of commercial space and productivity 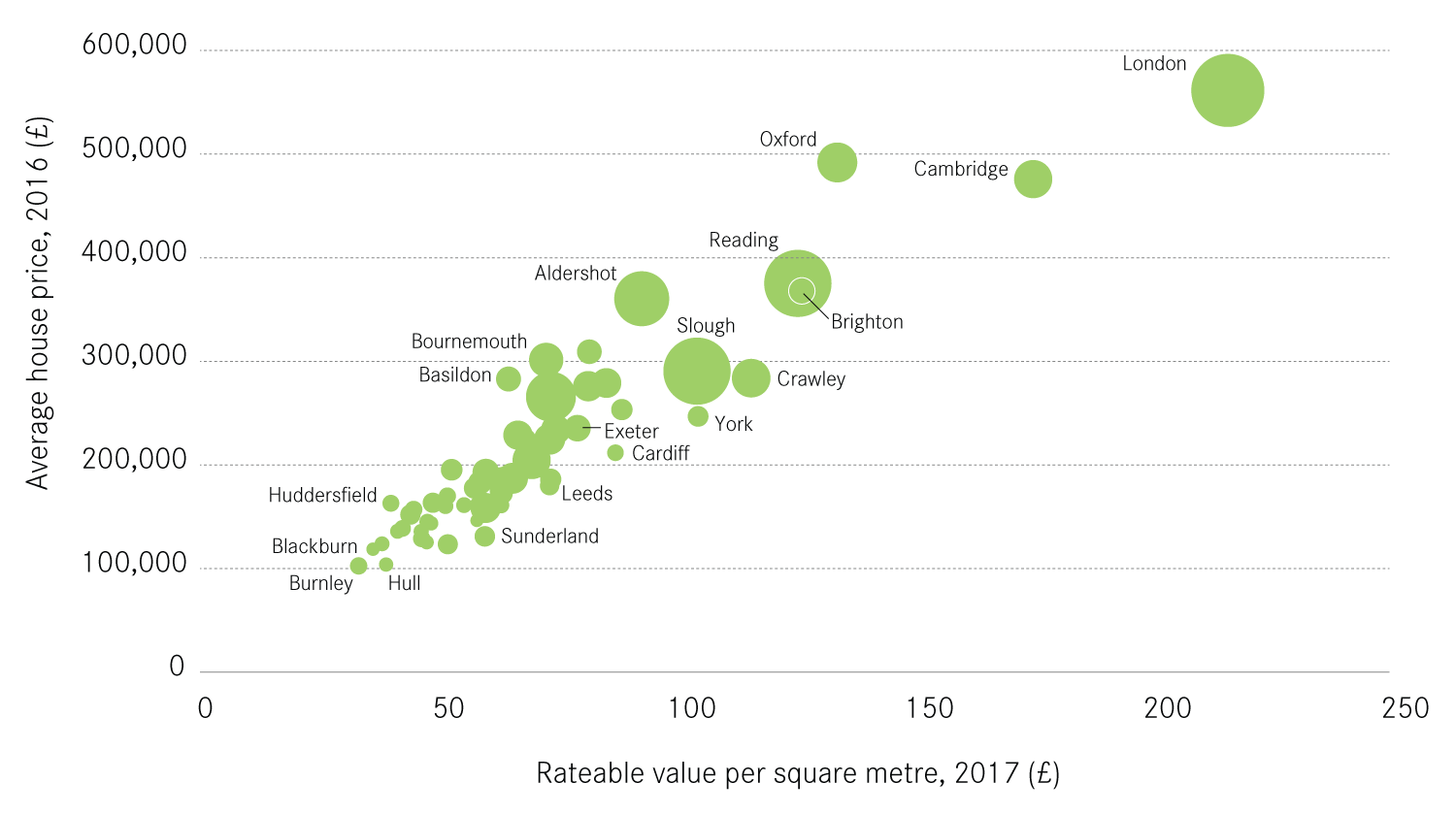 While the current geography of jobs and businesses across the UK (as set out in the first briefing in this series) suggests that high-skilled businesses are prepared to shoulder some of these costs to access the benefits of locating in our most successful cities, it is fair to assume that this will not last indefinitely. Indeed a number of business surveys suggest that housing costs in London are making it more difficult for businesses to recruit.2 This in turn reduces the benefits to a business of locating in the capital.

Increasingly unaffordable housing also has implications for inequality. High house prices hurt the poor in society the most, and price them out of the job opportunities available in successful cities. For these reasons increasing the supply of housing (and necessary related infrastructure) will be important in any strategy aiming to both increase the productivity and job opportunities in a city.

Two other problems resulting from density are congestion and poor air quality. The measurement of each is patchy, but there is some data that gives some insights.

Looking first at congestion shows that it is a particular problem for London. According to TomTom data, it ranks 25th out of the 390 world cities in their dataset for high levels of congestion, and according to Inrix it has the highest number of hours lost per driver at peak times – at 73, this is almost double second-place Manchester’s figure of 39.34

Average vehicle speeds suggest unsurprisingly that these congestion problems are particularly a problem in the centre of large cities. In 2013/14, the average speed in England was 24.3 miles per hour. In Greater London, it was 15.5. And in Camden and City of London, it was 9.2. Similar patterns are seen in Greater Manchester and the West Midlands.

Data on air quality shows that poor air quality is very much an urban issue.5 When looking at the 50 most polluted local authorities in the UK, just five are outside of urban areas. Again this is dominated by London boroughs, with Westminster and Kensington and Chelsea having the highest air pollution of any authority in the country. Meanwhile those least polluted tend to be rural authorities.

Poor air quality is responsible for many thousands of deaths and has recently been linked to poor sleep.6 Improving air quality – and the measurement of it – will be important if a city is to continue to be attractive to workers.