03The performance of the AMP in Sheffield City Region and beyond

Addressing Sheffield City Region’s productivity problems, therefore, means not just improving the productivity of existing activity in Sheffield, but also ensuring that new and higher-skilled exporting work is created in and attracted to the city-region.

The University of Sheffield’s AMRC and the AMP are distinct. The AMRC is a University-owned industrial research institution that links together advanced manufacturing research expertise in the University of Sheffield with multinational supply-chain manufacturing companies both in Sheffield and outside it.
The AMRC is a Catapult facility with projects across a range of areas including aerospace, automotive, civil nuclear energy, and health and is primarily located on the AMP. The AMP is located in Rotherham, close to the boundary with Sheffield.

The AMRC provides small amounts of commercial space for companies and manufacturing and access to industry-leading research equipment for experimental production runs. Companies that decide they want a more involved relationship to the AMRC’s benefits can locate on the AMP in facilities of their own, or they can remain elsewhere and tap into the wider network when they wish.

The AMRC includes specialist spaces such as the Nuclear AMRC, the Medical AMRC, and Factory 2050, with industry collaboration based in Sheffield. The AMRC is part of a network with activities elsewhere in the country, including at the Airbus wing-manufacturing facility in Wales. 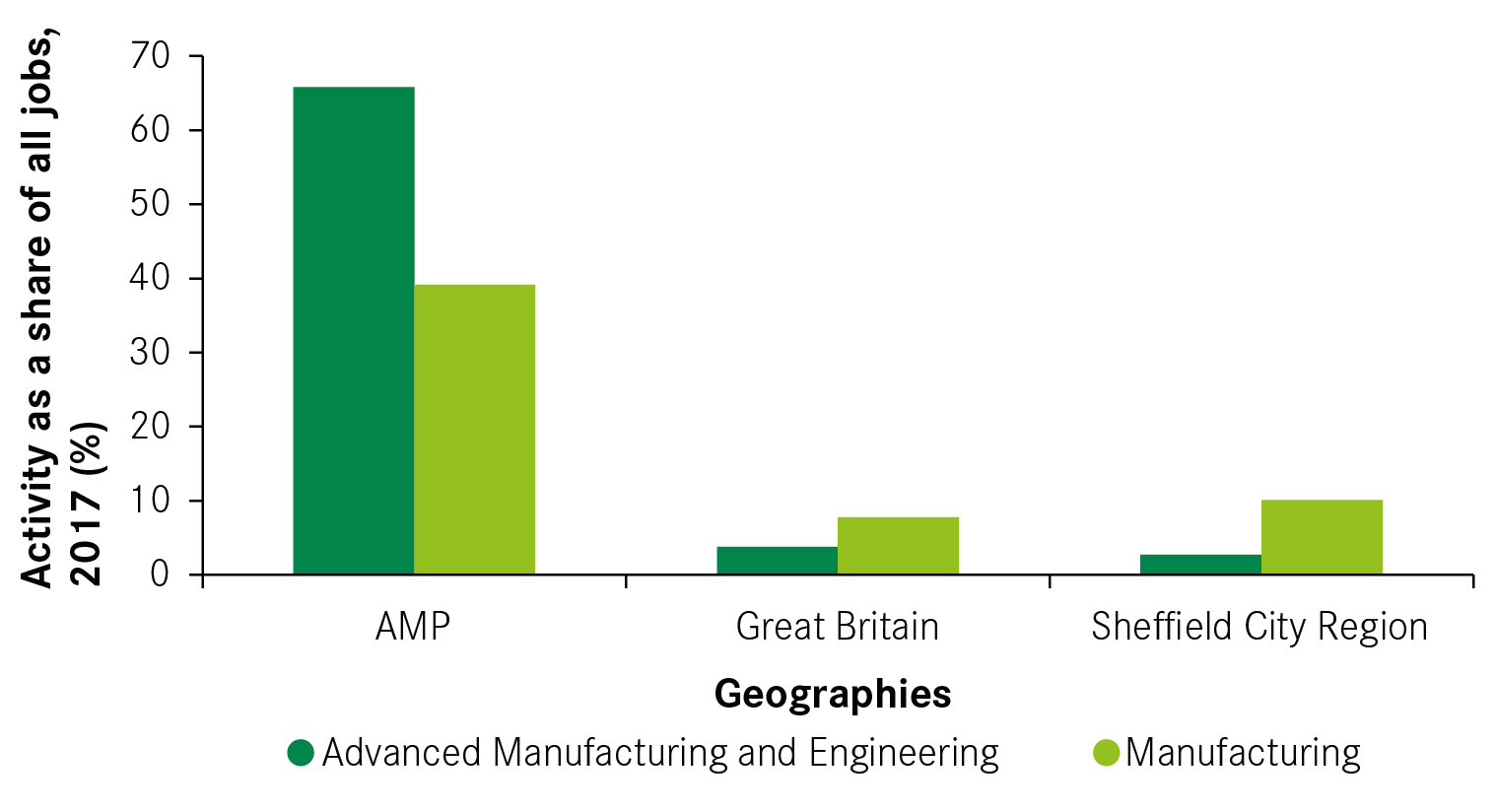 As Figure 2 shows, this advanced manufacturing is especially productive work compared to the rest of Sheffield City Region’s economy.

Box 3: Comparing the AMP to other parks

To compare the performance of the AMP to other places, a number of employment sites similar to the AMP were identified that were small enough to be distinct areas of advanced economic activity but large enough not to be dominated by one single manufacturing employer.

These include i54 in Wolverhampton/South Staffordshire, Cody Technology Park in Aldershot, Milton Park in Oxfordshire, Holford in Birmingham, Hillhouse near Blackpool, which is part of Lancashire Energy Enterprise Zone, Heathfield Industrial Estate in Exeter, and Warwick Technology Park.

This is not unusual – many of the comparator parks also play small roles in their local economies. Cody for example only contains 3 per cent of Hampshire and the Isle of Wight’s advanced manufacturing and engineering jobs.

Figure 7: Advanced Manufacturing and Other Jobs 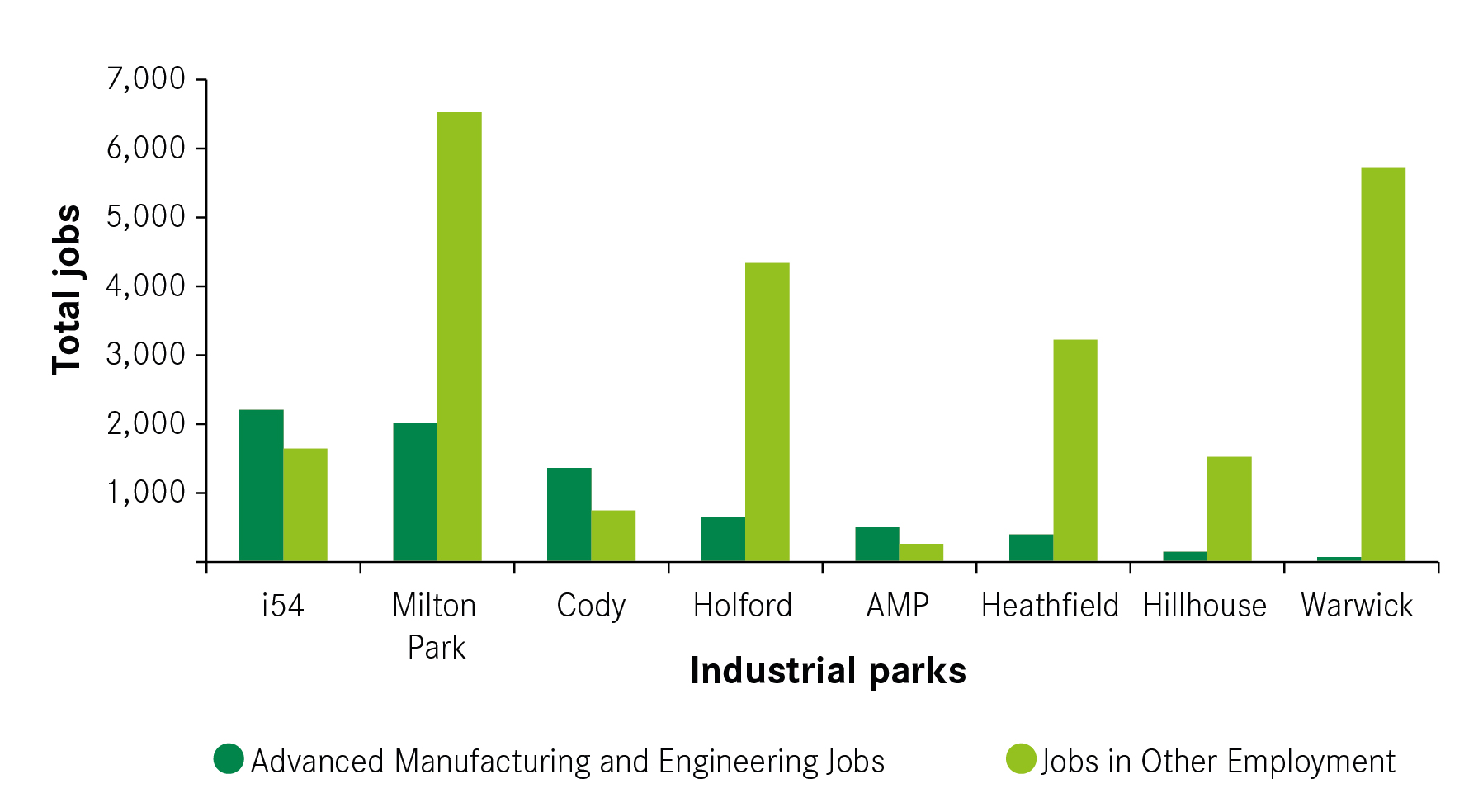 The AMP is an attractive location within Sheffield City Region’s economy
There is high demand from firms to locate on the AMP and this can be seen in the evidence on jobs and land values.

Most of the jobs on the AMP are new. Figure 8 indicates that over half of the jobs currently on the site have been created since 2012, rather than being already present or simply displaced from a different prior location. This is much higher than for any of the other comparator parks. 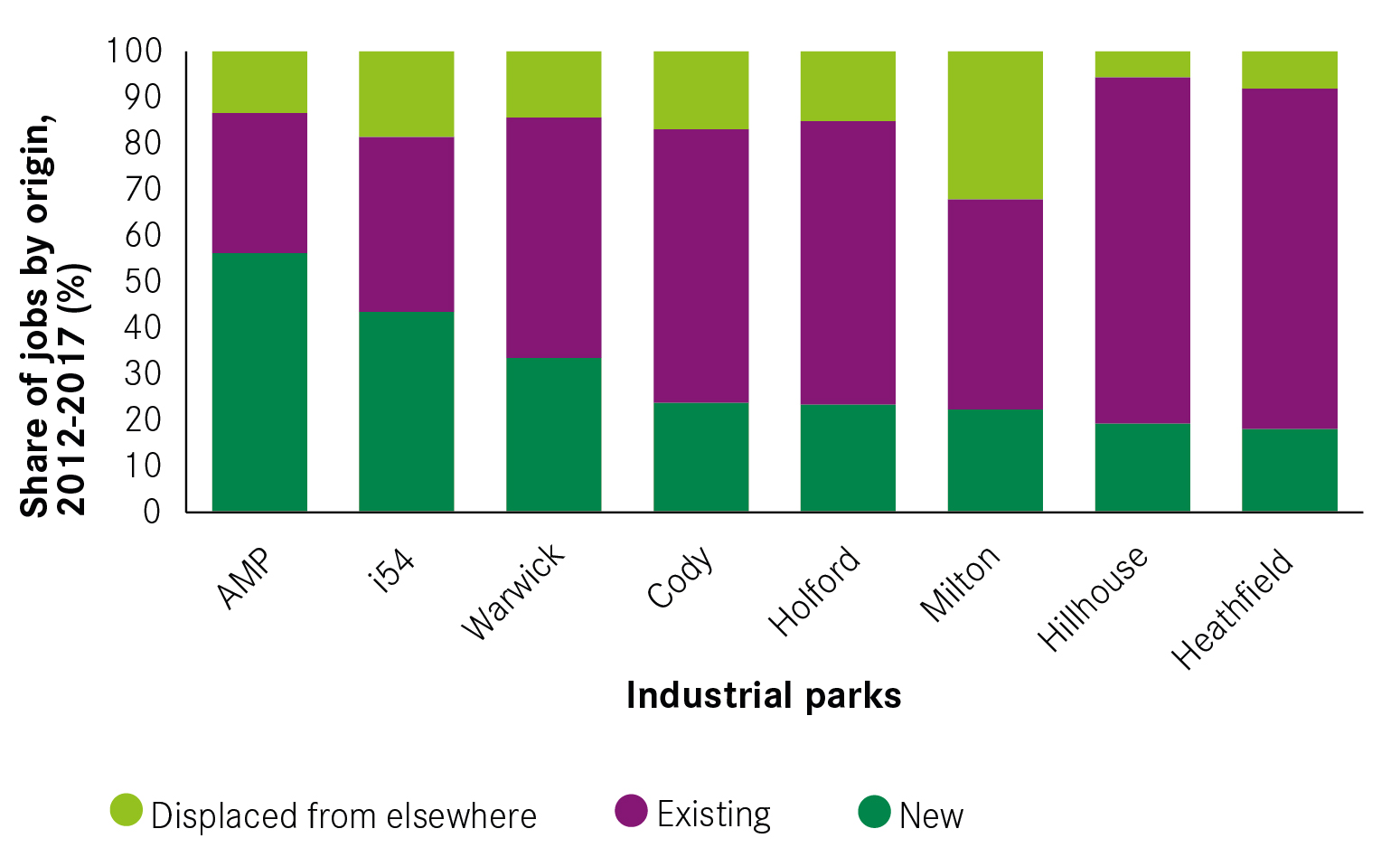 And these jobs have been created by firms which locate on the AMP even though it is expensive to do so. Figure 9 shows that the price of land on the AMP is high compared to Sheffield City Region as a whole. 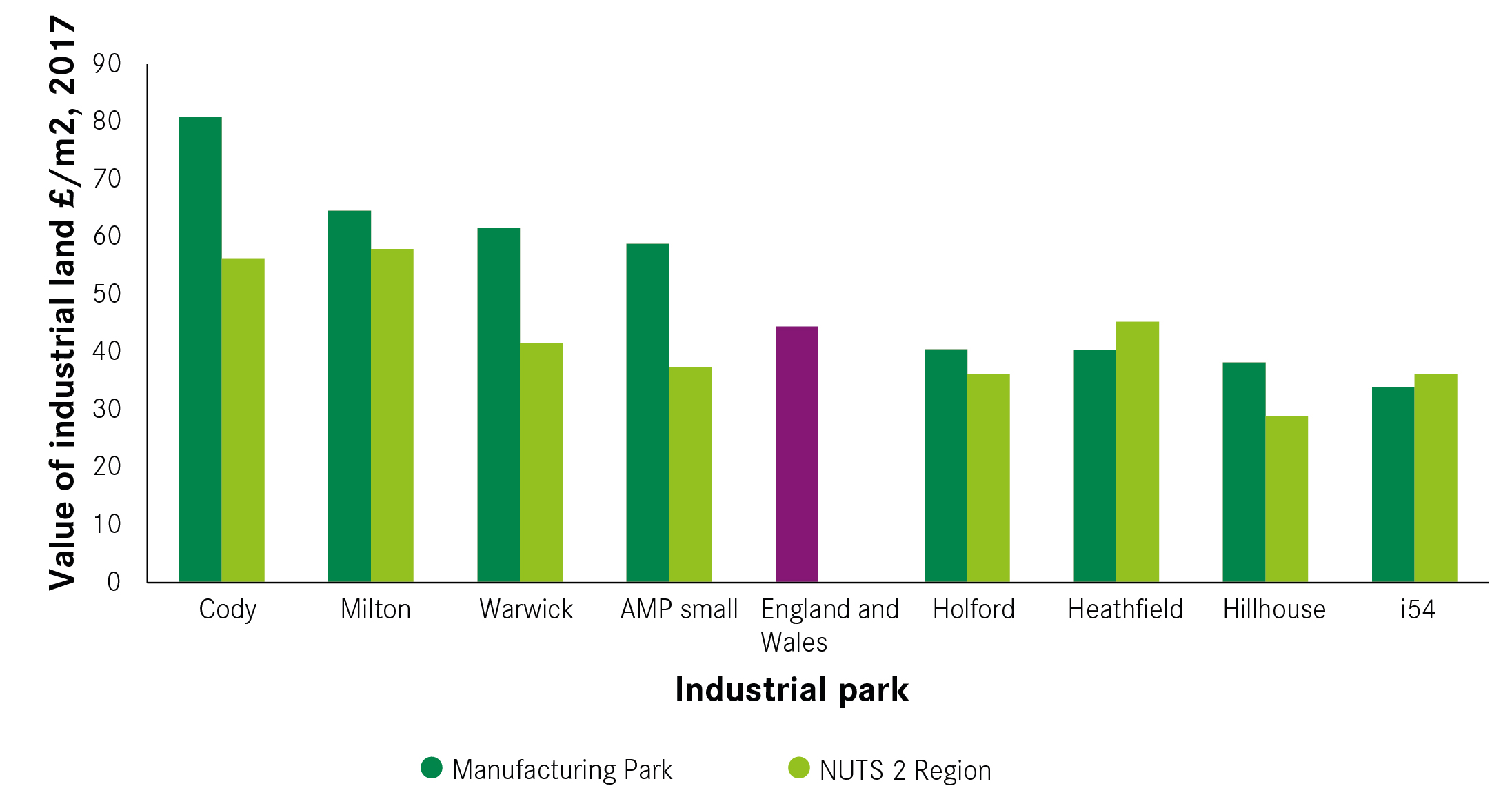 This suggests the AMP is a high demand area compared to other advanced manufacturing parks. The AMP’s land is as, or more, valuable than these other parks, despite being in a city-region with a much weaker skills base. Figure 10 shows that Sheffield City Region has fewer workers occupying a high-level position (such as managers, engineers, data scientists or lawyers) than any of the regions in which the comparator business parks are located. 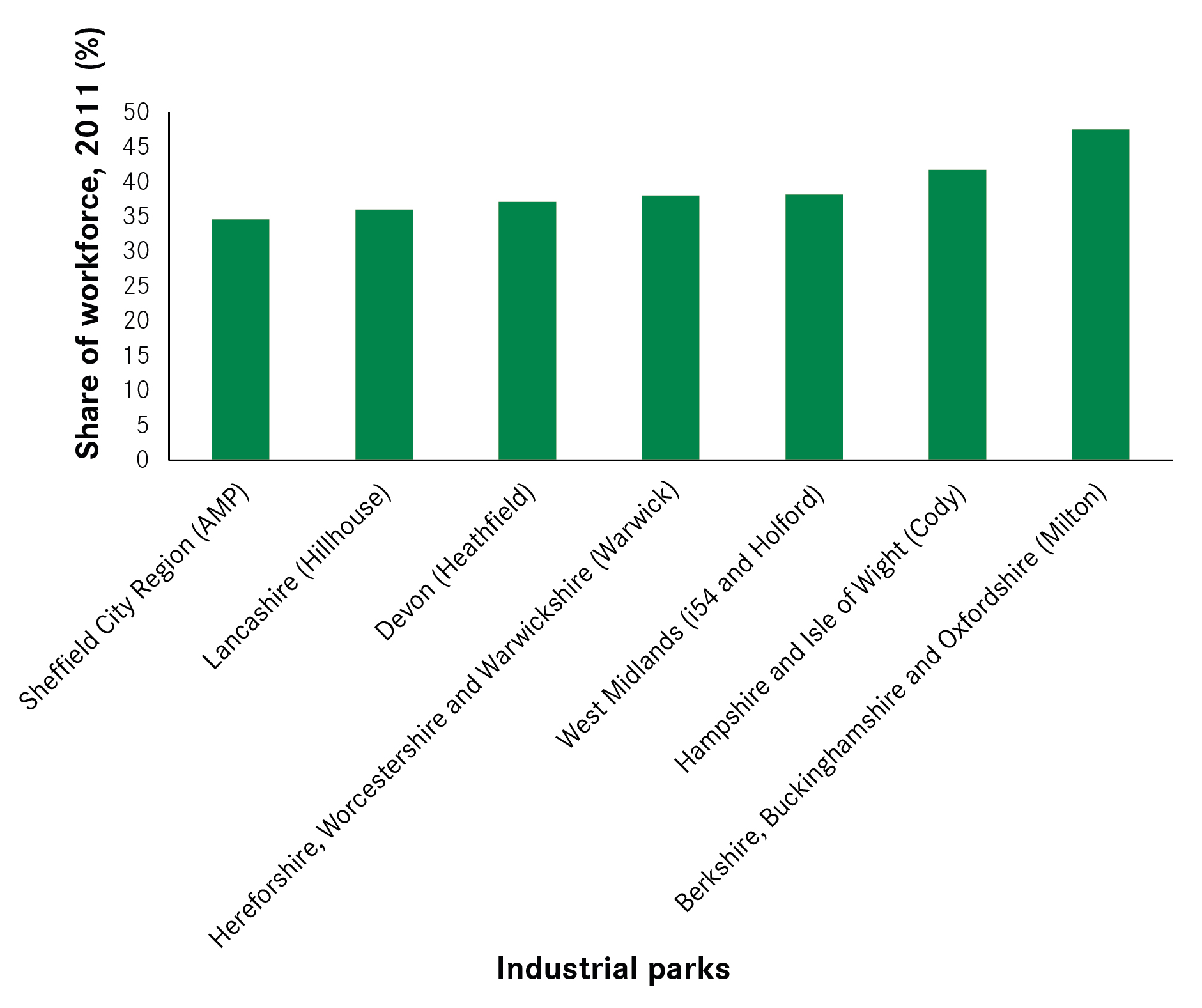 There is a large gap between Sheffield City Region and the regions of Cody and Milton parks (Hampshire and Berkshire, Buckinghamshire and Oxfordshire) with the most expensive land. Here, high-level occupations account for 42 and 48 per cent of all jobs, compared to 35 per cent in Sheffield City Region. Advanced manufacturing locates in these other parks in part due to the skills their local economies can offer. This drives up local wages and the price of land.

The AMP is a cluster of high-skilled and productive activity. Even though the AMP is expensive to locate on, there are now almost 500 advanced manufacturing jobs on the site, with half of all jobs having been created since 2012.

Understanding what these results mean for national and local industrial strategy requires an understanding of the origins of the AMP, its appeal to firms, and whether the model is replicable in other places.