04What can cities do to improve the economic outcomes of their low-skilled populations?

Different cities face different challenges when it comes to offering economic outcomes to low-skilled people. The policy solutions should, therefore, reflect these differences.

Not only this, short-term pressures and long-term policy goals rarely go hand in hand, which makes it more difficult for policymakers to design policies that are inclusive in the longer-term.

In the short-term, cities should consider the following three policy solutions to improve the economic outcomes of low-skilled people

To attract low-skilled exporting businesses, cities need to offer access to a large pool of workers and relatively cheap land.

Cities with stronger economies may not be in a position to attract these types of jobs, as the price of land is too high to be attractive to low-skilled exporting businesses.

On the other hand, cities with weaker economies are already in a better position to attract lower-skilled exporting businesses because they already offer the benefits these firms seek. Thanks to the high number of low-skilled jobs these cities are able to attract, continuing to pursue this policy could, at least in the short-term, reduce the unemployment rates of low-skilled people in these cities.

However, while attracting these jobs is – in the short term – better than attracting no jobs at all, these cities have been using this mechanism for decades and have struggled to see the levels of economic growth they need to successfully support low-skilled people in the longer term. At the same time, these policies do not help to deliver a diverse businesses environment, and limits the choices of low-skilled people to low-skilled jobs only.

Furthermore, with increased automation and globalisation, many of the low-skilled exporting jobs we have today, are at risk of disappearing by 2030.12 Hence, the cities seeking out these types of businesses to alleviate pressures at the bottom end of the labour market may be facing bigger challenges 10 years down the line.

In cities with strong economies, addressing challenges around job accessibility is what it takes to improve the economic outcomes of those at the bottom end of the labour market. In practice, this means interventions on transport and housing.

In contrast, in weaker economies, low-skilled jobs are less likely to locate centrally and are more likely to be dispersed around the city.

These differences do not come as a surprise, as the low-skilled local services jobs strong economies generate tend to cluster close to where demand for them is greater, which is often in city centres.

The implication from this is that for cities with strong economies, improving the links between suburbs and the city centre will allow more people to access the many opportunities available.

While improving transport is a first step to ensure more low-skilled people can access the labour markets of strong economies, cities with stronger economies ultimately need to build more homes.

In these places, measures aimed at improving housing affordability, such as providing more social housing or increasing overall housing supply, can make a positive difference when it comes to creating economic opportunities for those at the bottom end of the labour market. Increasing housing affordability would bring the direct benefit of making those job opportunities that are already available more accessible for low-skilled people, and would also have the indirect benefit of creating further jobs in local services as the result of an increase in population in the area.

However, not all cities will benefit from this. In cities with weaker economies, housing is already affordable and as such, building more homes will not bring the same positive benefits to the economy.

In the longer term, if cities are serious about inclusive growth, they need to encourage a shift towards high-skilled economies

While the measures presented above can help relieve low-skilled people from short-term pressures that prevent them from accessing better economic outcomes, in the longer-term, a more radical shift is required: there cannot be inclusive growth without overall economic growth.

This means creating enough economic growth for everyone to benefit from, up and down the country. This would not only reduce inequalities within places but between places too.

To do so, cities need to address this issue both from a supply and a demand side.

2. Making sure people of all ages can access the education they need to succeed in the labour market

Ultimately, the best way to improve the economic outcomes for low-skilled people is to ensure they can access opportunities to train and upskill. This applies everywhere across the country and requires interventions both to prepare younger generations to enter the labour market and, even more importantly, to support those who have already left compulsory education with few or no qualifications.

Much has been done in recent years to improve education, but there is still large variation across places. Historically, cities with weaker economies have been less successful at providing people with the skills they need to succeed in the labour market (see Figure 10). Twenty years ago, only 28 per cent of pupils in cities with weaker economies achieved five or more A*-C GCSEs including Maths and English, compared to 32 per cent in stronger economies. And looking at individual cities, these differences are even wider. Just 21 per cent of pupils achieved strong GCSEs in cities such as Barnsley and Bradford, compared to more than 40 per cent of pupils in cities such as Aldershot and Bournemouth. 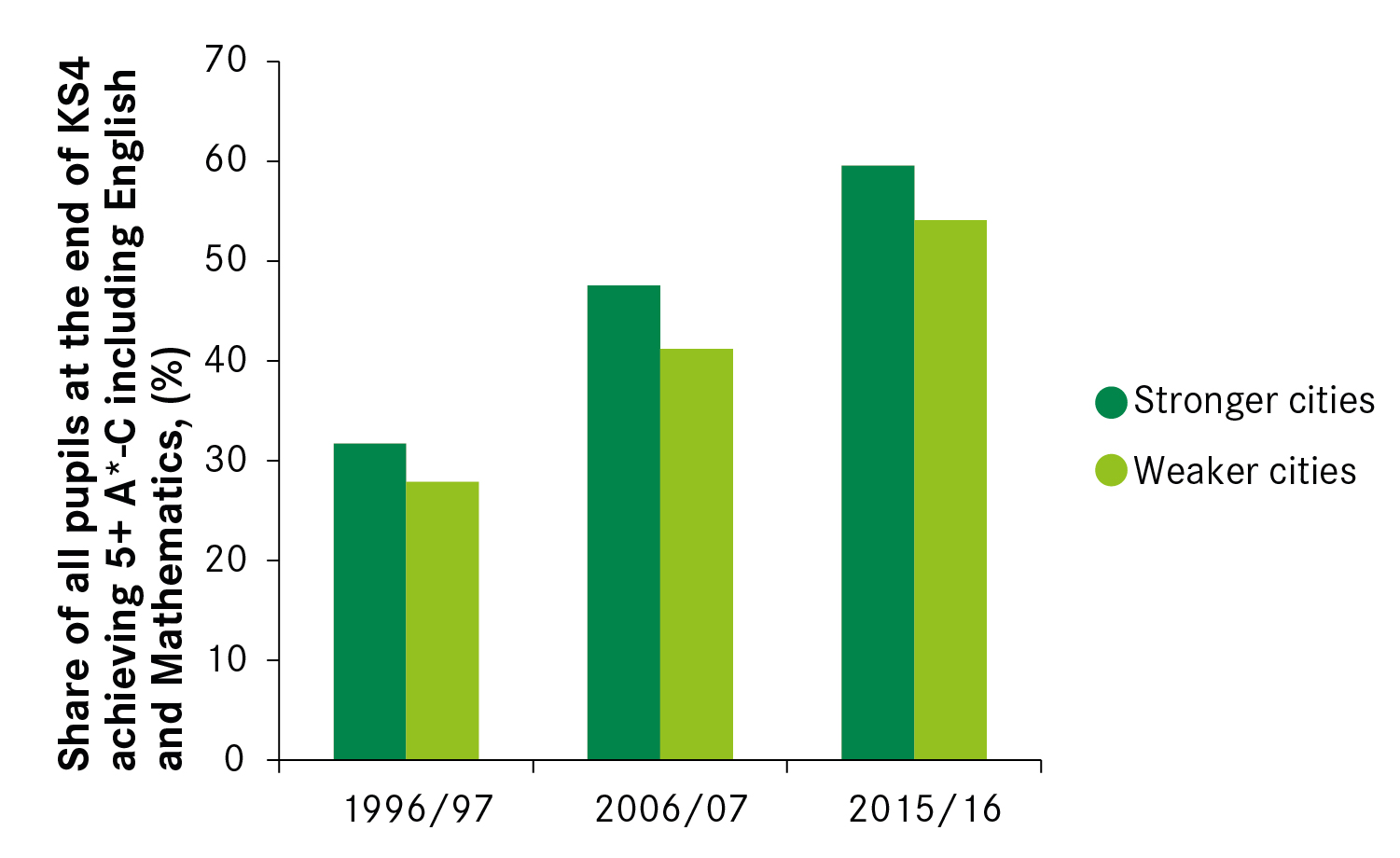 These differences – which remain today despite improvements to overall grades – matter because of the central role education plays in shaping individual futures and offering a chance for social mobility. Indeed, employment rates are much higher among individuals with at least some qualifications, and skilled people tend to be more mobile.13 This means the chances of finding and accessing jobs are greater.

For these reasons, measures around improving access to and take-up of education, from early years through to school-age and higher education are of crucial importance to delivering a more inclusive society.

However, national and local policymakers must not forget about those who have already left compulsory education. The low-skilled workforce cities have today is a legacy of an education system that failed to prepare everyone for the labour market. 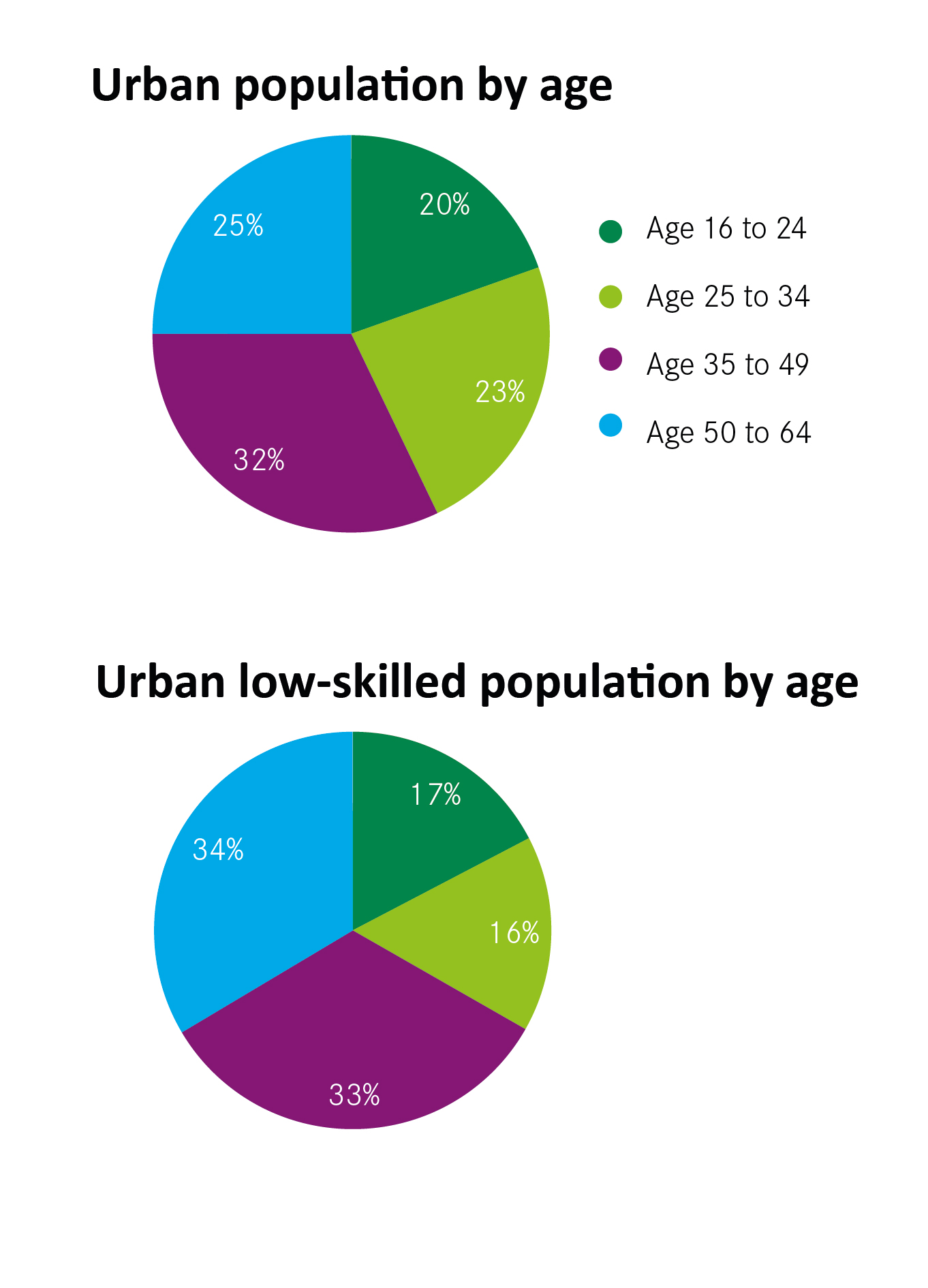 While much has been done already and should continue to be done to improve compulsory education, any successful strategy to reduce the number of people with few or no qualifications must involve opportunities to upskill and train those already in the labour market.