02The economic outcomes of low-skilled people in urban Britain

Figure 1: Distribution of low-skilled jobs and people in Great Britain, 2017 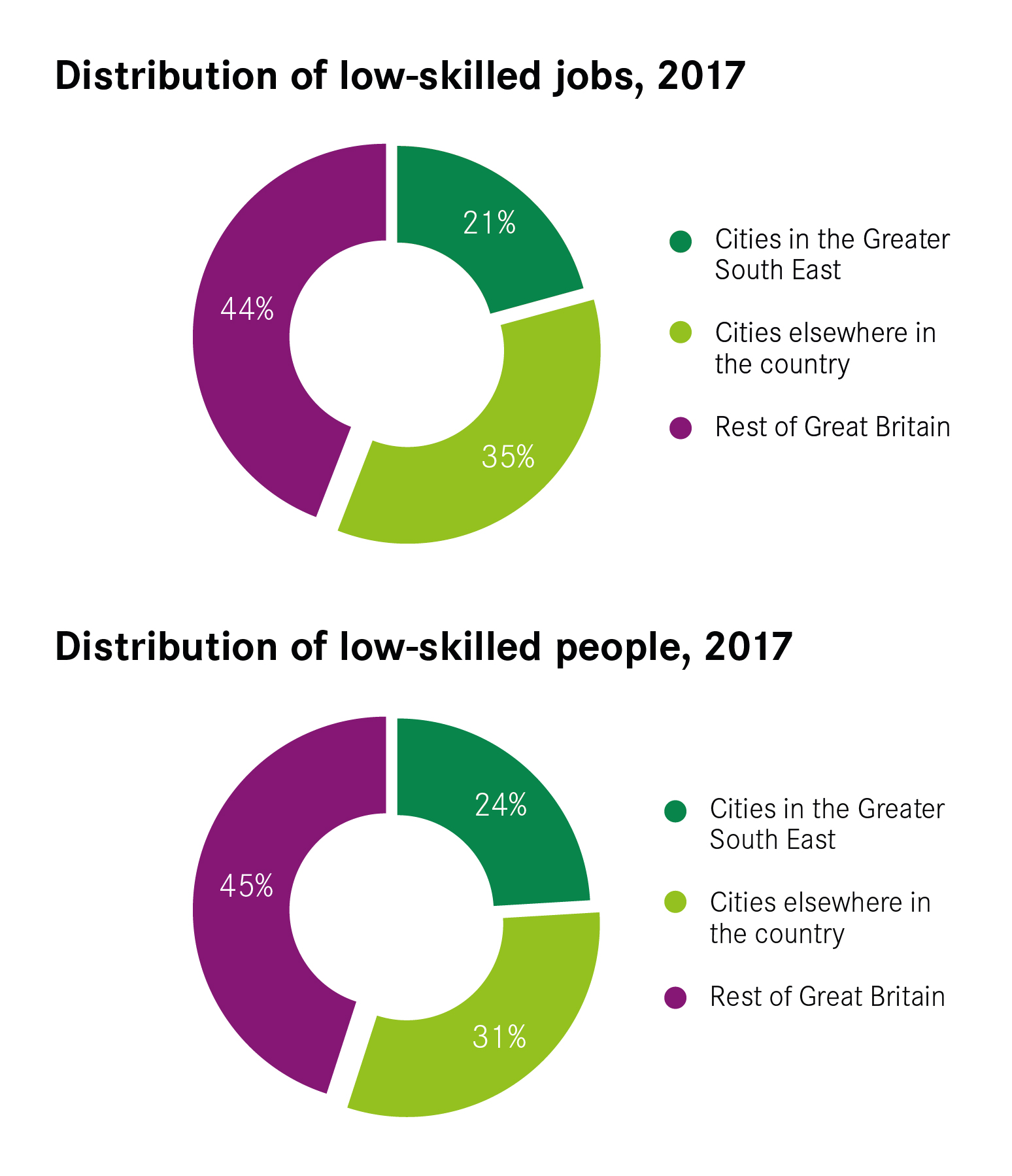 In these cities, low-skilled jobs and people play a much bigger role too. In many cities outside the Greater South East, such as Mansfield, Sunderland and Hull, a third or more of all jobs available are in low-skilled occupations, such as process and plant operatives, customer services and elementary occupations (see Figure 2). This is higher than the national average of 24 per cent and is in sharp contrast to cities like Brighton, Reading and London where low-skilled jobs account for less than 20 per cent of all jobs, a much smaller portion of the labour market. 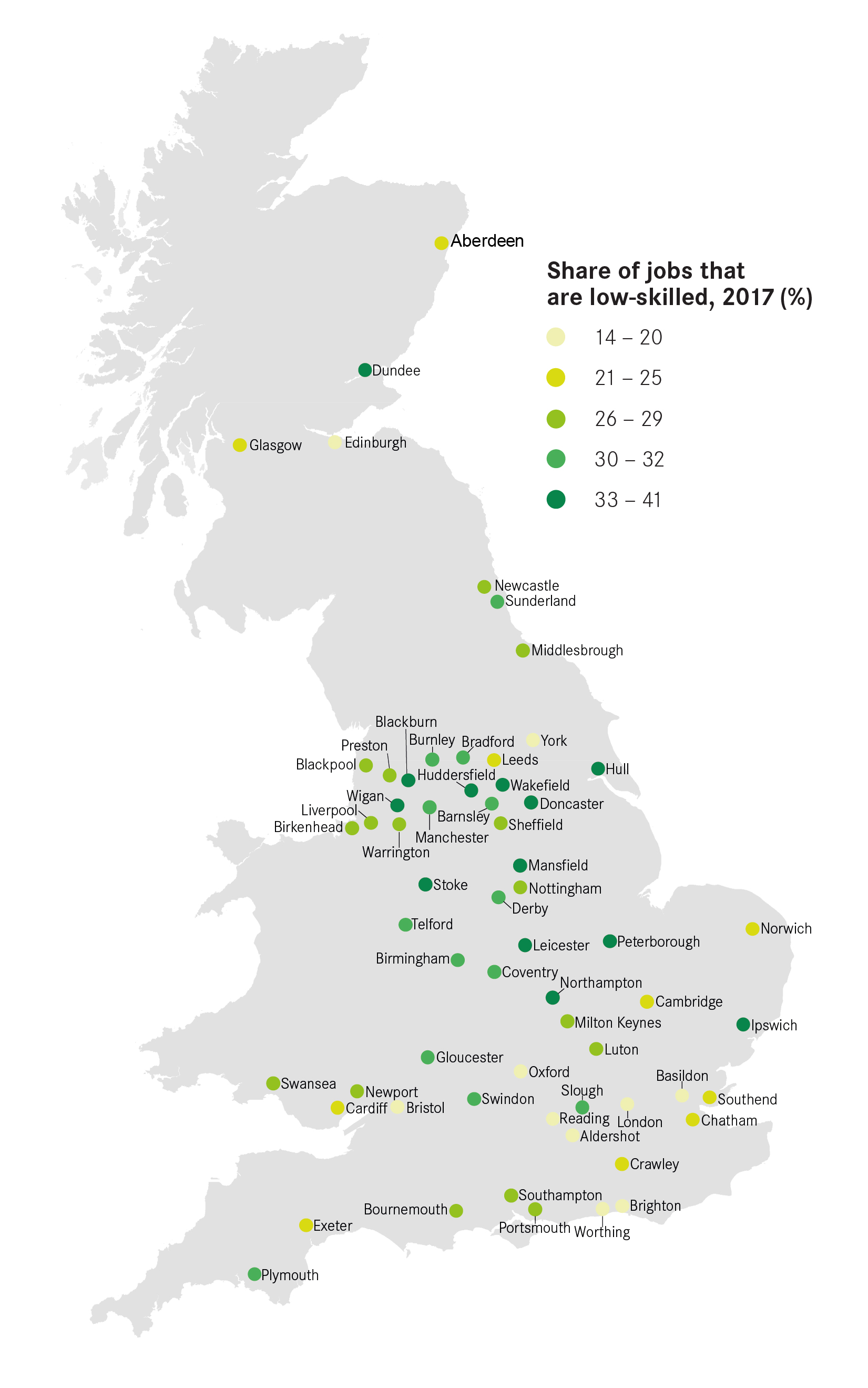 This pattern is also visible when looking at people’s skills (see Figure 3). On average, 18 per cent of the working age population in Great Britain is low-skilled, but in many cities in the North and Midlands – such as Mansfield, Bradford and Birmingham – almost one in three people are low-skilled. This is almost three times the share of low-skilled individuals in some city economies in the Greater South East such as Oxford, Cambridge and Reading where there is only one low-skilled person for every 10.

Figure 3: Share of working age population with few or no qualifications, 2017 (%) 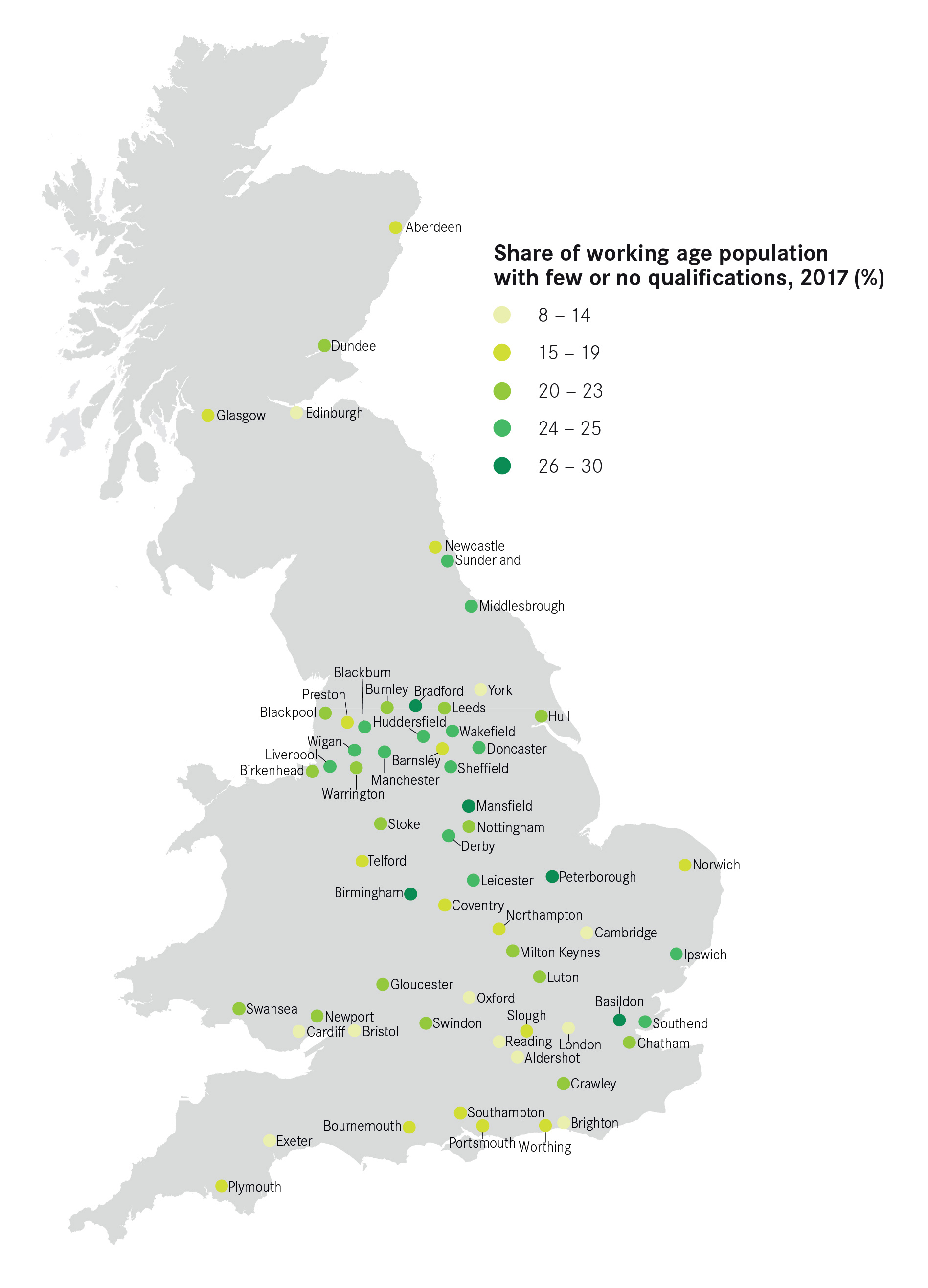 It is in cities in the Greater South East, where the economy is stronger, that low-skilled people have better economic outcomes

Cities in the Greater South East have a higher share of high-skilled jobs. In recent years, these cities have grown their stock of high-skilled exporting businesses making their economies stronger (see Box 2).

Box 2: How does a city create a strong economy?

The economic success of a city is determined by its ability to attract exporting businesses.
These businesses sell to many markets – regional, national and international – meaning that places that are able to attract them can benefit from the money these businesses inject into the local economy.

Among the exporting businesses, it is high-skilled exporters, such as engineers and financial services businesses which bring the most wealth to a local economy.
Given their ability to sell to many markets, these businesses are in theory able to locate anywhere. As such, this means that their location decisions are based on the advantages that different places offer to them.

In particular, in deciding where to invest, high-skilled exporters tend to look for two main things: access to knowledge and high-skilled workers. In recent years, cities in the Greater South East have tended to be better at offering businesses these benefits, and this is reflected in the strong economic performance of these places.

By using Census data it emerges that in these cities low-skilled people have better economic outcomes than those living in cities in the North and Midlands.

1. Low-skilled people are less likely to be unemployed in
stronger economies

Unemployment rates among low-skilled people are higher in cities in the North and Midlands than in the Greater South East. In Hull and Liverpool for example, around one in five individuals with few or no qualifications is unemployed, compared to less than one in 10 in Aldershot and Bournemouth.

The economic performance of places – rather than the presence of low-skilled jobs – appears to be a key determinant of unemployment rates (see Figure 4). And where high-skilled exporters play a much bigger role in the economy, unemployment rates tend to be lower.

Figure 4: The relationship between the strength of an economy, unemployment, rate and low-skilled unemployment rate, 2011 (%) 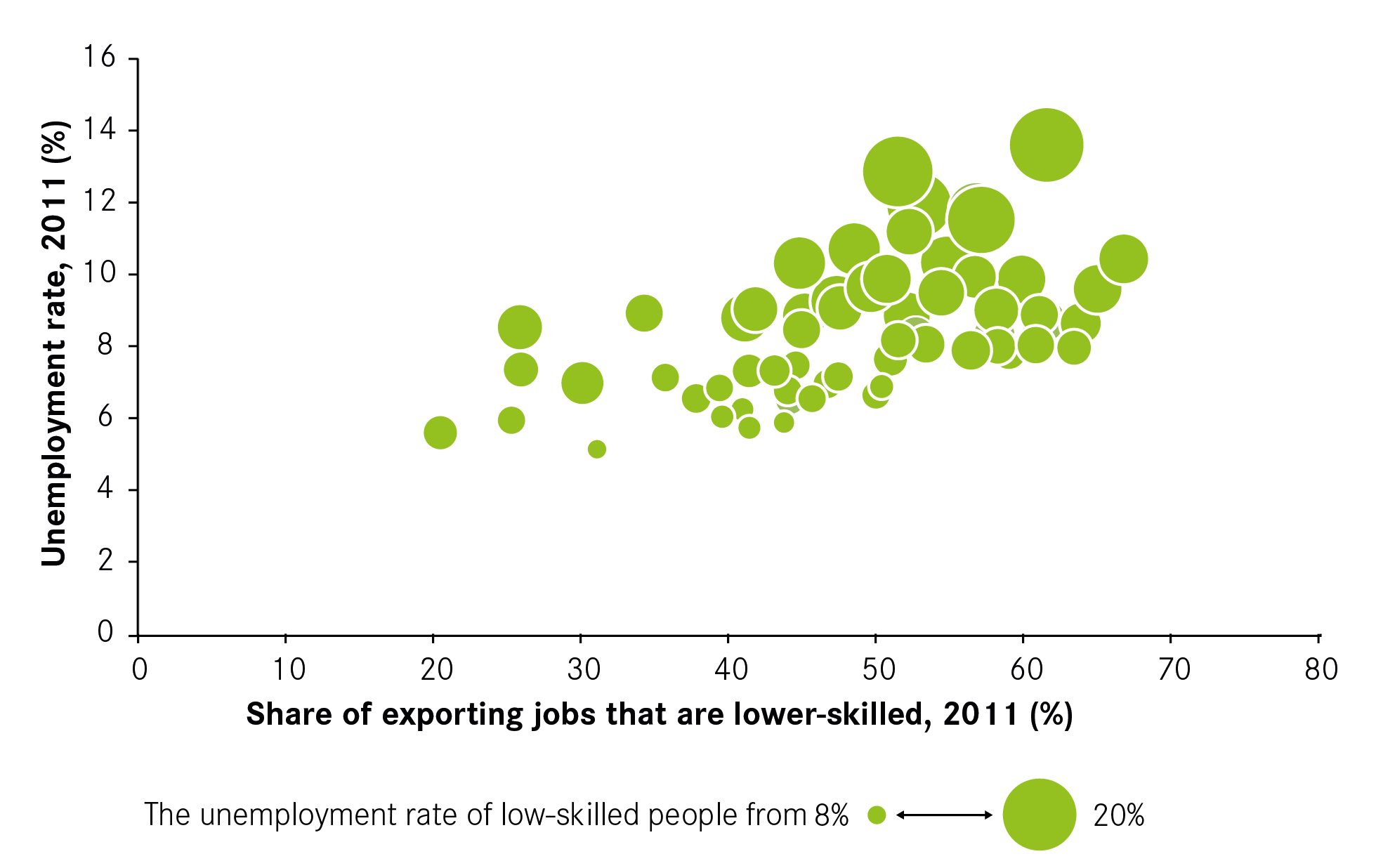 2. In stronger economies, there is a more equal balance between low-skilled people and jobs

Indeed, for every low-skilled job in weaker economies,5 there are on average 1.66 working-age people with few or no qualifications. The ratio is even higher for places such as Southend, Barnsley and Birkenhead where there are two or more low-skilled people for each low-skilled job.

This means that there is greater competition for low-skilled jobs among low-skilled people in weaker economies than there is in stronger ones.

In Aldershot, London and Reading, approximately 60 per cent of workers with few or no qualifications work in medium-or-high-skilled occupations (see Figure 6). This is higher than in weaker economies, such as those of Wakefield, Sunderland and Doncaster, where the share of low-skilled workers in higher-skilled occupations is around 40 per cent.

As a result, these indicators suggest that the job outcomes for low-skilled people are better in stronger economies than in weaker ones.

However, pressures on housing make the many opportunities strong economies offer less accessible

While it is true strong economies create more job opportunities for the low-skilled, these might not always be accessible.
One of the challenges associated with strong city economies is that success comes with increased pressures on the housing market. Looking at how many low-skilled people moved house, and where to, can give an indication of the effects of high house prices on low-skilled people.
As Figure 7 shows, cities with stronger economies tend to be less affordable. As a result, these cities see a much bigger share of low-skilled individuals who move house choosing to leave the city.
In 2011, on average, the annual house prices in Britain were nine times the annual salary of residents but among the most successful cities, the ratio was much higher. Oxford and Cambridge were the least affordable cities, with house prices at 14 and 11 times higher than annual earnings. These cities also saw the biggest share of low-skilled people moving house and leaving the city. Of all the low-skilled people who lived in Cambridge in 2010 and moved house, 47 per cent left the city. In Oxford, the share was 36 per cent.

Figure 7: The relationship between the strength of an economy, housing affordability and share of low-skilled people moving out of the city 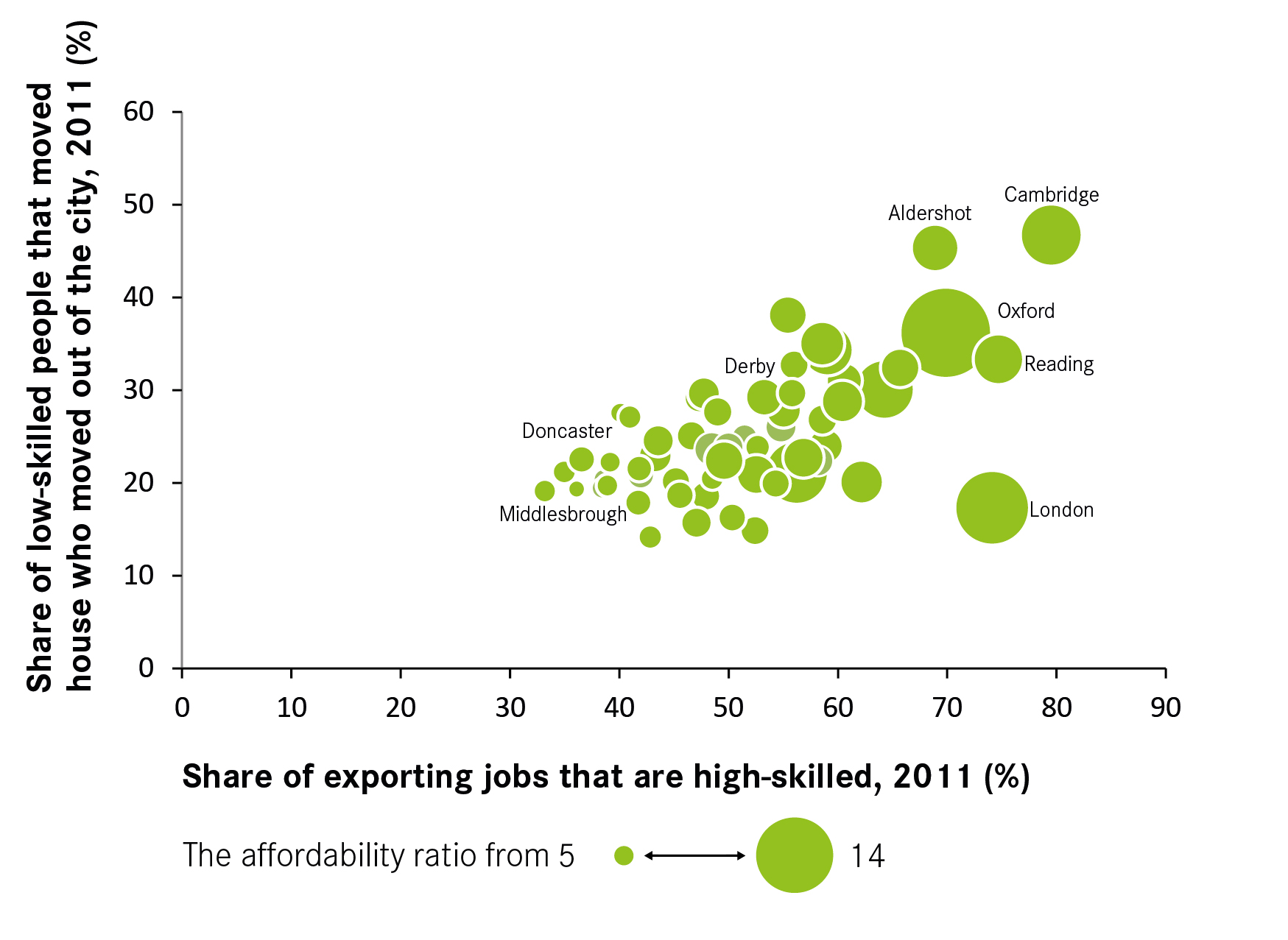 In contrast to other highly successful and unaffordable cities, London does not seem to push low-skilled people out as much.

The large majority (83 per cent) of all low-skilled people who lived in the capital and moved house in 2011 remained in London, while only 17 per cent left the city altogether.

While the data does not allow the tracking of people’s movements within the city, it is plausible to believe low-skilled people who moved house in London have moved further away from the city centre, reflecting the high house price growth inner London has experienced in recent years.

As with all the cities in this report, London here refers to the London Primary Urban Area, which is larger than the Greater London Authority boundaries. See www.centreforcities.org/puas for more information.

Of those low-skilled people who moved, most did not move far. Some 37 per cent of those who moved house and left Cambridge, for example, moved to non-urban areas within the same region. In Oxford, the figure was 27 per cent. Other strong city economies experienced similar patterns, suggesting that the low-skilled people moving out of these cities still value the proximity to these places’ labour markets, but cannot afford to live in them.

Private renters in areas of limited housing supply particularly feel this increase in costs of living. Recent research from the USA suggests that the impact of growth in high-skilled businesses on individuals depends on whether they own their own home. Those that do, are able to capitalise on the increased productivity high-skilled exporters bring into a city through an increase in the value of their home. Those who do not, bear the costs of this increased productivity in the form of higher rents.7 Low-skilled people, who tend to be in low-paid jobs, are more likely to fall into the second category.