Various studies have reported a link between the provision and re-use of public sector information and economic growth.7 These studies have found that improving access has a positive impact on the number of users and is associated with greater innovation, improved and new services, and efficiency improvements from better resource allocation and informed policy.

As such, there are large benefits that could be achieved from opening up city-level datasets currently held by the Government.8 In 2012 the UK Government committed to releasing more of the data it already holds, recognising that this will improve transparency, provide citizens with the necessary data to innovate and generate savings as well as supporting social and economic growth. To date over 10,000 datasets are listed as available for download via data.gov.uk. However, despite BIS reporting that the most popular dataset category requested is location-specific data,9 the amount of data publicly available below a regional level remains limited.

London leads the way in utilising this local level data in the UK. Transport for London (TfL) is using Oyster card data to model the London transport network. This means TfL can predict the impact of delays and then prioritise investment in station upgrades, helping to ensure money is spent where it is most needed (case study 1).

TfL currently provides information on real-time service updates and arrival and departure times of buses, train and the underground via the TfL website and phone apps. These allow travellers to plan and adapt their journeys in response to real-time transport conditions throughout London, as well as improving public scrutiny of performance.

TfL has also collaborated with UCL to make use of the vast amount of data recorded through the Oyster card system. The data has been used to monitor journey times, numbers of passengers and the effects of various situations on congestion patterns, such as the impact of mechanical failures on a particular line. This has enabled predictions to be made of how delays will impact along the network and what measures could be put in place to best limit disruptions. The data has also been used to identify where to prioritise investment in station upgrades and the impact any upgrades are likely to have. For example, TfL has estimated that, when completed, the Northern line upgrade will increase capacity on the line by 20 per cent.10

Lambeth Council is making the data it holds publicly available through ‘Lambeth in Numbers’.11 This website provides local level data to improve understanding about how Lambeth’s services can improve the wellbeing of citizens (case study 2).

Lambeth Council has pledged to publish all the information it holds to enhance the understanding of the relationship between local assets and infrastructure and the activity and wellbeing of its population. It is developing an open data demonstrator project titled ‘Lambeth in Numbers’ that allows users to link up data sets about the local area. Currently, the site contains data relevant to Lambeth’s Food Strategy, including DCLG’s Indices of Multiple Deprivation, NHS data on child obesity, and data from Lambeth Council on food-related facilities and activity. Users are able to provide feedback on the site and can also upload their own data.12

Many other countries and cities also operate an open data policy

An Open Data Strategy for Europe was launched by the European Commission in 2011, and in June 201313 the G8 committed to moving towards open data by default.14 Reviewing the amount of government data publicly available in other countries, as well as how it is used, suggests ways in which the UK could further improve.

At the city level, New York’s Open Data Policy illustrates how the publication of government data allows organisations to link data sets together to identify previously unknown relationships. Through linking datasets from 19 different agencies on all 900,000 property lots in the city, a model was developed to predict which properties are most likely to have illegal conversions. This has allowed inspectors to target properties to visit, saving the city time and money. As illegal conversions are a high fire risk in the city, the detection of conversions has also improved housing standards and safety for residents (case study 3).

In 2012, New York City Council passed a law to make all City managed data available through a single web portal on or before December 31 2018 (unless that data is deemed confidential). The aim is to improve transparency and allow the public to develop innovative uses of the data. Currently data is available on a variety of themes, including public safety, education, buildings complaints, restaurant inspections and real-time traffic numbers.

The benefits seen from this include the development of a model to predict which properties are most likely to have illegal conversions, which are associated with overcrowding and fires. The Open Data policy of New York meant that data on all 900,000 property lots in the city collected from 19 different agencies could be linked together. The datasets used included information on properties where owners had unpaid/overdue property taxes, missed utilities payments and service cuts. A correlation was found between these variables and illegal conversions, allowing inspectors to target which properties to inspect. Major violations are now found at about 70 per cent of the buildings searched, rather than 13 per cent previously, saving the city time, money and improving housing standards and safety.15

In 2013 the Shakespeare Review noted that, to progress its open data agenda the Government should identify and release “core reference datasets”.16 In response the Government is now doing this, and is consulting via the www.data.gov.uk site as to which datasets to prioritise for release. Once identified, the aim is to release all core departmental data by 2015. As such, the Government is adopting a more demand-led release strategy to address the imbalance between supply of and demand for government-held data.

The Government holds a number of datasets that if made publicly available could have a significant impact on understanding and improving cities.

While there are potential costs associated with releasing any data (as outlined in section 3) the data sets described in table 1 would provide more timely and detailed information than is currently available which, in turn, would improve understanding of how cities function and what changes are needed to improve city life and performance. Table 1 sets out the Government department that currently collects and holds this data at a level appropriate for city analysis (Local Authority level or below) and the benefits that would be seen from prioritising its release.

The economic performance of UK cities could also be enhanced through increased collection, aggregation and publication of data

The Shakespeare Review noted that currently the United States invests a great deal more than the UK in its National Data Strategy and has seen large benefits from doing so in the form of world-leading business applications.9 Comparisons with US government metro data and the work done by the Brookings Metro Monitor, which provides on-line access to a variety of data on the 100 largest USA metropolitan areas, reveal a number of key areas in which the UK could improve its provision of city data and thereby its ability to support economic growth. These are outlined in table 2.

Greater provision of this type of data would remove some of the barriers of trying to understand and evaluate city performance and would allow for targeted policy development to improve the economic performance of cities and so the UK economy.

Figure 1: Data to prioritise for release 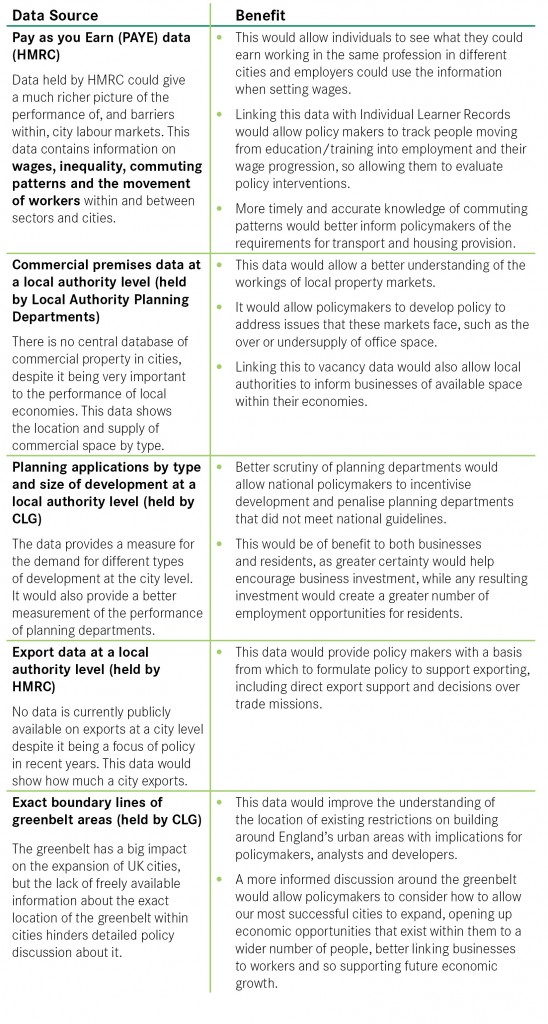 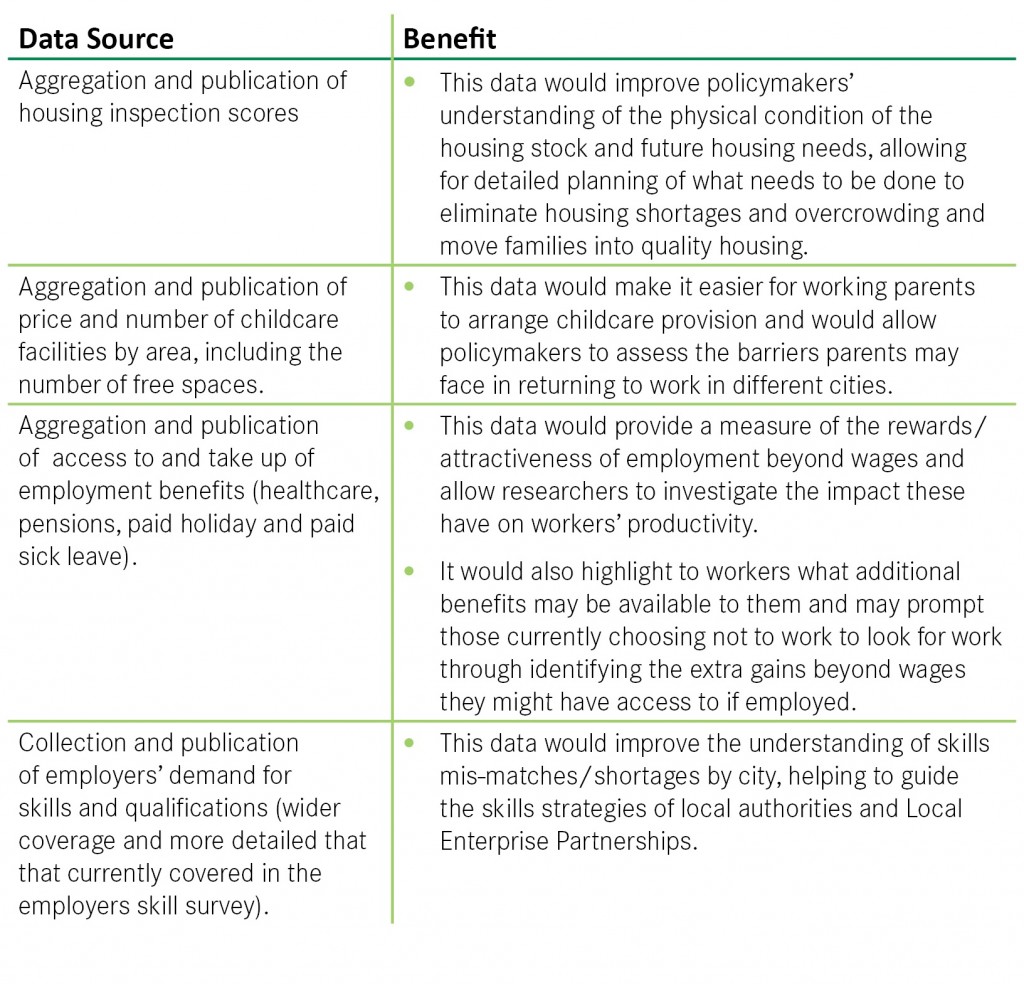 Supply is not enough – the Government also needs to boost demand

To improve this, the Government is consulting as to which datasets to prioritise for release. The downside to this approach is that the potential benefit of data is not always obvious until the full dataset can be examined. This approach also assumes a detailed knowledge of the data the Government holds which is not always true. A solution to this that has proved sucessful in the US is ‘Hack Days’, discussed in case study 4.

Several cities, such as Chicago and Boston have started running ‘Hack Day’ events and competitions, in which individuals and companies are challenged to find innovative uses of public data. This has resulted in the creation of various apps that have improved the transparency and presentation of the data, making it easy for citizens to understand and re-use the data in research. For example, The Knight News Challenge in the USA received over 800 project proposals for uses of government data – 14 of which were then provided with funding to allow their creators to produce fully functioning apps.18 Projects included the Chicago Crash Browser. This uses the city’s Transport Department data on pedestrians or cyclists injured by motor vehicles to determine where the city should invest in infrastructure upgrades to eliminate traffic accidents.

Hack Days illustrate how the demand for data can be increased through engaging with individuals and companies to develop apps that present data in user-friendly ways. This not only raises awareness of what data is available, it can result in highly innovative uses of the data and can save governments money as they don’t have to organize the data themselves. The resulting apps also allow subsequent users to immediately re-use the data, without first having to find the resources to link/organize the data themselves.

Hack Days have been run in the UK but they have had limited success. Typically, they generate a short-term boost to open data interest and use, but because these ideas are not funded or promoted more widely they don’t get developed.19 To get the most out of Hack Days funding needs to be available from either public or private sponsors to ensure programmes that could have significant positive impacts are taken forward. Cities themselves could set up local interest groups to explore existing public datasets to discover how these could be used to provide new insights, savings or proto-types reflective of their city’s needs.

To ensure the full benefits of following an Open Data Policy are realised, it is vital the Government engages with organisations such as think tanks, academic research institutions, IT and engineering companies not only to gauge the existing demand for data but to promote awareness of data that has already been released as well as data currently held but not yet released. Improved awareness and use of existing data will also help create opportunities to link current data, extend current data collections and expose duplications and inaccuracies in current datasets, leading to improvements in the efficiency of data gathering in the future.