01The relocation of BBC activities to Salford

The decision to move part of the BBC’s national operations to Salford Quays (now named MediaCityUK) in Greater Manchester was taken in 2006. One of the stated reasons for the move was economic, with predictions stating that up to 15,000 jobs would be created, both within the BBC and externally as a result of its commissioning activities and wider demand for services such as hotels and retail.6 The move of jobs started in 2011, and placed the BBC at the centre of a longer term regeneration scheme of the Salford Quays area (see Box 2).7

Box 2: The regeneration of Salford Quays

The BBC is located in Salford Quays, which until 1982 was the site of the Manchester Docks. Following the closure of the Docks, Salford City Council purchased the site. The area was rebranded Salford Quays and redevelopment began under the Salford Quays Development Plan. Thanks to public funding and private investment, a great deal of development has occurred on the site, such as the improvement of its water quality, development of retail, housing and office space, the opening of Imperial War Museum North, the building of new roads and footbridges and the connection to Manchester City Centre by the Manchester Metrolink.

This report looks specifically at the impact of the BBC on the local economy, and does not comment on the wider merits of this longer-running regeneration scheme.

The following analysis looks at the impact that the BBC move had on jobs in Manchester. It does not provide a cost-benefit analysis, and does not look at any potential negative impact on London of moving these jobs away from the capital or impacts on the BBC’s output. Box 3 sets out the definition of MediaCityUK and its surrounding areas.

We also note that some of the economic benefits of the move may continue to play out in the future, but five years provides a reasonable time frame to explore what impacts there have been to date.

Box 3: Definition of MediaCityUK and its wider area

To analyse the impact of the BBC on its surrounding area three geographies have been drawn as shown in the map below. The first is the MediaCityUK site itself, which hosts the BBC. The second and third are 1 and 2 mile concentric rings, with the distance measured from the BBC’s offices (rather than the centre of the MediaCityUK site) based on the assumption that proximity to the BBC would be an important consideration for any business drawn to the wider area. 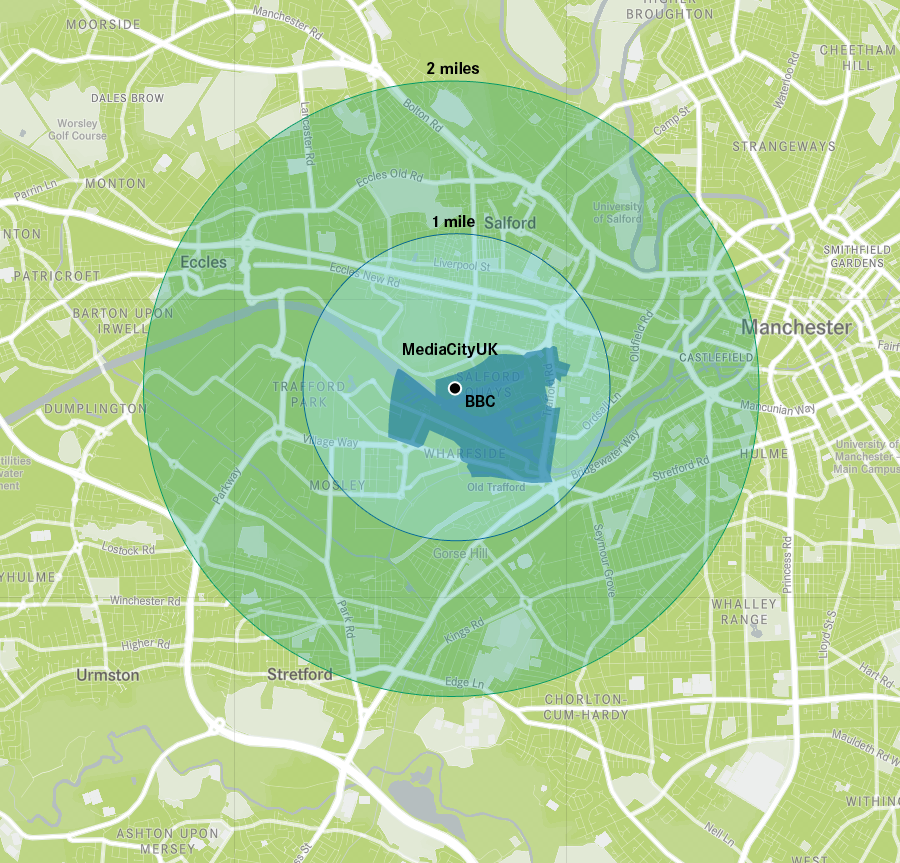 Between 2006 and 2011, the total number of jobs in MediaCityUk fell by around 930, led by contractions in publicly-funded and manufacturing sectors . The number of media jobs (TV, radio and other media sectors) did rise, but this increase was small and meant that by 2011 there were only 186 jobs in these activities. The real impact came after the actual move of the BBC.

Nationally over this period the media sector in Britain struggled, with the total number of jobs in these industries falling by 8.3 per cent. They also fell in Greater Manchester, but at -7 per cent this fall was slightly lower than at the national level.

The opening of the BBC campus did create jobs in MediaCityUK 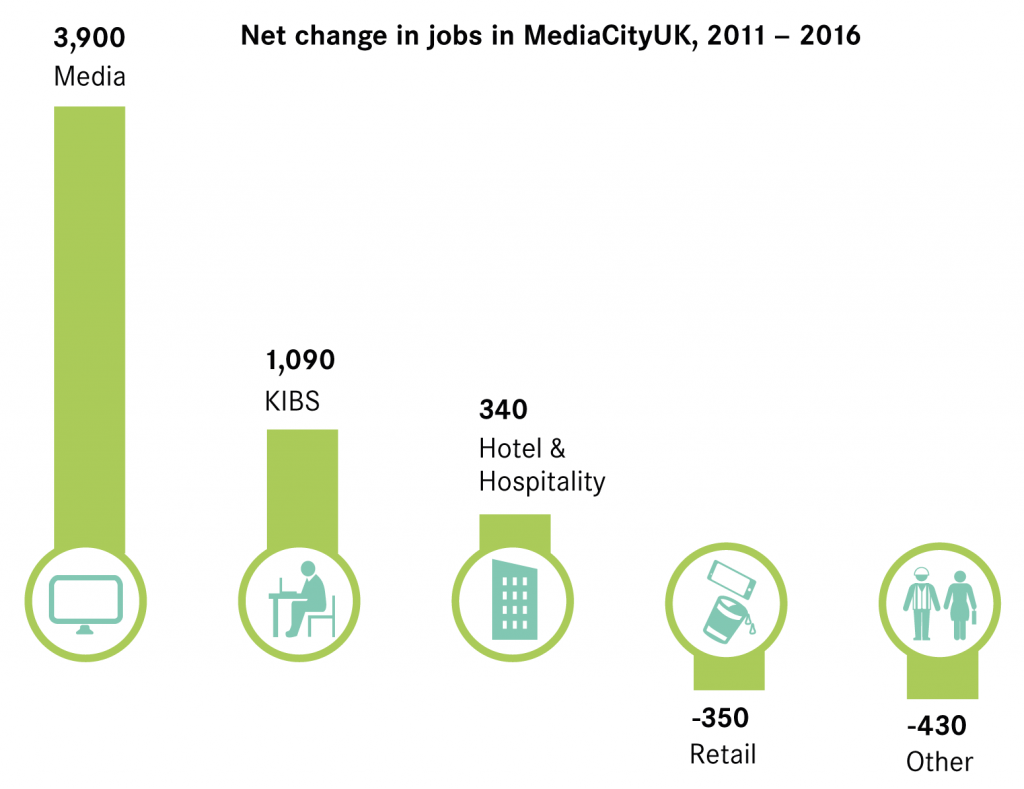 This of course was partly driven by the movement of the BBC jobs. Publicly-quoted figures suggest that when the BBC’s national operations in Salford opened in 2011 there were around 1,400 positions.9 This has since risen to 2,000.10 Removing the employment gain associated with the initial national BBC move shows there was still an increase of around 2,000 jobs in the sector in MediaCityUK.

Figure 2 also shows that growth in other industries that were expected to have benefited from the BBC’s relocation, such as hotels, were more mixed. Jobs in hotels and hospitality increased by around 340, but the number of jobs in retail fell by around 350.

But many of these jobs were relocated from elsewhere

Figure 3: Breakdown of ‘new’ jobs in MediaCityUK in 2016 by origin of business

The number of jobs that moved from elsewhere in Greater Manchester was much larger. Over 1,200 jobs were in businesses that moved to MediaCityUK from elsewhere in the combined authority (of which around 990 were in related industries). Of these jobs, publicly-available data suggests that around 640 of them were the result of the BBC moving its local operations from Oxford Road in Manchester City Centre.

The result is that displacement played a large role in the total increase in jobs. When we include the BBC jobs, around 3,365 jobs in the area in 2016 were in businesses that were based outside MediaCityUK in 2011. This is equivalent to around three quarters of the total net new jobs created in the area in the five years to 2016.

The final category is jobs in businesses set up since 2011. Around 1,500 jobs were in these new businesses. Splitting this category into related and unrelated sectors shows that 860 were in related industries, and of this 370 were in media businesses.

Putting this together shows that of all the businesses in MediaCityUK in 2016 that were not there in 2011, those in industries in or related to the BBC accounted for around 5,400 jobs. Of these jobs:

There has been little measurable impact beyond MediaCityUK

While there has clearly been an impact of the BBC move within MediaCityUK, there is little evidence of this stretching much beyond the immediate site.

Figure 4: Change in jobs by industry group in and around MediaCityUK, 2011-16 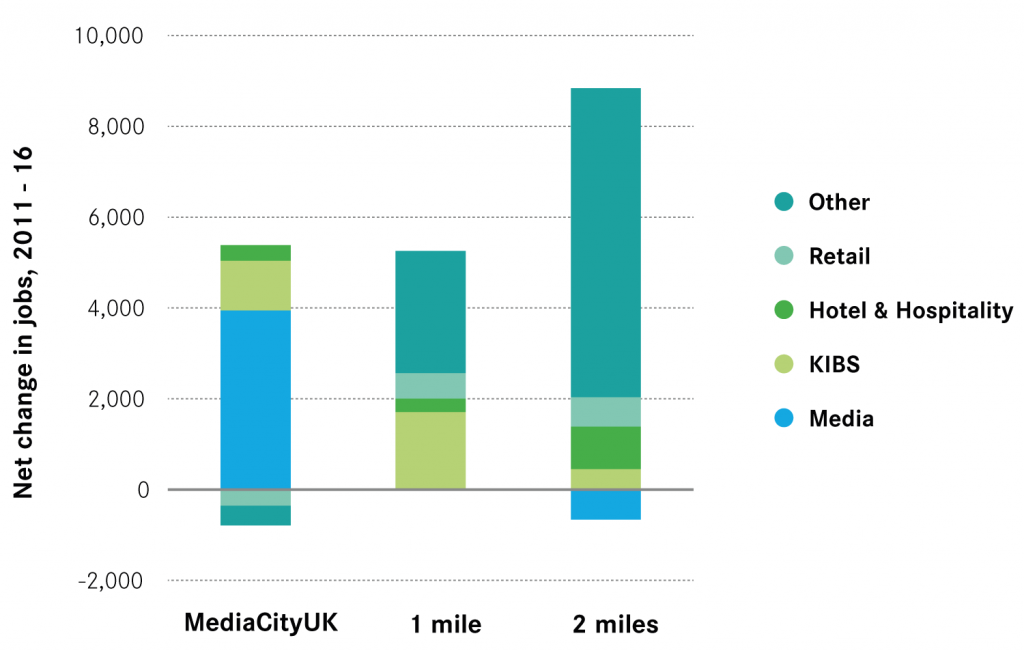 What impact there has been is most obvious when looking at media jobs. While there was a large growth in jobs in this sector in MediaCityUK, as shown in Figure 4, there was a decline in the number of media jobs in the rest of Greater Manchester over the period. Looking specifically at the 1 mile ring around MediaCityUK showed that there were no media businesses located in the sector in 2011 in the area, and this remained the case in 2016.

The chart shows that there was an increase in the number of jobs in hotels and hospitality in the immediate area surrounding MediaCityUK, which could be linked to the activities of the BBC. The one mile ring also experienced growth in retail jobs. But as MediaCityUK saw a decline in this type of jobs, where we would expect the effect to be the strongest, the link between the BBC move and the rise in this type of jobs in the surrounding areas does not appear to be so clear.

There was also growth in the number of jobs in the knowledge intensive based activities (KIBS) in the one mile ring. Breaking this down by jobs that are either related or unrelated to the media industry shows that, of the total net increase of 1,710 jobs, a maximum of 490 jobs were in related industries. Whether or not this was the result of the BBC’s move remains difficult to say.