02A fiscal map of Britain

This section sets out what the geography of tax raising looks like across Britain.

In 2013/14 around £548 billion of tax was raised in Britain. As Figure 1 shows, this total came from a variety of different sources. Around half of the total was accounted for by taxes on workers – namely income tax and national insurance.5 Taxes on consumption (VAT) accounted for 19 per cent, while taxes on land and property and investment accounted for 11 and 10 per cent respectively.

All of these taxes are dependent on the growth of the economy and are levied on activities that governments are likely to want to encourage e.g. job creation. In the analysis that follows we refer to them as ‘economy taxes’. This is in contrast to ‘other’ (which accounts for 13 per cent of spend). This category includes taxes on ‘bads’ such as alcohol and tobacco duty which policy is unlikely to encourage. 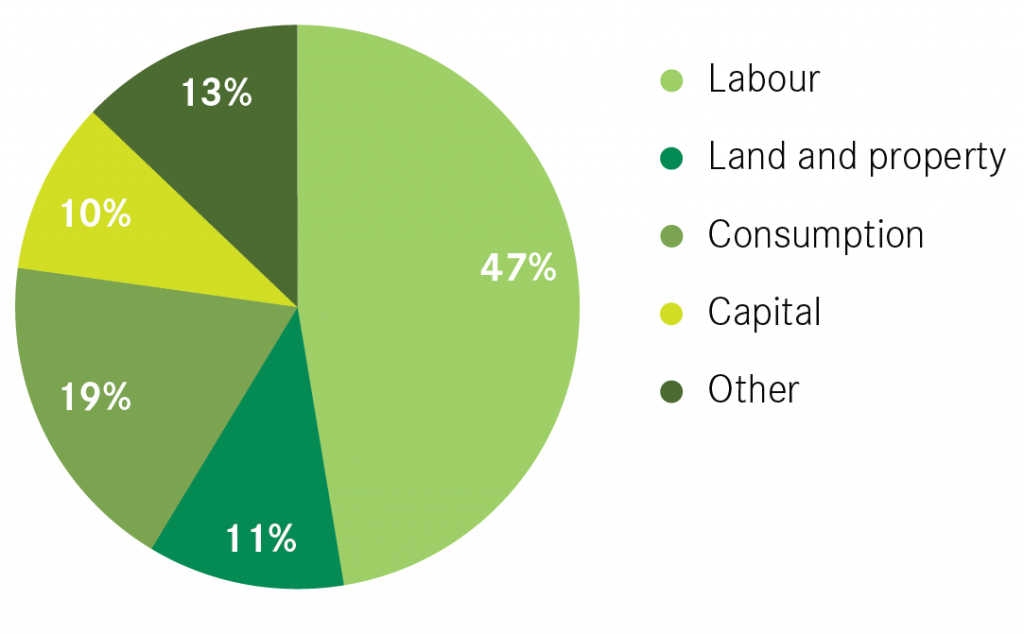 Unsurprisingly, the core urban authorities in central London, Birmingham and Leeds make the largest absolute contribution to the national Exchequer. The City of London (£24 billion) and Westminster (£20 billion) were by far the highest generators of economy taxes, with the former generating around double the amount of third placed Tower Hamlets (£12 billion). Birmingham generated £7.5 billion, while Leeds generated around £6 billion. Reflecting this, cities tend to raise more tax than non-city areas. In total, cities accounted for 64 per cent of all economy taxes raised despite covering just 9 per cent of land.

As well as having the highest absolute amount of economy taxes raised, the City of London had by far the highest tax raised per worker, raising £60,000 for every job. It was followed by its fellow London boroughs Tower Hamlets (£48,000), Islington (£31,000), Westminster (£29,000) and Kensington and Chelsea (£27,000). A number of local authorities to the west of London, such as Windsor and Maidenhead, Spelthorne and Runnymede, also had high levels of tax raised per worker. Despite the strong performance of these particular non-urban authorities, urban local authorities on average raised a higher amount of tax per worker than were generated elsewhere in Britain – £18,400 in the former compared to £15,300 in the latter.

The principal driver of these patterns was tax on labour. Whereas at a national level labour taxes accounted for 47 per cent of all economy taxes raised, in places such as the City and Tower Hamlets they accounted for 83 and 81 per cent respectively, reflecting the clustering of high-paid jobs in these areas.

Land and property taxes play a much smaller role in tax take. On the whole it is council tax that is the largest contributor in this category. The main exception is in core urban local authorities such as Manchester, where business rates make the largest contribution. Interestingly, Kensington and Chelsea raised the greatest share of its taxes from property taxes, with a quarter of all taxes generated by land and property, compared to the national average of 11 per cent. This was driven by an unusually high stamp duty tax take, the result of expensive residential property in the borough.

The evolving policy context around devolution means that while looking at tax spend on a local authority basis is interesting, looking at groups of local authorities based around cities is likely to be more relevant in light of recent developments.

The Chancellor has made it clear that if devolution is to take place, powers will be devolved to combined authorities. Below we have aggregated local authorities to reflect these issues. To do this we have followed a two-step process. Firstly, we selected places that have a combined authority in place or have a proposal to create one. Secondly, for all other cities not captured by this definition, we have taken the LEP area that they are a part of. 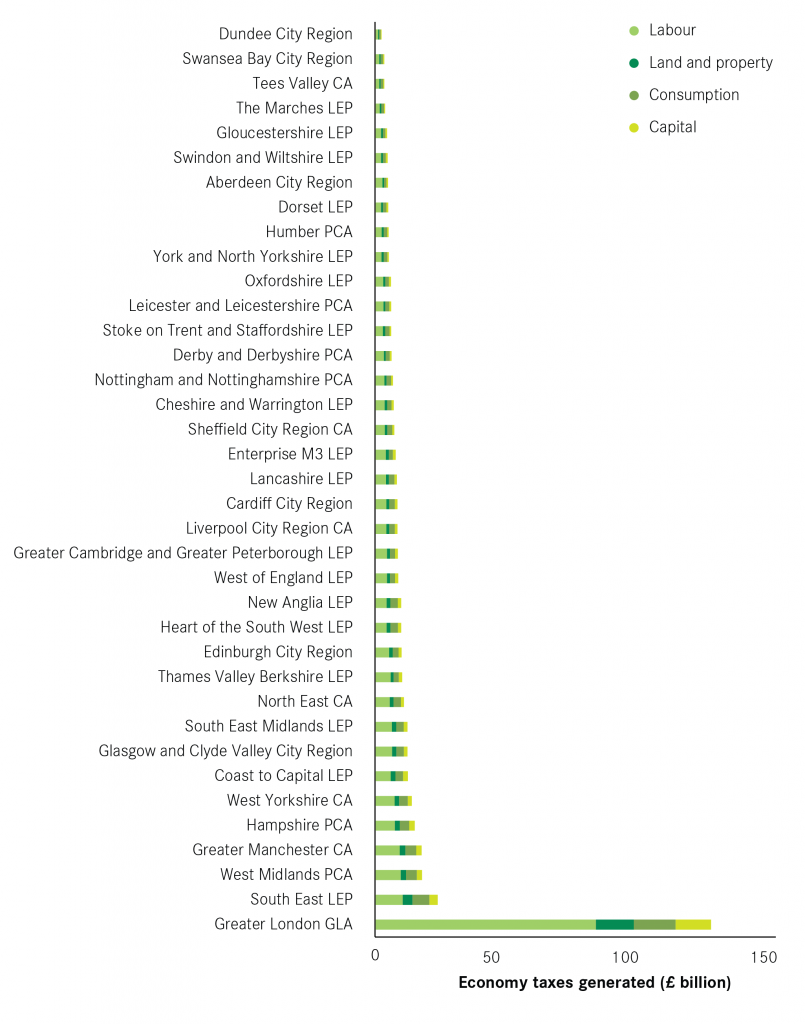 Figures 4 and 5 present the data on these geographies. Greater London generated by far the highest amount of economy taxes, amounting to £126 billion in 2013/14. This was a quarter of the total economy tax take in Britain, and equal to the next eight highest placed areas combined. Meanwhile, at £2.4 billion Dundee City Region generated the smallest amount. 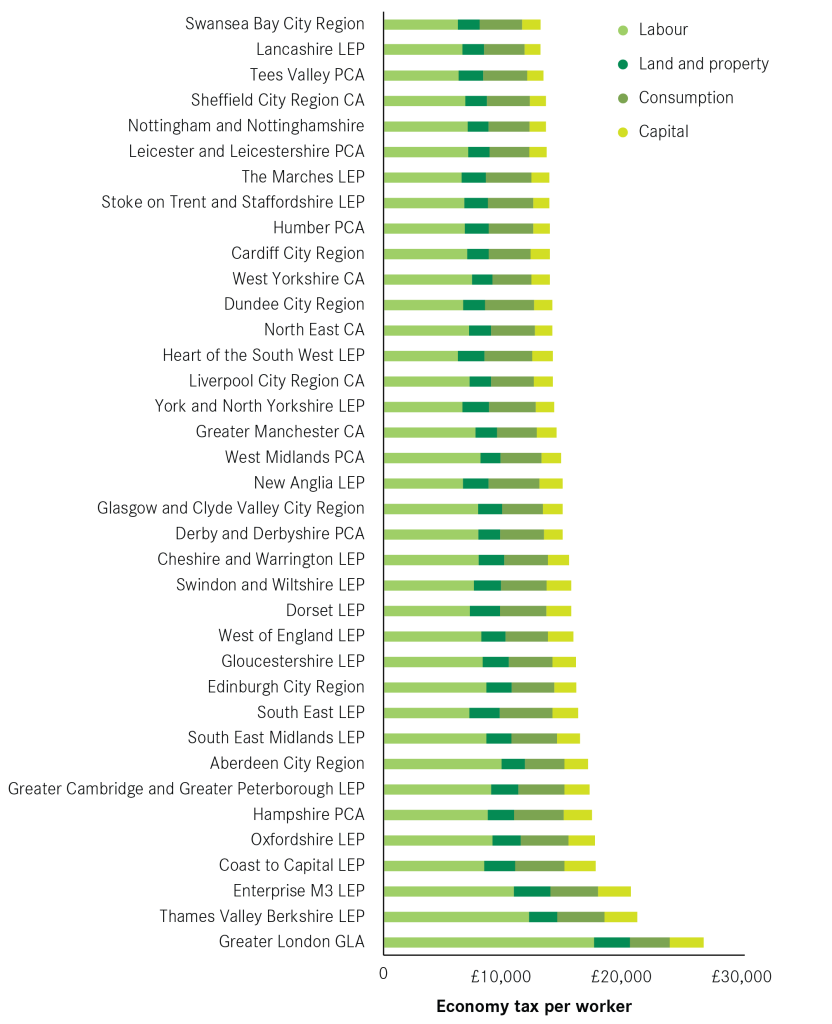 Reflecting the patterns seen in the local authority data, the top seven areas for economy tax take per worker are all in the Greater South East. At £26,600, Greater London had the highest, followed by Thames Valley Berkshire, Enterprise M3 and Coast to Capital. Meanwhile Swansea Bay City Region, followed closely by Lancashire LEP and the proposed Tees Valley combined authority, had the lowest – the average worker in Greater London generated double the amount of tax of workers in these two areas.

Despite making a large contribution to the overall tax take of Britain, the current or proposed combined authorities in Greater Manchester, the West Midlands and West Yorkshire have below average levels of economy taxes per worker. Oxfordshire, on the other hand, makes a much smaller absolute contribution but had the fifth highest level of economy tax take per worker. This points to the lower productivity of jobs in the former areas relative to the latter.

Where there is overlap between LEPs local authorities have been assigned to one LEP. Details are given in the appendix.