03London’s links to other cities

This section looks at the links that London’s financial and associated professional firms have to jobs in other cities across Britain. It finds that these links are strong with a number of other cities, but this is mainly dominated by finance, with links in other professional services being less prominent.

London’s role in the UK economy

London plays a significant role in the UK economy. In addition to the export data above, it accounts for 26 per cent of output and it raises 30p of every tax pound generated for the Exchequer.1 In terms of jobs, it was home to just over 21 per cent of all of Britain’s jobs in 2017.

The influence of London-headquartered firms spreads beyond the capital. Around 1.9 million jobs were based in such businesses in 2017, accounting for 5.8 per cent of British jobs outside of London. Together, this meant the total share of jobs either based in or linked to London across the British economy was 29.5 per cent.

London’s financial and associated professional services links to other cities

In total, all London-headquartered businesses accounted for 1.9 million jobs elsewhere in Britain in 2017, with just over one million being in cities. This amounted to around one in every eight private sector jobs in cities outside of London.

London’s financial firms in particular play a prominent role in the economies of other cities. Just over one in five finance jobs in other cities was in a London-headquartered business. But this varies across cities (see Figure 4). In Norwich, two thirds of financial sector jobs in the city worked for a London-headquartered business. It was closely followed by Telford – although finance plays a small role in the city’s economy (2.7 per cent of all jobs), 65 per cent of finance jobs were linked to the capital – and by York (53 per cent). 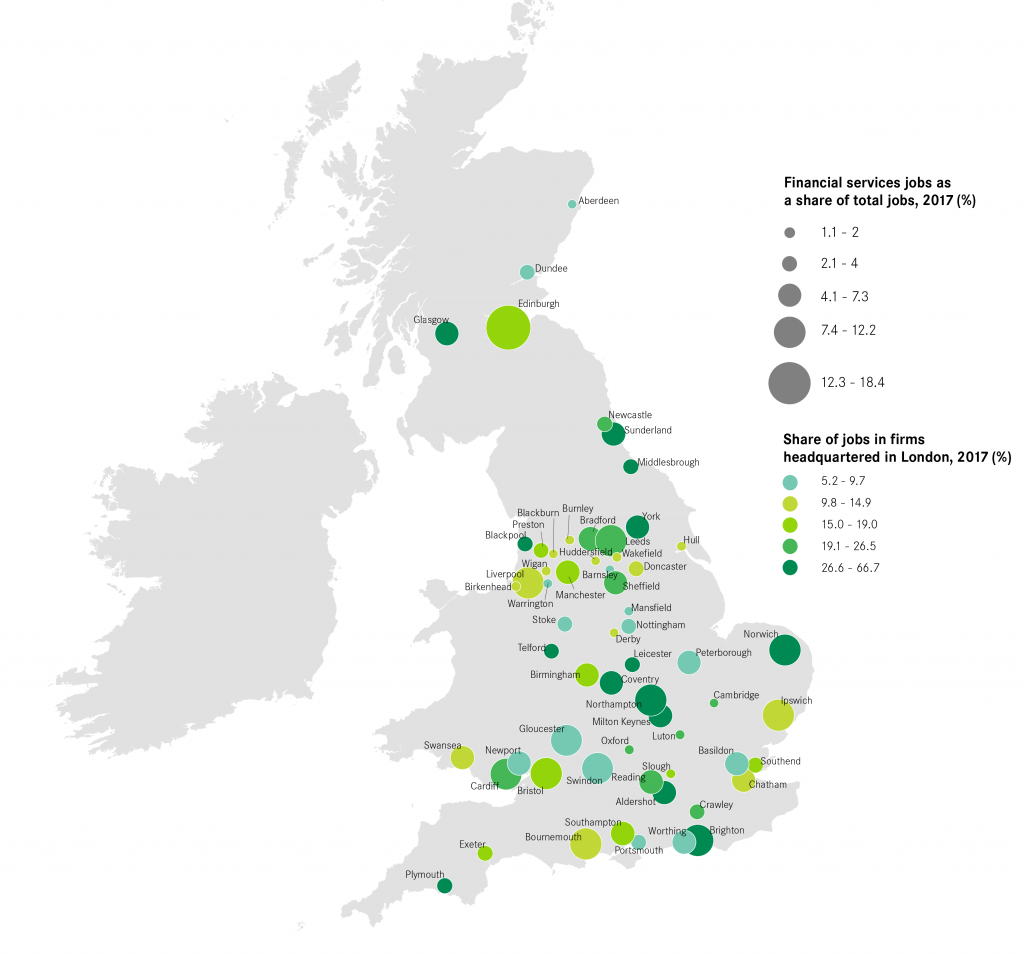 In contrast, other cities have much weaker financial services links to London. The lowest was Warrington with 5 per cent, but cities with considerable financial sectors like Bournemouth and Gloucester also had small direct links with London, at 9 per cent and 11 per cent respectively. 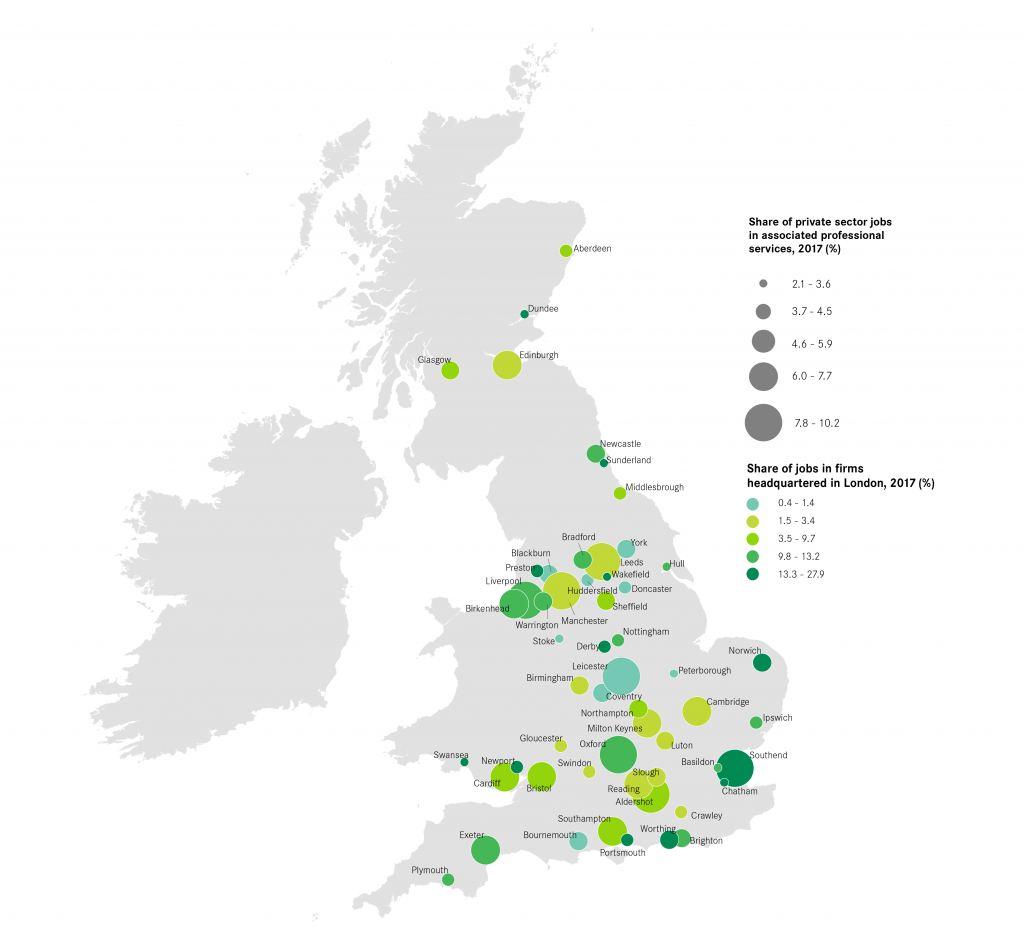 For related professional services, there does seem to be a slightly closer relationship than finance has between size of city and links to London. Cities like Leeds, Manchester and Birmingham all have closer links to London than many other cities, and the first two also have professional services as a large share of total employment. Gloucester had the closest links, followed by Swindon and Milton Keynes (both 25 per cent) and Cambridge (21 per cent). Unlike finance, a number of cities had no or very few links to London in this sector, including Burnley, Mansfield and Wigan.

Looking at data by sector reveals little of the skill level or types of jobs linked to London or their economic performance. Barclays, for example, has its investment banking activities in Canary Wharf, but its call centre activities in Sunderland.

Using data on the occupations in these sectors across cities gives an estimate of the skill levels of London-linked jobs. Over half of finance and related professional services jobs in cities were high skilled,3 suggesting overall that London finance and professional firms play an important role in providing high-skilled employment in other cities.

However, there is no association between the productivity of finance in cities and London’s links with the financial sectors of these cities. Instead, reflecting the variation in productivity shown above, the nature of the jobs linked to London varies across cities, as shown in Figure 6. Note that London links are now represented by size rather than colour. 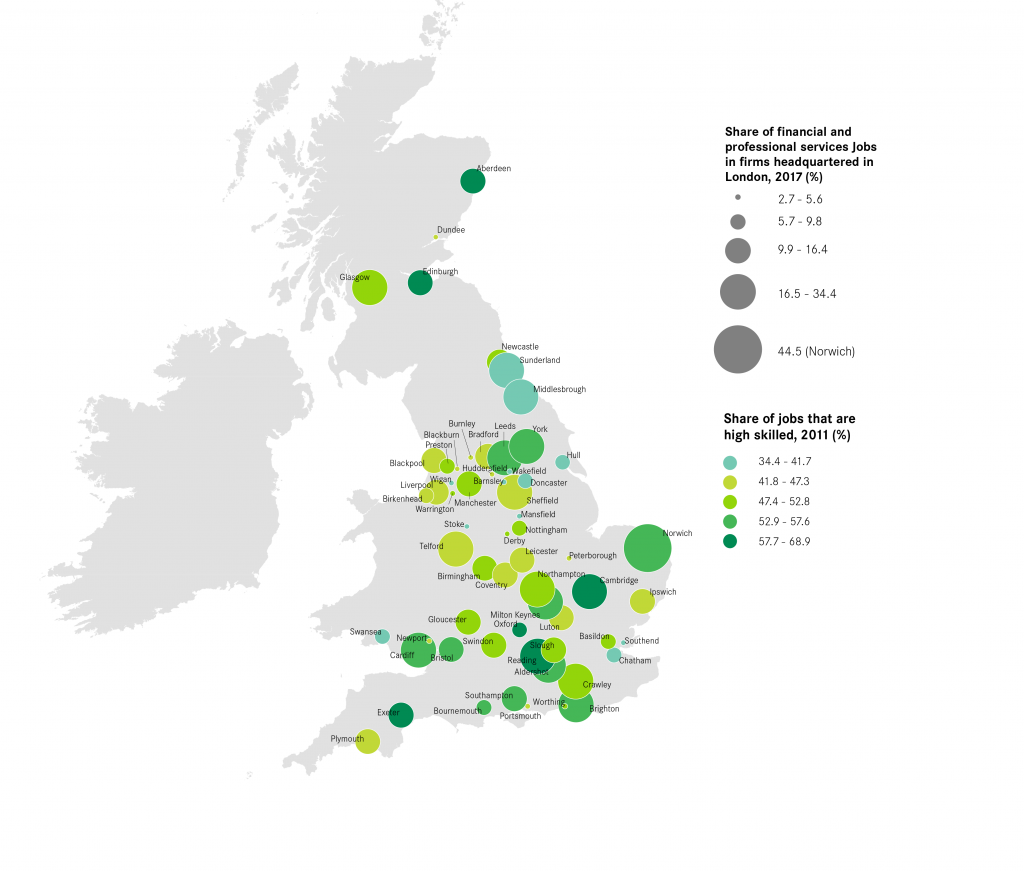 Some cities close to London such as Milton Keynes and Aldershot have a combination of high productivity, a large share of finance jobs connected to London, and high-skilled financial jobs – the larger, darker circles. A few other cities such as Edinburgh and Leeds also show evidence of this mix of jobs and output in financial services.

In contrast, while many cities such as Telford and Middlesbrough also have a high share of their financial and associated professional services workforce linked to London, a much greater share of these jobs is in lower-skilled occupations – the large, lighter circles. This suggests that financial employment in these cities plays a supporting role, such as retail bank sales or customer services, to high-knowledge and high-value added financial and associated activities in London.

Splitting cities into quadrants helps to classify the nature of their financial services links to London. As Figure 7 shows:

Each city’s quadrant can be found in the Appendix.

Of the cities in the high-skilled, close-links quadrant, only three (Reading, Cambridge, and Aldershot) have lower financial services employment than the UK average. This suggests that in cities with close links to London and more high-skilled jobs in finance, those links are important drivers of cities’ high-skilled employment.

Figure 7: Financial services jobs in cities and their links to London 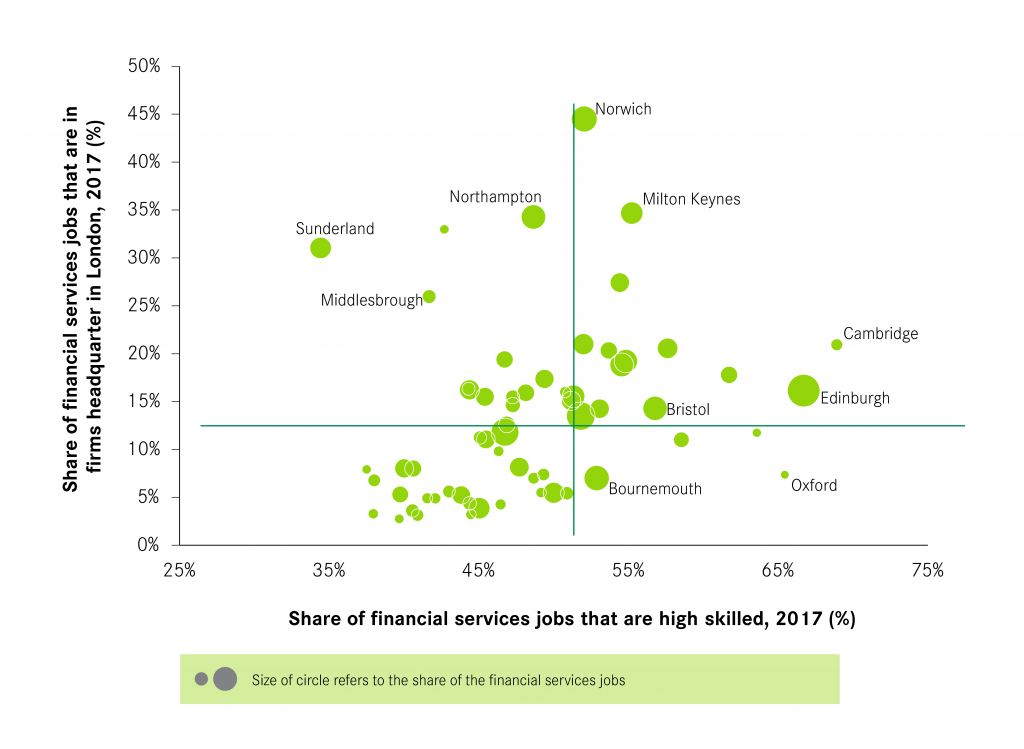 As is the case for all cities, London’s links to the Core Cities varies.

As noted earlier, Core Cities play a more prominent role in associated professional services. Cities like Leeds, Birmingham, Manchester and Cardiff all have above-average shares of associated professional services in their economy, and their London links in that sector are above average (10 per cent) too at 18, 14, 14, and 13 per cent respectively.

Across both financial and professional services, the characteristics of these roles change across these cities with no clear pattern, although the Core Cities do appear to be underperforming. While Bristol is above the average with 57 per cent of these jobs being high skilled, and Leeds and Cardiff match the national average at 55 per cent, this figure is lower at 45 per cent in Liverpool, and the other Core Cities trail the national average too.

Variation in performance of the same sectors across cities can be explained by the benefits that different cities offer to businesses. High-productivity cities offer a number of benefits, including access to a large pool of high-skilled workers and a network of high-value businesses. There is a cost to accessing these benefits, such as higher costs of office space and more congestion. For example, one in two residents in London has a degree (the fifth highest of all UK cities), but the capital has by far the most expensive commercial space of any city.4 The patterns of productivity above suggest that these businesses are prepared to pay these costs to access the benefits that particular cities offer.

Lower-productivity cities also offer a number of benefits. While they do not offer as much access to knowledge (i.e. high-skilled workers and a network of high-knowledge businesses), they do offer access to lots of workers and cheaper land. For example, in Middlesbrough, just under one third of working age people have a degree (42nd out of 63 cities), while it has the seventh cheapest commercial space of any city in England and Wales – per square metre, space costs one fifth of the cost in London.