In May, voters in Liverpool City Region will return to the polls to elect their second metro mayor. After a four-year first term extended by the pandemic, the mayor will be elected for a three-year term before the cycle returns to four-yearly elections in 2024.

Introduced for the first time in 2017, this new institution has significant executive powers and funding to make strategic decisions over the city region, allowing for policy to be better tailored to the local economy. In recent polling by Savanta ComRes for Centre for Cities, 84 per cent of voters were aware there was a mayor, and 22 per cent of voters could correctly identify Steve Rotheram as the current city region mayor. 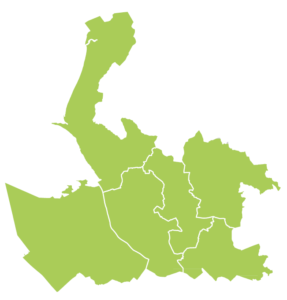 Liverpool City Region covers the local authorities shown in Figure 1. Data on the Liverpool City Region’s economy and how it ranks compared to other metro mayor areas can be found in the factsheet, and data for the primary urban areas of Liverpool and Birkenhead is available in City Monitor, the High Street Tracker, and the UK Unemployment Tracker.

This policy briefing sets out three policy priorities for the metro mayor. The city region entered the Covid-19 pandemic with high levels of unemployment, and the number of people claiming unemployment-related benefits has increased by a further 34,000 since March 2020. While Centre for Cities expects the bounce back from Covid-19 to be swift, the city region’s challenges pre-pandemic will continue to be an issue post-pandemic. And so the priorities set out in this briefing focus on tackling these challenges.

They are to create jobs to lift Liverpool City Region up to the national average for employment; prepare young people for the labour market; and make urban travel easier without cars by reducing congestion and improving the buses.