01The problem of regional inequality

At the extremes, London’s output is 2.5 times that of the North East of England. And while London is exceptional, the differences between the remaining regions are still significant (up to 50 per cent) as shown in Figure 1.

Figure 1: There are significant differences in economic performance across the country Regional GVA per head of resident population, 2018 (£000s) 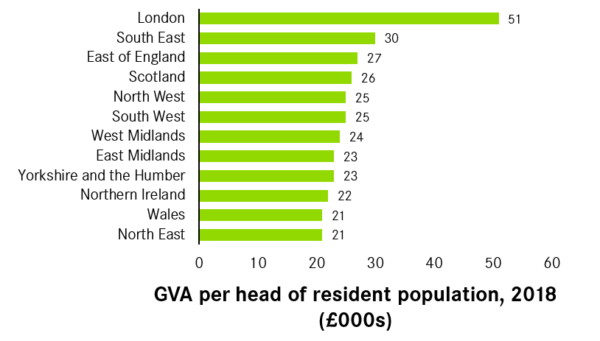 To illustrate the extent of these differences, the output per head of the South East during the first lockdown of the pandemic is similar to that of Wales in normal times (assuming the impact of the first lockdown at 35 per cent).1

On top of that, recent research by Centre for Cities revealed that the economic impact of the pandemic is now making the task of levelling up these inequalities even more challenging.2

Some of the differences in economic performance across the country stem from the different roles different places play in the national economy. The ability of different parts of the country to create and attract high-value firms and jobs, and hence drive productivity, varies between urban and rural areas, with urban areas best placed to do so. Expecting the South West – a predominantly rural region – to perform in the same way as the Greater London urban area does, is simply unrealistic.

Whilst many of the urban areas that are currently underperforming are in the North and Midlands, the divide is not simply due to geography, nor is it the case that all cities in the North are struggling.

This point can be illustrated by looking at two cities: Bradford and Leeds, which while they are only eight miles apart, look very different economically. Leeds has a larger share of population of working age, and people in Leeds are more likely to have more qualifications – only 6.7 per cent of its population has no qualifications, half the share in Bradford. The population in Leeds is also more likely to be in employment, Bradford’s employment rate is eight percentage points lower than in Leeds. People in Leeds also have higher wages, with average weekly earnings of £561 compared to £538 in Bradford.

These differences in industrial structures between Leeds and Bradford have not always been there. Up until the mid-1950s, the composition of jobs in both places was fairly similar with Leeds having marginally more jobs in services exports and Bradford having a larger share of jobs in goods exporting sectors. During the 1950s an important divide opened up as the share of service exporting jobs began increasing much more rapidly in Leeds than Bradford.

The example of Leeds and Bradford demonstrates that the regional inequalities we see are not simply due to geography but to the ability of cities in different parts of the country to respond to economic change and reinvent themselves.

If the country’s underperforming cities closed their output gap, the UK’s economy would be £69.9 billion larger.3 And, in particular it is the underperformance of the largest cities after London that is the biggest barrier to achieving the levelling up ambition. The eight largest cities after the capital account for 70 per cent of the above-mentioned output gap. Improving their economic performance to be in line with European counterparts would be equivalent to adding two extra economies the size of Newcastle to the national output.3

Over the past few decades, the UK has shifted towards a high-value added economy, but, as previous research by Centre for Cities highlighted, not every city has been able to adapt to this change.5 The high-value service and manufacturing businesses that drive productivity and economic growth prefer to locate where they can have access to shared infrastructure, a large pool of high-skilled workers and similar businesses with which to share ideas and innovate. But while cities are on average better placed than rural areas to offer these benefits, there has been significant variation in cities’ ability to attract these businesses. Those who have been able to attract these businesses, such as Leeds, have adapted and reinvented themselves, gradually becoming more economically successful, while other places, like Bradford, which have struggled to do so, have attracted fewer high-value businesses and hence have a weaker economic performance.

Also, the majority of policy interventions aimed at helping places to grow have tended to reinforce the existing industrial structure of different places by supporting low-knowledge routine activities to reduce unemployment, as opposed to supporting the reinvention of cities by increasing their attractiveness to more knowledge-intensive businesses. As a result, in many cities in the North, jobs in declining manufacturing and production industries have been replaced by low-skilled routine jobs which are vulnerable to foreign competition and technological change, with call centres and distribution sheds replacing cotton mills and dockyards.

And in more recent years, in order to improve the economic performance of regions, places have been encouraged to develop ‘industrial strategies’. But this policy has also not proved successful in raising the level of regional economic growth as many regional bodies have neither had the skills to assess the global competitive strength of firms in different sectors in their areas, nor the resources to support firms in different sectors.

On top of that, national policies aimed at promoting innovation over the past 50 years have been skewed towards particular places. Resources and investment around research and innovation have not been spread evenly across the country but concentrated in the Greater South East. Currently, just three sub-regions of the UK – Oxford and its environs, Cambridge and its sub-region, and inner West London – account for 31 per cent of all R&D spending in the UK. Public sector R&D is even more concentrated with 41 per cent taking place in these regions.6

This has obvious implications for policy-making. It means that we will only be able to level up the underperforming regional economies by creating more high value-added, knowledge-intensive firms and jobs in their largest urban areas. And this will mean finding a way to get more R&D done in them.

It is also interesting to note that the US is facing a similar problem to the UK. In the last 40 years, the innovation sector in the US, comprised of the nation’s highest-tech, highest R&D, advanced industries, which contribute inordinately to prosperity, has become concentrated in a short list of superstar metropolitan areas.

Just five top innovation metro areas – Boston, San Francisco, San Jose, Seattle and San Diego accounted for more than 90 per cent of the nation’s innovation-sector growth during the years 2005 to 2017. As a result, politicians and policy analysts in the US are also looking at how they can direct more R & D funds to older industrial areas in order to level them up economically.