3: How Nottingham has made ambitious policy moves to improve bus services

In Nottingham, if buses become caught in traffic and passengers switch to another mode or stop travelling, this has an immediate financial impact on the municipally-owned bus operator and therefore the local authority. Nottingham has some of the most advanced bus priority measures to maintain speeds and journey time reliability:

Charging car commuters. Nottingham is the only city to have introduced a Workplace Parking Levy — a £415 annual charge for each parking space on businesses (except retail) with more than 10 parking spaces. This encourages car commuters to use alternative means, reducing traffic levels that allow bus services to run more reliably and subsidises extra bus services.

Bus lanes. In Nottingham the main routes into the city which become congested at peak times have bus lanes. On one route at rush hour, buses make up just 5 per cent of the traffic but 48 per cent of the people.47

The city’s bus patronage has remained stable even as bus ridership has fallen elsewhere in the country (see Figure 4) and while it has expanded its tram network. In other cities such as Greater Manchester, growth in tram ridership has reduced bus patronage. 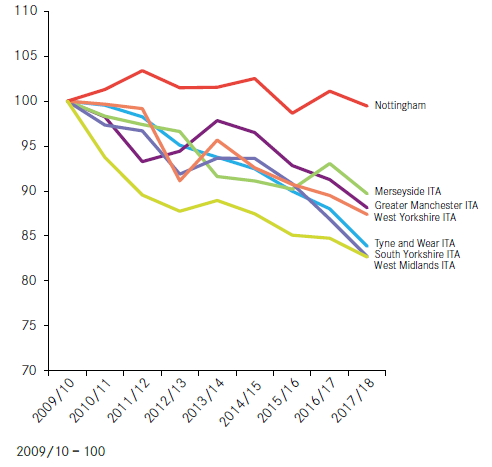