Greater Manchester Combined Authority covers the 10 local authorities in Figure 1. Data on the Greater Manchester economy and how it ranks compared to other mayoral areas can be found in the factsheet, and for Manchester and Wigan primary urban areas in City Monitor, High Street Tracker, and the UK Unemployment Tracker. 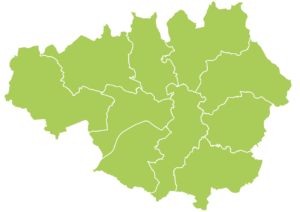 The city region entered the Covid-19 pandemic with above average levels of unemployment, and the number of people claiming unemployment-related benefits has increased by a further 70,000 since March 2020. While Centre for Cities expects the bounce back from Covid-19 to be swift, the city region’s challenges pre-pandemic will continue to be an issue post-pandemic.

The headline challenge for Greater Manchester is to improve the performance of its economy. Unlike similar large urban areas in Western Europe and the US, Greater Manchester lags behind the national average in terms of productivity, a key determinant of prosperity and jobs. Conservative estimates by Centre for Cities estimate that the city region is £16 billion per year smaller than it should be.1

The overriding economic goal for the next mayor should be to put policies in place that aim to reduce this gap by one third over the next decade. This briefing sets out the three priorities that the mayor should implement to help achieve this goal. They are: a continued focus on improving Manchester city centre; improving public transport and reducing local congestion; and improving the provision of skills and education in the city region. In addition, the Government should look to advance devolution in Greater Manchester still further.