Using Census data once again, Figure 26 shows the net flows between London and other cities in England and Wales by age. Between 22 and 25, the capital sees a net inflow from almost every other city. This changes for the 31 to 45 age group, when it loses population to a number of cities. 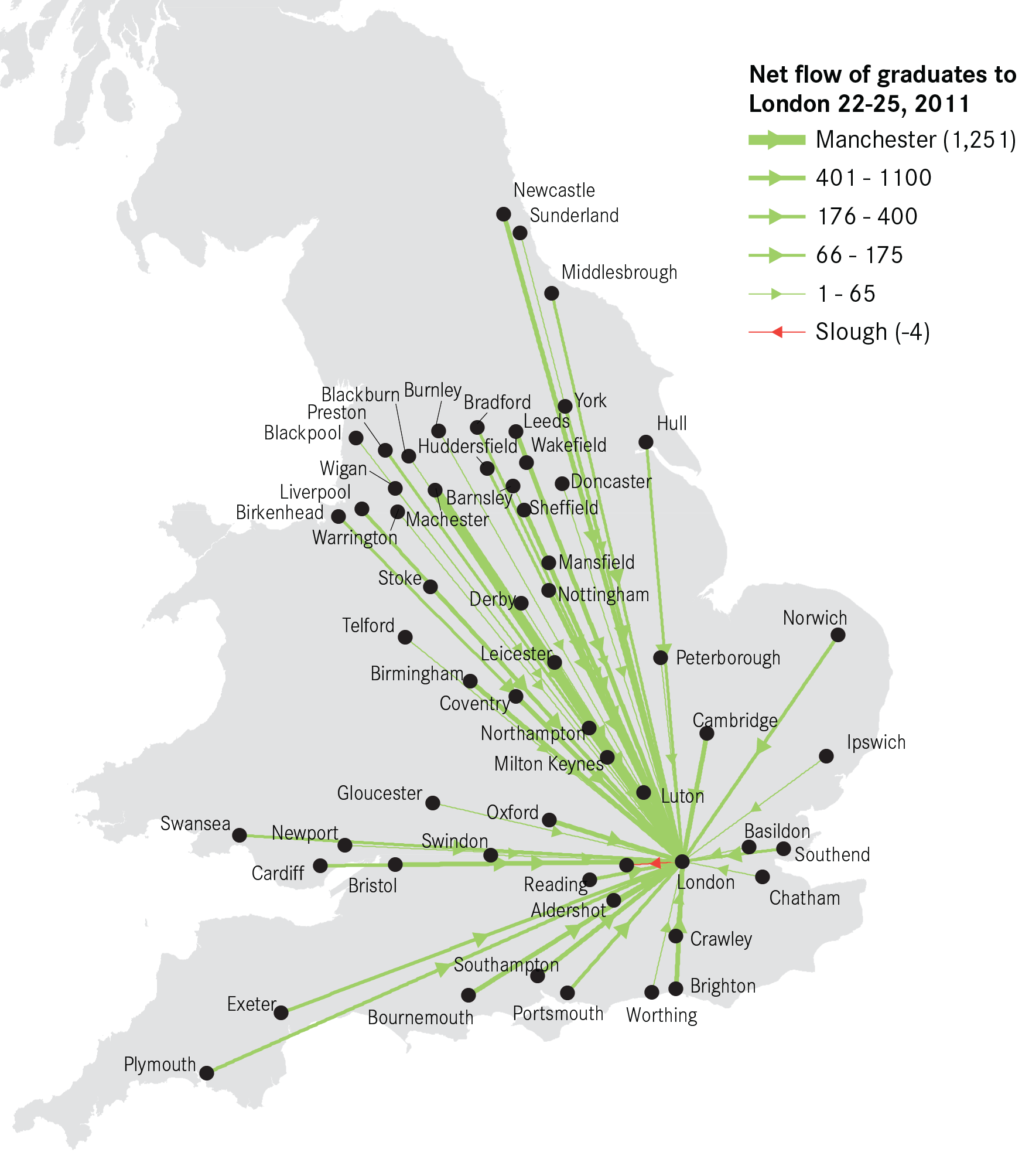 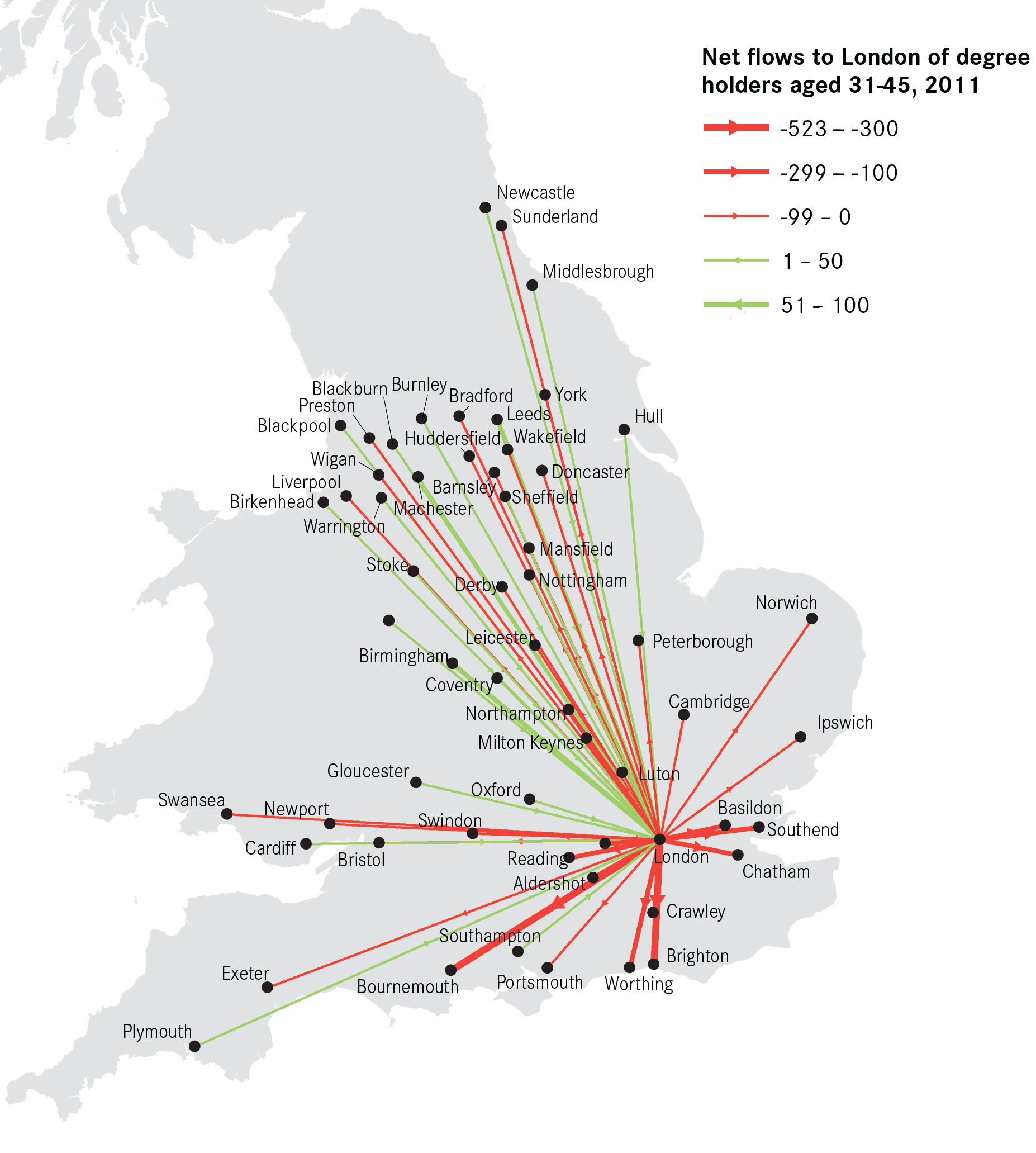 There are several points to note from these patterns.

London still gained older degree-holders from some cities, including Birmingham and Leeds, but the majority of cities (37 out of 57) saw a net inflow of older graduates from London.

For many other cities, the number of older graduates they attract from London is dwarfed by the number of younger graduates they lose to the capital to work. Cities such as Bristol, Nottingham and Manchester each lose around 30 per cent of their young graduates to London, but do not attract older degree-holders back to their cities on anywhere near the same scale, attracting less than half the number in return.

Cities across the UK have introduced initiatives with the aim of retaining a greater share of graduates in their city after they have completed their studies, and attracting those graduates that studied elsewhere to move to their city for work.

Many universities run schemes for their students to help them develop their employment skills. These schemes involve work-related learning opportunities and tailored career development training on issues like communication, self-awareness and entrepreneurship.

Graduate Advantage in the West Midlands aims to change the attitude of employers – SMEs in particular – who often see graduates as expensive and footloose. It helps SMEs to hire graduates on a temporary basis to demonstrate the value they can add and graduates in turn can see that small firms can make good use of their skills and offer career development opportunities. Through close links with local organisations and employers, the programme is able to stay aware of what skills and vacancies employers have, and to share feedback from firms that have taken on a new graduate with firms interested in doing so.

World of Work was established in 2009 by Liverpool John Moores University (LJMU) and their partners. The initiative has a network of 400 firms that provide regular feedback to students on the core skills they want from new graduate hires. The employers’ engagement with students also means they are aware of the skills new graduates have and can encourage them to apply for positions in their firms.

Knowledge Transfer Partnerships (KTPs) operate throughout the UK to bring local universities, businesses and graduates together to help businesses grow and provide graduates with work experience and jobs. Over 80 per cent of graduates who complete a KTP are offered a permanent job at the end of the programme. Graduates don’t have to have studied at the university or have lived in the area. Sheffield Hallam University, for example, promotes its KTPs to local businesses and graduates and the majority of the university’s KTPs are filled by graduates from the Yorkshire and Humber region.

Coventry, Cranfield, Warwick and Loughborough Universities offer an MSc in Control Systems and Vehicle Engineering which has been designed with and for Jaguar Land Rover engineers, which has its UK base in the East Midlands.

These schemes focus on reducing the costs to employers of hiring a graduate through offering a wage subsidy.

In 2011, Glasgow City Council set up the Graduate Commonwealth Fund, targeted at graduates living in the city who have been unemployed for three months. The initiative funds 50 per cent of the graduate’s wages for one year (up to £10,000) on the condition that the new job is additional, permanent, and requires graduate-level or professional skills.

The Plymouth Graduate Internship Programme (PGIP) connects Plymouth University with businesses based in the South West and is open to graduates of any UK university or FE college. Launched in 2010, PGIP offers employers financial assistance towards creating eight week minimum graduate internships paying at least £300 per week. By 2014 the scheme had supported 84 graduates to take up positions at 60 firms.

Many initiatives, often led by universities, focus on improving the links between graduates and businesses within a city region, with the university often acting as a broker between the two. These initiatives help graduates to look for jobs within the city region and increase employers’ access to skilled workers.

Gradsouthwest is an independent body that offers a brokerage role between graduates and employers to retain graduate-level skills in the South West. Employers contact the organisation when they have a graduate role to fill, and Gradsouthwest places the advertisement on their website. Careers departments in local universities also refer students and graduates to GradSouthWest. The organisation also helps graduates moving into the region.

The University of Liverpool runs the Graduate to Merseyside programme which is open to any student living in Merseyside and helps promote local job opportunities and internships to students. The focus is on SMEs in Merseyside, with the university providing a recruitment service for employers. This means vacancies are advertised through the University, and applications are sent to the University. The University then short-lists for the employer, reducing the time and resources employers need to devote to recruitment.