The data above suggests that universities play a large role in the movements of people to and from Newcastle. This section explores the specific migration patterns of students and graduates into and out of the city using two data sets from the Higher Education Statistics Authority (HESA). The first looks at admissions (for all students at university in 2014/15 including international students), and the second is based on a survey of graduates six months after graduation (for leavers in 2013/14 and 2014/15) but only includes domestic students. Unlike the ONS data used above it covers the whole of the UK.

Newcastle’s universities have a strong regional and international pull

In the academic year 2014/15, 37 per cent of Newcastle’s university students were originally from the North East region and 17 per cent were from the city itself. As Figure 8 shows, other popular UK origins of students were Yorkshire and the North West. 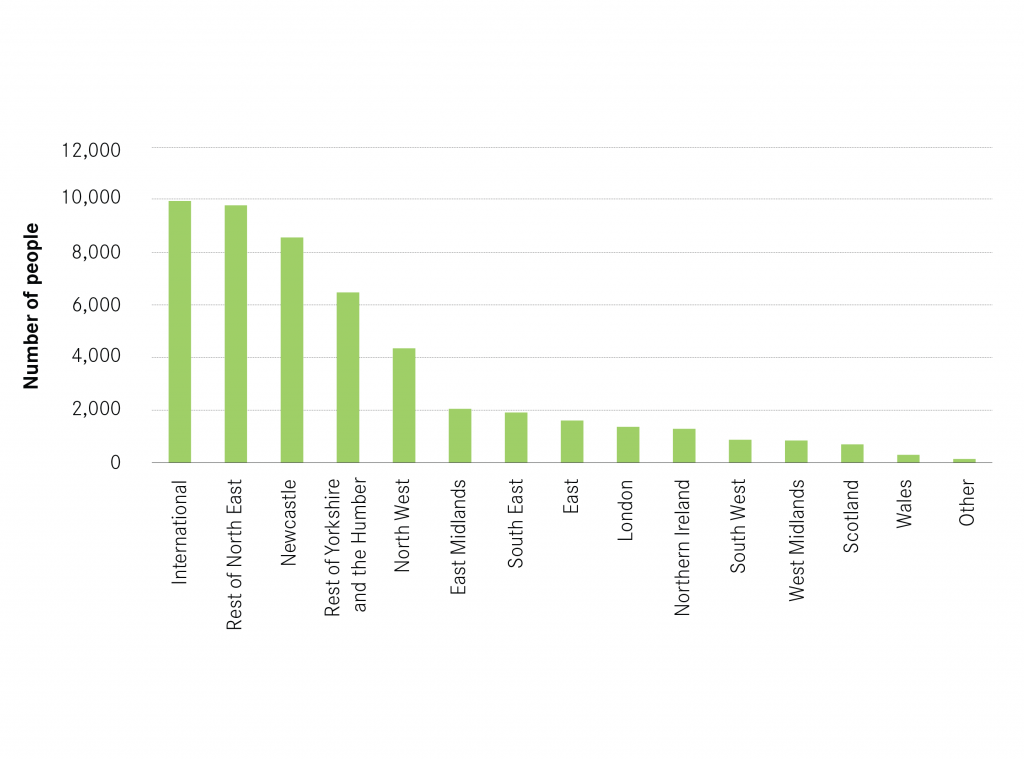 Figure 9: Origin cities of those students who moved to Newcastle for university, 2014/15 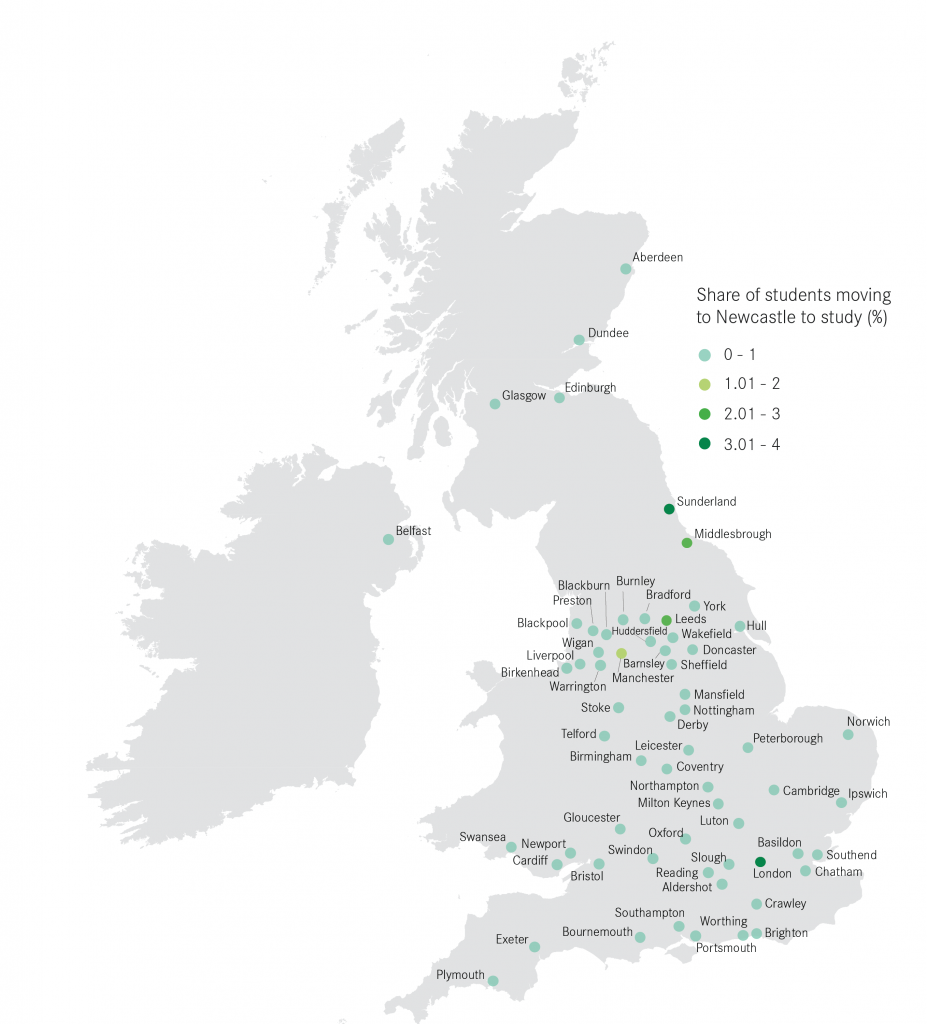 However, these patterns differed by institution. Newcastle university had a much wider pull than Northumbria university whose students were mainly local. International students made up 29 per cent of Newcastle University’s student population, as shown in Figure 10, compared with 19 per cent coming from the North East region including 12 per cent from Newcastle itself. Other popular origins of students were Yorkshire (11 per cent) and the North West (10 per cent). 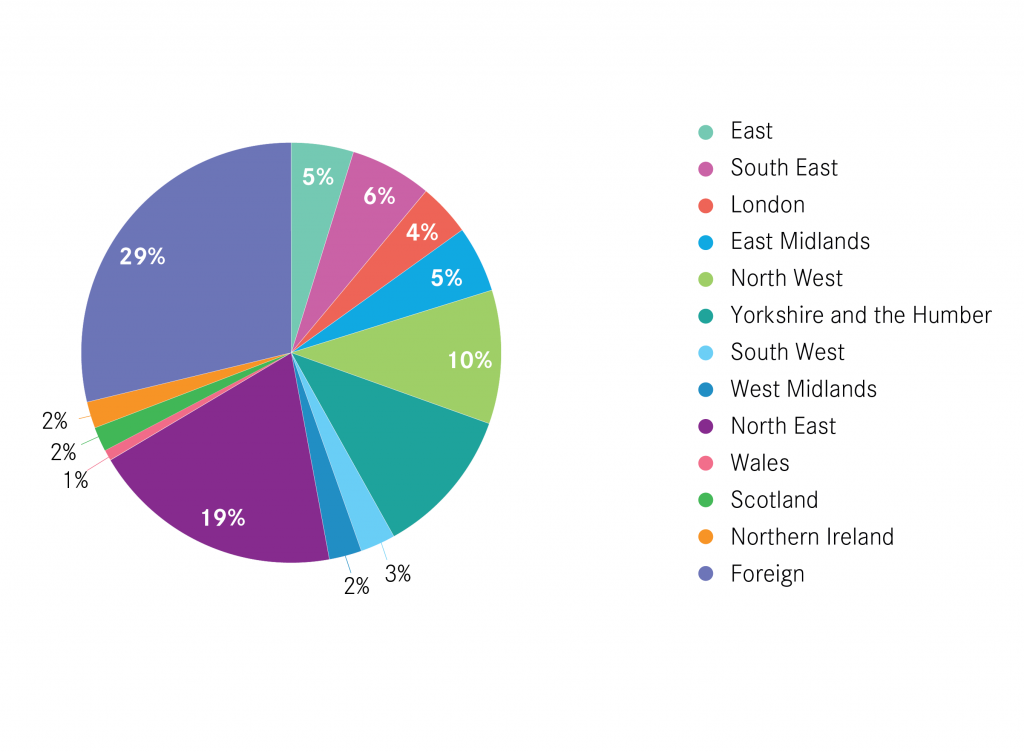 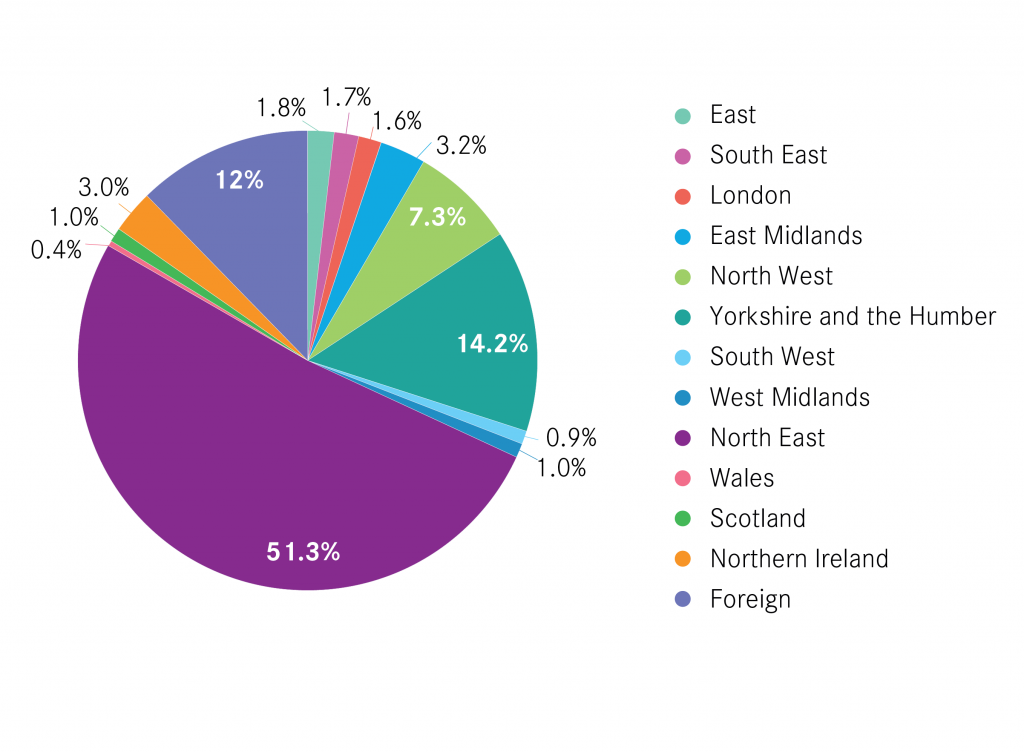 The most popular university destination of those who left the city was to stay in the North East region, as shown in Figure 12. Of those who moved out of Newcastle, 27 per cent went to Sunderland for university. Other cities attracting Newcastle students were Middlesbrough (8 per cent), Leeds (8 per cent) and London (7 per cent).

Figure 12: Destination regions of those moving away from Newcastle for university, 2014/15 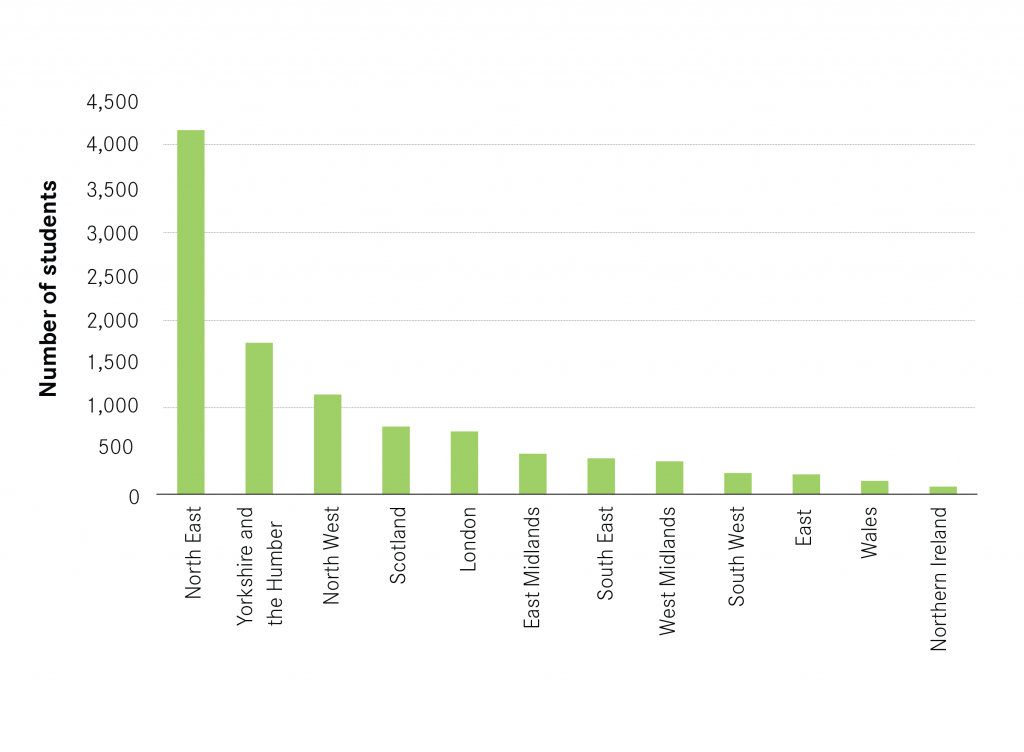 Figure 13: Destination cities of Newcastle students moving away for university, 2014/15 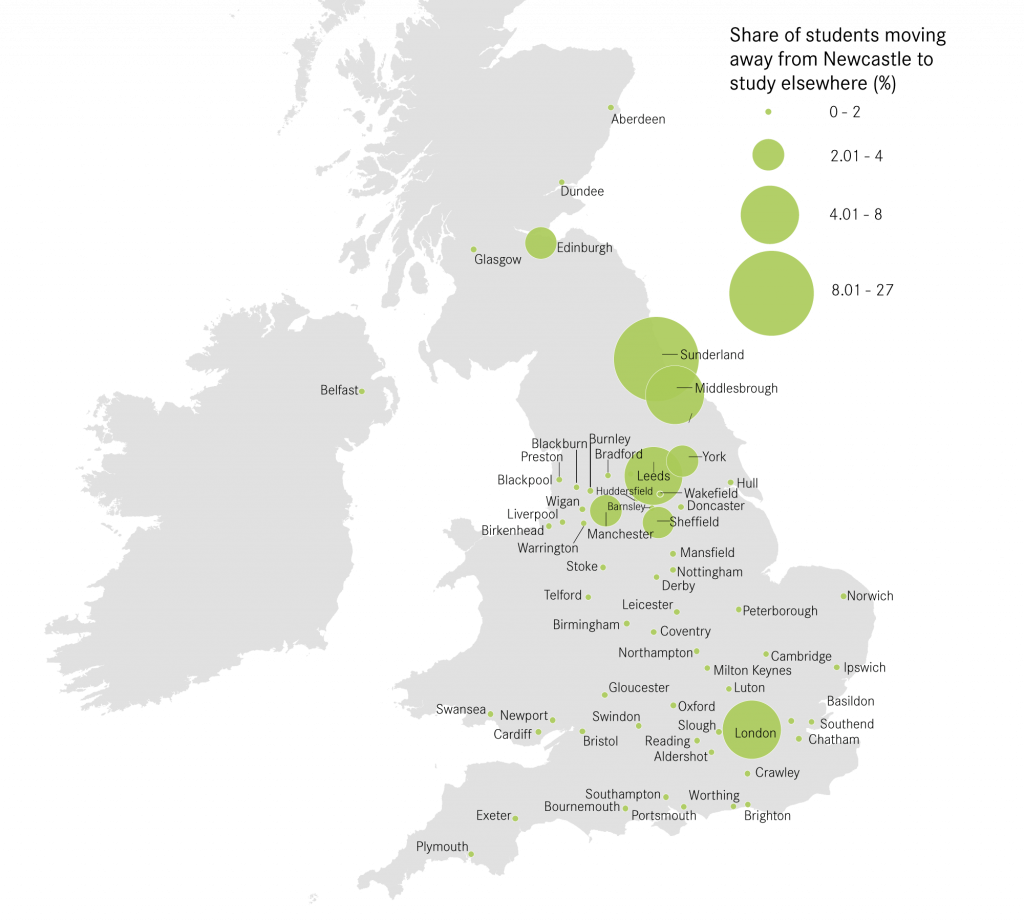 Newcastle has a high retention rate

After graduation more than a third of Newcastle’s students stay to work in the city. This was the 9th highest retention rate of all UK cities, placing it amongst other large cities as shown in Figure 14. In comparison, London and Manchester retained 77 per cent and 51 per cent, respectively, of their new graduates. At the other end of the scale, Chatham and Exeter only retained 12 per cent and 13 per cent of new graduates. 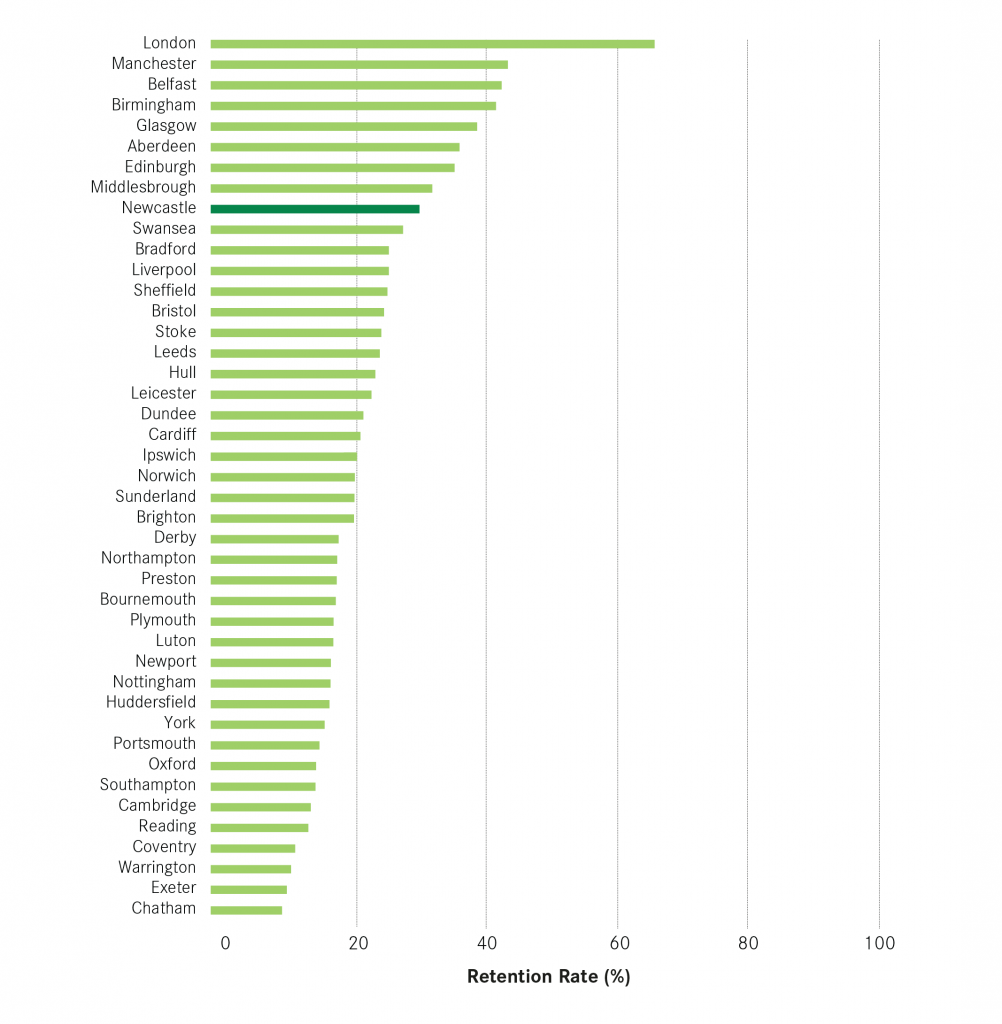 However, the city’s two universities had very different retention rates. Six months after graduation, 26 per cent of Newcastle University graduates were working in the city. In comparison, as shown in Figure 15, 40 per cent of graduates from Northumbria University had stayed.

One reason for this difference is the tendency of Northumbria students to be from the local area. As shown above, half of the university’s students were from the region and local students are more likely than others to remain in the city on graduation given their home ties. Figure 16 shows that 52 per cent of the university’s graduates who stayed in the city grew up there. In contrast, only 31 per cent of Newcastle University’s retained graduates were originally from the city.

This suggests that retention rates are likely to be driven by the regional focus of a city’s institutions. By implication, Newcastle University’s more diverse student population is likely to be part of the reason for its lower retention rate.

This relationship also exists at a city level. Figure 17 shows that cities with high retention rates tend to have a higher share of local students. However, for some cities this relationship is not as strong: Edinburgh and Aberdeen have high retention rates without a high share of local students. A distinction can therefore be made between cities which retain graduates due to a strong local focus, and those which retain graduates despite their diverse student base. Newcastle is one of the latter cities, more similar to Edinburgh than Middlesbrough; it retains a quarter of all students who were not originally from the city, one of the highest rates of all UK cities. 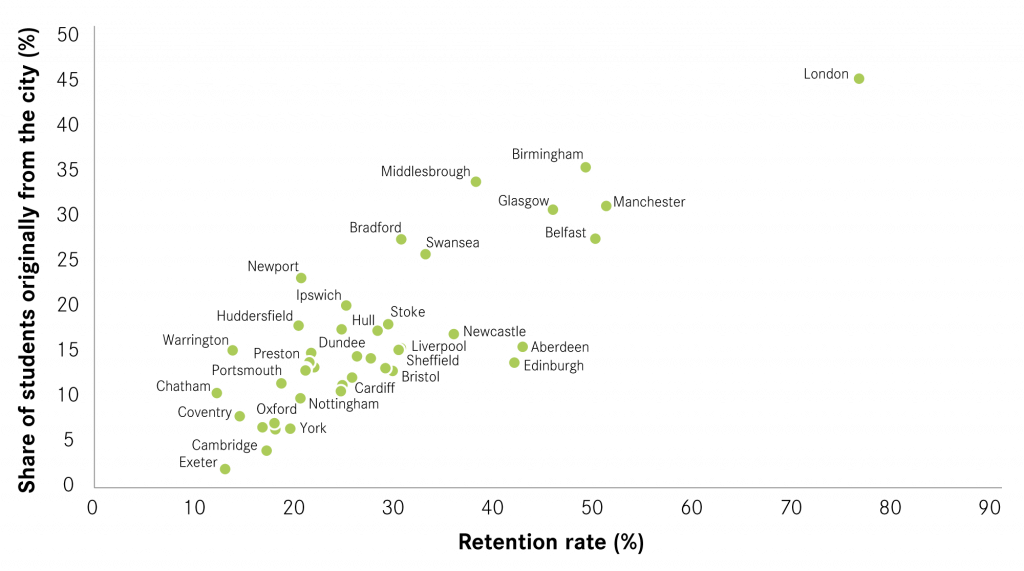 Retention rates also vary by subject, as shown in Figure 18. Of those studying subjects related to medicine, 56 per cent stayed in Newcastle for work after university. Almost half of computer science graduates (45 per cent) stayed in the city and the retention rate for those studying education was 46 per cent.

The high number of retained medical students was driven by Northumbria University. 20 per cent of its graduates studied subjects related to medicine, and 61 per cent of these graduates then chose to remain in Newcastle on graduation. For computer science and education the retention rates of students did not vary much across the two institutions. 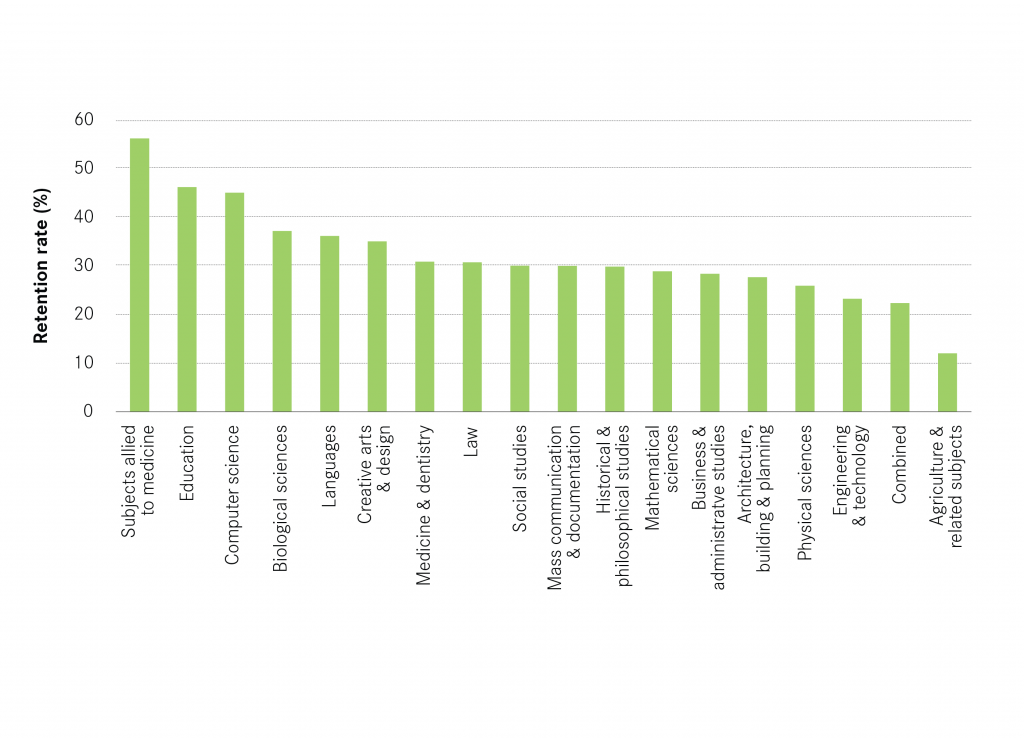 London is the most popular destination of graduates who leave Newcastle

Of the two-thirds of graduates who left Newcastle on graduation, 17 per cent chose to work in London, as shown in Figure 19. The attraction of the capital is not unique to Newcastle graduates; our research shows that the capital is a popular destination for graduates across the UK, especially those with 1st or upper second class degrees from Russell Group universities.

Nearby cities were also popular destinations. Many stayed within the North East, with 7 per cent moving to Sunderland and 5 per cent to Middlesbrough. Looking slightly further afield, 5 per cent moved to Leeds and 4 per cent to Manchester. 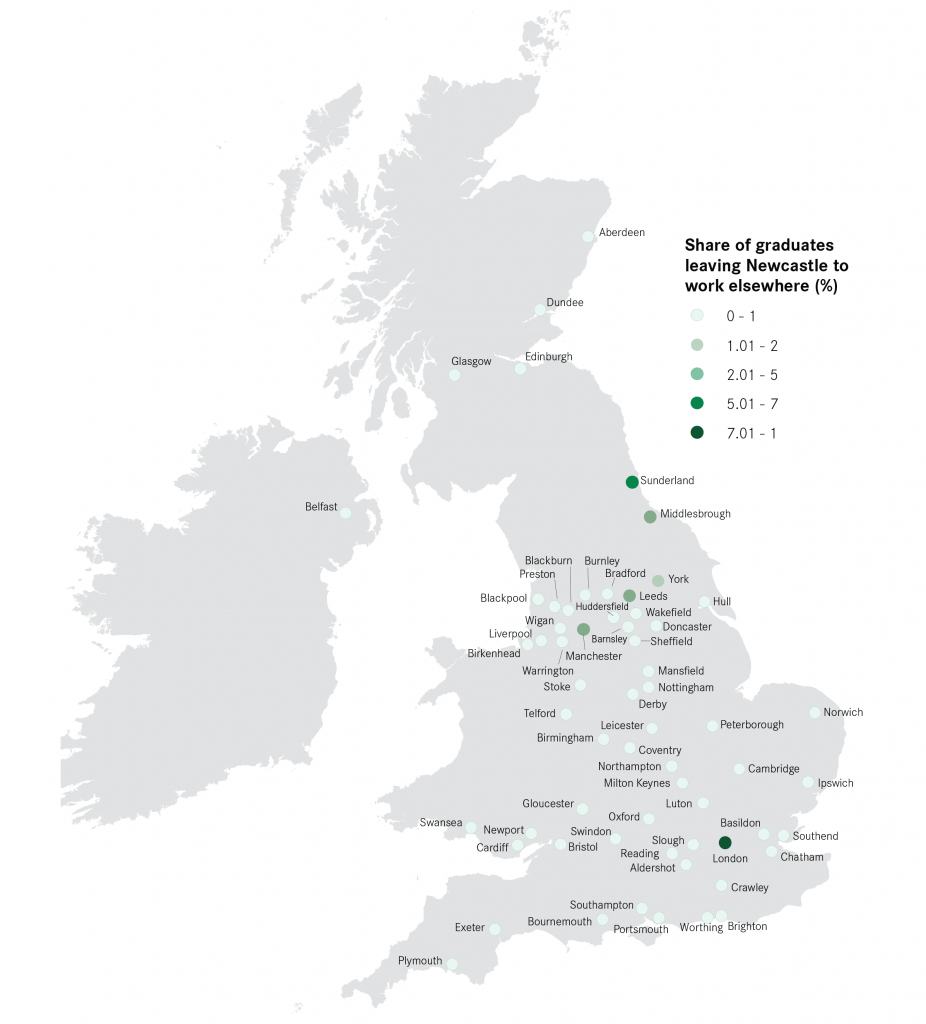 This data may not initially appear to be in-line with the earlier findings of a net outflow of young graduates from the city. This is because there is a final cohort of students, the ‘bouncers’ who are only temporarily in the city whilst at university. These students move into a city to study but leave straight after graduation. It was these bouncers who drove the outward migration patterns seen.

Of those who moved to Newcastle for university, 75 per cent left on graduation. Although this seems large, this is the 8th lowest proportion of all university cities. Figure 21 illustrates the size of this group: 7,850 surveyed graduates were ‘bouncers’ (shown by the dark green bar). This was a much larger number of graduates than those gained (shown by the light green bar), and so hides the fact that some students do stay on in the city to work.