Skills are a crucial component of any city economy. This is likely to become ever more the case as the UK continues to specialise in higher-skilled activities. Those cities that can offer businesses the high-skilled workers they need are likely to be the most successful.

Newcastle’s two universities make an important contribution to the gradual change in the skill’s make-up of the city. Six months after graduation in 2013/14 and 2014/15, Newcastle gained approximately 1,500 graduates overall each year. In other words, for those cohorts more graduates were working in the city who grew up elsewhere than were working elsewhere but were originally from Newcastle.

This is to a large extent due to the city’s ability to retain graduates who moved to Newcastle to study at its universities. The city attracts in many thousands of students from elsewhere to study, and around 25 per cent of them stayed on to work in the city, the 9th highest share of all university cities.

But while it has been successful at graduate retention, the city has been less successful at attracting in graduates who studied elsewhere. On this measure Newcastle had the 7th lowest share of all university cities. Our research shows that graduates are attracted to cities for their job opportunities. So to attract more graduates to work in the city Newcastle should focus on wider economic factors, such as transport, planning, and improving the skills of those with few or no formal qualifications, which will improve the job opportunities available to graduates. 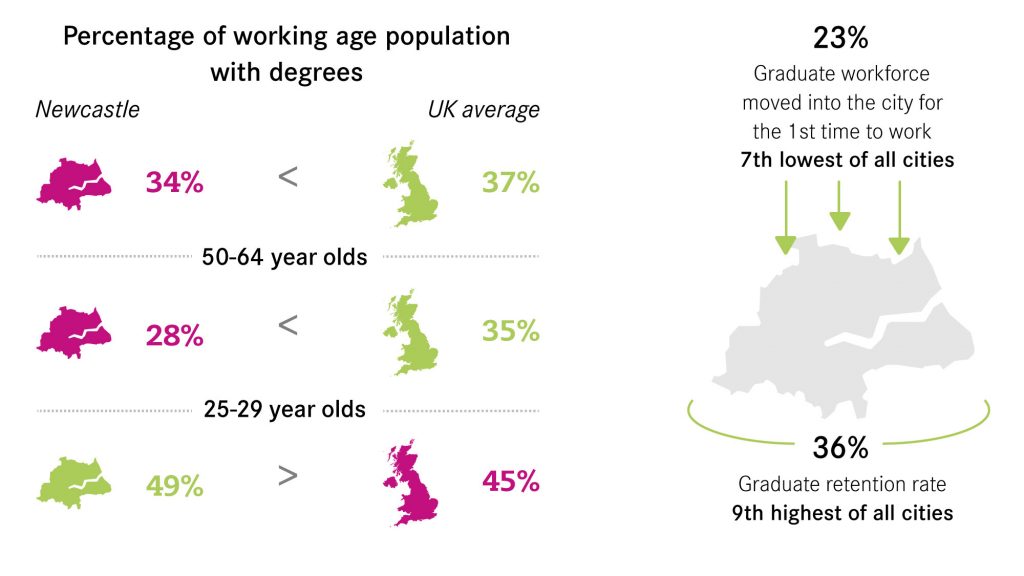