The data above suggests that universities play a large role in the movements of people to and from Leeds. This section explores the migration patterns of students and graduates into and out of the city using two data sets from the Higher Education Statistics Authority (HESA). The first looks at admissions (for all students at university in 2014/15), and the second is based on a survey of graduates six months after graduation (for leavers in 2013/14 and 2014/15). Unlike the ONS data used above, it covers the whole of the UK and includes students who came from abroad.

Leeds welcomes more students to its universities, on a net basis, than any other UK city

A significant pull of the city’s universities was regional: 34 per cent of all students at university in Leeds in 2014/15 were from the Yorkshire, with 13 per cent from Leeds itself and 21 per cent from elsewhere in the region. The next most popular origin was the North West, as Figure 8 shows, with 15 per cent of students coming from this region. 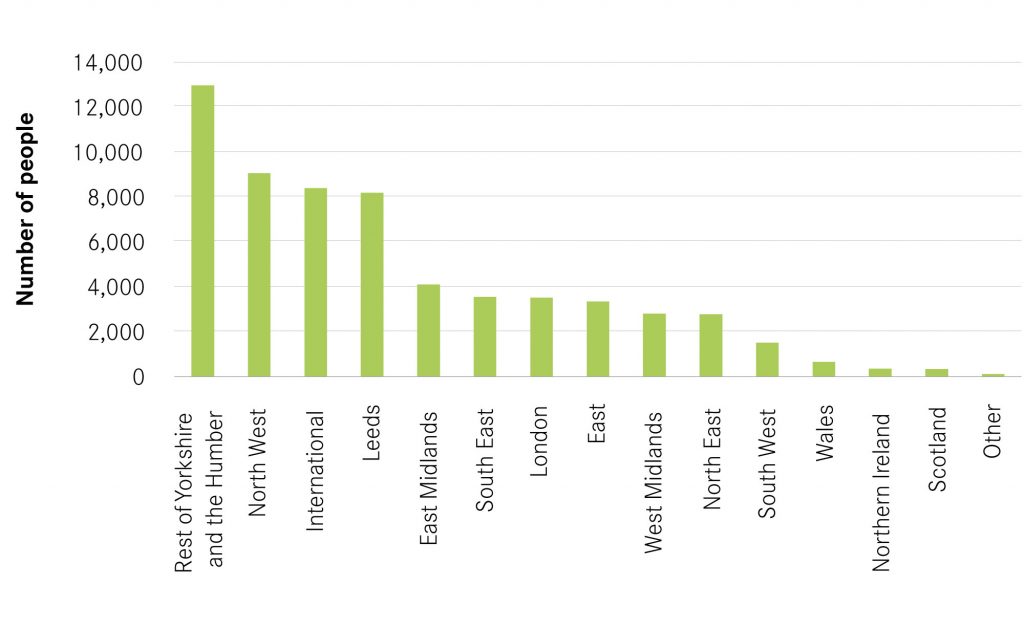 Figure 9: Origin cities of those students who moved to Leeds for university, 2014/15 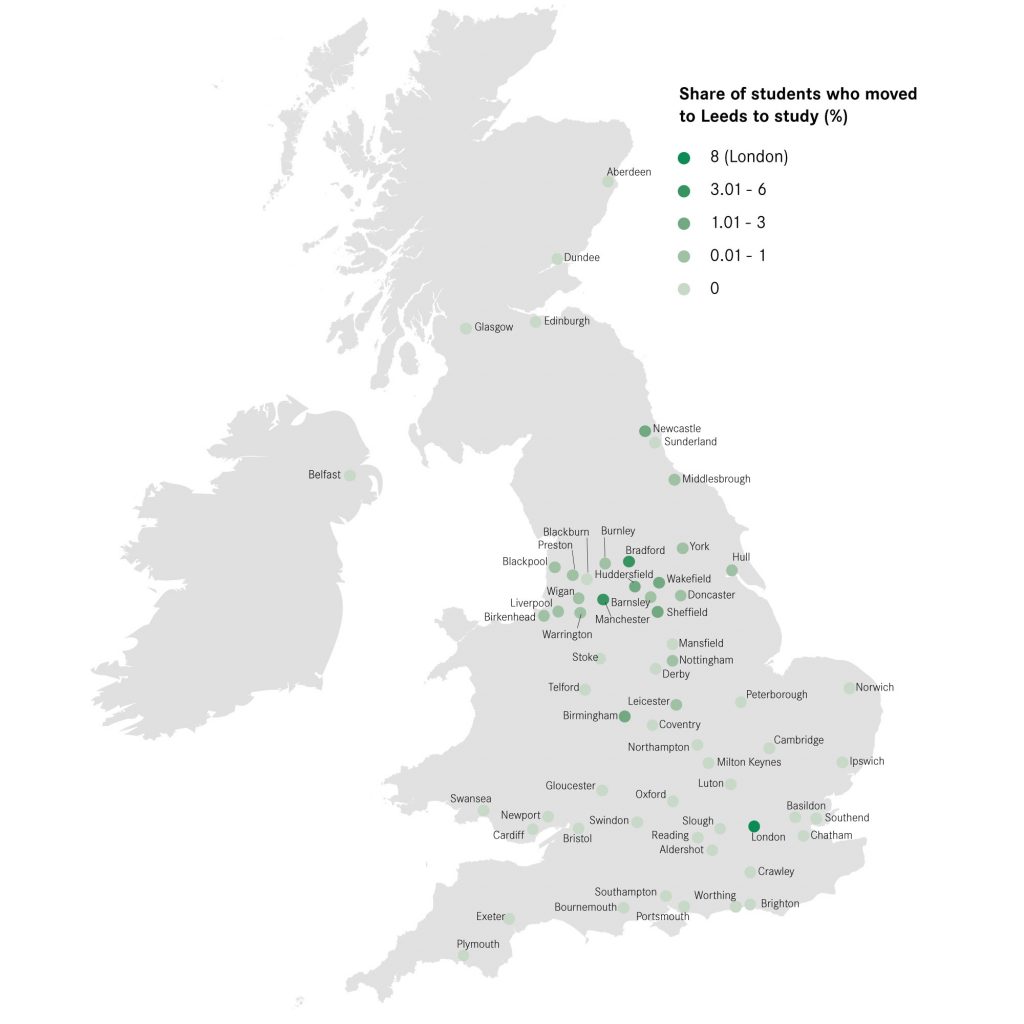 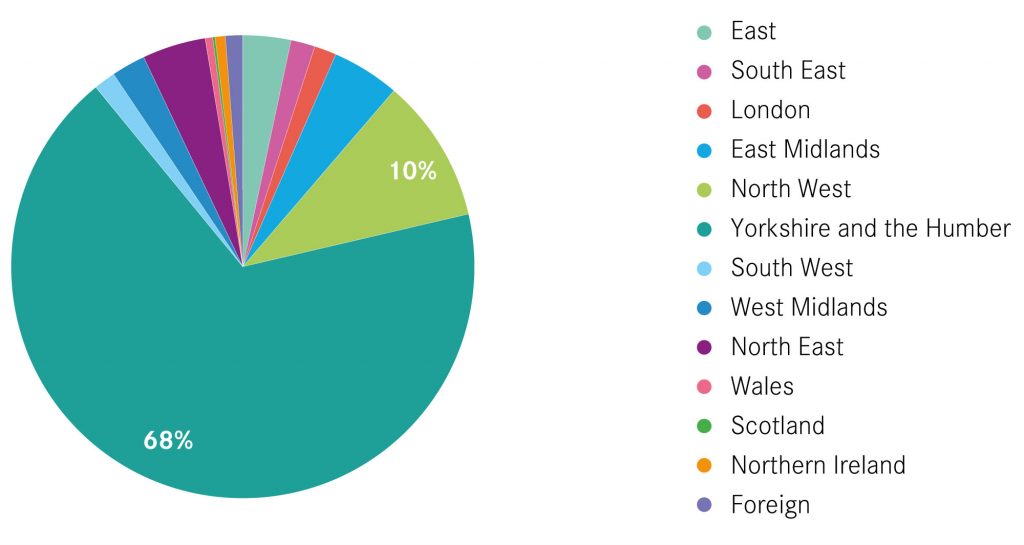 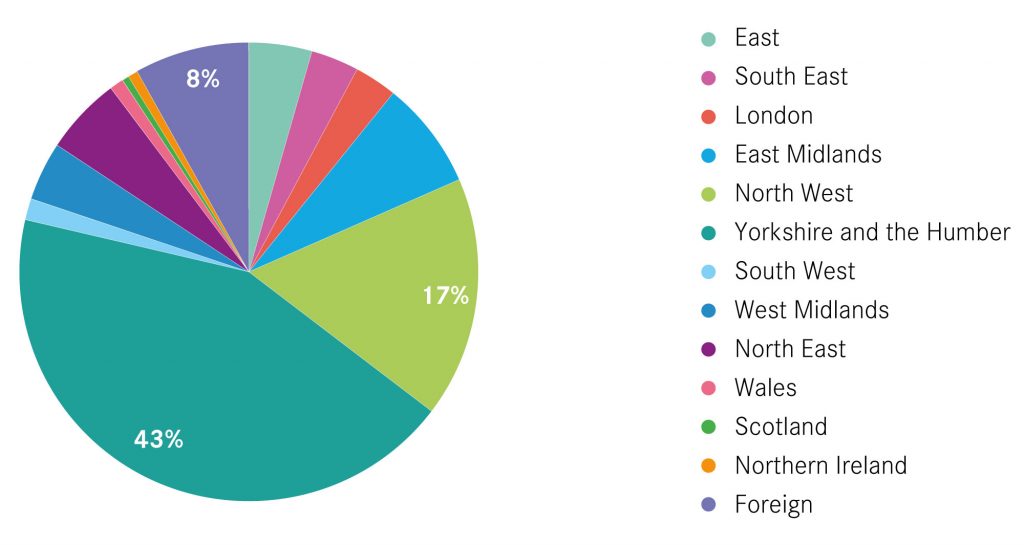 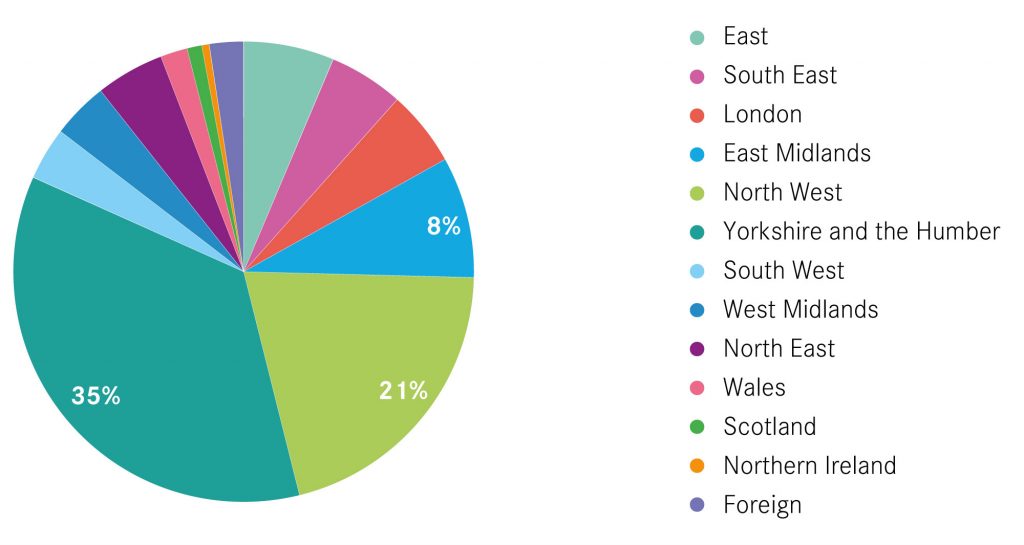 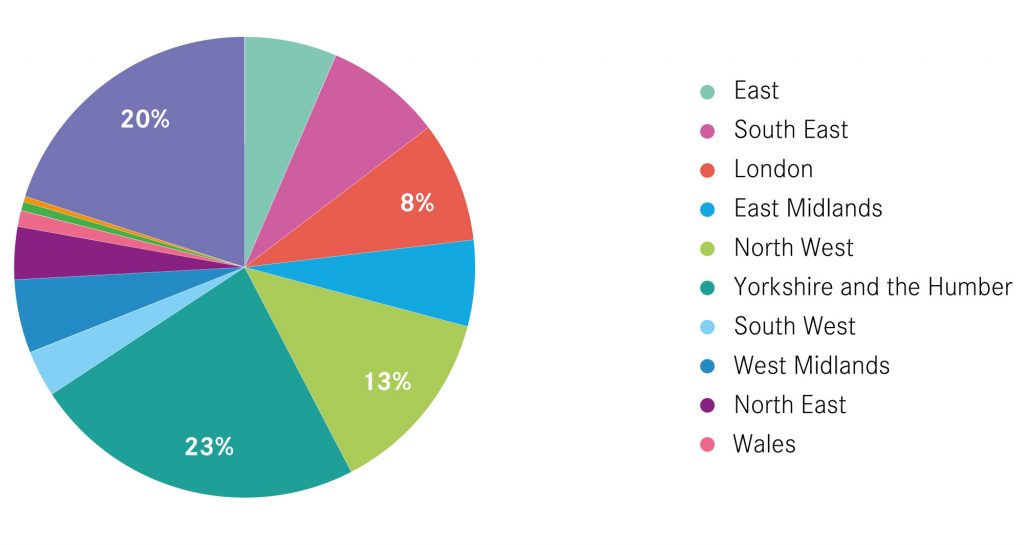 Figure 14: Origin of students at the Northern School of Contemporary Dance, 2014/15 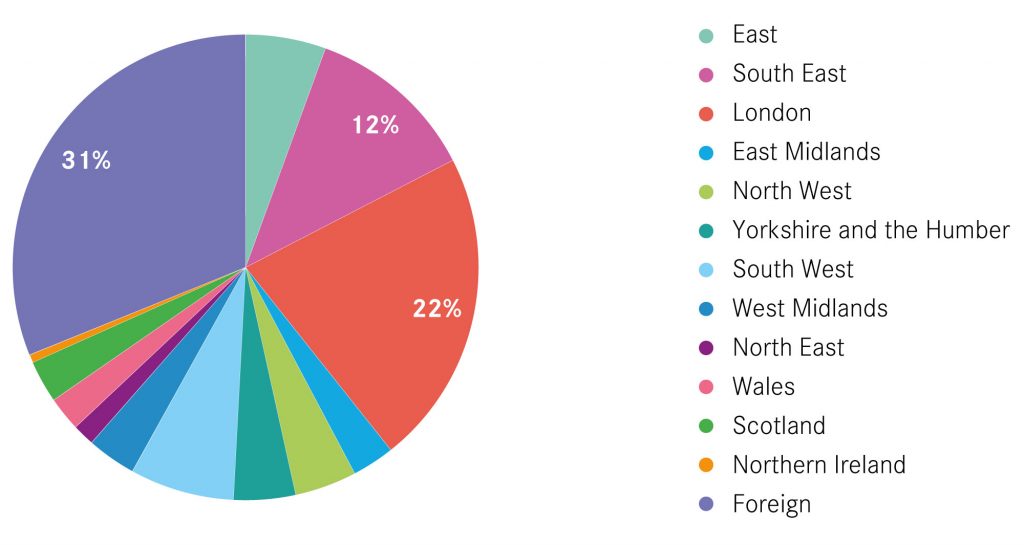 Of all young people in Leeds who decided to go to a UK university, 40 per cent stayed and studied in the city. This was only the 21st highest proportion of all UK cities and a lower proportion than most large cities. Of those who moved away many did not move far, choosing instead to study elsewhere in Yorkshire. For example, 12 per cent studied in Huddersfield and 9 per cent moved to Bradford. Outside of Yorkshire, Newcastle was the most popular destination, with 9 per cent of students moving there.

Figure 15: Destination regions of those moving away from Leeds for university, 2014/15 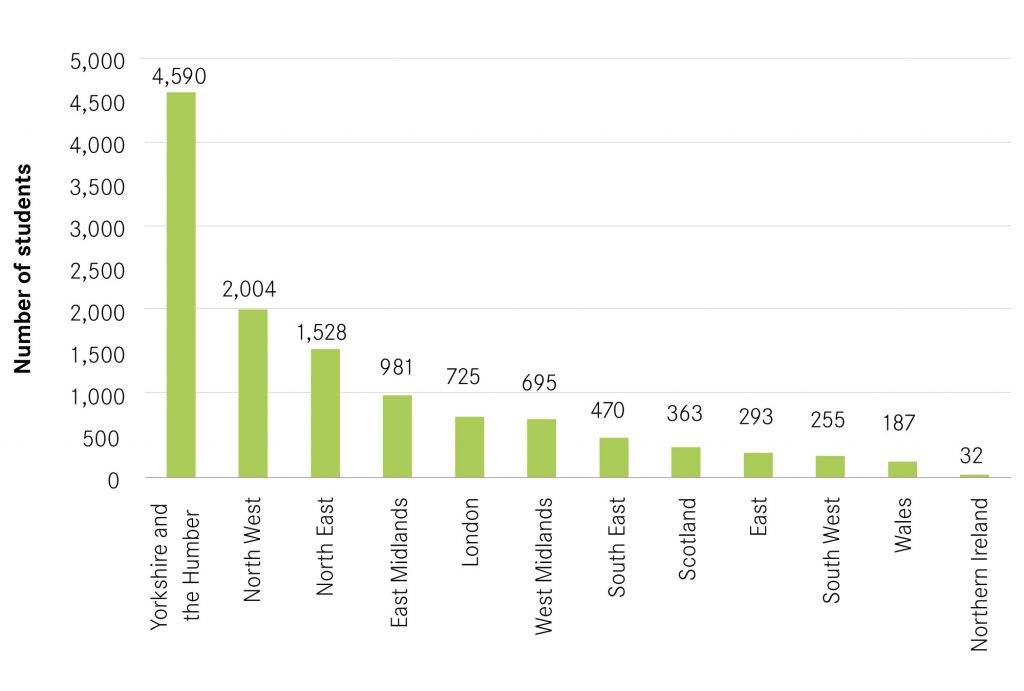 Figure 16: Destination cities of Leeds students moving away for university, 2014/15 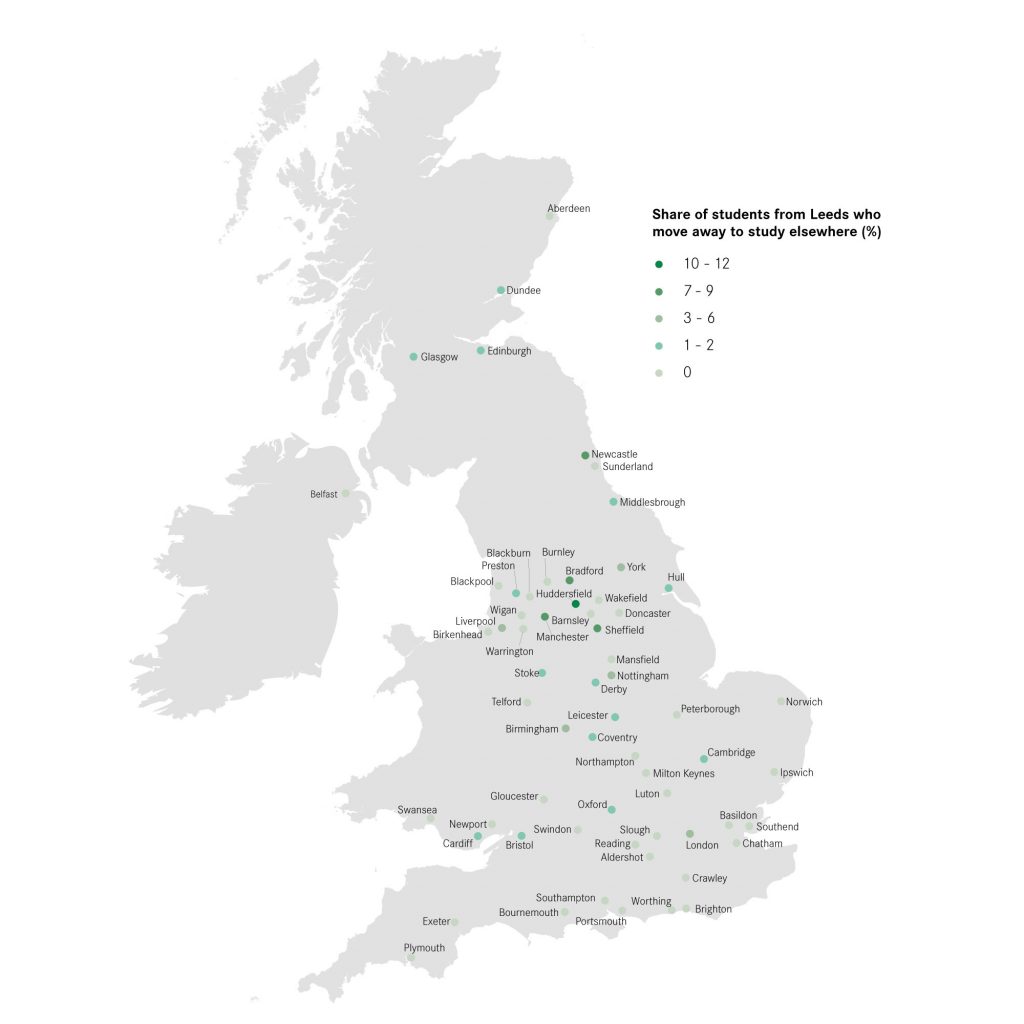 Movements of new graduates after university

Leeds retains almost 30 per cent of its students on graduation

As a city, Leeds retained 29 per cent of its graduates in 2014 and 2015; the 16th highest rate of UK cities as shown in Figure 17. The cities with the highest retention rates were London and Manchester: 77 per cent and 51 per cent of their graduates respectively were working in their university city six months later. 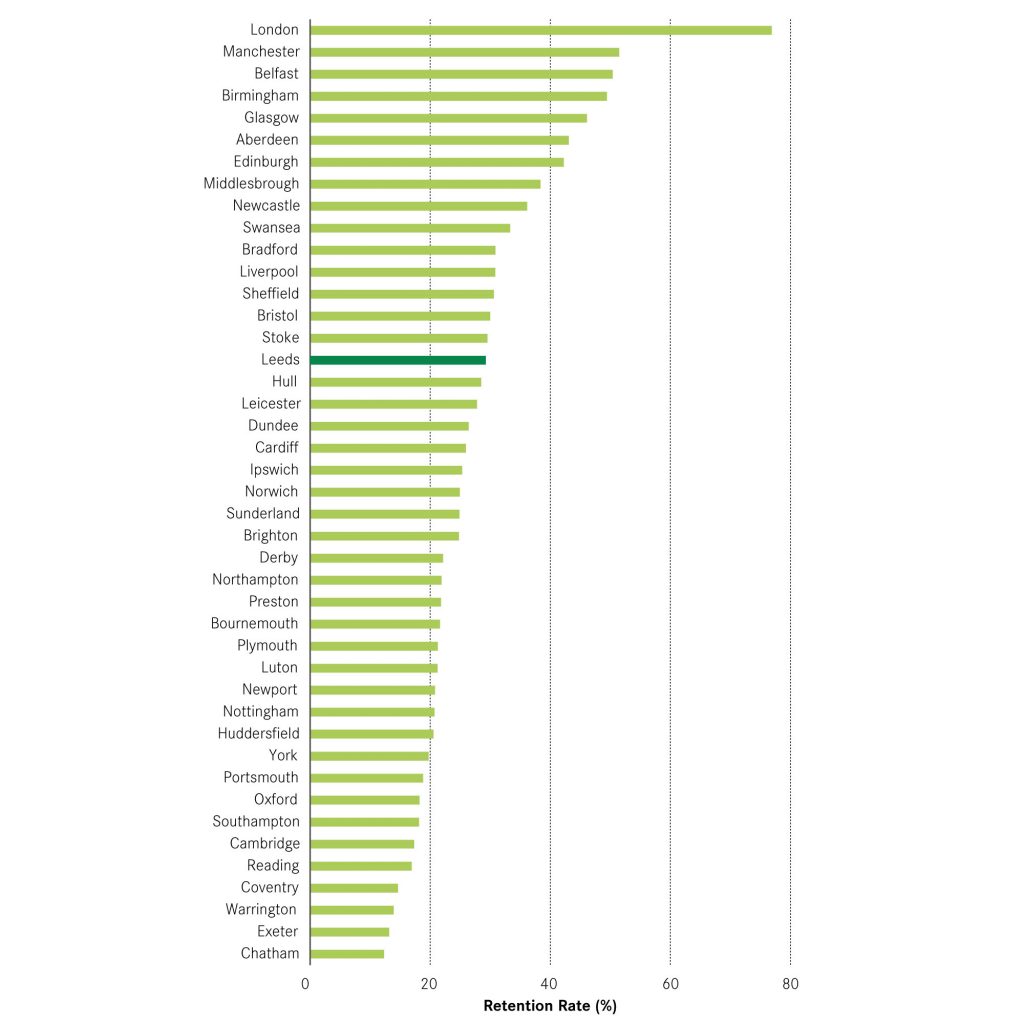 However, as Figure 18 shows, the rate of retention varied across the city’s universities. The proportion of graduates who stayed to work in Leeds after graduation was highest for Leeds Trinity and Leeds College of Art, followed closely by the NSCD. The University of Leeds had the lowest retention rate.

The students who stayed in Leeds can be split into two groups: those who grew up, studied and worked in Leeds, and those who came into the city to study and stayed for work. Looking again at retention rates with these two groups in mind shows that the rates are driven by the regional pull of an institution, which was shown in Figures 10-14 above.

For example, of the Leeds Trinity students who stayed in the city after graduation, half of them were originally from Leeds. In contrast, the University of Leeds’ much greater national and international focus means that its retention rate is lower. Of those retained, just 27 per cent were originally from Leeds, reflecting the lower share of its students that grew up in the city.

This suggests retention rates are strongly linked to how many students the university attracts from the city itself, and the surrounding region.

Interestingly this pattern does not apply to the specialist universities (Leeds College of Art and NSCD). Both of these had high retention rates (34 per cent and 27 per cent) but a small proportion of those who stayed were home-grown. 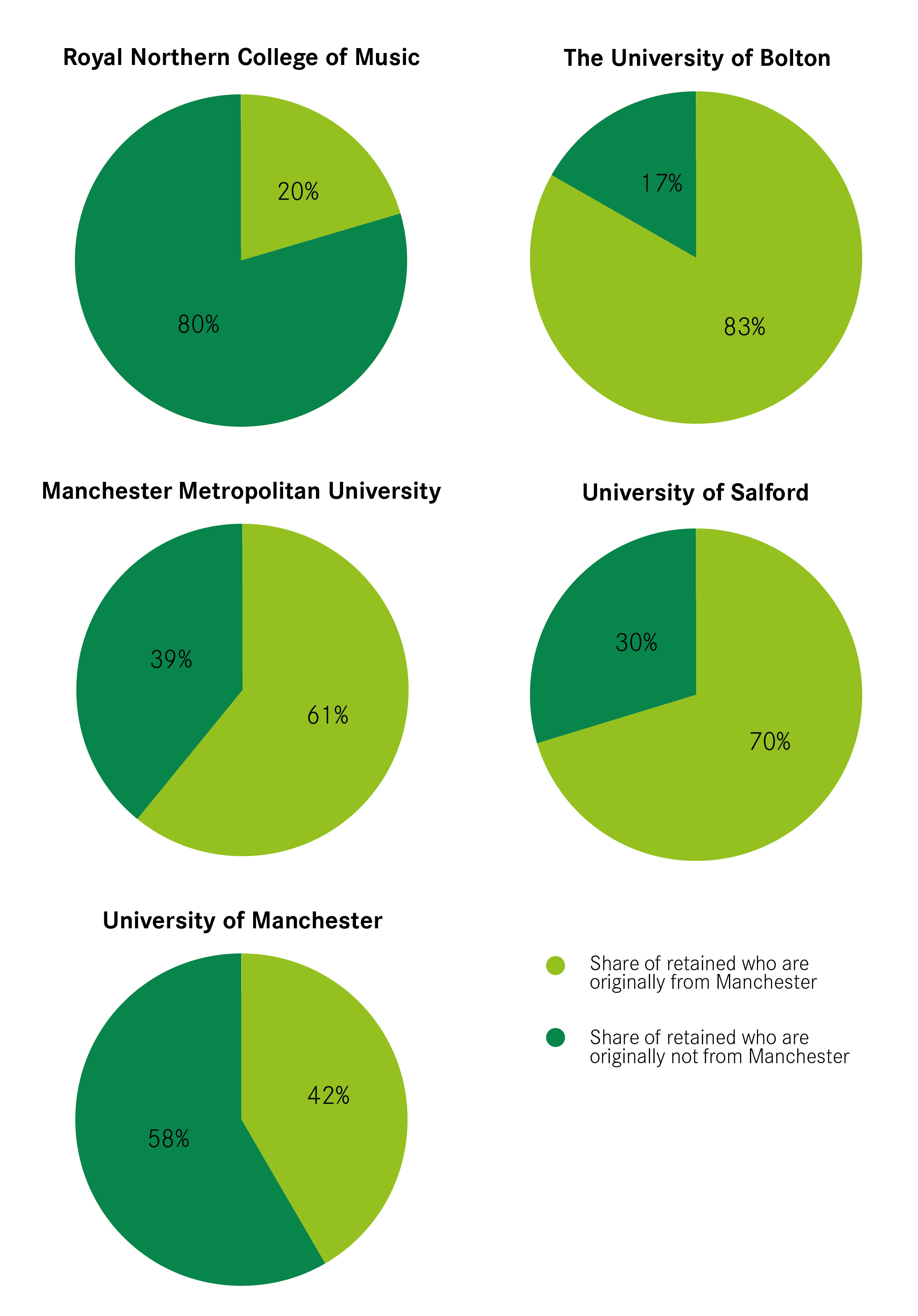 Of those graduates who leave Leeds for work, 21 per cent move to London

A number of students who left Leeds remained very close to the city. Of those who moved away for work, 7 per cent went to Bradford, 4 per cent to Wakefield, 4 per cent to Huddersfield and 2 per cent to York. Therefore, though they were not retained by the city of Leeds itself they chose to work within the wider city region. 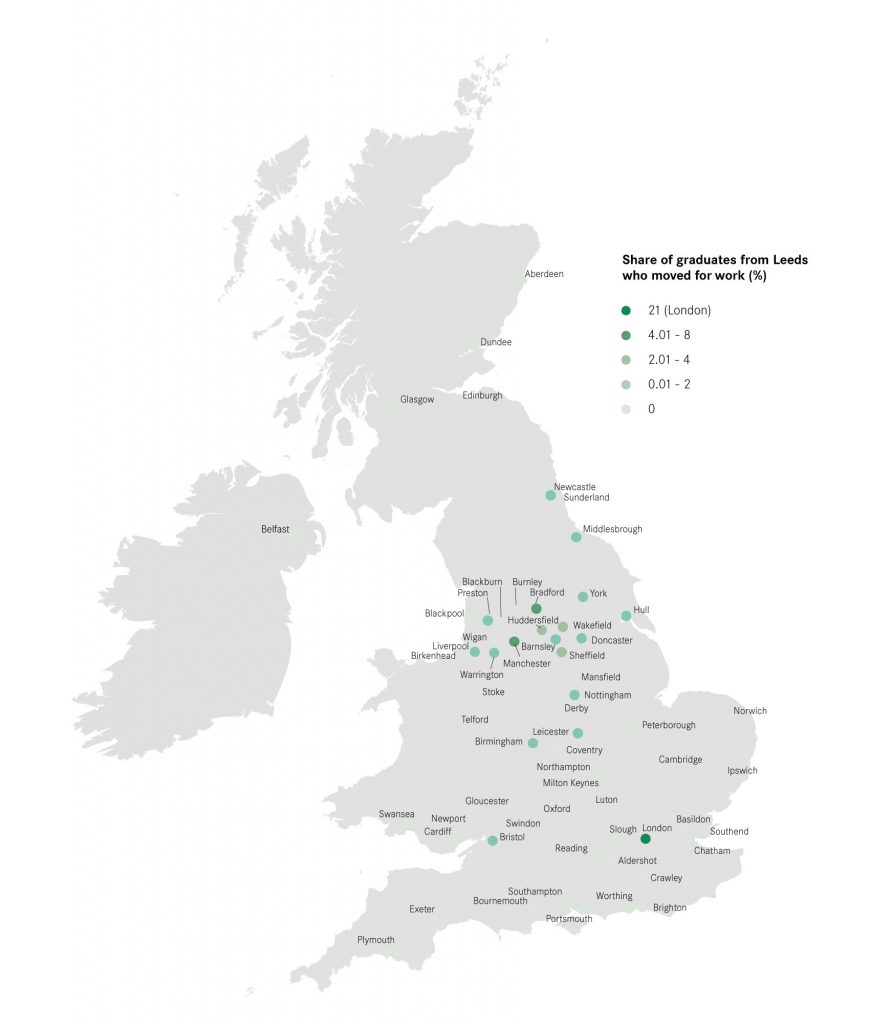 Another component of graduate migration comprises of those attracted into Leeds after graduation for work. While graduate retention figures tend to get a lot of attention, the ability of a city to attract in new graduates from elsewhere is also important for ensuring its workforce is highly skilled.

Leeds attracts in a significant number of graduates for work: 60 per cent of those working in Leeds post-graduates did not study in the city. This cohort can be split into two groups: those who grew up in Leeds, moved away, and then returned for work, and those who moved into the city for the first time after graduation.

Looking first at the returners, 44 per cent of those who left Leeds for university returned for work. Although the majority did not return, this proportion is higher than the average for UK cities. In Leeds these returners make up almost a fifth of the graduate workforce.

Turning to those who moved in for work, Leeds attracted a significant number of graduates to move into the city for the first time for work; 42 per cent of the workforce did not grow up or study in Leeds. This is the highest proportion of all large UK cities and shows Leeds is an attractive location for graduates.

Combining the data on student and new graduate moves shows that overall Leeds experienced a ‘graduate gain’. Between 2013 and 2015, 2,600 of the graduates that responded to the survey had left Leeds to go to university elsewhere, whilst 6,300 of the respondents, who did not grow up in Leeds, were employed in the city after graduation. This overall gain of 3,700 graduates places Leeds as the 3rd highest gainer of graduates compared with other UK cities; London gained 42,100 of the graduates who responded and Manchester gained 4,700.

This may not appear to be in-line with the above finding that there is an outflow of young graduates from the city. This is because there is one additional cohort of students: the ‘bouncers’. These students move into Leeds to study, and leave straight after graduation. Of all students who moved to Leeds for university, 77 per cent bounced. As Figure 22 shows, the size of the graduate gain is much smaller than the number of bouncers, hence the outflow of graduates described earlier. This shows that the main role of Leeds’ institutions, for those students not from the city, is to educate them for work elsewhere.

This cohort causes a lot of noise in the data. By excluding them and comparing the number of (would be) graduates in Leeds before university with the number of graduates in the city after graduation, the graduate gain figure can be calculated.