This final section looks at the characteristics of the new graduates’ labour market in Derby.

Half of new graduate workers in Derby came from elsewhere

Figure 19 brings together all graduates who decided to work in Derby on graduation to provide an overview of the nature of the graduate workforce in the city. 16 per cent of all workers were home-grown: growing up, studying and subsequently working in Derby. Almost a quarter of workers had come to study in Derby and stayed for work. Almost half of new graduate workers had been attracted in from elsewhere, the 24th highest among UK cities.

Figure 20: Share of working new graduates by class of degree 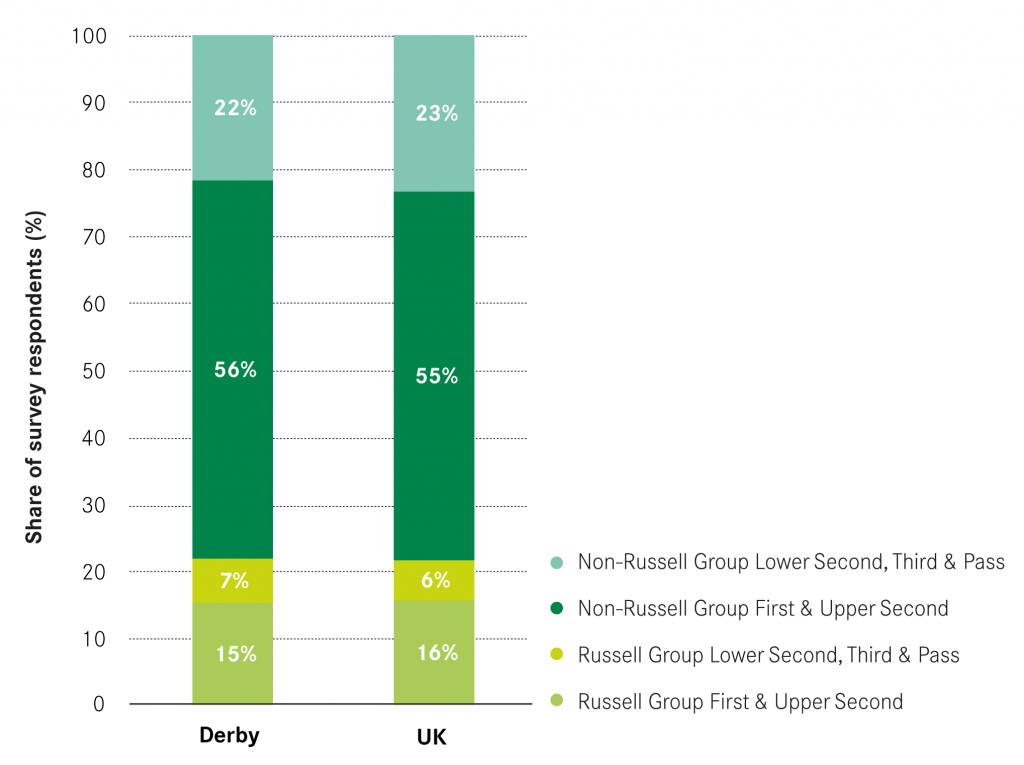 Graduates working in Derby earned on average £24,100 a year, which is above the mean UK graduate wage of £ 23,100. Derby has the 7th highest graduate wages among UK cities and only graduates in Aberdeen, London, Slough, Newport, Worthing and Basildon have higher wages than of those in Derby, as shown in Figure 21. However, analysis of UK graduates finds that graduates’ wages were not the main reasons why graduates choose their employment location. Other factors such as the type of jobs available in that city and the opportunities for career progression were more important.4 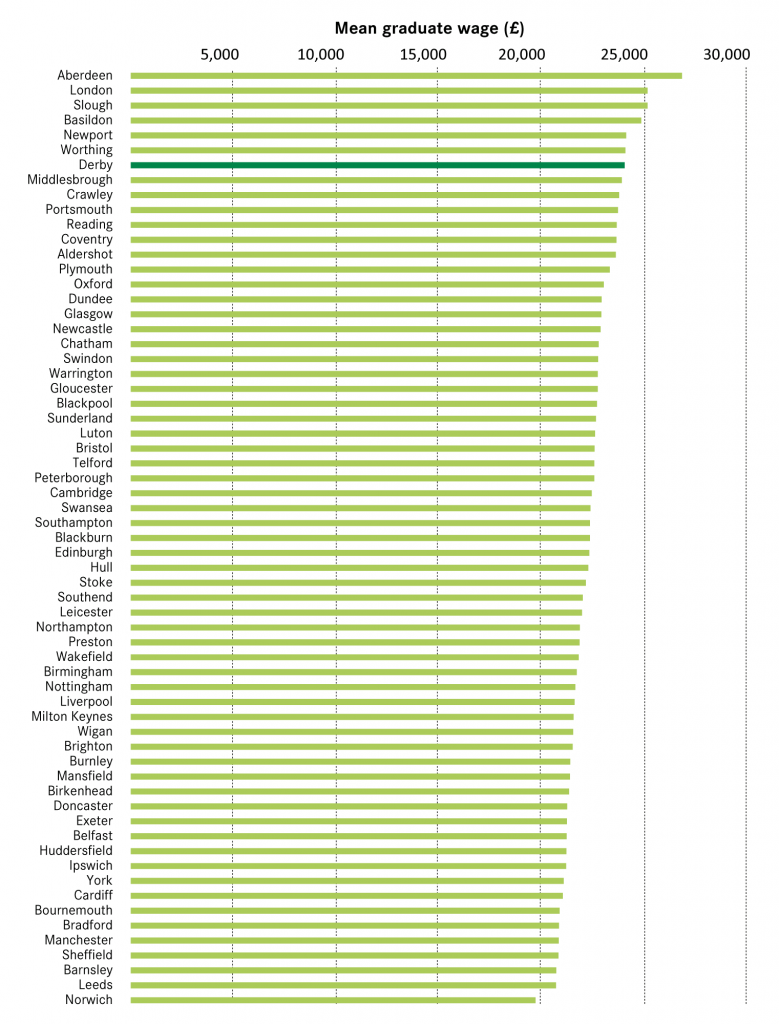 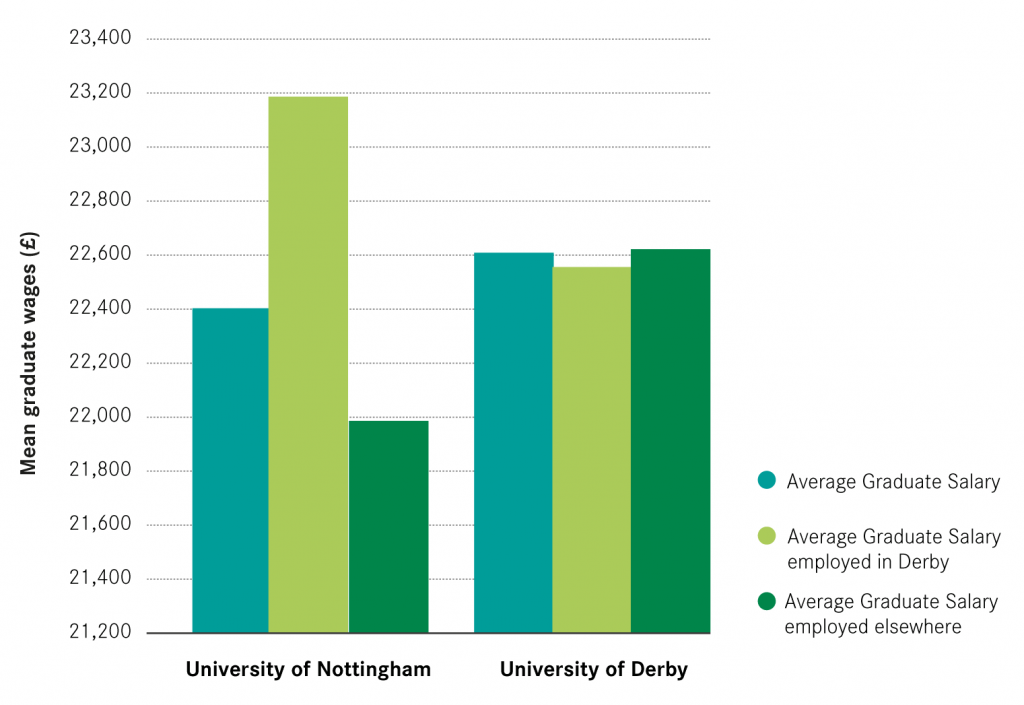 If we look at wages by sector, as shown in Figure 23, manufacturing was the sector with the highest average graduate wages. These are higher than the national average graduate wage for this industry, and the 4th highest among UK cities. Graduate wages in construction were slightly higher than the national average. However, average wages for those who worked in KIBS and other private services were lower than the average for the rest of the country. 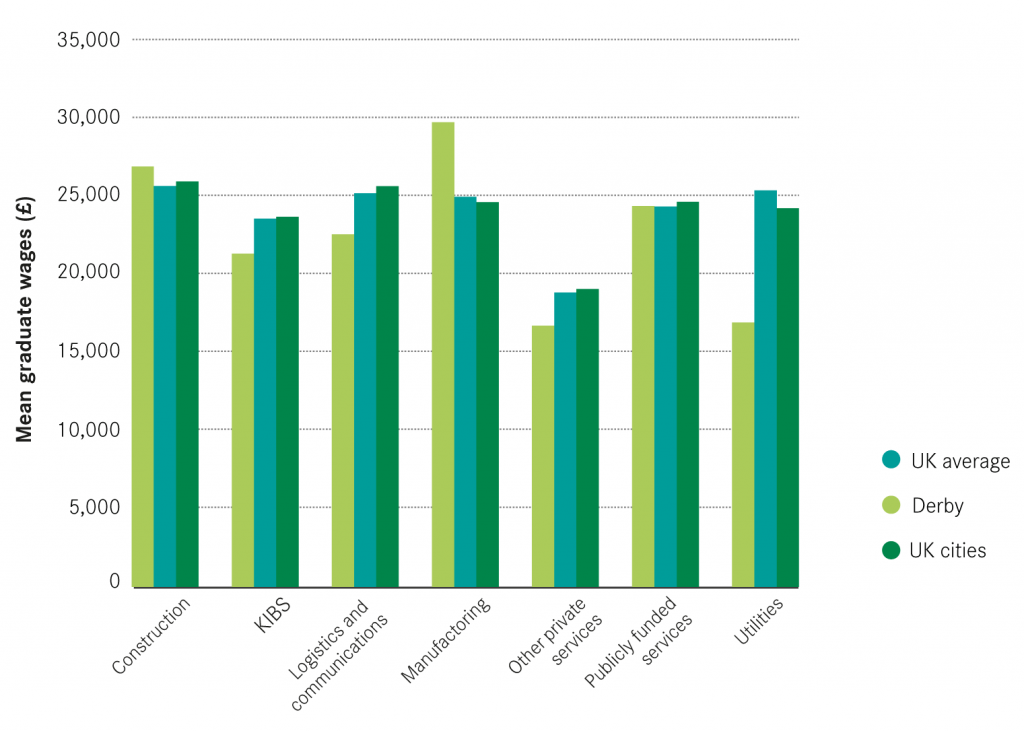 The majority of graduates in Derby are in high-skilled jobs.

But different industries play different roles in attracting graduates into the city.

Where the new graduates working in Derby came from varied across industries. Those graduating from a Derby campus were likely to go on to work in education or health (combined figure for the two universities). Manufacturing, on the other hand, played a prominent role in attracting new graduates from elsewhere: 90 per cent of graduates working in the manufacture of transport equipment did not study in Derby, with 19 per cent coming from Sheffield. Similarly, only 13 per cent of new graduates employed in architectural and engineering activities were from a Derby university. This broader pull of the city’s manufacturing sector should be viewed as a positive as attracting graduates from elsewhere is an important contributor to the overall size of a city’s new graduate workforce.

Figure 26: Share of new graduates with First and Upper Second class degree from a Russell group university, working in each sector, 2013/14 – 2014/15