This section explores the migration patterns of students and graduates into and out of the city using two data sets from the Higher Education Statistics Authority (HESA). The first looks at admissions (for all students at university in 2014/15). As Crawley does not have a university campus, the focus will be on where Crawley’s students moved to for university. The second is based on a survey of graduates six months after graduation (for leavers in 2013/14 and 2014/15). Unlike the ONS data used above, this covers the whole of the UK.

Figure 8: Destination of those moving away from Crawley for university, by region, 2014/15

Figure 9: UK cities which Crawley’s students move to for university, 2014/15 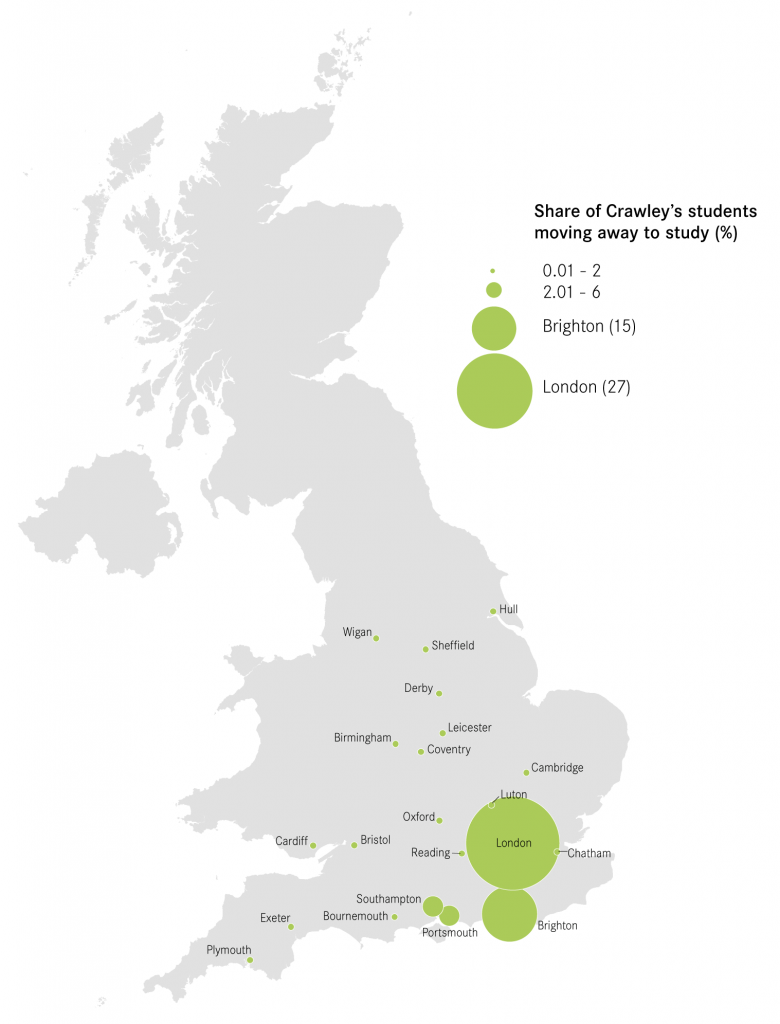 When we look at the number of students who left Crawley for university, only a third came back to the city after graduation. This is the 4th lowest return rate among UK cities; London had the highest one – 74 per cent.

Figure 10 compares the return rate in Crawley with the other 13 UK cities without a university campus: only Slough, Basildon and Aldershot have a lower rate than Crawley. Interestingly, all these cities are located in the Greater South East and in all more than a quarter of the students who do not return ended up working in London. This is not surprising given the capital’s attractiveness as a place to work. 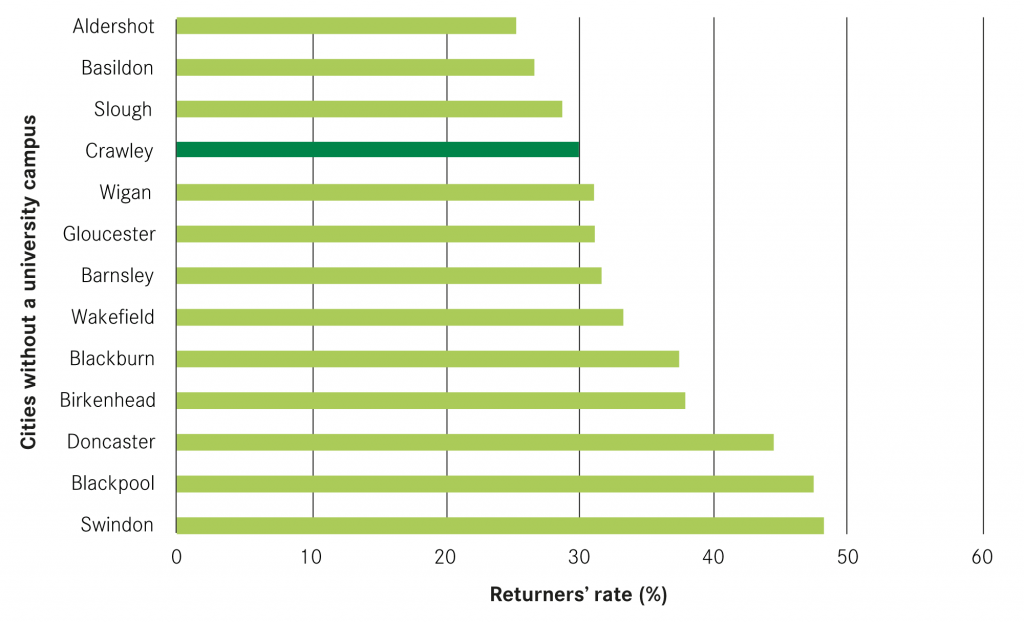 Figure 11 shows the employment destinations of those students who did not return after graduation. The majority of these new graduates did not end up working very far from Crawley: 32 per cent worked in London and 54 per cent in the rest of the South East.

Looking on a city basis shows that London attracted over a third of these new graduates. Brighton was the second most popular destination, attracting 5 per cent (Figure 12). 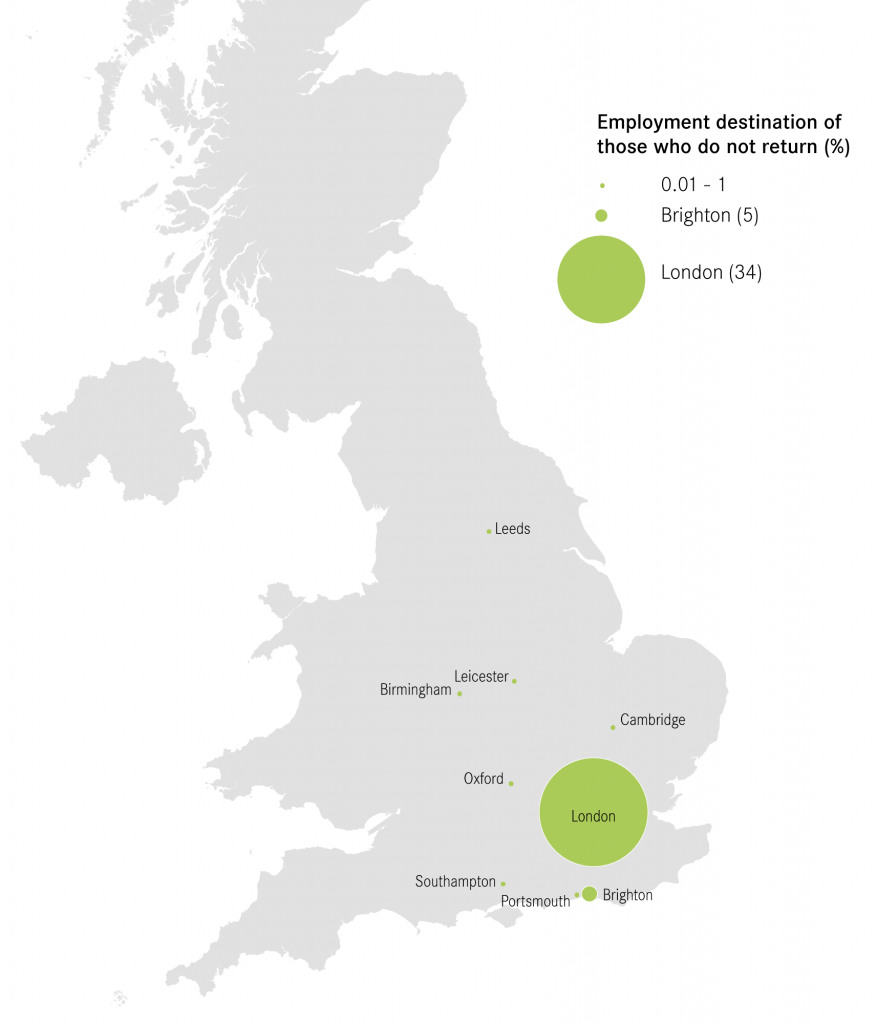 Another component of graduate migration comprises of those attracted into Crawley for the first time after graduation to work. While graduate retention figures tend to get a lot of attention, the ability of a city to attract in new graduates from elsewhere is an important part of increasing the number of degree holders in a city. For cities without a university campus, attracting new graduates is even more important. New graduates who moved to Crawley for work represented 80 per cent of the new graduate workforce, the highest share among the UK cities without a university campus, showing the success of the city of doing this.

Figure 14 shows that a fifth of these new graduates who moved to Crawley for work came from Brighton. London was the second largest contributor to Crawley’s new graduates’ labour market – 15 per cent of this cohort came from the capital. 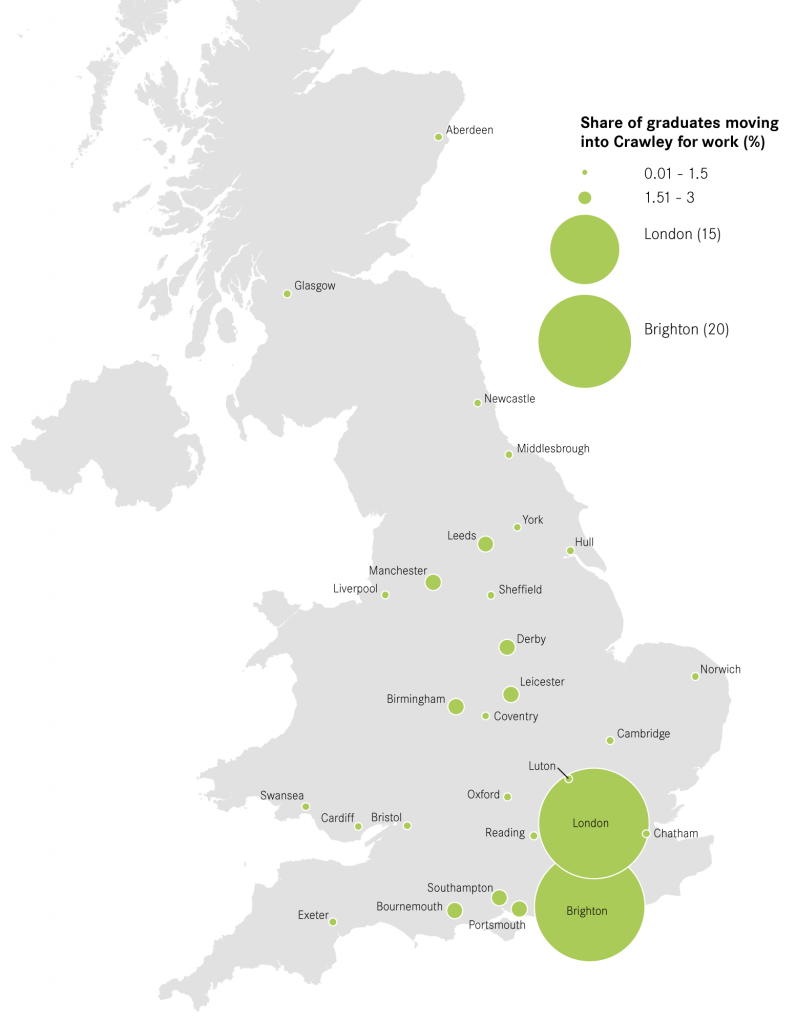 This meant that Crawley experienced a “new graduate gain”

Combining this data on student and new graduate moves shows that overall Crawley gained from these migration patterns. Between 2013 and 2015, 615 graduates who responded to the survey had left Crawley to go to university elsewhere. Of these, 185 returned after graduation. These returners were joined by 735 graduates who did not grow up in Crawley moved to the city for work (Figure 16).