02The importance of city centres to the national economy

The clustering of jobs in businesses in cities and large towns, and city centres in particular, shows the central role they play in the national economy. City centres cover less than 0.1 per cent of land but house 8 per cent of businesses and 14 per cent of jobs. Importantly, they are not just home to many jobs – they are particularly attractive to more high-skilled exporting jobs that tend to have higher levels of productivity (see Box 3).

These businesses are attracted to city centres over other parts of the country by the benefits that these areas offer. In particular, there are three benefits to locate in the city centre:

The varying performance of city-centre economies suggests that some city centres are more successful at offering these benefits than others. As Figure 1 shows, there is a great deal of variation in the performance of Britain’s city-centre economies. While the centres of places such as Manchester, Reading and London have large shares of high-skilled exporting jobs in them, the opposite is the case for the centres such as those of Swansea, Stoke and Middlesbrough.

These cities have struggled to attract exporting jobs, and those that are located there tend to be lower-skilled activities. This affects the job opportunities available and wages on offer to people who live in and around them.

Additionally, Figure 1 shows that the densest city centres are also stronger city- centre economies — most of the cities with dense city centres (indicated by the size of the bubble) are located in the upper-right quadrant. Stronger city centres have on average 180 jobs per hectare, reflecting their attractiveness as places to do business.

To define city centres, a circle was drawn around the centre of a city. The radius of this circle was varied according to the population size of the city.

The radii used were:

From those under consideration, nine which meet these criteria can therefore be classified as having strong city centres. A more detailed list can be found in Appendix 1.

Figure 1: The size and composition of a city centre’s exporting base and the density of the city centre 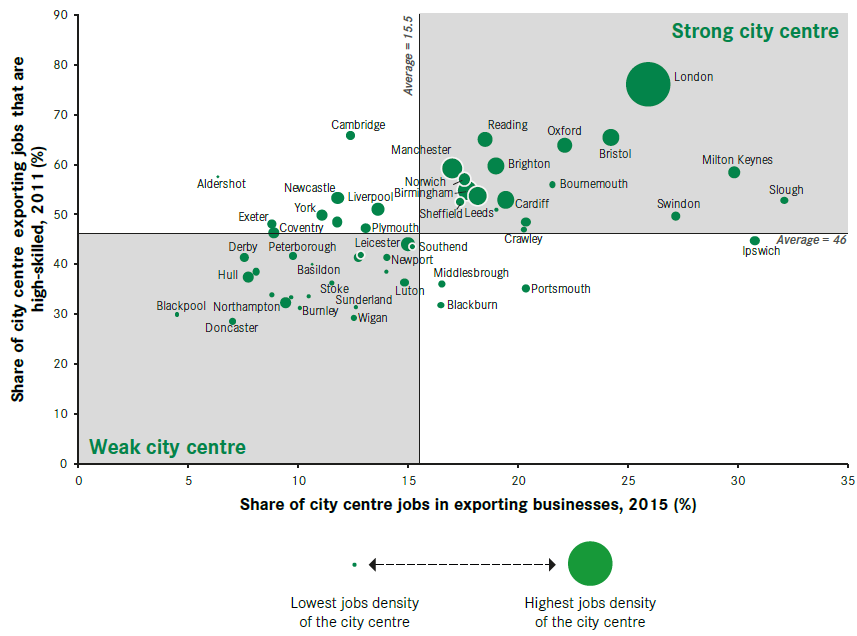 Box 3: The role of exporting businesses in city economies

There are two types of private sector business:

Local services sell directly to consumers. They include estate agents and amenities such as hairdressers and cafes. As a result, their location decisions are determined predominantly by where their customers live, work or trade from. They are also known as ‘non-tradable’ businesses.

Exporting businesses, such as investment banks, advertising agencies and manufacturers, sell their products or services outside their local area to regional, national, and international markets. Unlike local services, these exporting businesses are not tied to one local market. They are also known as ‘tradable’ businesses.

They generate income independent of the performance of their local economy, because they sell to other markets.3

They tend to be more productive than local services firms and are drivers of productivity increases over time. For example, while a hairdresser is as productive as 50 years ago, a worker in a car factory is now many times more productive.4

Exporting businesses have a multiplier effect on jobs in local services. The better they perform, the higher the local disposable income in the economy, so the higher the demand for the goods and services of local services such as shops and restaurants. All exporting businesses have a multiplier effect, but it is much bigger for high-skilled exporters than for low-skilled exporters. For example, for every 10 new high-skilled exporting jobs created between 1995 and 2015 in urban Britain, 17 new jobs were generated in low-skilled local services.5

For the purpose of this research, exporters and local services are defined using Standard Industrial Codes (SIC).6 We use these to identify jobs in sectors that have the potential to sell to markets beyond their local area.

As the UK economy has increasingly focused on higher-skilled, more knowledge- based activities in recent years, some city centres have become increasingly attractive places to do business. This has meant that a greater number of jobs, in particular high-skilled service exporting jobs have located in very particular geographies, increasing the density of these city centres.

Those city centres that have seen the strongest growth in jobs have tended to be those that already had relatively dense city centres. As Figure 2 shows, there is a positive correlation between jobs density in 1998 and 2015 for city centres as demand to access these city centres has grown. Besides London, the city centres of Manchester, Leeds and Birmingham had a particularly large increase in city-centre jobs. The number of jobs in Manchester city centre, for instance, increased by 84 per cent to 2015.

Given the UK economy is likely to continue to specialise in high-skilled activities, it is probable that city centres will play an ever-larger role in the national economy. But only those city centres that offer the benefits that high-skilled exporting businesses are looking for are likely to profit from this. 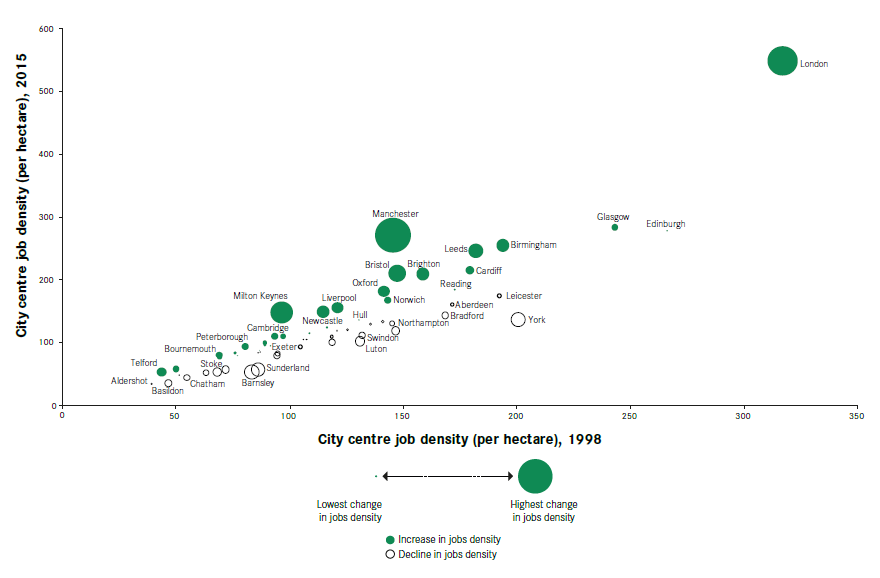 As city centres grow, an increasing number of commuters funnel into a fixed location. This requires a transport system able to cope with an increasingly large number of passengers if its ability to support future growth is to be sustained.

The following section explores in which places in Britain new infrastructure investment could have the largest impact on the local economy to improve economic growth.

Transport’s direct economic role in supporting a city centre is to widen the pool of labour that can access city-centre jobs as much as possible. The skills level of the local labour market, as well as the profile of the existing business base are the fundamental drivers of city-centre performance and the location decisions of highly-productive firms between areas. While the quality of a city’s transport system will have some bearing on this, it is likely to be more marginal compared to these other factors.