The case for bus franchising elsewhere starts with London. London’s bus system works. Since 2000 the Mayor of London has decided which routes to run and how frequent buses should be. As Figure 1 shows, passenger journeys have consistently outstripped those made in other English cities since. 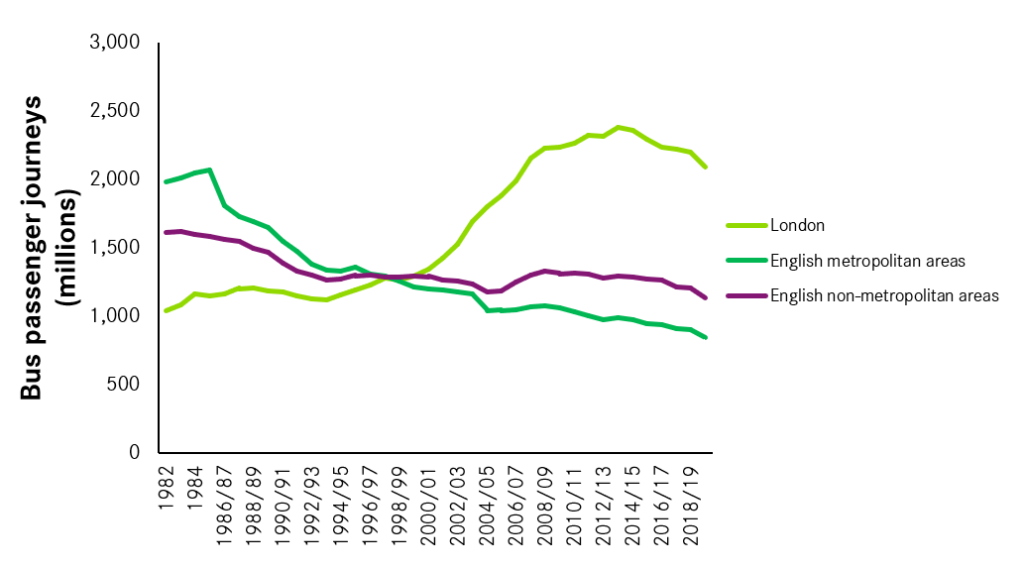 In the capital, bus operators bid for routes which they run to meet service quality targets; in return they are paid a fee. The Mayor’s transport agency oversees consistent branding, maps and online services. Ticketing is integrated with other forms of public transport and fares can be paid using contactless cards or mobile phones. This payment system, one of the most sophisticated in the world, had been in place for more than a decade.

Today London’s bus network is regularly held up as an example of how a metropolitan bus system should work. Its operation has largely transcended politics; while the best type of bus to run has sparked discussion, the principle of a regulated, franchised system ultimately specified by the mayor has been accepted by Labour and Conservatives. No serious politician is arguing that this system should be changed.

The model in other English cities is different. Since deregulation bus operators have been free to run services on those routes they predict will generate a return. Local authorities commission and pay for additional routes which are deemed important for the community but which are unlikely to be commercially viable. Integrated ticketing is widely recognised as a prerequisite for successful public transport but, even in those cities where it is available, tickets are not accepted by all operators or all public transport modes.

There have been success stories. Partnerships between operators and local authorities have sometimes delivered. And yet the statistics tell a story of decline; since deregulation in 1986 bus use outside London has fallen significantly. More people use buses in London than other cities. Local transport chiefs have become frustrated at short-notice service changes imposed by bus operators and having to scramble to find funds to maintain lifeline services. In most cities there is a feeling – voiced by both transport chiefs and passengers – that bus services could be better than they are.

One thing that is consistent between London and other English cities is expectations. Londoners expect a comprehensive, reliable bus network and look to the mayor to deliver. The mayor, in turn, has the power to organise services to meet these expectations.

Across the country as we recover and respond to the challenges imposed by the pandemic, and the demand for buses settles down, the fundamental passenger expectations of reliable, frequent, safe, convenient services will remain. But in addition, mayors are now expected to make use of buses as a tool for driving the post-Covid economic recovery, as well as to cut local emissions.