04Do businesses feel that their voice is being heard?

Overwhelmingly, business leaders surveyed nationally do not feel they have been consulted very much during the ongoing devolution process (79 per cent feel they were consulted only a little or not at all against 2 per cent who felt they had been consulted a lot).

Figure 5: “To what extent, if at all, do you feel that local government leaders have consulted you / your business for your views about proposals for more devolved powers?” 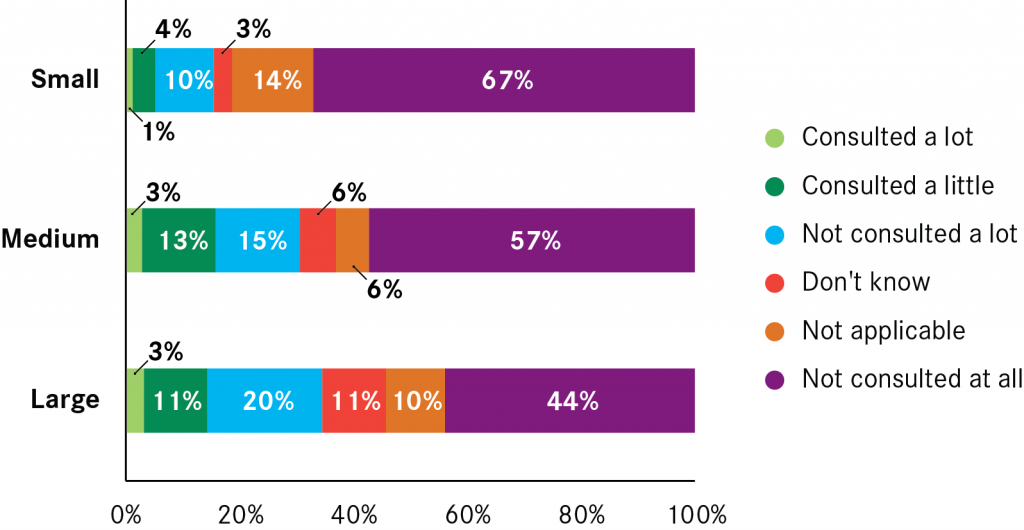 This feeling was particularly acute among smaller firms. Only 5 per cent of small firms thought that they had been consulted either a lot or a little about the proposals for devolved powers, whereas 16 per cent of medium-sized firms and 14 per cent of large firms felt that way. Over two-thirds of small businesses (67 per cent) said they were not consulted at all, compared to 57 per cent of medium-sized businesses and only 44 per cent of large firms. This is perhaps to be expected. With greater individual resources, visibility and a more consistent and wide-ranging interest in national policy debates, large firms are more likely to be engaged with local and national politicians on these issues.

Figure 6: “As a business owner do you feel that you have had the opportunity to voice your opinion in the devolution process?” 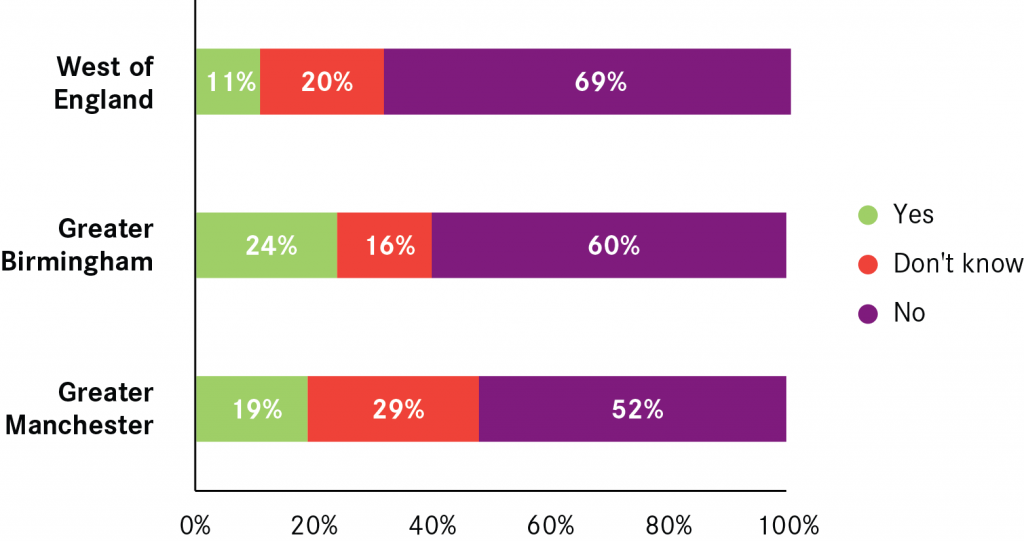 This sentiment was reflected in the Manchester roundtable which saw a level of confusion amongst some businesses as to when and what they would be consulted on. Participants highlighted that in many respects it is the current ‘stage’ of the process that they can most usefully contribute to – the decision over which powers would be useful and the way in which they are deployed – rather than earlier phases of political deal making and bargaining.

In Birmingham, while businesses did not feel that they had been consulted, there was an understanding that the speed at which negotiations of this kind need to progress mean that consultation is often not possible.

How should business be consulted?

Firms across our case study city-regions were uncertain about how to get involved in the debate. The opportunity to shape the debate was important to them, but the Government’s proposal for a ‘majority of businesses or LEPs’ to sign off some decisions was not viewed as the only option for them to be consulted.

Around half of firms in Greater Manchester (51 per cent) and Greater Birmingham (47 per cent) were happy for their LEP or local Chamber to represent them. In the West of England, business leaders were split, with 38 per cent wishing to engage through their Chamber or LEP, against 38 per cent who would rather be consulted directly about any proposed changes to policy.

In all the roundtables business leaders talked of business’ role in the process of devolution as integral, but this meant different things in different cities. In Manchester, it was felt that the speed of progress meant some businesses would be left behind in discussions. In Glasgow, some commented that they had found the process by which they made their voices heard both opaque and difficult. In Birmingham, participants warned that while the LEP and Chamber were useful tools, there was some concern about whether certain large embedded firms would have a greater say in investment priorities at the expense of smaller firms.