01Why do Fast Growth Cities matter?

Although individually they all have populations below 270,000 people, the Fast Growth Cities are some of the strongest performing of all UK cities on a range of economic indicators.

The Fast Growth Cites are among the UK cities with the highest GVA per worker, with three featuring among the top 10 cities in the UK – Milton Keynes, Oxford and Swindon (Table 1). Combined, the Fast Growth Cities generate £57,000 per worker; over £3,000 more than the British average of £53,700.

Reflecting their high productivity, the Fast Growth Cities generate high levels of economy1 tax per worker and consume low levels of government expenditure (Table 2). The five cities punch well above their weight on these measures, with Cambridge, Milton Keynes and Oxford performing particularly well and generating around twice as much in economy taxes as is paid out to them in Government expenditure. This reflects that these three cities in particular are high wage, low welfare economies2 and that all the Fast Growth Cities have strong economies that make important contributions to the Exchequer.

Accompanying these high employment rates, Cambridge, Norwich and Oxford have also seen strong growth in employment since 2010. Oxford has seen the 6th fastest rate of growth out of any UK city, with a rise of 5.9 percentage points compared to the UK average of 2.7. In contrast Swindon has seen virtually no growth over this period, but began 2010 with the highest employment rate of the Fast Growth Cites (of over 76 per cent) and has maintained a high rate since. 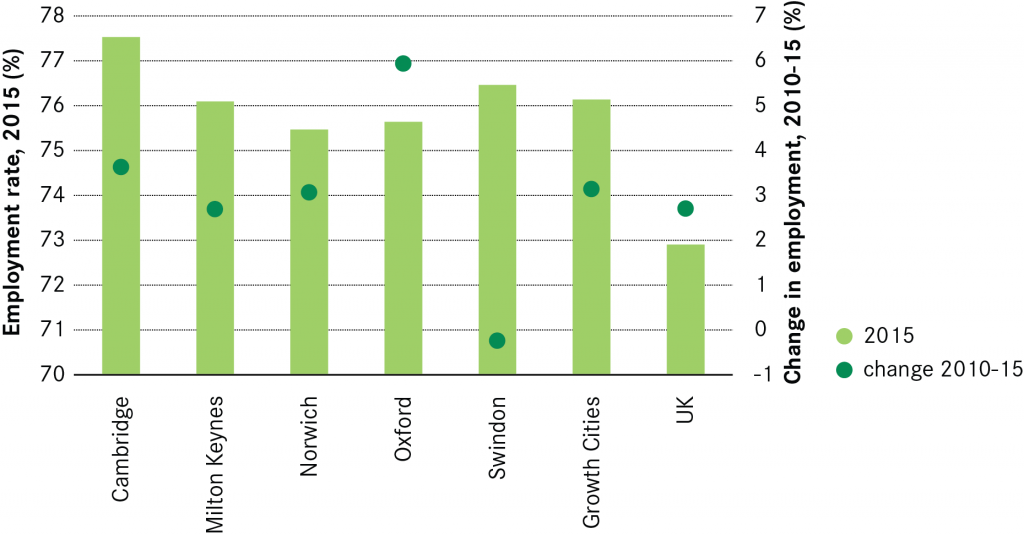 This strong employment rate has been accompanied by strong private sector jobs growth, in Cambridge (15.2 per cent), Milton Keynes (14.3 per cent) and Oxford (17.8 per cent) over the last 5 years, placing them in the top 5 of UK cities. This growth is not only larger than that seen in similarly sized northern towns, where the highest growth was seen in Sunderland (6.4 per cent) and York (4 per cent), it is also greater than that experienced by similar sized cities in the South and East of England, such as Peterborough and Luton, which saw growth of around 10 per cent. The strong performance of the three Fast Growth Cities has been driven by both their ability to attract new companies to the area and existing companies expanding.4

Swindon and Norwich have seen much smaller growth in private sector jobs. Swindon Borough Council attributes this to the large manufacturing losses experienced up to 2012 and the growing shortage of office space in the city (see next section).4 However, Swindon has still performed better than other cities of comparable size in the South West, with Gloucester, Plymouth and Exeter experiencing either no growth or negative growth (Figure 2). 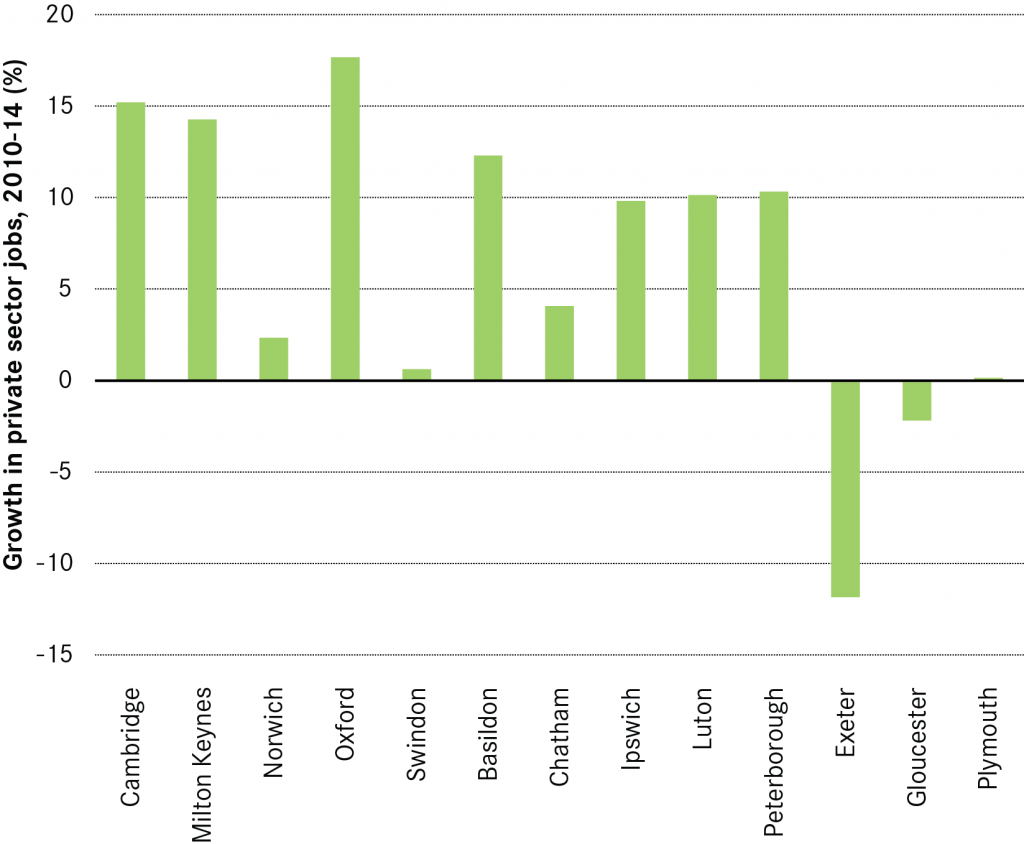 Swindon has also seen the 2nd largest increase of any UK city in its share of private sector Knowledge Intensive Business Services (KIBS) jobs, which tend to be higher skilled, better paid jobs (Figure 3). And while Norwich has seen slow growth in private sector jobs overall, it has also seen significant growth in private KIBS jobs since 2010. Along with Cambridge and Milton Keynes, these four cities currently place in the top 20 of UK cities for share of KIBS jobs, reflecting their various strengths in research, the digital and financial sectors and advanced engineering/manufacturing.

The large share of high skilled jobs means that the jobs available in the Fast Growth Cities offer relatively high pay, with average weekly wages in 3 of the cities (Cambridge, Milton Keynes and Oxford) more than 15 per cent above the national average (Figure 4). All the Fast Growth Cities have also seen an increase in earnings since 2012 of at least the UK average, with the group as a whole experiencing an increase of £38 per week – more than double the UK increase.

The rates at which businesses start up and close down provides a key indication of the strengths of a city’s economy, with new businesses providing economic dynamism and an important source of job creation.

All the Fast Growth Cities have seen higher starts than closures over the last ten years (Figure 5). In Swindon and Milton Keynes the number of starts has increased by twice the national average. And with 75 starts per 10,000 of the population, Milton Keynes is 3rd for start-ups out of the UK’s largest 63 cities.

Figure 5: Business starts and closures per 10,000 of the population

The Fast Growth Cities also deliver a high number of patents, with all featuring in the top 12 of UK cities, indicating their strengths in innovation. Cambridge is first with 101.9 patents per 100,000 of the population, far above the UK average of 3.6. Driven by Cambridge’s performance, the Fast Growth Cities on average generate 20 patents per 100,000 of their population; over 5 times more than the UK average.

Over the last 10 years, these cities have seen some of the fastest population growth of any UK city. Cambridge, Milton Keynes, Oxford and Swindon have all experienced annual growth rates of around twice that of the UK (Figure 6). Milton Keynes, which has seen the fastest growth within the group, is the UK’s 2nd fastest growing city, seeing growth of 18.1 per cent over the last 10 years. Swindon, with a rate of 15.8 per cent places 4th, Cambridge 6th (14.5 per cent), Oxford 12th (11.6 per cent) and Norwich 33rd (7.6 per cent). 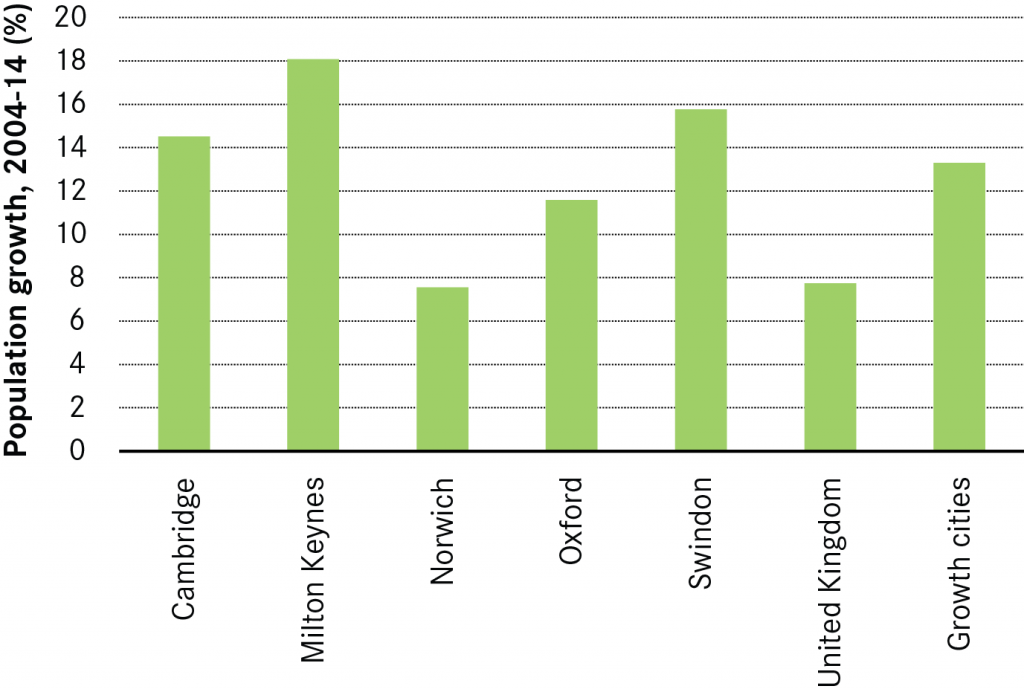 This population growth, while an indication of the attractiveness of these cities, places pressure on infrastructure, particularly transport and housing. Milton Keynes in particular faces the additional challenge of having a population ageing far more rapidly than the national rate, which will increase the demand for public services in the future.

The above summary illustrates the collective and individual strengths of the Fast Growth Cities. As a group and individually they make a key contribution to the UK economy, as they:

With their continued ability to attract both businesses and workers, the Fast Growth Cities are in a strong position to continue to grow and maintain this high contribution to the UK economy. The future performance of this group of cities is important to the UK’s future growth prospects. Policymakers should make the most of the opportunities these cities offer in their continued effort to bring down the deficit and increase productivity.