The Fast Growth Cities are among the best performing cities in the UK on many measures, but they face a number of challenges as a result of their strong growth. Key barriers that the cities are working to overcome include:

These challenges are increasingly hampering the cities’ ability to continue growing at their current rate, affecting the attractiveness of the cities as places to live and invest.

The average distance travelled into work by those working in Cambridge is 25km. As shown in Figure 7, there are high levels of in-commuting from the surrounding areas, including nearby towns and villages such as Great Shelford and from further afield such as Newmarket. This pull on nearby areas adds to the congestion in Cambridge, making it difficult to move around the city and leading a number of businesses to complain about travel times relative to other cities. Similarly, Oxford finds its transport network is overwhelmed by the level of traffic both in and around the city due in part to high levels of in-commuting. The average distance travelled by those employed in Oxford is 36km, with people traveling into the city from a range of surrounding towns, including Didcot and Bicester.

In Swindon, commuting distances for workers are even greater, with the average distance travelled to work 45km. Congestion is concentrated around Junctions 16 and 17 of the M4, which are already beyond capacity. Rail freight capacity has also been highlighted as an issue by Swindon Borough Council, which poses a particular problem for the city’s automotive industry.6 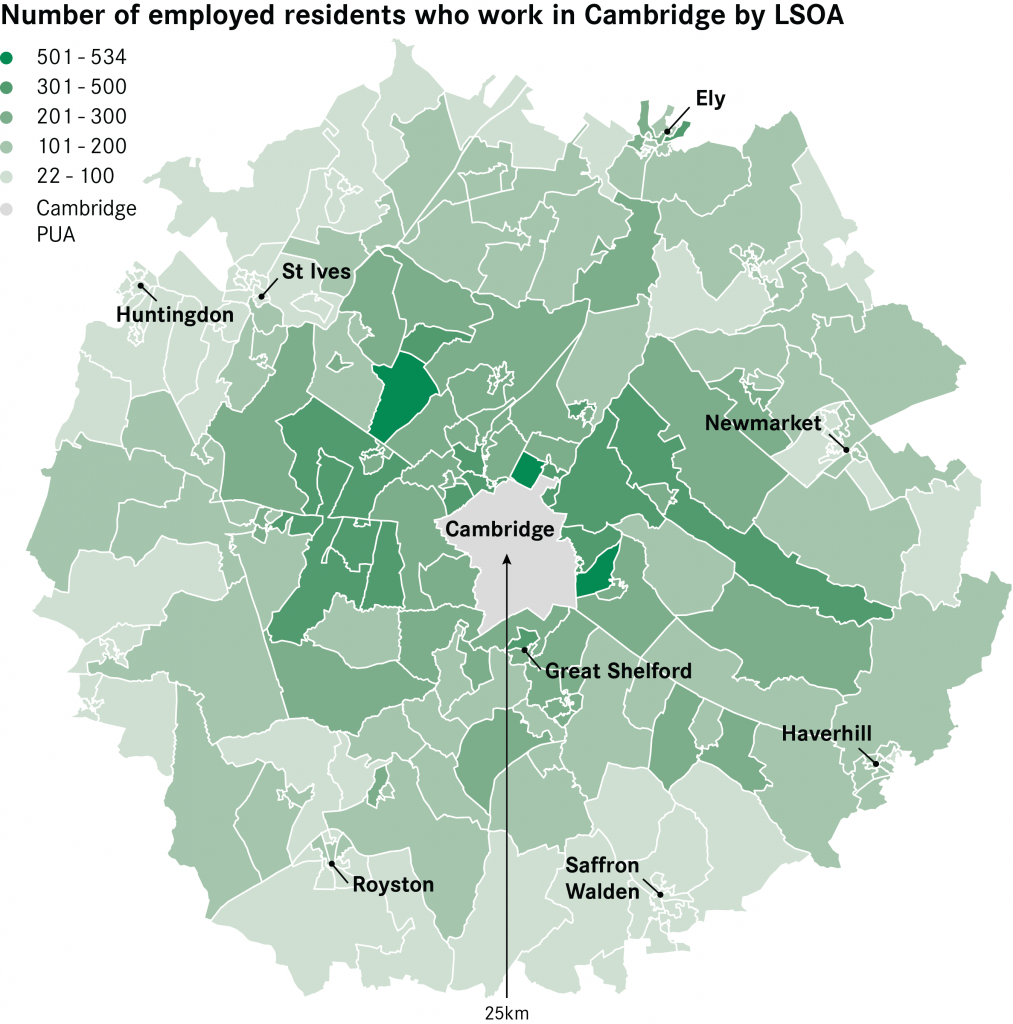 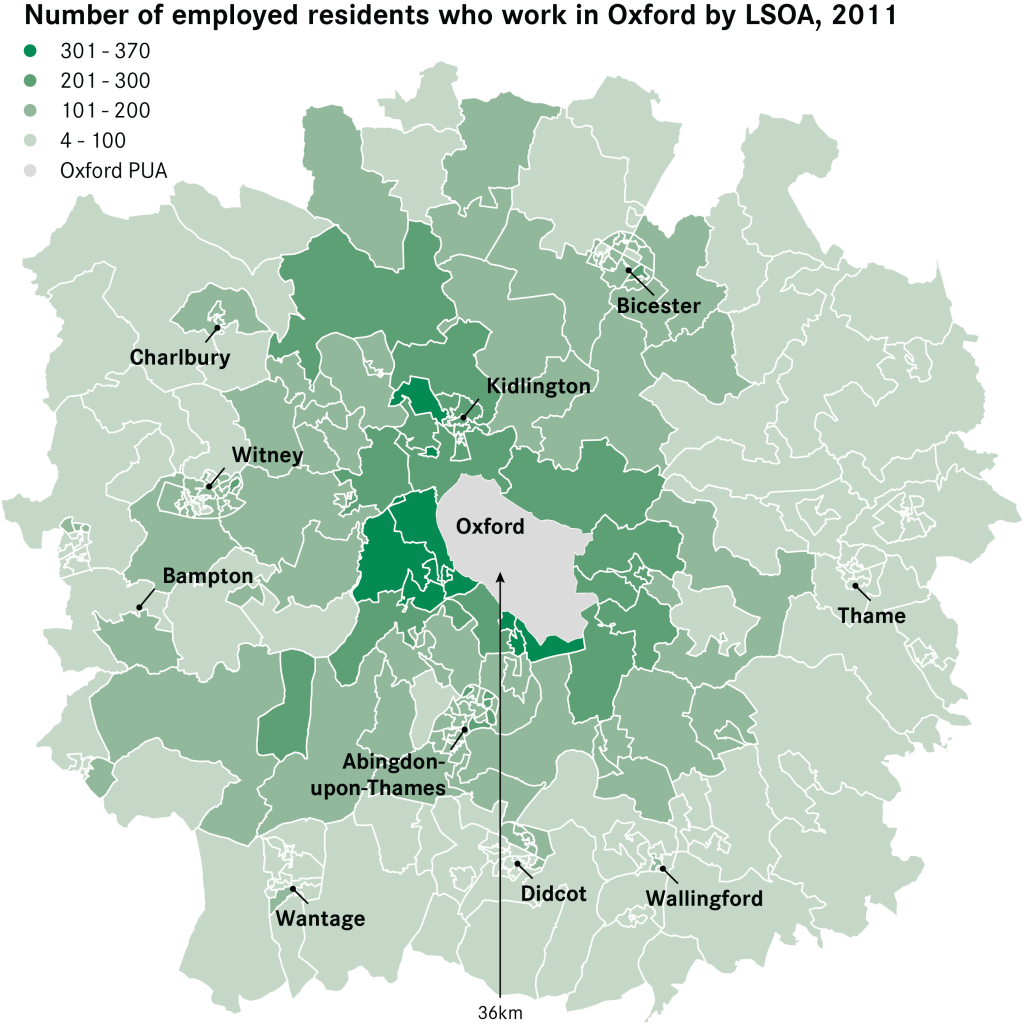 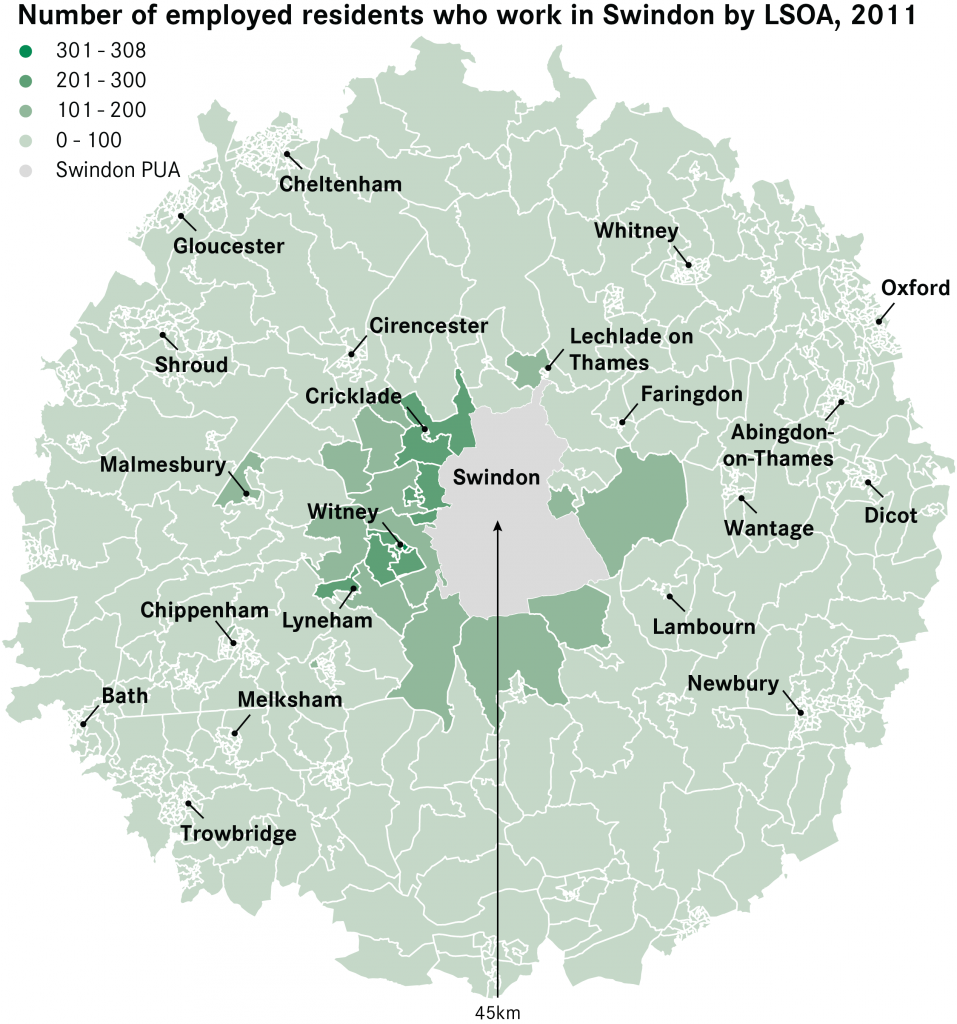 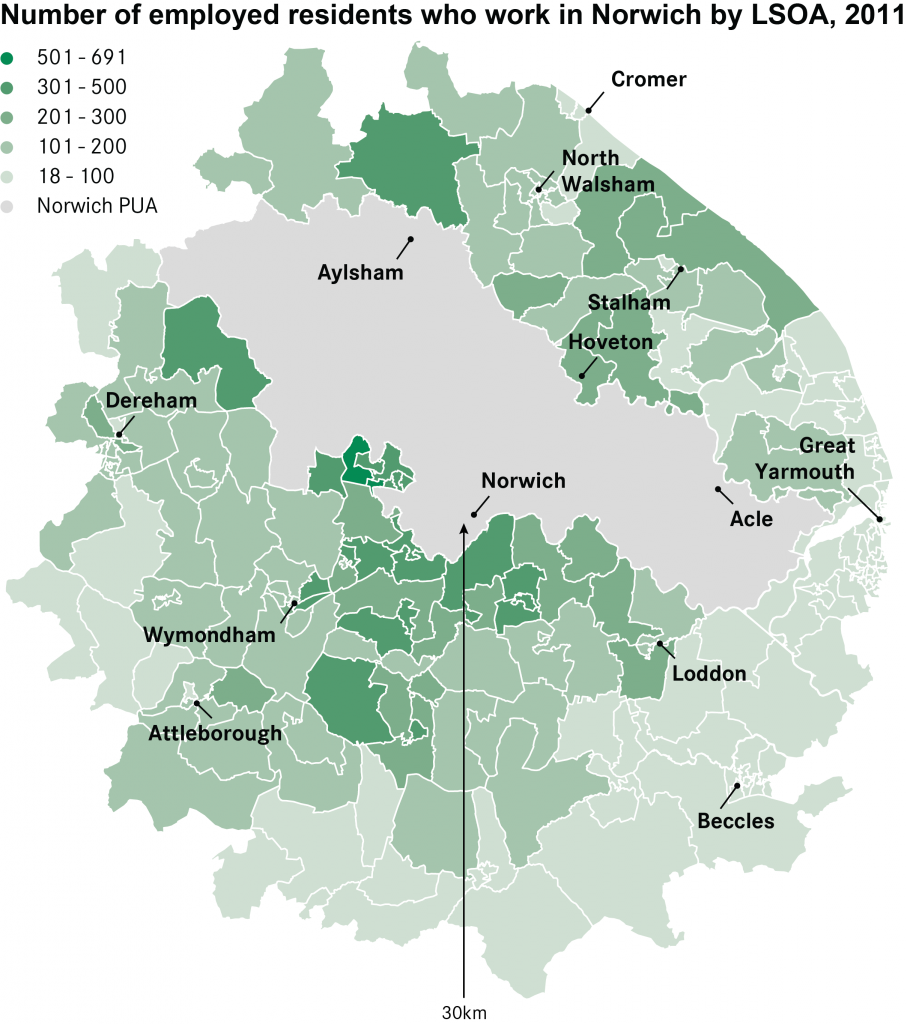 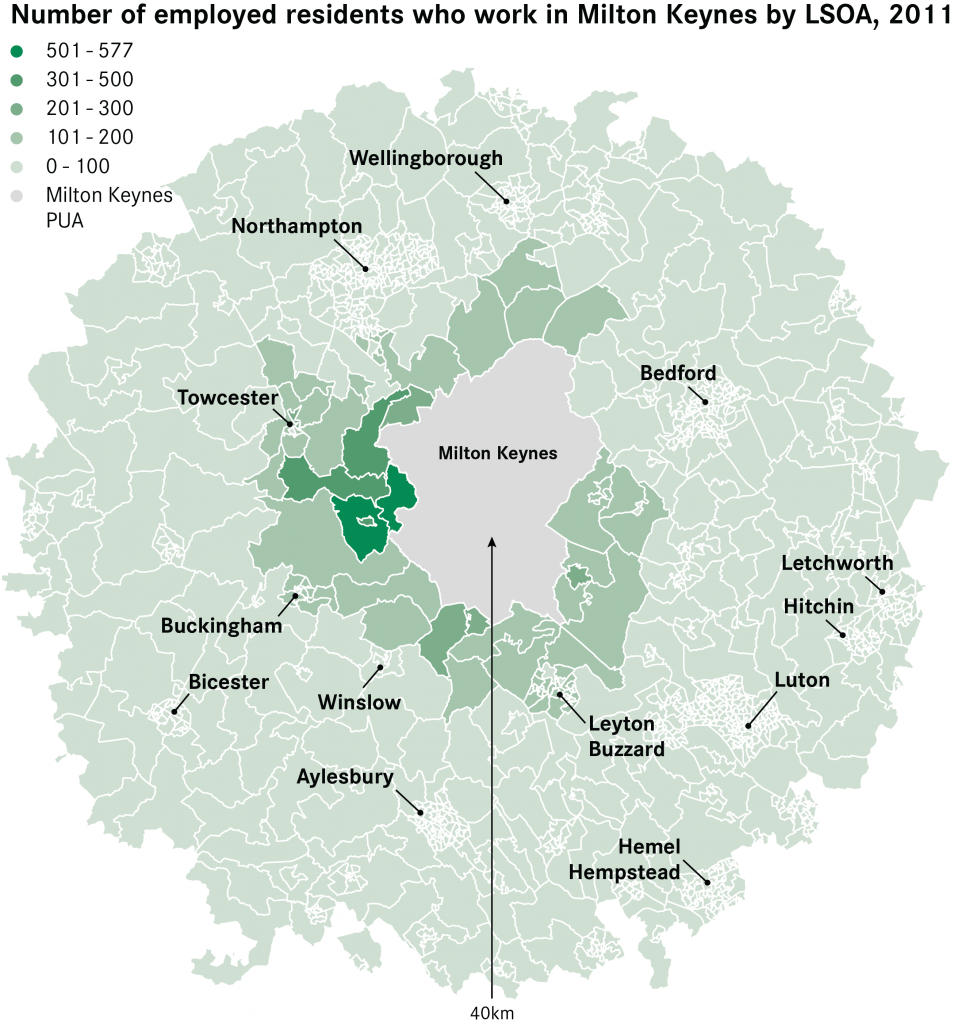 Congestion is less of a concern in Norwich, but the city suffers from poor public transport, particularly from its hinterland into the city. As shown in Figure 7, high numbers of workers commute into the city, and with an average commuting distance of 30km, the city is keen to improve its public transport service for surrounding areas. The city also suffers from a lack of a fast train into London, with the current journey taking two hours due to a high number of stops. By way of comparison, it takes just over half the time to get to Leicester, despite the city being a similar distance from the capital. For a city that has an ambition to grow its finance sector, this is a drawback. In response the city has launched a ‘Norwich in 90’ minutes campaign.

Commuting into Milton Keynes is similarly spread out, with an average distance travelled to work of 40km. While the city is well connected by road and rail, its large population growth has led to increased congestion which is expected to increase by a further 60 per cent over the next 20 years. The current infrastructure developments can only accommodate around 25 per cent of this increase. This is a concern for the city, which has historically regarded its low congestion and fast commuting times as one of its key attractions for both residents and businesses, and relies on commuters to fully meet its demand for high skilled workers.

The Fast Growth Cities are fully aware of the problems associated with growing congestion and are keen to invest in their transport networks. However, all find that the developments needed to overcome these issues are held back by the short-term nature of funding, which prevents the city from taking a more strategic approach to transport and pursuing longer term projects. Solutions that the cities would like to take forward include an overhaul of the public transport system in the case of Oxford and Norwich, rather than solely concentrating on road improvements that while necessary and quicker don’t deal effectively with congestion in the longer term; and the development of a new motorway junction on the M4 for Swindon.

All of these require significant investment. To allow the cities to progress these projects, longer term funding is needed, in the same vein as the transport funding models created in cities such as Manchester and Sheffield through their devolution deals. This would give the cities more certainty that funding will be available for the life of these projects, allowing them to move forward with their plans.7

Housing is an increasing problem for the Fast Growth Cities, with a slowing supply of new houses in some of the cities leading to high prices and low affordability. This also puts pressure on welfare spending, as increasing rents push up spending on housing benefit. With housing provision a key determinant in attracting and retaining people, this presents real problems for the continued economic growth of the group.

Oxford currently has the greatest affordability issue of any city in the UK, with average house prices more than 16 times the average wage in the city, making it even less affordable than London (Figure 8). This is due to the tightly bound nature of the city, with added restrictions on building from conservation sites and flood plains. As less land becomes available for development, the growth in housing stock has drastically reduced, falling from 520 over 2004-5 to just 70 over 2013-14, a fall of 87 per cent (Figure 9). It is estimated that from 2011-2031, around 24,000-32,000 new homes will be needed in Oxford but current land constraints allow for only around 10,000 of these to be built within the city.8 The city is working with neighbouring districts, landowners and developers to identify locations for housing, and as part of the policy to address its shortage, would like to see a review of the green belt take place, freeing up land that is currently protected but not actually of high amenity value.6

Cambridge is also facing a worsening housing shortage. Its current affordability ratio is only slightly lower than Oxford’s, following a large increase over the last two years. This has arisen despite the city increasing levels of house building, with the increase in housing stock rising from 620 over 2004-5 to 1,300 over 2013-14 (Figure 9). Currently, both Cambridge and Oxford find that Government schemes designed to assist with house buying have little to no effect, as prices are so high that even with policies such as the 20 per cent first time buyer’s discount, homes are still far out of reach for many. Similarly, the cities would like policy to recognise their high house prices. For example, Oxford would like to see the earnings threshold at which those in council or housing association properties are charged full market rates increase from £30,000 to the £40,000 set in London.6

Milton Keynes, Swindon and Norwich all currently have an affordability ratio below the UK average of 9.8 but have seen housing become more unaffordable over the last 10 years. In particular, Milton Keynes has seen prices increase by 16 per cent over the last two years, compared to 7 per cent in London and 12 per cent in Cambridge. For Milton Keynes, Swindon and Norwich, the relative affordability of housing has been one of the key attractions of their cities, with Milton Keynes in particular meeting housing demand spillover from London. Losing this lower living cost advantage is expected to impact on the draw of these cities.6

While Milton Keynes, Swindon and Norwich find there is no immediate land constraint on their house building, they are seeing, along with Cambridge and Oxford, that the high cost of development, the increasing competition for land between housing and employment uses, and Government caps on how much they can borrow, severely limits the rate at which they can get homes built. Giving the Fast Growth Cities greater freedom to borrow through the Housing Revenue Account would enable them to provide more of the affordable housing they need.

The constraint on house building reduces the Fast Growth Cities’ attractiveness as a place to live. Employers in Oxford and Cambridge, including the NHS, BMW and state schools are already reporting skill shortages linked to the high house prices and the resulting difficulties in recruiting and retaining workers. Additionally, Oxford and Cambridge universities have concerns that the housing situation may constrain their ability to attract top academics and researchers. This difficulty in attracting workers has a knock-on effect on the city’s ability to attract firms, who are beginning to voice concerns over meeting their labour demands, as workers increasingly find they cannot afford to live in the city.6

Given many of the growing sectors in these cities operate in global sectors and markets – such as the finance and digital sectors – the reduced attraction of these cities on firms is likely to impact on the UK economy as a whole, as businesses will choose to locate outside of the UK rather than in a different UK city. This may be a particular issue in Swindon, which along with unmet housing needs also has a shortage of office space. While the city allocated 75 hectares to employment land in 2012, only 14 hectares are still available for development. This is pushing up the price of industrial and warehousing stock in the city. With Swindon being one of the most attractive UK cites for foreign firms, where over 7 per cent of firms are from outside of the UK,13 this combined shortage of housing and office space may impact on the UK’s ability to attract overseas investment.

All the Fast Growth Cities face, to varying degrees, an issue with residents who have no formal qualifications. Cambridge has actually seen this proportion rise slightly over the last 10 years, from 8.9 per cent to 9.0 per cent, rather than decline as seen in the other Fast Growth Cities (Figure 10). Low skills prevent those that live in the cities from benefiting from the jobs growth the cities have experienced, and along with housing unaffordability, contributes to a concentration of deprivation within certain areas of the cities. In Norwich, this is compounded by many graduates going into non-graduates roles, pushing up competition for these jobs.6 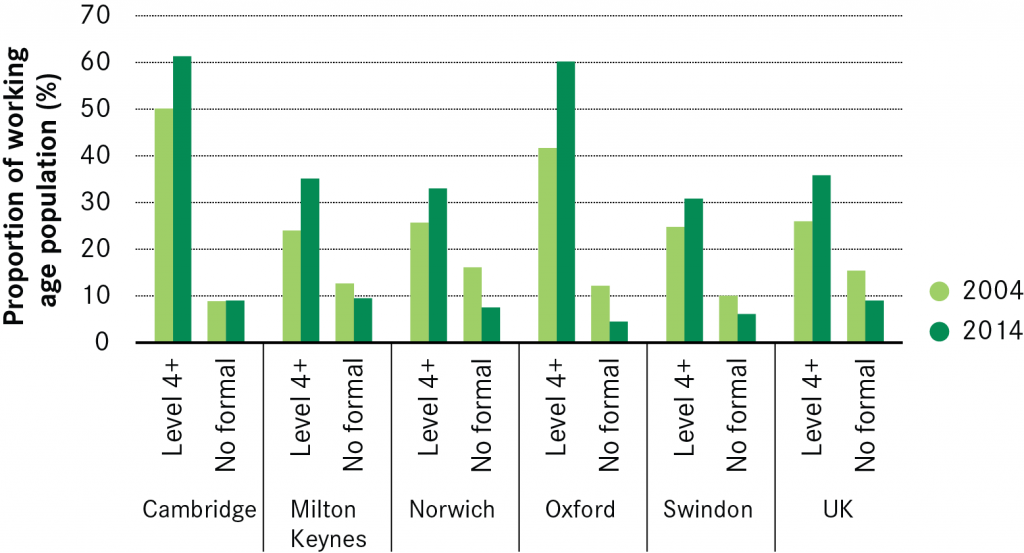 While Cambridge and Oxford have exceptionally high proportions of residents with degree level qualifications (level 4 plus) at nearly twice the UK average, Milton Keynes, Norwich and Swindon have average or below average rates (Figure 10). Milton Keynes, which has a high share of KIBS jobs but no strong higher education institute, is currently able to meets its need for high skilled workers by people commuting into the city each day. But with congestion increasingly an issue within the city, there are questions over how long this will remain the case. Swindon similarly suffers from a lack of a higher education institute, with no university in the entire Swindon and Wiltshire LEP. And despite high skills levels in the city, Cambridge City Council reports skills shortages among young people in STEM areas.

The Fast Growth Cities also face issues with graduate retention. Cambridge and Oxford find that graduates, including PhD students attracted from abroad, leave as a result of high house prices, while Norwich finds graduates tend to be attracted to higher paying roles in London.6

With recent GCSE performance below the UK average for each city apart from Cambridge, these skills challenges represent a threat to the continued strong growth of these cities. Giving the cities more power and influence to address these issues, such as more say in how funding for skills, training and apprenticeships is spent to align course provision with employer need, would enable them to better address these weaknesses.