03The impact of the pandemic on FGCs

The Fast Growth Cities were affected significantly by the pandemic, but most of them were less affected than other UK cities

This mainly results from the industrial structure of the FGCs. Oxford and Cambridge for instance have high shares of their workforce in jobs which were not directly affected by the pandemic and can be done from home, such as managerial or research jobs.12 However, Oxford and Cambridge are also highly reliant on footfall from tourists, students and office workers which will impact significantly on city centre economies.

Figure 16: The Fast Growth Cities are strongly affected by the crisis, but most of them are less affected than other UK cities

High streets all over the country are seeing a slow recovery when it comes to footfall, but some Fast Growth Cities are catching up faster than others

The Centre for Cities High Streets Recovery Tracker shows how quickly high streets in the UK’s largest cities and towns are returning to their previous levels of activity, and the drivers behind it. It uses anonymised mobile phone data which is updated monthly. Figure 17 and 18 look at the impact of the first national lockdown, which may give some indication of how places will respond when restrictions can finally be removed. Figure 17 shows that, for all cities across the UK, there was a sharp decrease in city centre activity after the lockdown was introduced.

At the height of the pandemic, footfall in most city centres dropped to less than 20 per cent of pre-pandemic levels. Since the restrictions were loosened in May, centres have started to recover but in August 2020, most were still below their pre-lockdown levels.

Figure 17: Not all high streets recovered at the same speed after the first national lockdown was relaxed 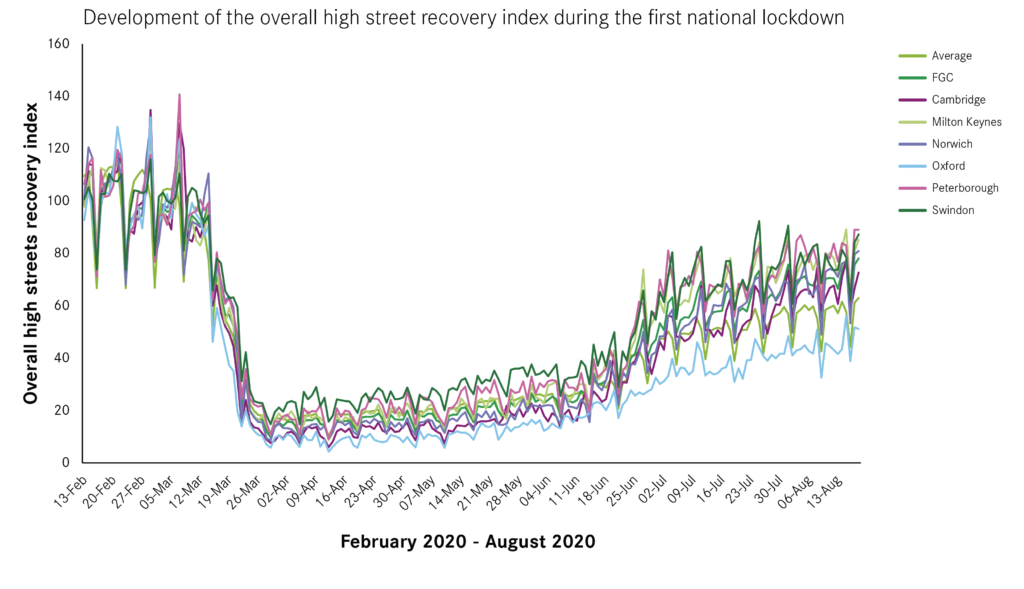 For the FGCs, Figure 18 shows a range in how quickly city centres have returned to their previous levels, shown in the latest overall weekly score for each city.

Cities more dependent on visitors from outside the city centre (e.g. students and tourists) such as Norwich, Oxford and Cambridge were seeing slower recoveries. Oxford was particularly hit, as in August 2020, footfall was still below 50 per cent of its pre-pandemic levels. Swindon, Peterborough and Milton Keynes were less frequently visited by tourists and have comparatively fewer workers coming from outside their cities. While this is a sign of lower performance in normal times, more local catchment allowed them to recover more quickly towards their pre- lockdown levels.

Figure 18: Cities such as Norwich, Oxford and Cambridge that are more dependent on visitors from outside the city centre, such as students and tourists, saw slower recoveries 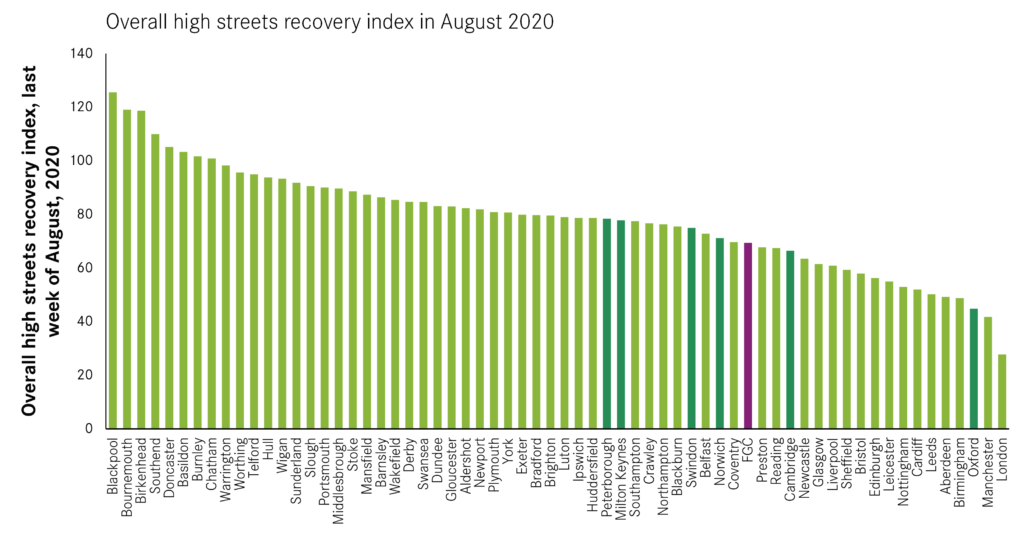 The drop in footfall had consequences for the spending in the city centre as illustrated in Figure 19. The spend index looks at relevant offline sales made in the city centre since February 2020. After a sharp drop in spending when lockdown restrictions were at their highest, most cities were on their way to recovery by the end of July 2020. On average, spending in FGCs bounced back to 70 per cent of pre-pandemic levels. But there are stark differences between cities in the group. While Norwich in July was already back on almost 90 per cent of spending compared to the pre-pandemic levels, Oxford was still struggling to catch up. At the end of July 2020, the index was below 50 per cent of the pre- pandemic spending in the city.

Figure 19: After the first national lockdown was relaxed, spending in the Fast Growth Cities did not return to pre-lockdown levels 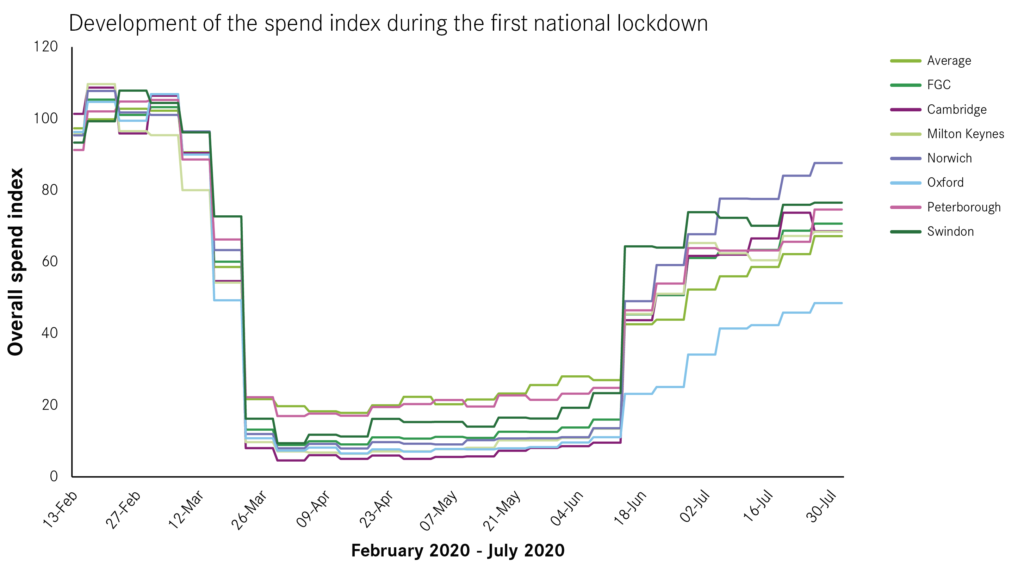