00What is a cluster?

Cities in themselves are clusters, and a mix of many different industries to boot. Cluster policy should really be about encouraging innovation, particularly in cities. And this is done through encouraging knowledge spillovers.

Clusters – the gathering of businesses in the same industry in the same area – have been a popular focus of policy since Michael Porter’s work in the area. But while policy has been in pursuit of creating clusters for many years, actually creating them has been far more elusive.

There are three broad types of cluster:

So what can policy do to encourage the creation of these clusters? Well, in terms of the first two, not a great deal.

The first type of cluster is down to natural geography. There may well be specifics that can be done to support its development, but it obviously can’t be created from scratch unless the natural asset is present. Oil and gas in Aberdeen is an obvious example.

The same holds for the second type of cluster. It seems that it is this cluster that people tend to mean when they talk about cluster policy. But most of these types of cluster seem to come about because of serendipity. No-one really knows how Silicon Valley came about (despite a number of theories) – we merely observe its presence. And while there have been numerous attempts to recreate it elsewhere, the authors are unaware of any that have been particularly successful.

But there are a number of policy levers that can be used to encourage the final type of cluster. Before we get to that though, it’s worth understanding two key points about clusters in cities first.

Firstly, because cities are a mix of a broad range of sectors, they aren’t often considered as clusters. But this is one of their key strengths. Particular industries do cluster within cities, and the importance of links within sectors is likely to explain why we see this clustering. For example, in central London law clusters around Chancery Lane, finance concentrates in the City and advertising has made its home in Soho.

But by co-locating with other industries, the potential arises for innovation to occur across sectors as well as within.1 And this is what cities offer that single industry clusters do not – access to other companies in both the same and other sectors.

This hasn’t stopped valiant attempts from politicians. Past national and local policy shows us that politicians have a great desire to pick out specific industries, through doing things like declaring that they have an advanced healthcare hub, setting up creative industries business space or co-opting an already developing tech cluster and rebadging it as ‘Tech City’. Success on this front has been low.

Given these two things (cluster activity and ability to predict future sector growth), place-based policy should instead be thinking about how it facilitates innovation in cities. This is of course tough, but there are some things we know.

Firstly, density encourages innovation – in the US patent rates have been found to be positively associated with employment densities in the urbanised parts of metro areas, suggesting that density helps spur innovation. And the citations of patents are also more likely to come from the same area as the patent itself.3 While we haven’t got innovation data at such a local level in the UK, Figure 1 shows that the share of high-skilled jobs in city centres increases with density. This means that planning policy is important for supporting innovation, and it should be used to encourage density in city centres. 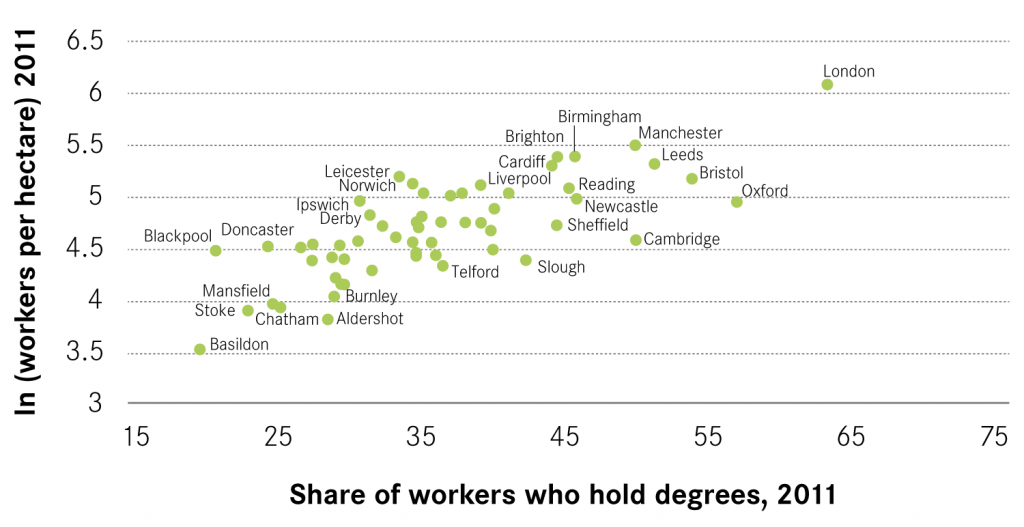 Secondly, innovation requires a skilled workforce. This requires skills policies. And it requires good transport systems to get workers into and out of these innovative areas each day. A later briefing will look at these policies in more detail.

These local interventions should be supported by national innovation policy to encourage investment in research and development. The evidence on what works is patchy – a number of studies have found R&D grants and tax credits to have an impact on businesses, but these are not always positive. They appear to have a bigger impact on smaller businesses than larger ones, and the limited evidence available suggests that both grants and tax credits should be part of any national strategy to support innovation. Given the lack of evidence around this policy, any future efforts to encourage innovation should be rigorously evaluated.