03The residents and workers of the Gatwick Diamond

As noted earlier, the availability of skilled workers is likely to be a big factor in attracting and retaining high-skilled businesses. This section looks at where the residents and workers of the Gatwick Diamond live and work, looking at the implications this has for skills and housing.

Figure 17: Flow of workers to and from the Gatwick Diamond 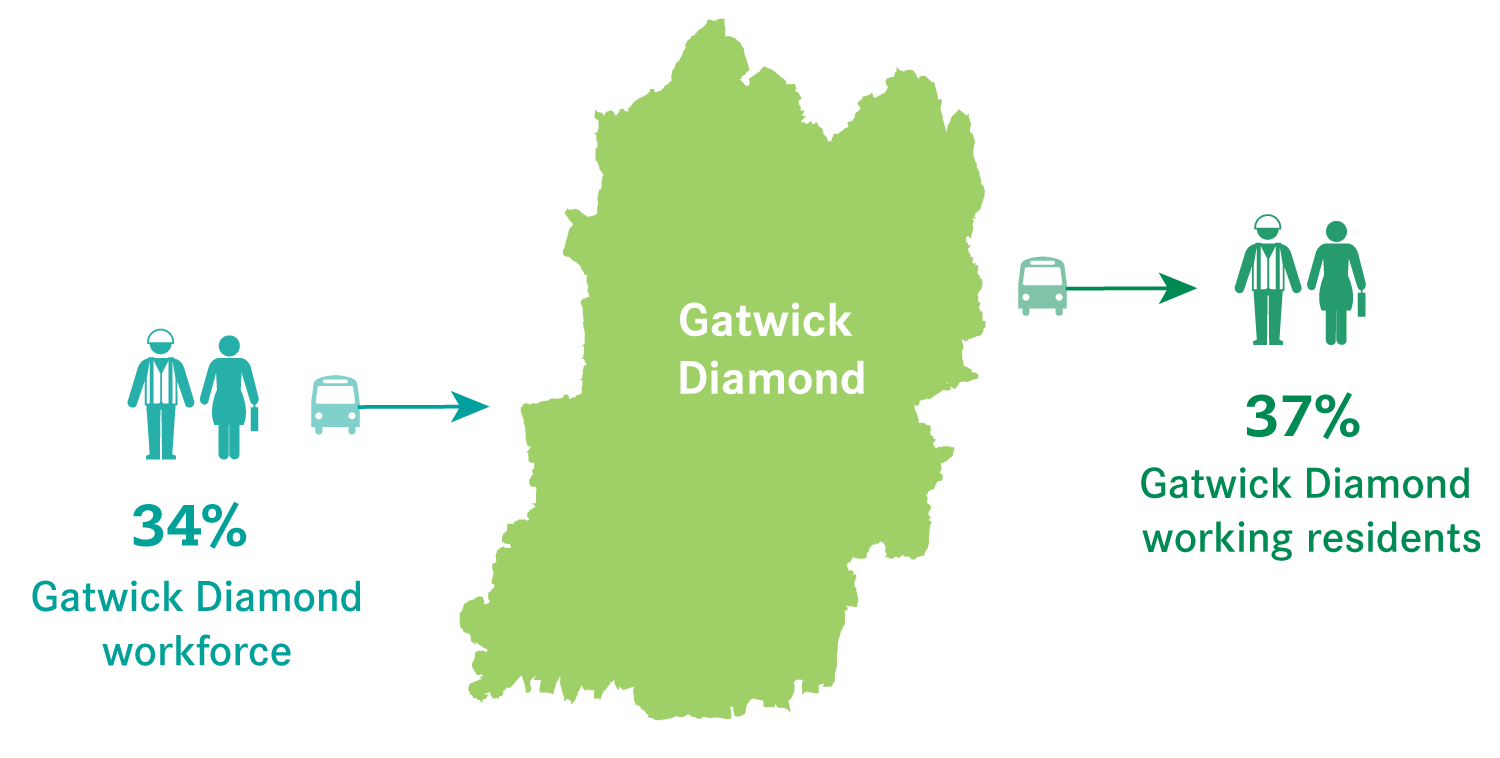 Commuting patterns for workers and residents

More than one in three workers come from outside the Gatwick Diamond. This makes the Gatwick Diamond the most reliant on an external workforce among all comparator areas. Enterprise M3 and the Thames Valley Berkshire experience similar levels of in-commuting, Greater Medway and the SEMLEP tend to be more self-contained, with 21 and 19 per cent of workers respectively living outside the respective areas.

As shown in Figure 18, the reach of the Gatwick Diamond is relatively limited. Those who commute in tend to live very close to the border, although it is interesting to note that a sizeable number of people commute from South London and Brighton, despite having access to a large number of local job opportunities. This is a positive for the area, likely reflecting the good job opportunities available within the Diamond.

The destination of those external commuters reflected the geography of jobs in the Gatwick Diamond, and underlines the importance of good transport links between these sites and areas outside of the Diamond. Manor Royal attracted the largest share of commuters (9 per cent of all Gatwick Diamond commuters), followed by the area covering the airport (7.4 per cent) and Leatherhead (7.2 per cent). The centre of Crawley had a much weaker pull, being the destination of 1.4 per cent of inward commuters. 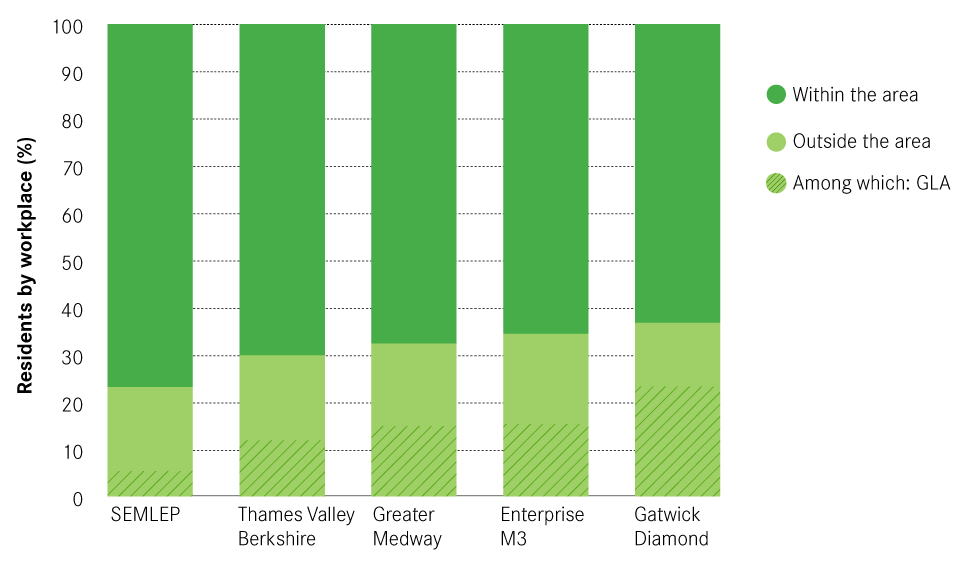 Figure 20: Destination of Gatwick Diamond residents outside the area 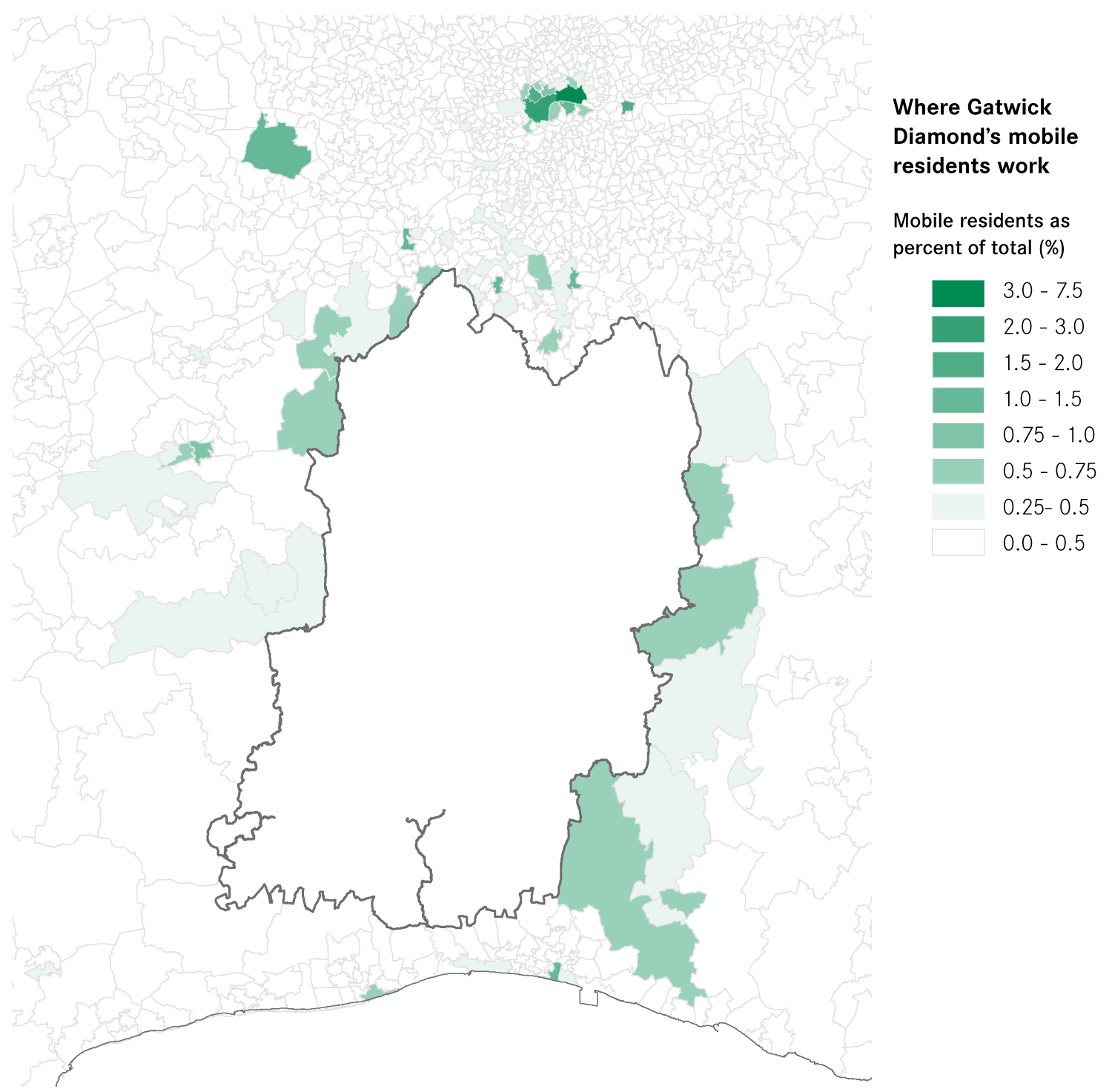 This meant that the pull of London on the Gatwick Diamond was much greater than for the other comparator areas. For instance only 15 per cent of the working residents of Greater Medway, and 12 per cent of the Thames Valley Berkshire LEP’s worked in London, despite these two areas also being close and well connected to the capital.

Occupations and pay of the Gatwick Diamond residents and workers

A large proportion of Gatwick Diamond’s residents occupy high-skilled positions.15 As shown in Figure 21, in 2015 they represented 52.2 per cent of all residents, above the British average of 44.5 per cent. This was slightly lower than the Thames Valley Berkshire and Enterprise M3, which respectively had 53.4 and 52.3 per cent of their population employed in high skilled jobs. 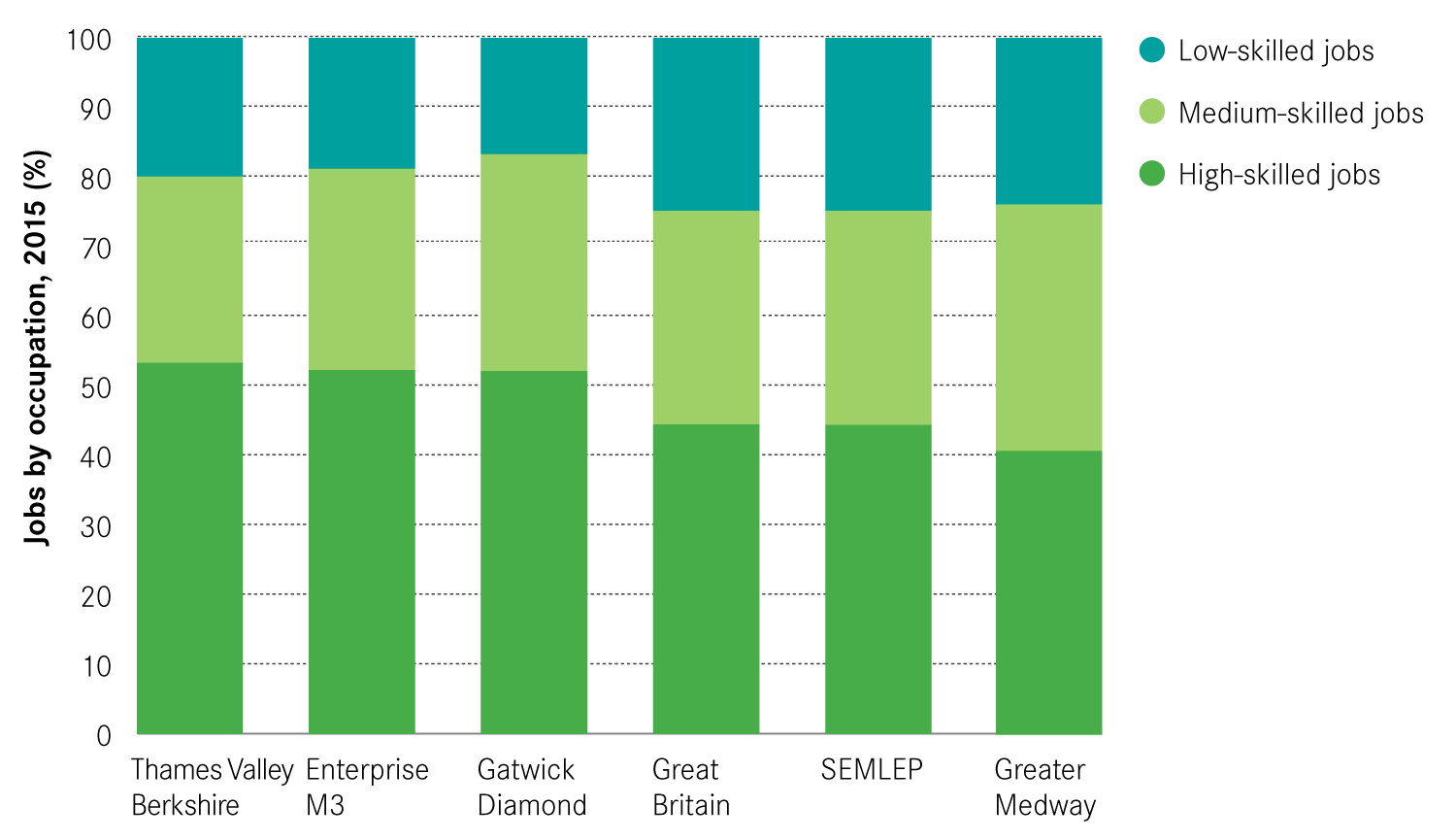 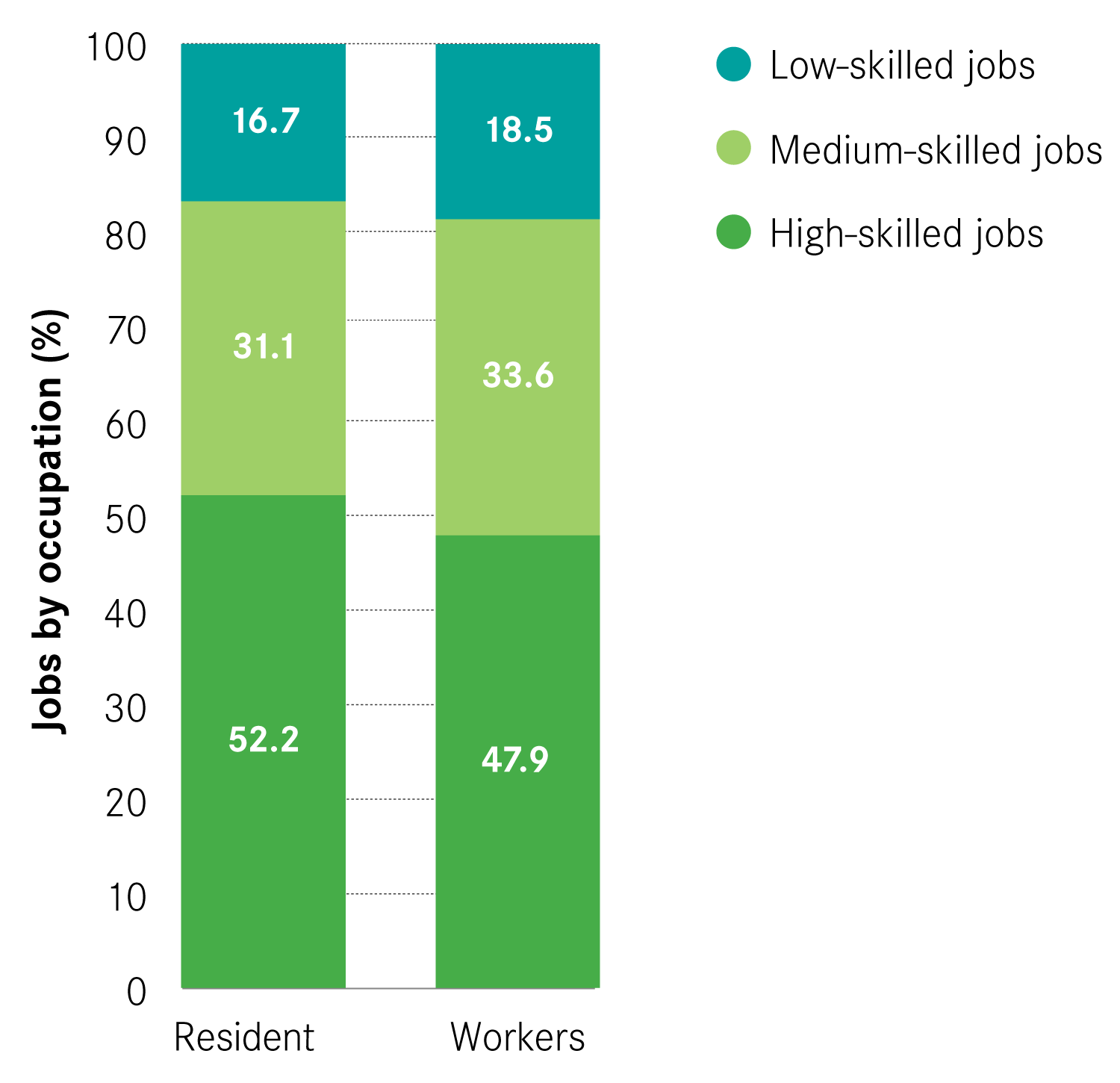 This difference is also reflected in wages. Within the Gatwick Diamond, resident wages were on average 8 per cent higher than workers’ (£619 against £572). But as Figure 23 shows, this was common across the comparator areas, with high wages in London likely to be driving up resident wages in neighbouring places.

These disparities have implications for housing

The relative cost of housing is likely to be a factor in the success of an area at attracting and retaining workers. The data shows that this is a key challenge for the Gatwick Diamond. 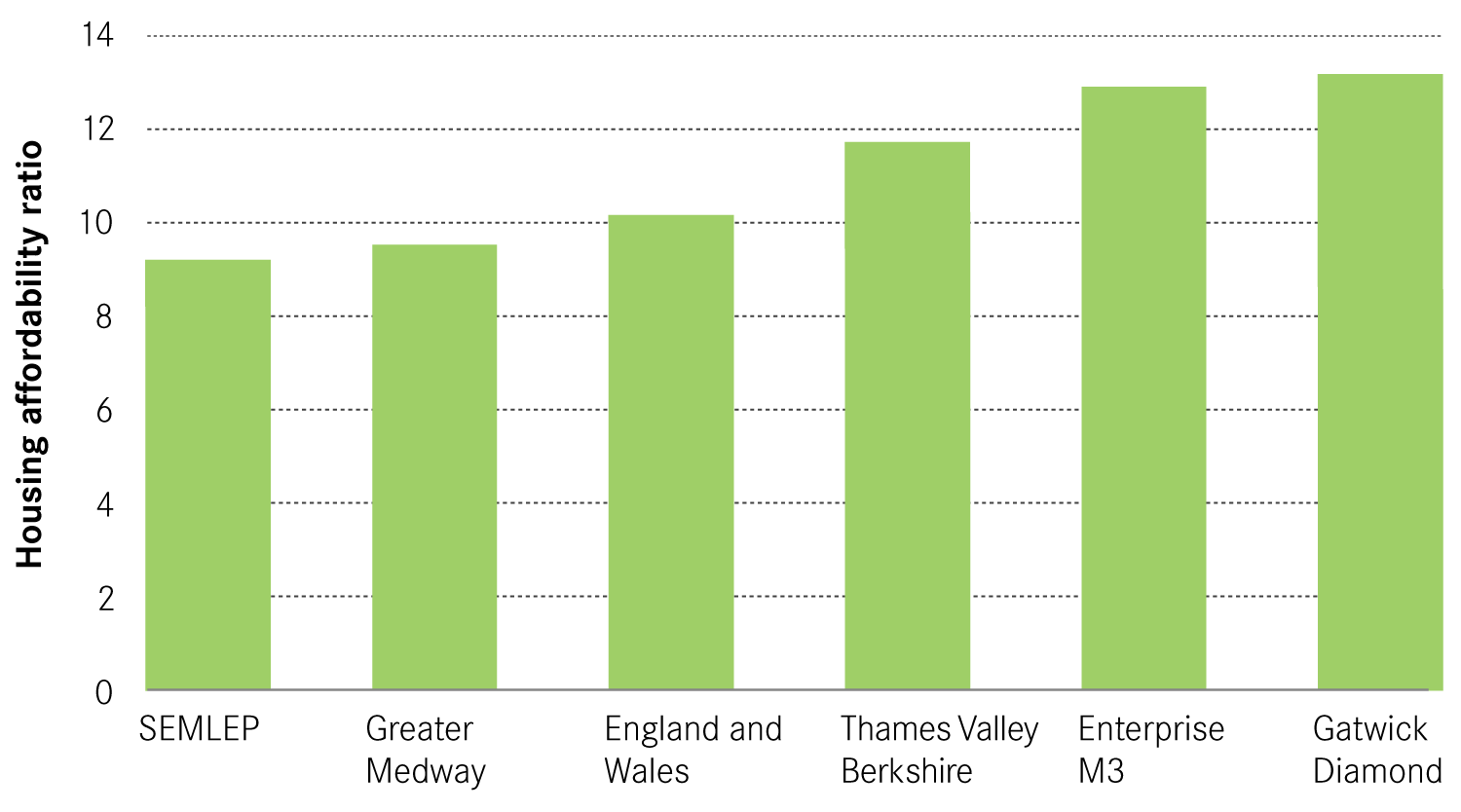 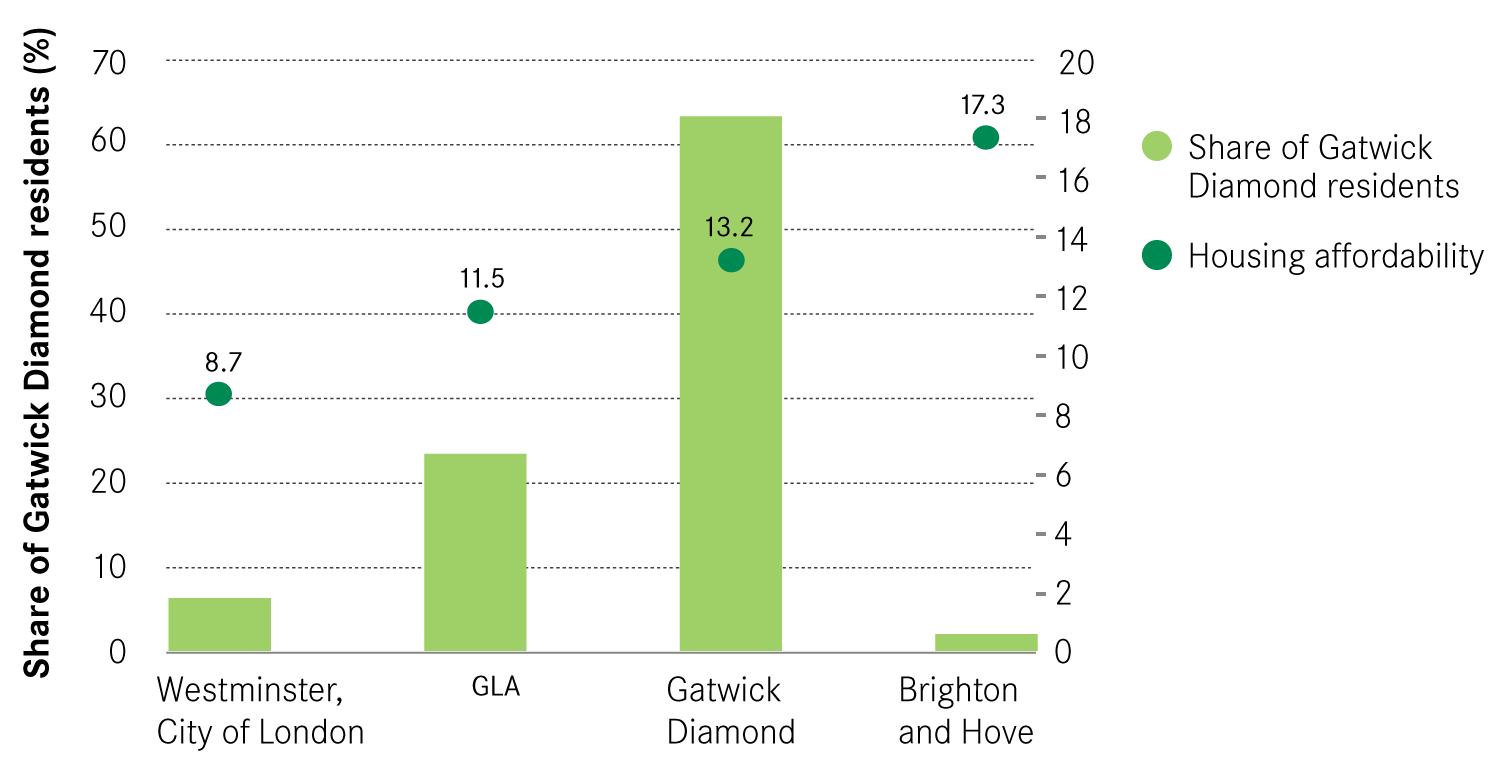 On the other hand, living in the Gatwick Diamond is considerably less affordable for those who work in Brighton and Hove, for whom the average house price is 17 times higher than the average annual salary.

These patterns suggest that the area is attracting young families from London as they look for more space, and commuting patterns suggest that a number of them are likely to continue to work in London. The relatively higher affordability of the area makes it an attractive choice for London workers to live. This provides a particular housing challenge. The Gatwick Diamond is relatively cheap for these people because of the wages they earn in London. But demand to live in the area pushes up housing costs for those who live and work there.

This demand is reflected in the varying nature of house prices across the Diamond. Figure 26 shows the cost of housing per square metre across the Gatwick Diamond, to take account of differing house sizes. It shows that the average house price per m2 was considerably higher in the north than in the south. In Epsom and Ewell and Mole Valley, the house price per m2 was above £5,000, and it was close to £4,600 in Reigate and Banstead. Tandridge followed with houses being sold at around £4,200 per m2, above Mid-Sussex and Horsham (about £4,000 per m2). Meanwhile Crawley had the lowest house price per m2, at £3,600. 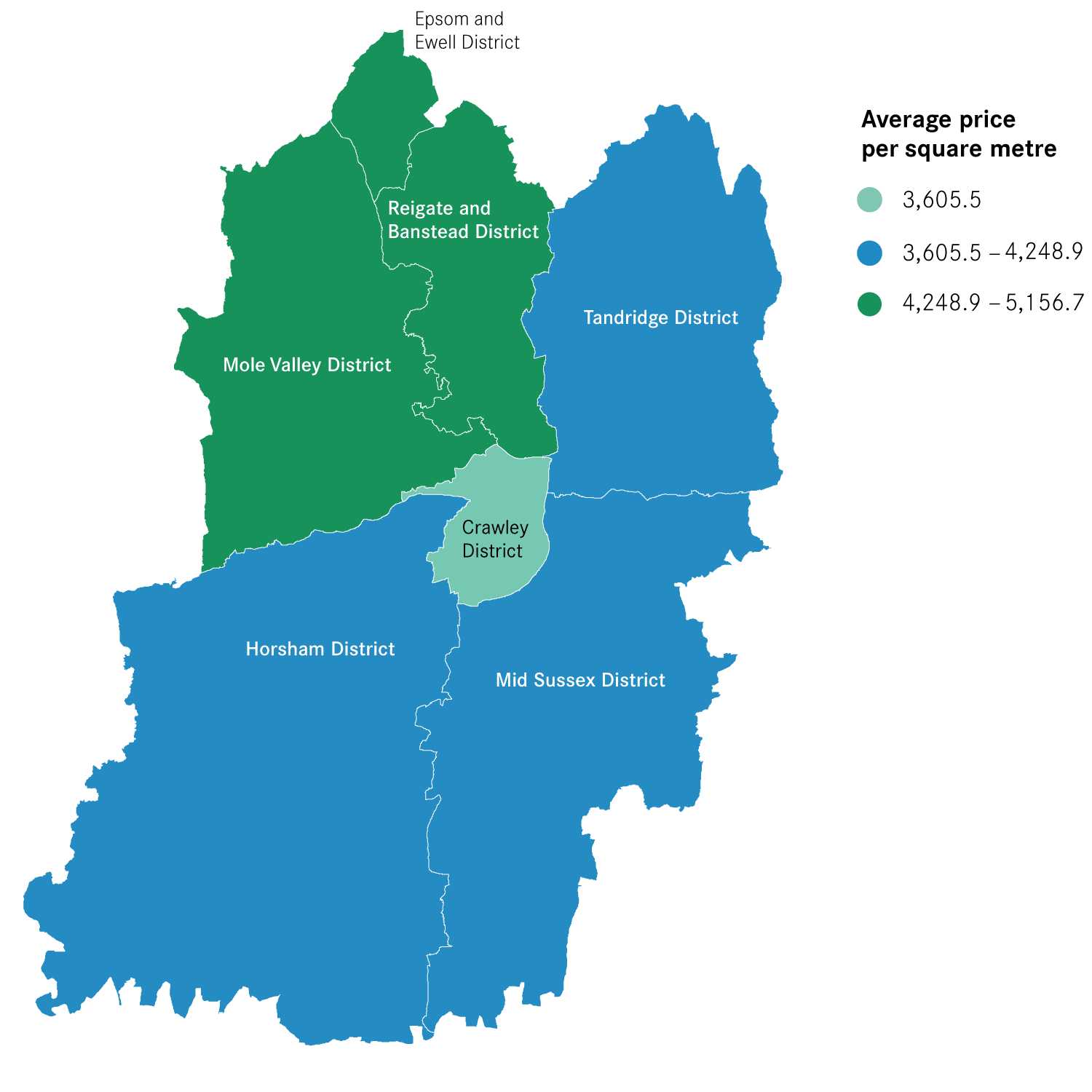 This poses a challenge to the Gatwick Diamond. Given both the economic strength of London and the acute nature of the capital’s housing crisis, the appeal of the Gatwick Diamond for London workers is likely to persist. In doing so this is likely to push up house prices in the area further, making it more unaffordable to those who work in the Diamond. Given that the supply of workers is an important factor in attracting and retaining businesses in the Diamond, failing to deal with the growing unaffordability of housing may make the area less attractive to business investment in the future, with implications for economic growth.

Competition for space – the role of Permitted Development Rights

As well as pushing up the cost of housing, high demand is also likely to create pressure to convert commercial space to residential space, something that has been made easier through the introduction of Permitted Development Rights (PDR).

Permitted Development Rights (PDR), which simplifies the process to convert commercial space into residential, appears to be causing particular pressures in the Gatwick Diamond.

PDR could act as a constraint on economic growth by reducing the number of commercial properties available to current or potential businesses, therefore increasing prices and restraining growth. This has become an issue in other high demand areas, and has led a number of authorities – particularly those in central London – to seek exemption from PDR.