02Transport essential for growth in cities

Good transport connections have direct benefits to people, businesses, the environment, and the overall economy. For example, good transport can:

Help people access jobs. Good transport links can widen people’s job-search area and help them find employment. It can also reduce commuting times and reduce the cost of living. Public transport is especially important for lower income groups, where 42 per cent lack access to a car or van (compared to only 8 per cent of those in the highest income group).6 And high-skilled workers are more likely to travel across longer distances to work, especially if they are following good job opportunities.7

Support innovation, productivity and economic growth in cities and the national economy. Transport can encourage firms to locate near one another, bring them closer to their supply chain and share expertise. The increase in concentration (mainly referred to as ‘agglomeration economies’) improves firms’ performance and increases productivity.8 A recent study in America found that doubling transport investment in cities raised productivity and increased wages between 1.1 and 1.8 per cent.9

Help shape greener and healthier places. Reducing the reliance on cars and promoting greener modes of transport (such as public transport or cycling) can relieve congestion and reduce carbon emissions. For example, London’s road emissions per person are the same as Brighton’s because of the efficient public transport network.10 Good transport can also improve individuals’ health and reduce healthcare costs. For example, if one in 10 journeys were made by bicycle, NHS could save £250 million per year.11 ONS also found that personal wellbeing of commuters is reduced as the time needed to commute to work rises.12

Help cities attract new firms. Good transport networks can reduce costs and improve access to skilled labour. Reducing business and freight road travel time by 5 per cent can save business up to £2.5 billion every year (0.2 per cent of GDP).13 Almost 60 per cent of UK firms consider transport infrastructure as a major influence on their business location.14 And a U.S study found that the quality of airport facilities is the most important factor determining where global firms want to set up their headquarters.15

Unlock new development sites for business and housing. In order for new houses or businesses to be built, roads, bus services and rail must be in place to service them. The expansion and investment in Birmingham’s New Street station is expected to drive a wider regeneration on the south side of the city as a part of the Big City Plan.16 The Cambridge City Deal focused on much-needed transport investment to help the city keep up with the needs of growing businesses.17

How do people use transport in cities?

In the UK almost half of commuters in cities live and work in different local authorities.18 This means that transport systems — road, buses, trams, rail and cycling routes — must link various combinations of routes across the city region.

Transport crosses boundaries. The maps below demonstrate that while most of the people across a city region commute into the city centre for work, a large number of workers also commute between other local authorities. For example, more than 230,000 people commute to Manchester from across the UK. These come mainly from neighbours like Oldham and Tameside, but can also come from cities further afield such as Blackpool and York. At the same time, thousands commute between the areas surrounding Manchester every day. Around 90 per cent of journeys to a job in Greater Manchester start from a home in Greater Manchester.19 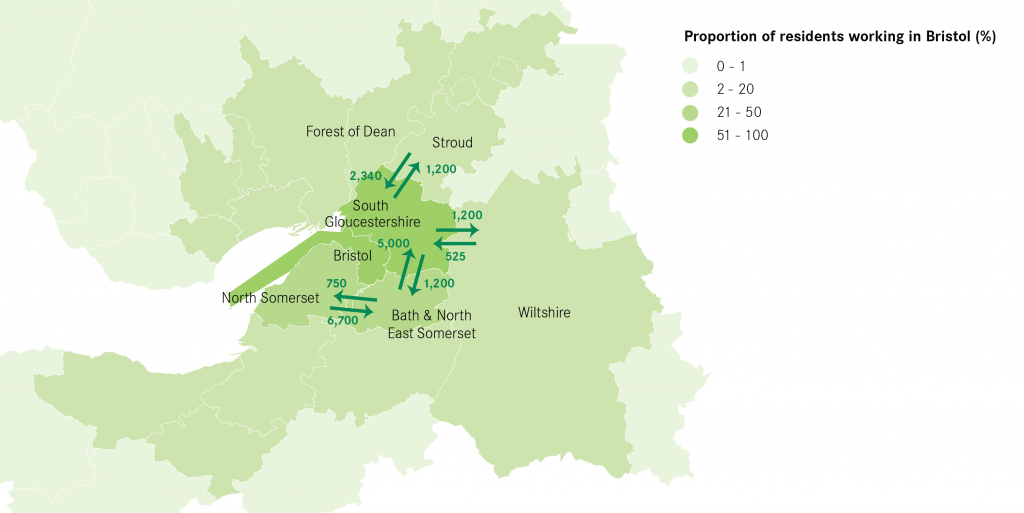 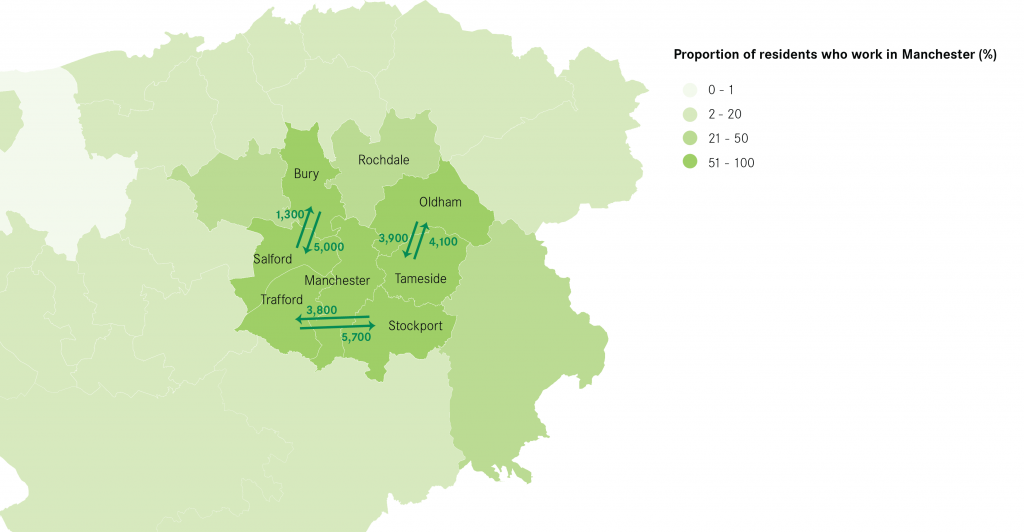 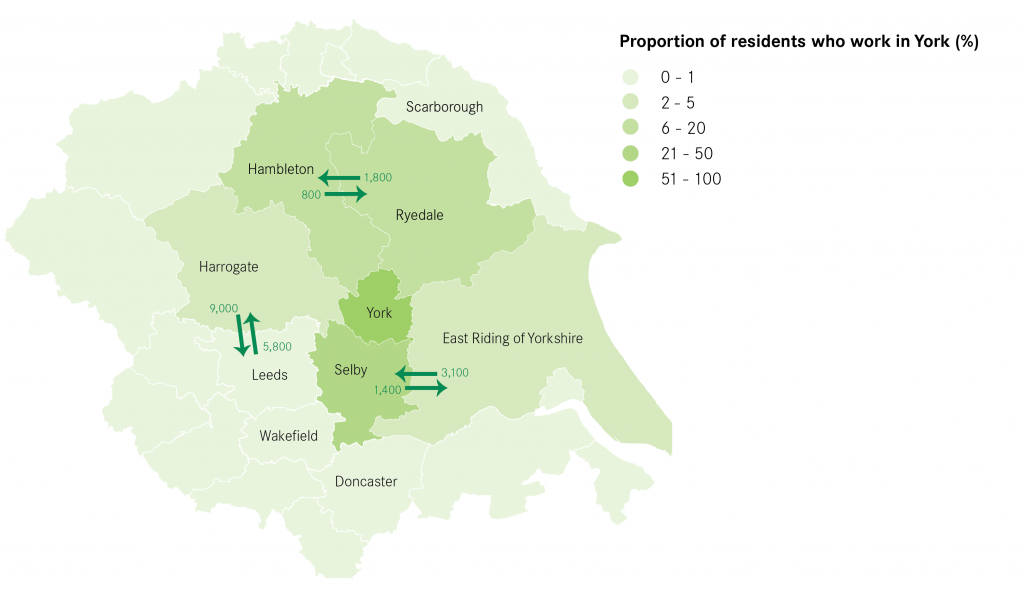 Transport is also multi-modal; people get around in many different ways. Cars still dominate for UK commuters, but cities bring together different modes of transport that need to seamlessly connect with one another. Figure 2 below shows the dominance of the car in commuting across the UK. But in the largest cities outside London, different types of transport such as bus, rail, walking and cycling are used to varying degrees. 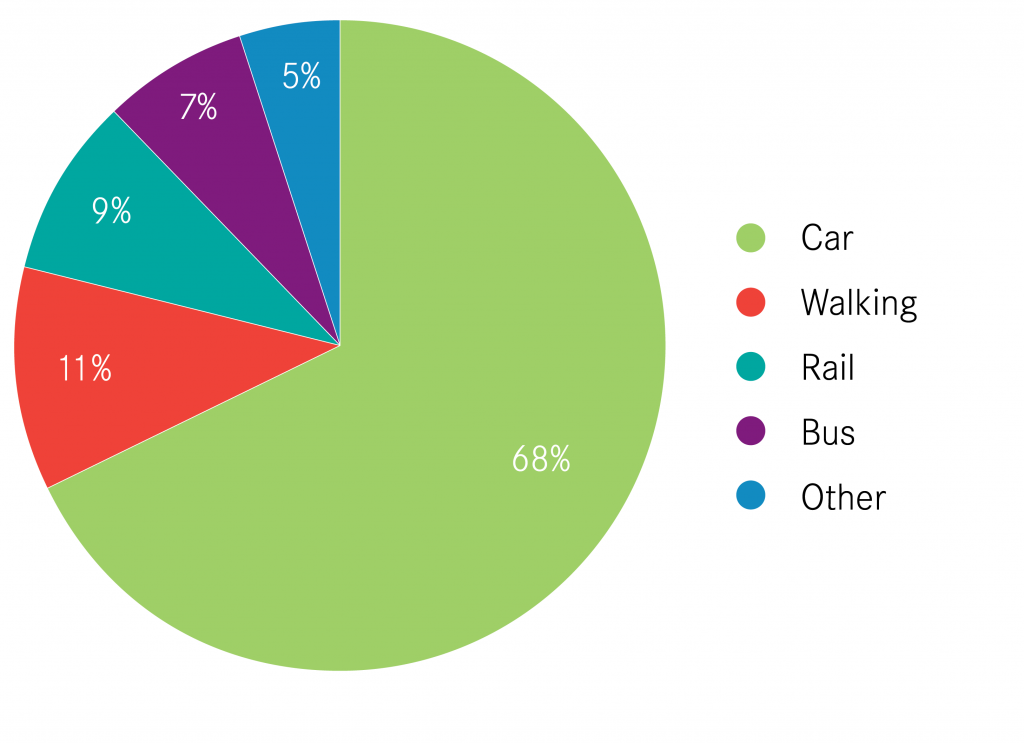 Who is responsible for making transport work for people and the economy?

Management of transport does not match how people use it. Most transport projects are managed by individual councils.20 However, a Travel to Work Area — the area over which most people commute — is often made up of many councils who do not necessarily work together. In larger cities like Birmingham and Liverpool, a cross-border group manages transport for the wider city region. But for cities within counties  like Cambridge and Cambridgeshire or Preston and Lancashire, the funding for buses or management of traffic is not coordinated between the city and surrounding areas. Add the complexity of national transport organisations such as the Highways Agency and Network Rail and the forthcoming transport responsibilities of LEPs, and the system is increasingly complex and difficult to manage and fund effectively.

Box 2: The emerging role of LEPs

Cities should actually see a boost in transport funding in 2015/16, but that money will not be channelled through local government as it has in the past. Instead, much of the capital funding for local transport projects will be routed through Local Enterprise Partnerships in a competitive bidding process. So certainty and control over investment is the major challenge for cities.21

One challenge for LEPs in their new role will be to develop an approach for prioritising investment, weighing transport against housing, schools and other major project for a wide area. Transport investment will also need to be linked to other policy areas in order to improve outcomes across all policy areas. This should encourage investors and government to think about the full investment package of transport within the economy rather than an individual transport project.

The LSE Growth Commission found “Successive policy initiatives have failed to put in place adequate structures to support the identification, planning, implementation and financing of infrastructure projects, particularly in transport and energy. Thus, the provision of infrastructure now constitutes a persistent and major policy failure, one that generations of governments from all parties have failed to address”.23 So the time it took London’s Crossrail project to secure funding means that by the time it is built, the extra capacity will be used up by London’s population growth.

Section 3 presents a roadmap for local government and Whitehall to deliver transport systems that work for people, cities and the economy.