05Five recommendations for Whitehall and cities

Transport underpins many of the drivers of economic growth in UK cities. But the system is not working. Underinvestment in transport in UK cities is damaging local and national competitiveness.

To address this, Whitehall needs to reform how transport is funded and coordinated from DfT and the Treasury with other departments, especially DCLG, BIS and the Department for Work and Pensions (DWP).

To reflect that places are different, Whitehall needs to put more power in the hands of city regions for developing transport plans, managing investment and raising funds.

Cities need to be more proactive in calling for greater control over their transport systems and flexing their existing powers to improve transport.

Ultimately, cities need to learn from one another to work around the system while calling for greater powers from government. Many cities are working around the challenges of the centralised transport system, and cities should share lessons learned and ways of working to support transport investment today.

Transport needs a ‘tailored devolution’ model. This would give all cities greater power over local transport issues, with the precise powers varying according to the transport system in place. This is outlined in Figure 4. 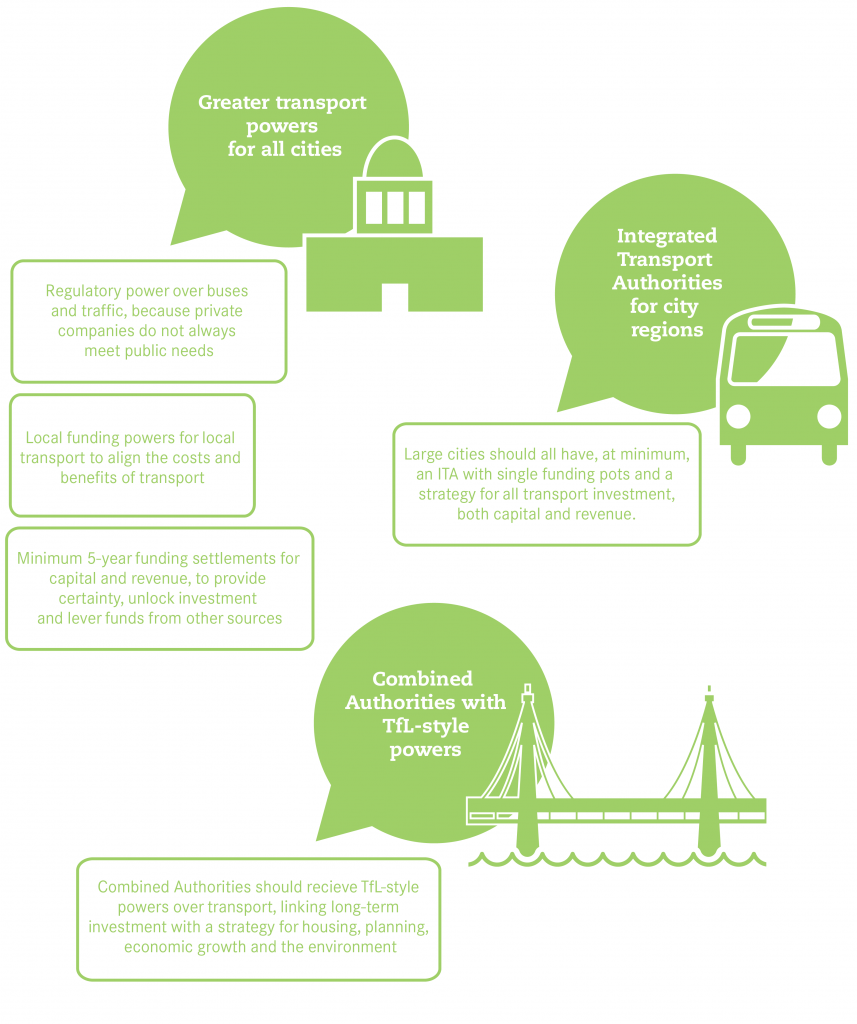 Recommendations for all cities

All cities should be given more powers over how they invest in and manage their transport systems.

Most important are buses and roads, the major forms of transport in cities. Cities need to regulate local transport systems in order to enable them to provide better services and meet the needs of the public. And new investment in transport should be unlocked with long-term funding settlements from government and more local funding sources for local transport programmes. In turn, this certainty can attract new investment into UK cities.

Larger city regions should be covered by an ITA that coordinates transport across the wider city region. In turn, ITAs should be empowered to drive investment and coordination over those local authorities.

ITAs already subsidize bus services for socially necessary travel, set fares and timetables of some local train and metro services (for example Merseytravel in the Liverpool City Region), plan and fund new public transport (such as light rail), and work with their local areas to produce local transport plans. But they are constrained in their ability to coordinate key elements of the local transport system, notably the service levels, quality and pricing of local bus services, as well as the investment decisions taken in their areas by major transport agencies including Network Rail and the Highways Agency. This needs to change and, once established, ITAs should be given the ability to effectively integrate transport across the city region, in a way similar to TfL.

4. ITAs in the UK’s larger city regions not already covered by combined authorities

Combined authorities now need TfL-style coordination powers to integrate transport into the wider economic strategy of the area. With control over the integrated transport system, combined authorities will be able to link transport to housing, employment and regeneration strategy, as well as areas such as the environment and health. This means cities with the platform to coordinate these areas can break through the silos of government to make sure that bus services are best organised to help more people get to work, shops and other destinations across city regions; and to ensure that infrastructure spending across road and rail systems best complements local regeneration, inward investment and housing priorities.

Following on from the work of the London Finance Commission, London should be given more powers to fund its transport systems. This means government loosening the reins on the GLA and London boroughs to allow them to develop new financing models, removing or reducing constraints on borrowing, greater devolved tax powers to support London investment for London transport and greater control over road congestion charging and fees.

Leading not waiting. While cities wait for government to enact these reforms, they should be taking action to make the most of the current transport system. This means city regions working together more and collaborating with LEPs on major investments from 2015/16.

The Independent Armitt Review of Infrastructure (led by former Olympic Delivery Authority chair Sir John Armitt) put forward national-level recommendations on how to improve the prioritisation and delivery of infrastructure that could be adapted for cities.

Using the Armitt Review city regions and LEPs should establish an advisory panel that will guide the long-term infrastructure investment strategy of the place. The role of the panel would be to: