The role of public assets in cities has changed from the Victorian heyday to today. Many of the grand buildings and town halls that dot the largest UK cities were built in the second half of the 19th century, the legacy of a period where local political leaders and wealthy industrialists invested heavily in the physical fabric of their cities. Since then, globalisation and technological change have caused the decline of the industries that previously supported public and private investments in the built environment of UK cities. And there has been a progressive shift over time of more policy and funding decisions being made at national, rather than local, level. This has changed the role of local government as a custodian of place and its ability to invest in and shape urban growth.

Nonetheless, local authorities remain the owners of a large portfolio of assets which include operational stock such as council office buildings, schools, housing and in some cases museums, leisure centres and libraries, as well as investment portfolios that vary in size and type from place to place. Recent estimates put the value of the local government estate at about £170 billion1 – or about 46 per cent of the total value of land and property owned by the public sector overall in 2012-13 – with the rest owned by a combination of central Government departments and national agencies, such as the Ministry of Defence, the NHS and Network Rail. While local authority estates and property teams have always maintained and managed these assets, since the recession there has been a significant shift in both how local government views publicly owned assets in the local economy, as well as the role of asset management within councils.

The combined impact of the economic downturn and local authority budget cuts has been a catalyst for places to make better use of public sector assets to support economic growth. In the first instance, the recession caused speculative property development in many cities to dry up, often requiring a more proactive role for local government in supporting physical development and regeneration. Meanwhile, shrinking local government budgets have created an incentive for all local authorities to both reduce costs and find new ways of generating revenue.

The response to these shifts has meant a greater focus on treating public assets more strategically at local level. Government policy in this area has tended to focus on disposal of publicly owned land and property, as well as reducing costs and improving the public service delivery through co-location. But the priorities for local authorities, and the opportunities that public assets present in terms of supporting local growth, are quite different.

Publicly owned land and property can be both a strategic as well as financial asset to local authorities. It can enable them to capitalise on existing assets to deliver more housing or employment space to support economic growth (or improve public service delivery), as well as providing a revenue funding stream in the context of reducing budgets. While disposal of land and property might remain the right response in some cases, strategies that include investing to refurbish old assets or acquire new ones in the right places are also appropriate responses for cities seeking to proactively support economic growth and regeneration, as well as generate revenues.

This report explores how different cities are shifting from a focus on asset management as a means of maintaining investment portfolios and reducing costs to a more strategic approach, in order to support local economic growth and financial returns. In-depth interviews were conducted with partners in cities across England and Wales to explore what approaches partners are taking to put publicly owned assets to work for the local economy. The partners interviewed were selected from cities that stand out as having taken a proactive and interesting approach to using the public asset base as a tool by which to support economic growth. This is by no means an exhaustive list: most, if not all, local authorities across the country have asset management investment strategies of some form.

The next section sets out how the role of public assets has changed in the context of austerity and reduced budgets.

Box 1: Who owns what? The challenge of mapping the public estate

The public estate is the body of land and property assets owned by different public sector bodies. It includes the central Government-owned estate – including port facilities and flood defences, the NHS estate,2 Defra rural estate and the defence military estate – as well as GP surgeries, schools, police and fire stations, the Crown Estate, land owned by other public sector organisations such as Network Rail and Transport for London, and the land and property owned by local authorities.

Currently there is no single comprehensive way of mapping the entire public estate. This restricts the ability to take a strategic approach to how land and buildings are managed and to optimising the value of the combined public estate in a place, rather than acting on a site by site approach.

Most individual local authorities use mapping software to map their own assets and some places have improved the availability of data and information about locally land and property assets through Government programs such as Capital Asset Pathfinders and the One Public Estate programs. But anecdotal evidence from the interviews suggests that there is significant variation in quality and use of mapping data across different local authorities.

The Government’s e-Pims register seeks to improve the availability of data at the national level by providing information on assets owned by government departments and their sponsored bodies which fall under the responsibility of English Ministers, as well as on a voluntary basis by NHS Trusts and Welsh Government. For example, the map below shows the sites that are surplus to requirements and have been made available on the Register of Surplus Public Sector Land across the country – about 40 per cent of these sites are in British cities.3

This is a positive step towards providing information that can support a more strategic approach to managing public assets. However, few local authorities and non-departmental organisations include their data on the register, which provides only information on the size and location of the asset rather than market value or an indication of the ‘size of the prize’ in terms of the contribution to the local economy. This means that there is a lack of comprehensive cross-public sector mapping which would provide an accurate picture of the public estate (both locally and nationally owned) in different places. 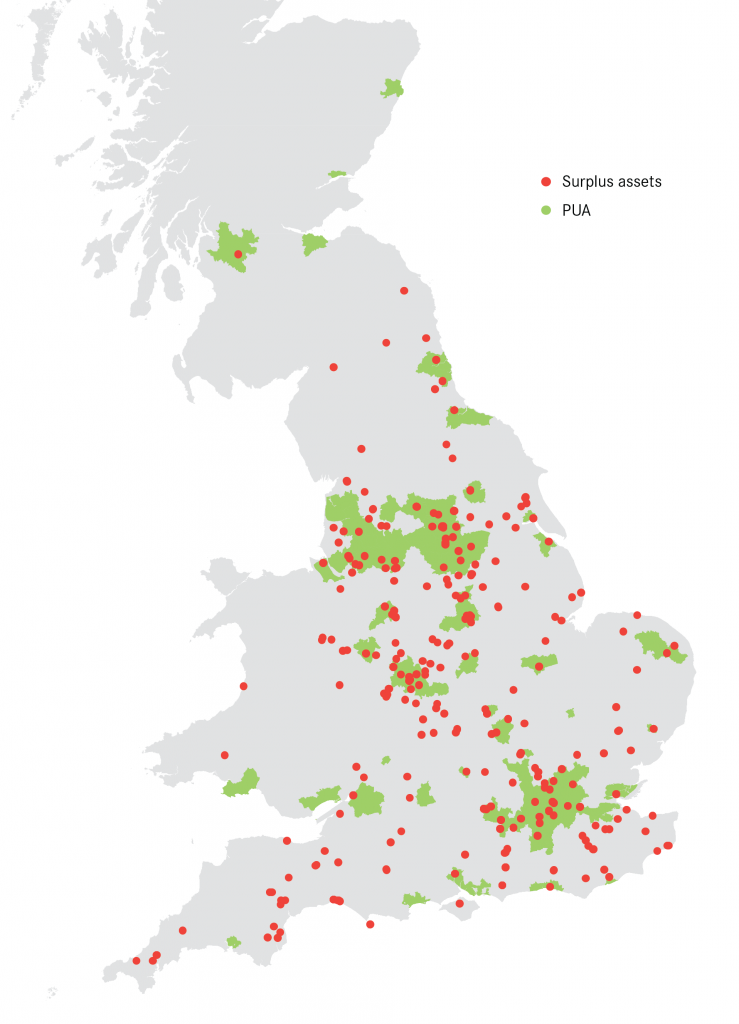