The public sector asset base looks different across the country

The nature and value of assets vary according to the historical legacy of assets held by different bodies and in different places. Some local authorities own more than others, while in some cities there is a more significant presence of nationally held assets than others, such as Ministry of Defence land in Portsmouth for example, or a large NHS health estate in Leeds. And within what is owned by local government, the mix and type of assets varies from place to place, between commercial and residential property, and in some cases even agricultural land.

Within this context, it is important to remember that publicly owned land and buildings can be both assets and liabilities, depending on their location and value to the local economy. Commercial property on brownfield sites that require decontamination will not hold the same value as high value office space in a city centre, for example. In turn, this means that the value of public assets and the contribution they can make to supporting economic growth also vary between places. Different types of assets can be thought of as:

Property markets, as well as the governance, capacity and financial situations of local government, vary greatly between localities. This sets the context in which public assets can be capitalised on to support local priorities and shape the strategy for managing public assets to support growth and generate revenues. Local authority-owned housing stock in cities with thriving residential markets such as London and Oxford might be an asset to the local authority, while publicly-owned empty houses in less desirable areas of Liverpool are being sold for £1 because the cost of refurbishing them outweighs their market value, for example.

However, there are commonalities in the processes that take place within local authorities. Asset management continues to involve a combination of the following:

The recession and budgets cuts have been a catalyst for change

Weakened property markets and the pressure of budget cuts in most UK cities have been a catalyst for local partners to make better use of public sector assets than before.4

The economic downturn created a need for a more proactive approach from local government in the way it intervened to support and drive economic growth. The recession badly affected already marginal property markets, with projects interrupted or abandoned and stalled building sites a common sight in UK cities. The nature of the impact on the economy in different cities shapes the approaches that cities are taking:

The Government’s approach to managing the deficit has also significantly changed the local government funding landscape. Grants from central government to local government (excluding specific housing, education and fire and rescue funds) have been cut by over a third between 2009-10 and 2014-155 and this has contributed to a change in how local government public land and property assets are viewed by local government. And taken altogether, these factors create a different set of priorities for local government.

Within this context, national policy has focused on shrinking the size of the public estate in order to create savings. The Chancellor has pledged to make £6 billion efficiency savings by 2020 through asset rationalisation, for example.6 Meanwhile, policies such as the Capital Asset Pathfinder and One Public Estate have also been introduced to encourage land and property asset ‘savings’ at local level – see page 28 for more information. The Government has also identified disposing of public assets as a means of delivering more land for housing.

Local government faces a different set of priorities to central Government in how it maximises the value of public assets. Beyond short-term cost reduction, the question for local areas is about how to move public sector assets into more productive use, capitalising on the value of a publicly owned plot of land or building as both a strategic and a revenue generating asset.

The distinction between revenue and capital in local government funding drives the growing need to create a longer term financial return from assets. UK accounting convention states that revenue costs incurred by local authorities – which include staff salaries, day to day running costs and bills – can only be funded from specific revenue resources. Capital funding, which includes the revenues generated by the sale of assets, for instance, can only be used for capital expenditures, such as infrastructure investment. In other words, selling off a piece of land or a building can reduce outgoings as well as generate a capital receipt in the short-term but it cannot support local authorities’ day to day expenditures.7 The availability of capital funding is not a challenge per se for localities, with money available to borrow at low rates from the Public Works Loan Board.8 More problematic is the ability to repay and continue to deliver public services in an era of diminishing budgets.4

The move towards thinking about assets as financial assets reflects the need to generate additional sources of revenue funding in an era where revenue budgets to fund local public services are shrinking. Reduced budgets have created financial pressures for local partners to reduce expenditure as well as find new ways of funding public services and day to day spending. Rental incomes can provide a source of revenue funding to support public service delivery and local authority funding in the longer term. This might actually require an upfront investment (and additional cost), such as to refurbish or renovate an office building in order to generate higher revenues from rental income from leasing out employment space.

Many partners are taking this more active approach to creating secure revenue streams to support council funding in the long-term from public assets. Leeds wants to make the most of its large investment portfolio, and the city council is working on getting rid of its older office stock and acquiring new buildings, which are more cost-efficient and generate better incomes, with the aim of transforming the portfolio to generate higher revenues and reduce running costs. In Bournemouth, partners are using prudential borrowing to acquire new investment properties to develop a more formal income stream approach. In Camden, meanwhile, the council is exploring developing housing for private rent, which will deliver a revenue income stream.

Eastleigh Borough Council, near Southampton, stands out as having taken this investment and revenue driven approach to public sector assets for a long time. Taking advantage of the low property value and low interest rates, Eastleigh Borough Council initiated an asset acquisition strategy in 2011 to support city centre regeneration and create jobs. By identifying assets that could generate the best economic and financial benefits, and acting very proactively in the market, Eastleigh built up a commercial portfolio yielding over £2.5 million a year in income, which more than covers borrowing costs.4 Partners are keen to stress that this successful strategy has been possible thanks to a shift towards a more commercial culture within the council. Such strategy obviously bears more risks, which is why it requires commercial awareness and skills, and strong and stable political support.

Local authorities are funded through a combination of grants from central government, redistributed income from business rates and the income from the council tax collected in their area. 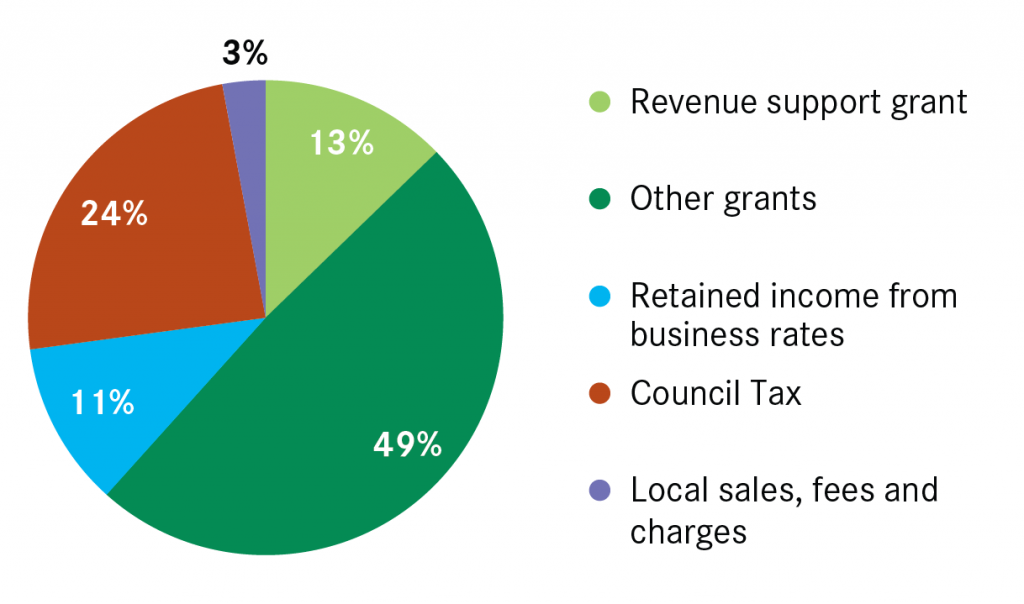 The next section draws out the approaches to asset management and investment that cities across the country are taking, driven by sets of varying motivations and underlying economic conditions, before drawing out common challenges and tensions that partners across cities interviewed face.