How does the current system work?

Apprenticeships are a devolved function and operate separately in England, Scotland, Northern Ireland and Wales. Frameworks are developed and funding allocated by the relevant national coordinating body (the Skills Funding Agency in England; Skills Development Scotland; the Welsh Government and the Department for Education and Learning in Northern Ireland).

Across the UK, apprentices sign a contract with their employer and in-work training is usually supported by training providers and colleges. The requirements of an apprenticeship are set out in an apprenticeship framework (in England there are nearly 300) and lead towards a recognised NVQ qualification, a technical certificate and additional skills including English, Maths and IT.

Apprenticeships are offered at three levels – Intermediate (equivalent to five GCSE passes), Advanced (equivalent to two A level passes) and Higher (which can lead to NVQ Level 4 and above, or a foundation degree). The frameworks designate both the level and the subject of the apprenticeship undertaken.

The funding for training is paid to employers by the national coordinating body via the training provider. In England, additional funding support is available for the employer in the form of the Apprenticeship Grant for Employers.

How has apprenticeship policy changed over the last two decades?

Over the last two decades, policies have been invented and reinvented, with reforms barely completed before the system is changed again, increasing risk and confusion for employers, training providers, schools and young people. 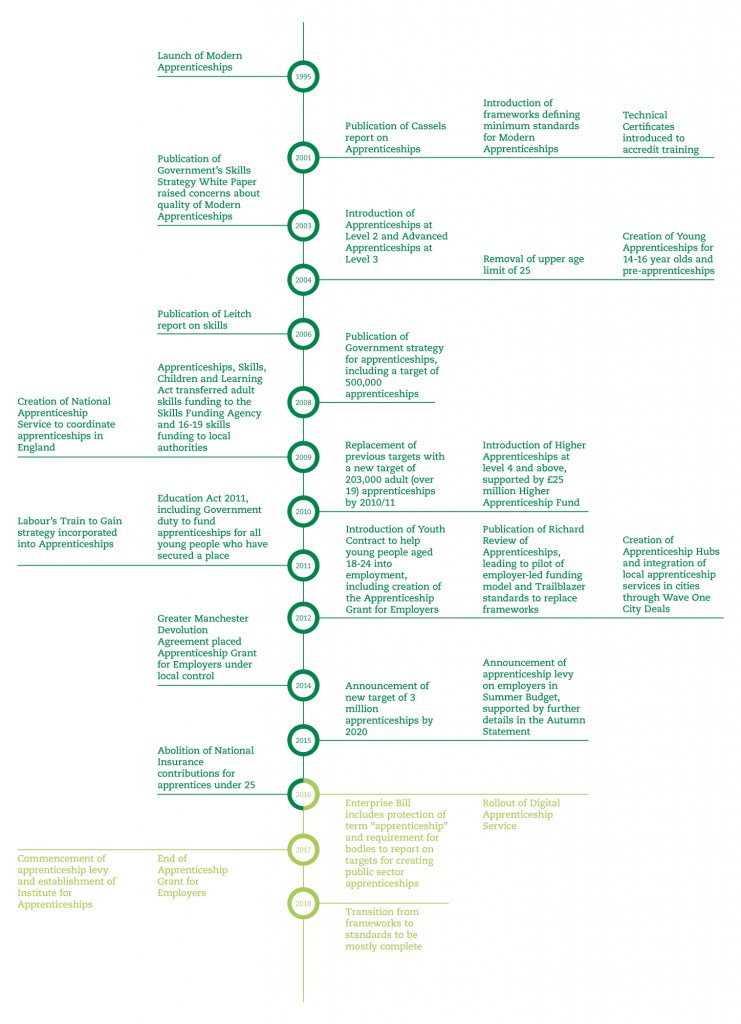 What will the big changes to policy be, and what does it mean?

As Figure 2 illustrates, a series of changes to the national apprenticeship system have been announced over the past two years, and are set to roll out from spring 2016 with the apprenticeship levy coming into force in April 2017.10 But what do these changes mean for apprenticeships, and for the local partners involved in delivering them?

The Apprenticeship Levy was announced in the 2015 summer budget following the recommendations of the Wolf Review which called for a levy on employers to fund the apprenticeship system.13

The levy, which is a hypothecated tax on employers, will come into force in April 2017 and will amount to 0.5 per cent of the wage bill for any employer with a paybill of over £3 million (2 per cent of UK employers). It is set to raise over £3 billion a year by 2019-20.

Employers will have 24 months to spend their contributions on training and assessment, which will be managed in the form of online vouchers through the new Digital Apprenticeship Service. For every £1 spent on training, £2 will be contributed by the Government. For employers who contribute to the levy, their digital accounts will be topped up by a further 10 per cent, meaning that they receive more than they put in, as long as it is spent on training. For smaller employers who have not paid the levy, the employer contribution will need to be made upfront.

While the changes outlined in the previous section will address many of the weaknesses of the current system, some will remain and risk undermining the impact of changes to apprenticeship policy if they are not addressed. These include:

For cities and their partners, the government’s focus on quantity, often at the expense of quality, increases the challenges associated with trying to design and deliver an effective apprenticeships programme that meets the needs of the local economy, employers and apprentices.

Part 2 explores some of these day-to-day challenges in delivery faced locally and draws out a number of lessons from these initiatives which can help cities to support the creation of apprenticeships that work for their place.