City leaders across the UK and internationally are increasingly asking: How can my city reduce its carbon footprint and make it work for the wider economic growth strategy?
This paper responds to this question by highlighting pragmatic, practical and proven ways that cities in the UK and elsewhere are tackling their environmental and economic challenges.

What is the low carbon economy?

This report uses a broad definition of the ‘low carbon economy’. It includes not only the new activities and value created by low carbon focused businesses e.g. insulation-fitters, but also the jobs and savings that existing businesses benefit from in reducing carbon emissions. This approach also includes the wider impacts of a low carbon economy beyond the narrower Department of Business, Innovation & Skills’s (BIS) LCEGS1 definition which is confined to “environmentally and low carbon-focused activities in the economy”.

It’s important to recognise that there are limits to the new jobs created. Many programmes and projects that have a large and positive impact on the environment, such as wind farms, employ very few people, especially locally. Reflecting this, the report is less concerned with the number of additional green jobs created, instead focusing on the transferable lessons of different cities’ experience in implementing low carbon measures that support local economic growth.

Globally, larger cities account for 70 per cent of the world’s CO2 emissions.2 In the UK, whilst the 64 largest cities accounted for 45 per cent of emissions in 2010, they also lead the way on efficiency, with emissions 17 per cent lower per capita in UK cities than the rest of the country.3 It is clear that cities have a central role, but with national policy driving the agenda, it is sometimes difficult for cities to see exactly what this role is.

Unsurprisingly, given its highly centralised government structure, much of the activity on reducing carbon emissions in the UK has been driven by national Government. The 2008 Climate Change Act set CO2 emission reduction targets for the country and established the Department for Energy and Climate Change (DECC) to oversee the delivery of these targets.

The Government’s flagship low carbon initiative is the Green Deal. Launched in January 2013, it aims to encourage households and businesses to install energy efficient measures in their properties by offering loans to be repaid over a number of years. Under the scheme, customers can install loft insulation, new boilers, or other measures without paying an upfront cost. By 2030, the government aims to retrofit 26 million homes and 2.8 million commercial properties through the scheme estimated to create 65,000 construction jobs.

To date, take-up has been slow. As of September 2013 only 954 of the 85,177 households assessed had signed up for the deal according to DECC figures. This might be due to the high interest rate (6.96 per cent) and long pay off periods on Green Deal loans, while other reasons for slow take-up include high upfront cost of improvements, a delay in setting up the funding mechanism and uncertainty about the benefits or quality of work done through the scheme. The Green Deal has been most effective when implemented locally, as shown in Bristol (see final chapter).

Nationally, the Government has legislated for a target of reducing CO2 emissions by 34 per cent by 2020 and 80 per cent by 2050 from 1990 emissions levels. Achieving this will require cities to play an important role in supporting this aim through the policies, programmes and infrastructure they manage. However, the introduction of the Localism Act in 2011 removed the Local Area Agreements that many authorities had used to structure their responses to meeting these national targets. There is now no official legal requirement for local areas to reduce their emissions or meet any specific targets.4 Although National Indicator 1885 goes some way to help local authorities identify the risks and opportunities associated with climate change.

In addition to the removal of a local mandate, they also face financial, governance and legislative restrictions that limit the scale and scope of their actions to reduce carbon emissions. For example, the Localism Act (2011) also gave local government the power to do anything a citizen could do (through the General Power of Competence), but councils still face constraints on their ability to make use of this power. For example, local authorities face limits on the amount they can borrow to invest in their housing stock, limiting their ability to retrofit housing. In addition much of the institutional economic development landscape has changed dramatically over the last three years. New policies including City Deals, Enterprise Zones and the Regional Growth Fund are now in place alongside Local Enterprise Partnerships.

These policy and institutional changes have increased the level of uncertainty in many cities which challenges their ability to undertake longer term decisionmaking. And the current state of local government finances – with central government funding set to fall by almost 20 per cent from 2010/11 to 2014/15 – means these challenges are likely to increase over the next decade.

Leading not waiting: the increasing role of cities in reducing CO2 emissions

Despite lacking a clear mandate and operating in difficult financial and policy contexts, many cities in the UK are pursuing low carbon growth strategies.

Some are pursuing jobs growth in low carbon sectors such as green manufacturing, renewable energy, and green R&D, often through the City Deals process. Others are working with business and community leaders to reduce energy demand and consumption to make buildings more energy efficient, to moderate car dependence and to shift towards low carbon energy production.

And many are finding that low carbon policies and programmes can provide a positive return on investment while also providing additional environmental and social returns. For example, by retrofitting their own buildings and saving money, local authorities can act as a leading example to the community.

Cities are also acting on the guidance from Committee on Climate Change that states that “Local authorities should draw up low-carbon plans which focus on drivers of emissions over which they have influence (e.g. number of homes insulated, car miles travelled).”6 Barnsley, Birmingham, Leeds, Manchester, Nottingham, and York have commissioned mini-Stern reviews to map out a strategy for reducing CO2 in their city. Through building accurate city level information, cities are tailoring national policy to develop local responses to target their chief sources of carbon emissions.

‘Smart cities” and “smart technologies’ are tools that can help local government achieve better outcomes more efficiently or to support business and the environment in new ways. But technology is a means to an end, the information gathered can assist monitoring and identification of challenges but is not itself the solution. Smart energy metering, for example, can help enforce building regulations and feed in to financial models for energy savings and retrofit but it needs to be used practically with the appropriate changes made.

Figure 1: Levels of CO2 emissions by source in the UK 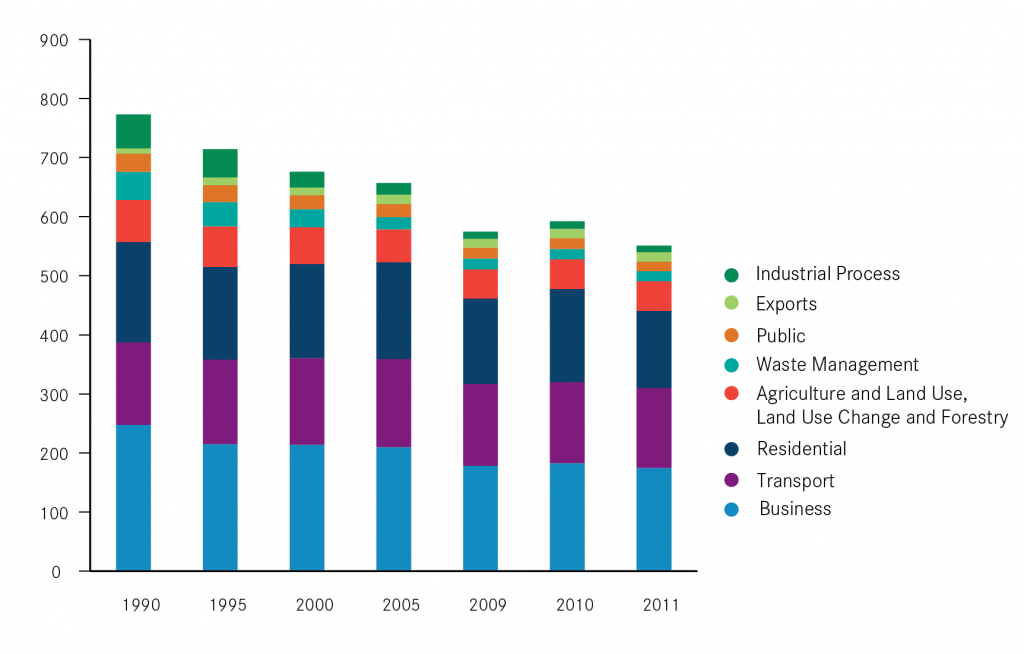 Purpose of this report

To highlight what is possible, this report sets out a framework for understanding the roles that cities can play in reducing CO2 emissions. The framework is used to organise case studies which demonstrate that reducing CO2 emissions in a city can also create jobs and support the business environment. Whilst no one case study has all the answers, collectively they show the range of different and complementary approaches that cities can use in supporting low carbon economic growth.

The framework of interventions for cities is outlined first. Each role is then taken in turn, highlighting one case study, another lesson, and a case that is “one to watch”— newly developing policies or programmes that offer lessons for cities but are not yet proven to have worked. The importance of tying each of the five roles together is highlighted in the case study of Bristol, the 2015 European Green Capital.

Each of the examples in the report highlight the critical importance of strong leadership, comprehensive and accurate information and strong, extensive city networks in moving towards a low carbon economy.