02How can cities drive change?

Strong local leadership — from local government, community groups and businesses — is a pre-requisite for policies and programmes that deliver change.

Without strong local leadership, the vision and strategy that acts as a blueprint for achieving low carbon change is neither created nor executed. For example, organisations across Bristol have stressed that the commitment of Mayor Ferguson toward supporting green businesses, reducing CO2 emissions, and creating a greener way of life for the city has helped make local projects (many of which started before his tenure) successful.

However, as important as it is, political leadership on its own will not drive change. Ultimately, it is not the development of a carbon emissions reduction strategy that drives down CO2 in cities, but rather that the strategy is a reflection of local desires and actions to reduce emissions.7 One of the reasons that cities such as Manchester and Brighton have moved to the forefront of the low carbon movement is because the political leadership reflects the wider community’s values and actions; they want a greener city and elect leaders that reflect their desires.7

Given the economic, political and environmental context laid out in Section 1, the ability for cities in the UK to support ‘green growth’ is constrained by their financial and legal powers. In practice, it is also limited by capacity issues, for example some cities’ environment departments have sole responsibility for action on ‘low carbon issues’ and most have stretched and declining resources. Despite these challenges the cities that are succeeding in making low carbon changes work for their local economy are approaching the challenges from different but complementary angles.

There are five roles that cities can use to support the move towards a low carbon economy: supporter of businesses, regulator, incentiviser, consumer and financier (Figure 3). In each of the roles set out, cities need to identify the tools they already have at their disposal and the new ones they will need to acquire.

Figure 2: The roles for local government in supporting jobs through greener cities 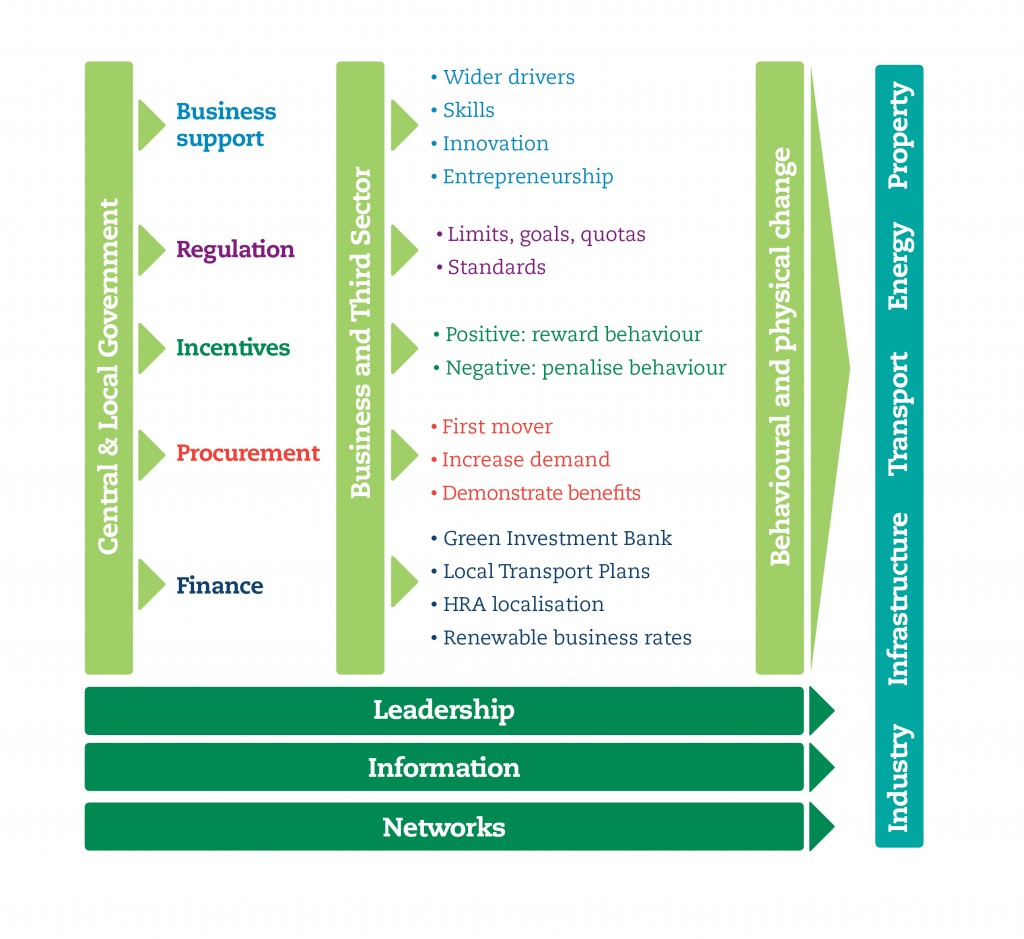 Supporting business: One of the best ways cities can support low carbon activities to grow is to ensure the wider skills, innovation, infrastructure, and entrepreneurial support for businesses is effectively provided. That means cutting red tape, ensuring policy certainty, and providing education and training programmes that reflect the needs of the business community.

Regulator: Cities have the power to set local rules that are enforceable and require behaviour change. In the UK, local government can use planning and transport regulations as well as set energy standards to reduce emissions. But the opportunities to use this type of intervention are limited by their lack of powers compared with cities internationally.

Incentiviser: Incentives can be a low cost and flexible way of changing behaviour. Cities can both take forward incentives provided by national government (such as Green Deals or Recycling Reward schemes) and implement their own incentives (such as Carbon Challenges).

Financier: Cities can create a positive investment environment by increasing the certainty of projects, and be a longterm guarantor for finance. For example, councils can develop and support the use of certain financial instruments — such as co-investment models — that leverage local money (borrowed at lower than market rates) with private partners’ finance and expertise to yield financial, social and environmental benefits.

These five interventions offer approaches that are applicable across cities and not just in the council’s environmental or economic development teams. Leaders in business, housing, transport, education, environment, and health have important contributions and roles to play in driving low carbon initiatives.

Each of these five roles is discussed in turn, using examples of how cities have used interventions to improve the outcomes, environment and the economy of the city.