04City case studies: where are the opportunities for new homes?

The UK’s most successful cities vary in the land that they have available for development and the location of this land. This section looks in detail at the capacity of five illustrative city examples, showing the different opportunities they have for homes in the places they are needed.

For the analysis, we take 60 per cent of land developed at suburban densities to give an illustrative figure, although in practice, a case by case approach means that this would vary in different places. This is not a recommendation to build on 60 per cent of this land or at this density; rather, analysis shows the potential number of homes on well-connected sites that could be evaluated. Bringing more of this land forward would reduce land costs by increasing choice and competition. 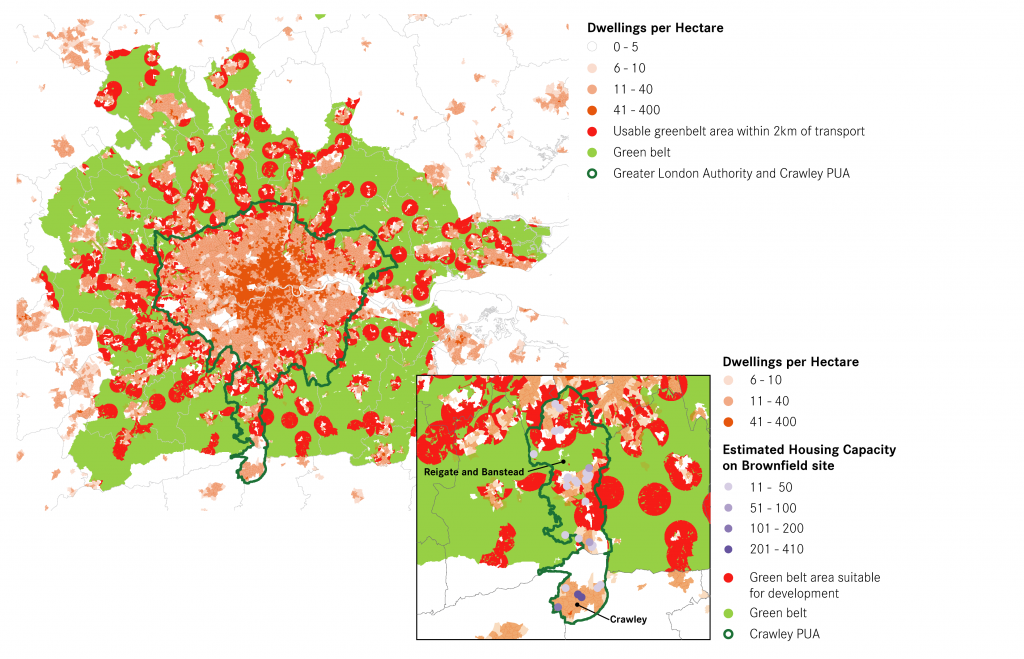 If every brownfield site in the Greater London Authority area (GLA) was developed to its full housing capacity, it could support the construction of up to 366,000 more homes. There would also be the capacity for 432,000 homes at suburban densities if 60 per cent of accessible green belt land was developed within these boundaries.

21 per cent of London’s workers commute from outside of the city’s boundaries and in Reigate and Banstead, for example, 40 per cent of residents travel to London on a daily basis.27 If 60 per cent of green belt land in the areas that are outside of London’s (GLA) strategic planning area was considered, there would be land available for a potential 3 million extra homes.

Based on the GLA’s housing estimates, an additional 20,000 ‘spill-over’ homes will need to be built each year outside of the 33 boroughs just to service the working population in London.28 But if green belt sites continue to be ignored, this responsibility will spread to areas further away from the capital – ‘leapfrogging the green belt’. East Hertfordshire for example, which is just outside of the green belt, would need to build around 14,000 homes in 10 years just to service the unmet needs in London. This would be just 4,500 homes if closer sites, currently designated green belt, were also considered.29 This suggests that reviewing the green belt would have benefits for both the city and neighbouring authorities. 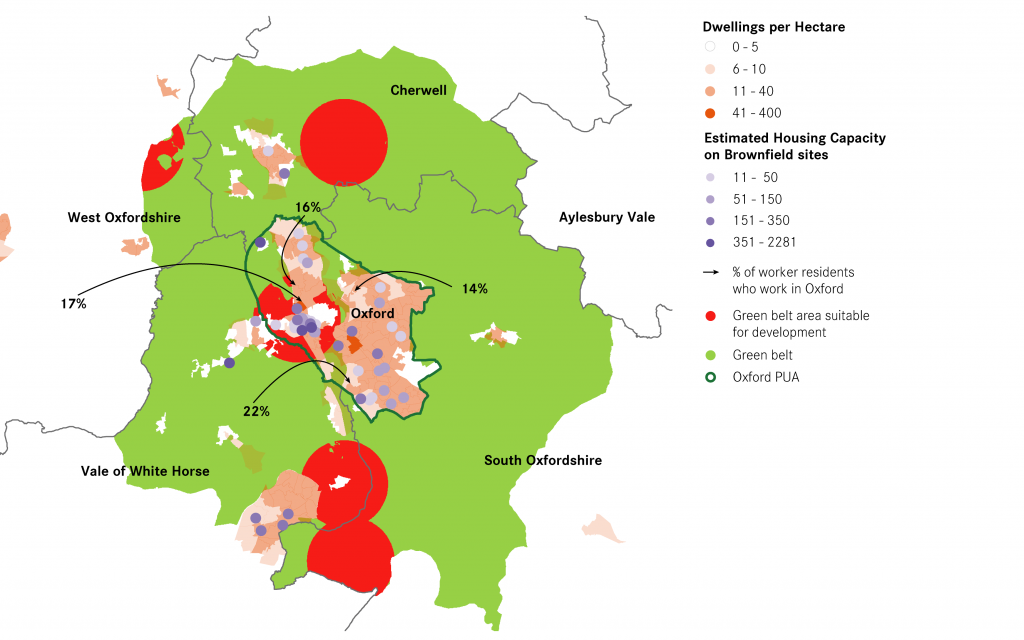 Oxford’s local authority is tightly bounded. It has relatively few brownfield sites of significant housing capacity (51 sites, 10 with a capacity for more than 50 homes), with the potential for a total of around 1,900 homes. Of these sites, over two thirds are in private ownership, which may complicate active public management. While the city is relatively low density, development is highly restricted due to the amount of protected and listed buildings.

The city has 400 hectares of green belt land within the local authority that if developed at low densities (60 per cent at 40 dph) could provide 9,500 homes within 25 minutes’ walk of a train station. Oxford also has strong economic links with neighbouring local authorities – see arrows on Figure 6. Well-connected land in these authorities would contribute 98,770 homes and contribute considerably to the wider area’s economy. 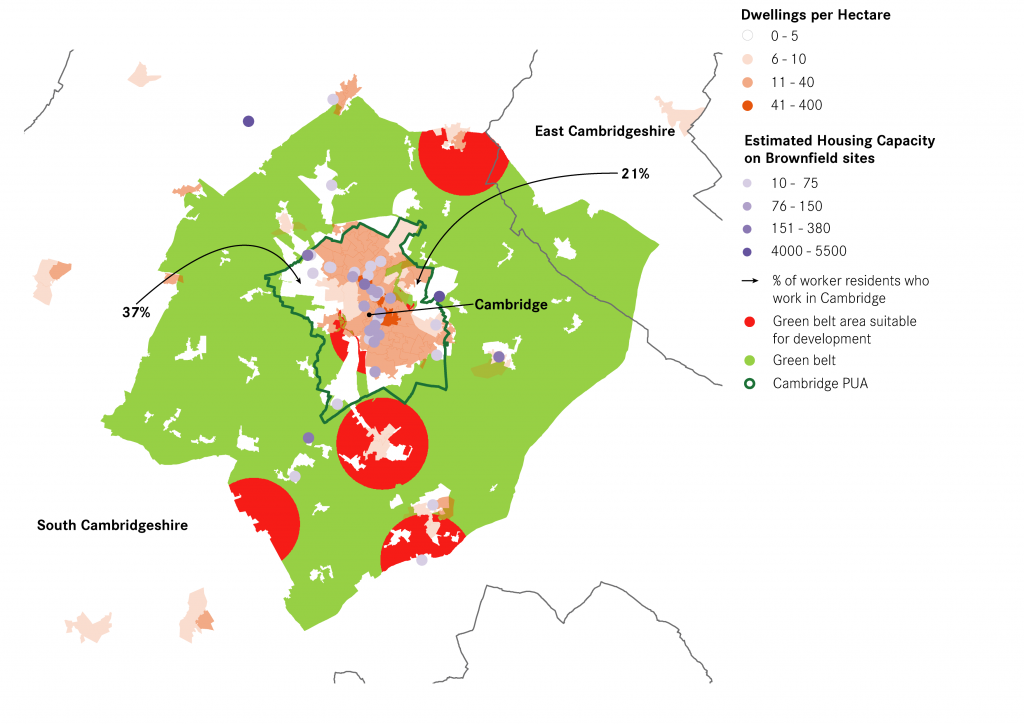 Cambridge’s local authority boundary is also tightly bounded. There are 35 brownfield sites within the city’s boundary, but only one site is owned by the city. Of the 3,000 hectares of green belt served by railway stations that surround Cambridge, only 118 hectares are in the local authority boundary. This would potentially bring around 2,800 homes.

In comparison, well-connected green belt land in South Cambridgeshire could provide 70,000 homes. The most significant brownfield sites are also in South Cambridgeshire – two sites that together could provide just over 10,000 homes on brownfield land including the greenfield land that they use, these two developments will bring in a total of 21,500 homes. Cambridge is also a key employer in the area – see arrows in Figure 7. 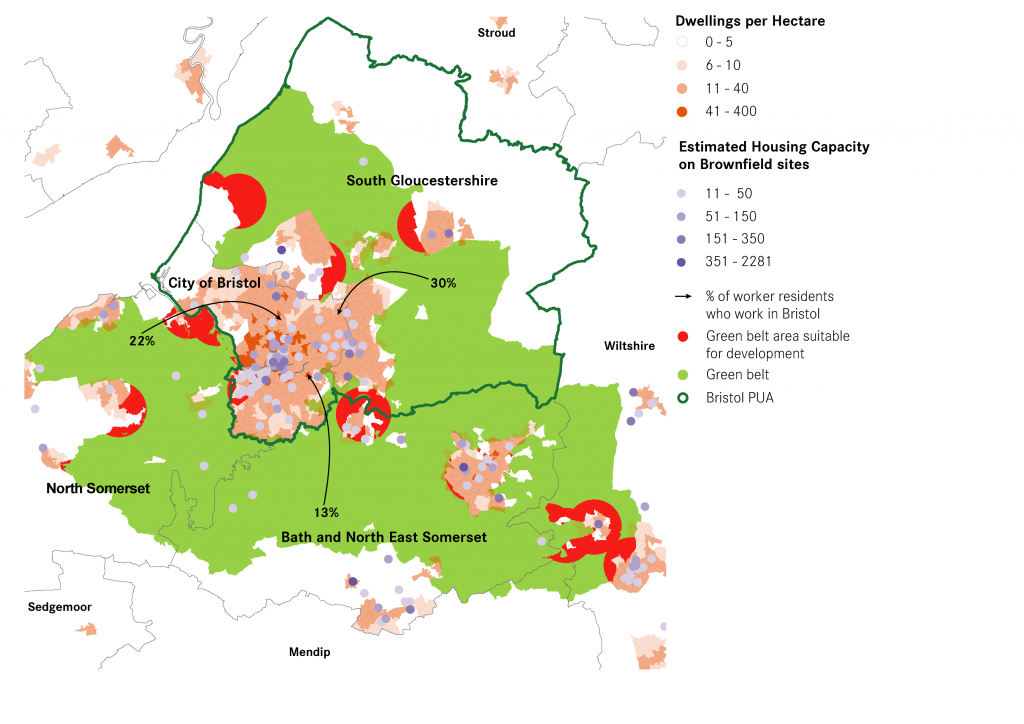 The West of England SHMA states that Bristol needs around 2,700 homes per year. The City of Bristol has many (96) brownfield sites within its boundaries, each with relatively small housing capacity – restricting potential strategic development. Most of the sites in the city and neighbouring authorities are privately owned, although the local authority owns brownfield sites with the capacity for 880 homes. The city is also planning for higher density developments.

Bristol has little well-connected green belt land that is close to train stations within its boundaries, although there would nevertheless be capacity for around 2,600 homes. Accessible green belt land in neighbouring North Somerset and South Gloucestershire has capacity for 24,400 homes and 48,600 homes respectively. Both are closely linked to the city economy: 22 per cent in North Somerset and 30 per cent of residents in South Gloucestershire work in Bristol.

These case studies have shown where there is capacity to build more homes in specific high demand cities. Cities have many different opportunities to find the land for homes. The next section looks at different approaches that could be used to actually build these homes.