02There is land to build homes for the least affordable cities

Land is the primary input into house-building. It makes up the largest proportion of costs to a house builder (in the UK) and is both an inherently fixed and scarce resource. This scarcity and permanence makes land values rise over time in the face of growing demand regardless of whether it is developed. This is then reinforced by regulation which limits developable land. Yet despite this scarcity, there is still enough land with development potential in and around the UK’s most successful cities to build more homes, as the next section will show.
The much stated truism is that there is no magic bullet to solving the housing crisis. Clearly a range of approaches are needed to increase the supply of new housing in areas where people want to live. This is good for individuals and good for the economy.

Nationally, the equivalent of one Milton Keynes is needed every year. For the UK’s least affordable cities, projections suggest over 685,000 homes will be needed in the next 10 years.5 So while the recent calls from both Government and Opposition politicians for a new set of garden cities such as the 15,000 homes proposed for Ebbsfleet are welcome, they alone are not enough. Furthermore, these garden cities will often take 30 to 40 years to deliver their full housing capacity, due in part to absorption rates of house builders and the new infrastructure needed. Similarly, the focus in London, and other big cities, on tall towers in the city centre will not be sufficient to address the chronic under-supply of housing in the least affordable areas.

This paper sets out the components of a successful approach to increasing land for homes in cities: firstly, by developing brownfield land; secondly, by re-evaluating the green belt; and thirdly, by working with authorities that ‘neighbour’ a city. This next section discusses development on these two land designations.

1. Making the most of suburbs: more homes within existing cities.

A missing component in the housing debate has been the role and importance of suburbs in successful cities. In truth, what happens in these places will be much more significant for the vast proportion of low and middle income market housing currently under-served in the country’s most successful cities. For example, suburbs are home to two thirds of those living in Cambridge and Bristol.6

Despite getting a tough time from many commentators, suburban housing with effective transport links remains enduringly popular. Housing in suburban London for example sells faster than anywhere in the UK.

Importantly, there are also opportunities to build in city suburbs. For example the GLA estimated that in London there are sites for 360,000 extra homes between 2011 and 2021 from infill and housing intensification on existing sites.7

This suggests that some cities can deliver homes within their boundaries by increasing the density and making the most of under-developed sites in existing communities; although, as the following section will show, the scale of opportunity varies across different cities. 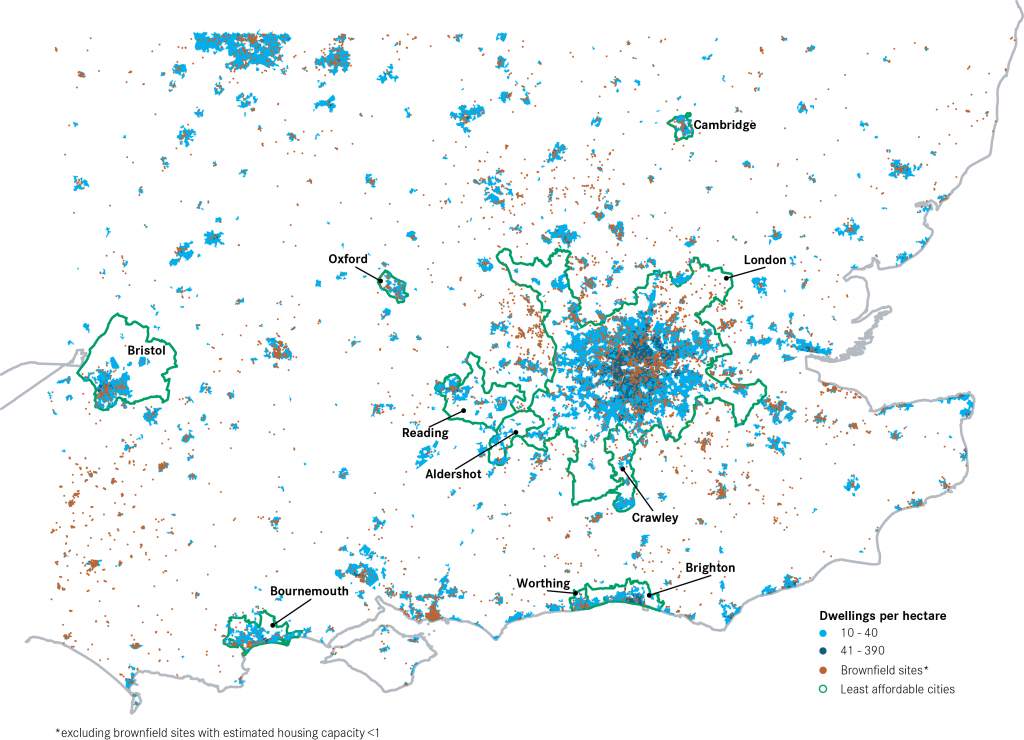 Brownfield housing capacity is determined by local planning authorities, who calculate housing capacity either according to existing planning permissions, or if these do not yet exist, on the basis of existing densities in the area, which differs between and also within cities. This only applies to sites that are judged to be suitable for residential development.8

Much of the housing in the UK’s highest demand cities is built at suburban – i.e. relatively low – densities. Only London, Brighton, Bristol and Worthing (of the 10 least affordable cities) have more than 10 per cent of residents living at densities higher than the suburban 40 dwellings per hectare.9 In many of these least affordable cities there is significant scope for delivering more housing by strategically increasing density in existing communities, andutilising and improving existing infrastructure and services.10

According to the 2009 brownfield records, if every site was developed to its full capacity, there is the potential for around 425,000 new homes within Britain’s 10 least affordable cities, 90 per cent of which would be in London (Figure 3).

Many of the brownfield sites that are still available, after 20 years of brownfield prioritisation by planning policy, require significant public intervention and investment to enable them to deliver the housing that is needed. This takes time and is costly, and while for some of these sites there is significant potential, others will not be viable, desirable or in the cities’ best interests to develop. This suggests cities need to look beyond brownfield sites alone, to other types of land.

2. Why brownfield sites are not enough

While brownfield sites can support effective, densely built communities close to the existing jobs and services of city economies, there is insufficient brownfield land to meet the housing needs of the UK’s most successful cities. Many of these cities are constrained in the housing they can deliver by their boundaries. This can be due to administrative borders, as the housing markets for the UK’s most successful city economies go far beyond the city boundary. It can also be due to planning constraints such as the green belt.