02How has the labour market changed?

Most Core Cities entered the pandemic with above average claimant rates. All of them have seen claimant rates rise since then, and the Job Retention Scheme (JRS) – or ‘furlough’ – has prevented rates from rising even higher.

Figure 1: The Core Cities entered the pandemic with above average claimant rates, but experiences have varied 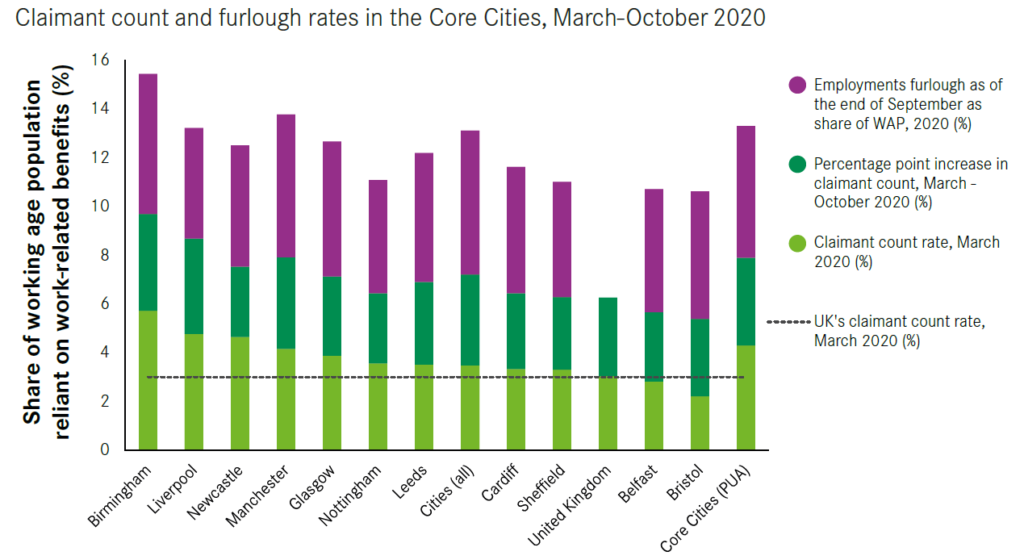 However, although most Core Cities entered the pandemic with weaker labour markets, they have not experienced the worst shocks, either in terms of unemployment or furlough. Figure 2 shows that the Core Cities account for a smaller share of the rise in unemployment and the furloughed workforce than their pre-pandemic share of unemployment.

Figure 2: The Core Cities accounted for a lower share of job losses than their prior share of the claimant count

This appears to be because although the Core Cities were home to a disproportionate number of people claiming unemployment benefits – many of whom are likely to be low skilled because of eligibility criteria – they are also more likely to be home to jobs that can be done at home, which are likely to be in higher-skilled occupations.

The ability of places to bounce back depends on how affected their export base (e.g. automotive, finance, tech etc.) has been rather than on local services such as retail or hospitality, as it is these exporting jobs that sell goods and services to markets in other cities and countries. They bring money into their local economy to be spent on local services.

Box 1: What are exporting and local services jobs?

Broadly, all jobs can be divided into two types, depending on the location of their market.

Local services, such as cafés, dentists, and high street retail, provide goods and services directly to customers, and so locate where there are people to sell to. Exporters, such as finance, manufacturing, and tech, sell to markets in other cities and countries, and so locate in the places which suit the needs of their business and workers.

Local services are the majority of jobs in cities, but exporters are particularly important for city economies, as their activity brings money into the local economy that is spent on local services. Differences in the performance and characteristics of exporters largely explain economic divides across the UK.3

There are differences within these sectors. High-skilled and high-paid exporting jobs disproportionately locate in city centres as firms and workers typically require the benefits that those locations can offer: a deep labour market with lots of specialised work and the sharing of infrastructure and ideas. These exporting jobs then help support local services jobs within the city centre.

Furthermore, some types of local services work, such as high street retail, were already in difficulty before the pandemic in many places, while others such as hospitality were experiencing rapid growth. The extent to which the pandemic changes the relative needs of firms and workers and the preferences of consumers will shape the future recovery of different types of work and correspondingly the recovery of cities.

Covid-19 has disproportionately affected local services businesses such as those in hospitality and leisure. These jobs are spread across the country because they locate wherever there is a population centre. This helps explain why there has been no particular geography to the jobs impact of Covid-19, and why the north-south divide has been complicated by the pandemic.

There is no local level data on the sectoral make up of JRS claims. National data shows JRS claims to be overwhelmingly used by local service industries and, given the nature of restrictions and the spread of local services jobs, this is likely to hold across most of the country.4 By extension, places that have a furlough rate well above average may have either seen their export base particularly affected, or seen local services particularly hard hit if a large share of them depends on footfall in city centres. Setting a threshold on the JRS claimant rate of 7.5 per cent offers a rule of thumb as to which places have been disproportionately affected.5

To disentangle as to whether high JRS rates suggest an impact on the export base, or are a result of city centre workers working from home, Figure 3 brings JRS data together with estimates of home working to show the impact that Covid-19 is likely to have had on the jobs market. It splits the chart into quadrants, depending on whether cities sit above or below the JRS threshold, and above or below the national average for estimated levels of home working.

Six Core Cities sit on or below the 7.5 per cent threshold, suggesting that when lockdown restrictions are lifted, they are relatively well placed to bounce back as their exporting base has remained largely unaffected.

Figure 3: The Core Cities have mostly adapted well to homeworking 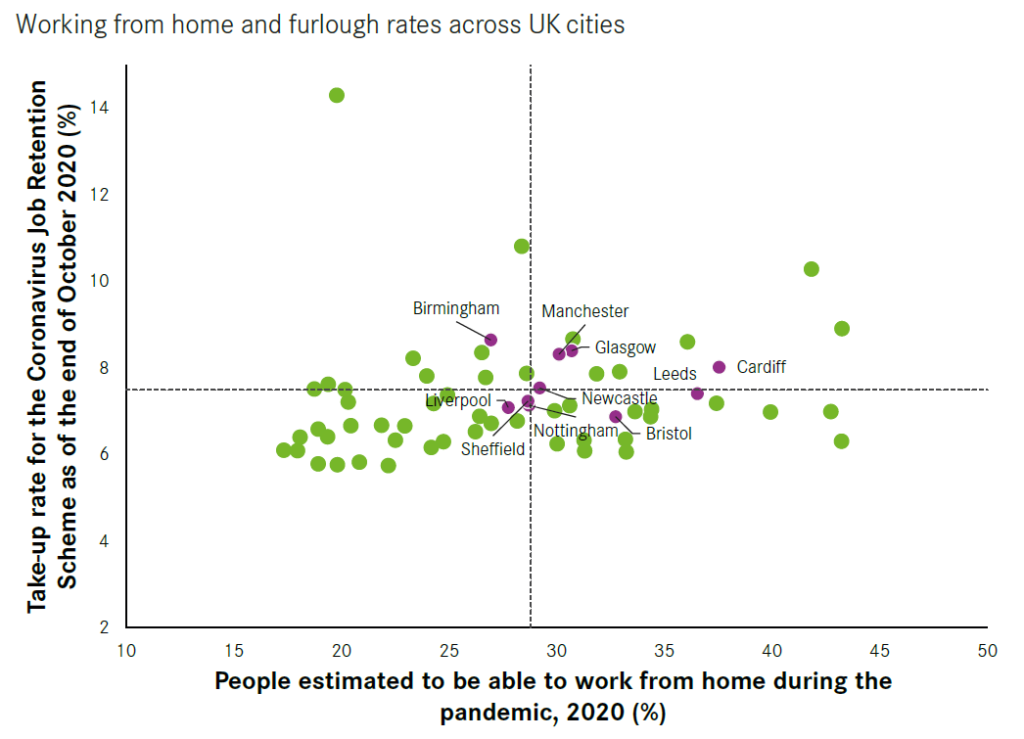 Manchester, Glasgow, and Cardiff sit above it. Their above average levels of homeworking may help explain this. If many of these jobs were city centre based, then their decoupling from the workplace is likely to have had a disproportionate impact on local services. Their higher rates of JRS may suggest not that that their exporting bases have been unusually impacted, but rather that their local services sector has been hit hard by the emptying of city centres. This would suggest that they too should also expect to see a bounce back once restrictions end and city centre workers return to their offices. However, Birmingham in the top left quadrant may have seen a sharper shock to its exporting base than other cities, suggesting it may need additional support from the Government as it recovers.