How do UK cities compare to their other European counterparts? This section explores the relative performance of UK cities on five economic indicators:  industrial structure, skills, innovation, employment and productivity.

The industrial structure of cities, which reflects the type of investment they have attracted over time, varies across Europe.

Figure 8: Cities by share of manufacturing and utilities jobs, 2011 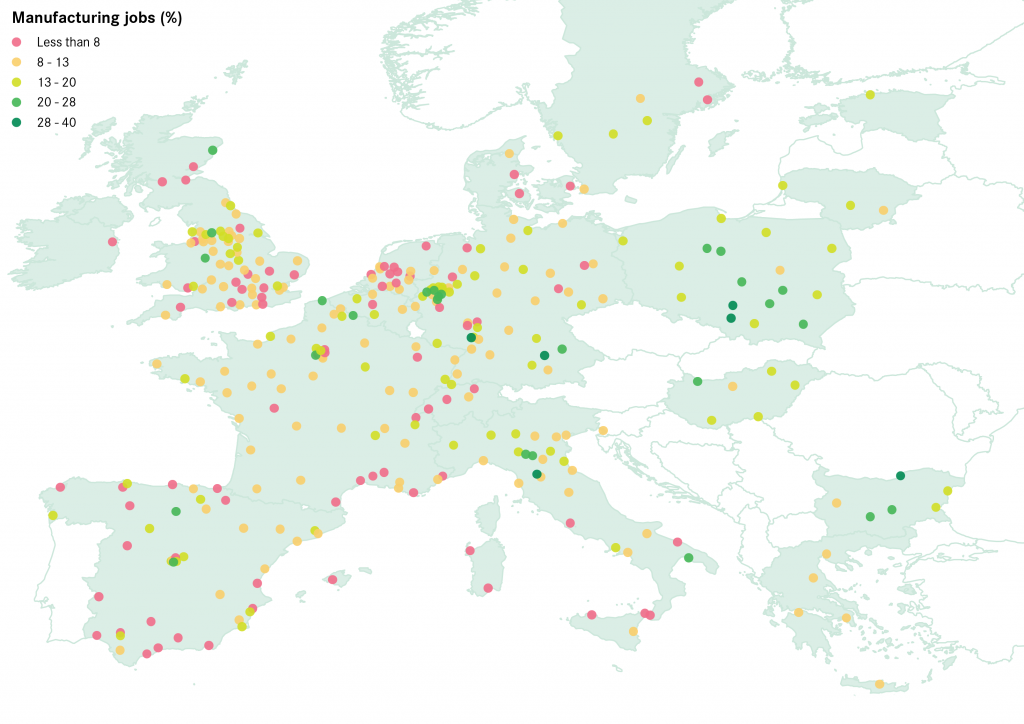 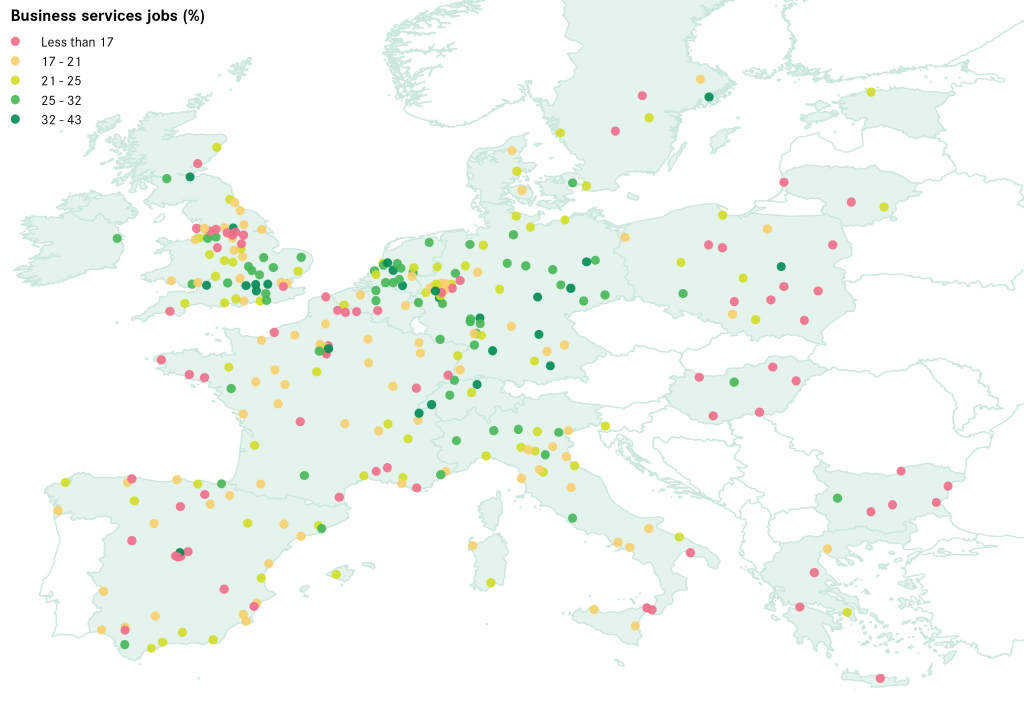 Figure 9 shows a concentration of highly service-oriented cities in specific areas, in particular in the South East of England, as well as in Belgium, the Netherlands, Germany and Switzerland. In total, 19 UK cities rank in the top 25 per cent of European cities for their share of business services – with London and Reading ranked 3rd and 4th respectively. Although the most service-oriented cities are located in the Greater South East, Leeds, Edinburgh and Warrington also have more than 30 per cent of their workforce employed in business services.

Germany does not show such divides: there are 26 cities in the top 25 per cent for business services jobs, and only three in the bottom 25 per cent. But interestingly, the Rhine-Ruhr area concentrates both manufacturing and services cities: larger cities (Dusseldorf, Cologne, Essen) have more than 30% of business services jobs, while surrounding cities have relatively high shares of manufacturing and utilities jobs (Leverkusen, Krefeld, Solingen).

Human capital is an essential element to urban economic performance. Research has shown that individual graduates tend to receive higher wages,6 that the proximity to college-educated workers enhances lower-educated workers’ wages, 7 and that a higher stock of human capital is positively correlated with urban productivity.8 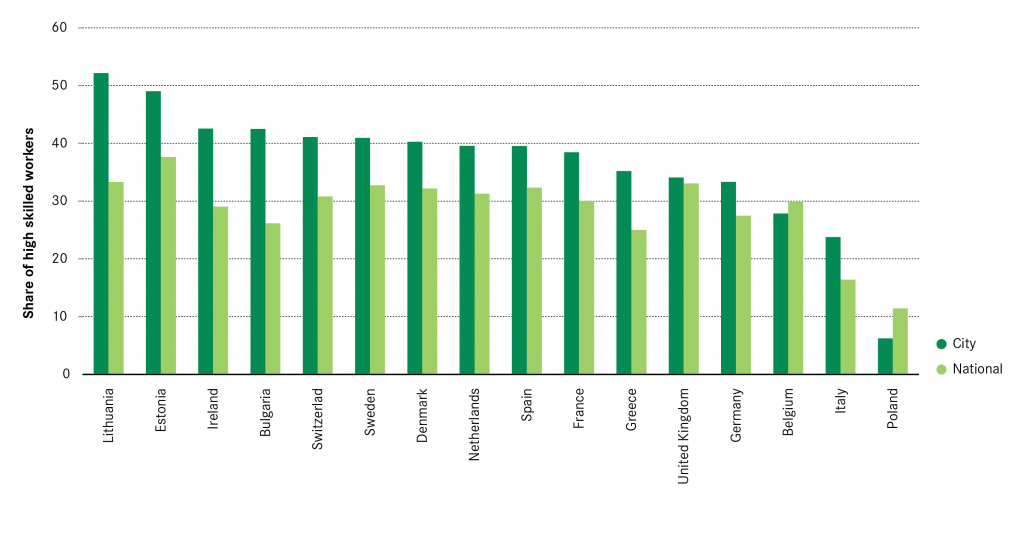 Going beyond these average figures shows that there are great disparities in the distribution of high-skilled residents across UK cities. On the one hand, Cambridge, Oxford and Edinburgh all rank in the top 10 cities across Europe for high-skilled residents, with Cambridge ranking first across the continent.

The underperformance of UK cities is even starker when looking at low skills. The UK stands out in Europe regarding the share of low-skilled residents in the population, both at the national and city level. As Figure 11 shows, UK cities have a significantly higher share of low-skilled residents compared to cities in most other European countries, with 34 per cent of the urban population having not achieved five good GCSEs. In the Netherlands the proportion of city residents with equivalent education levels is 25 per cent, and only 16 per cent in German cities and 12 per cent in Swedish cities. Interestingly, several Eastern European countries including Bulgaria, Hungary and Lithuania have very low proportions of low-skilled residents in their cities – in Lithuania for instance they represent only 3 per cent of the city population. 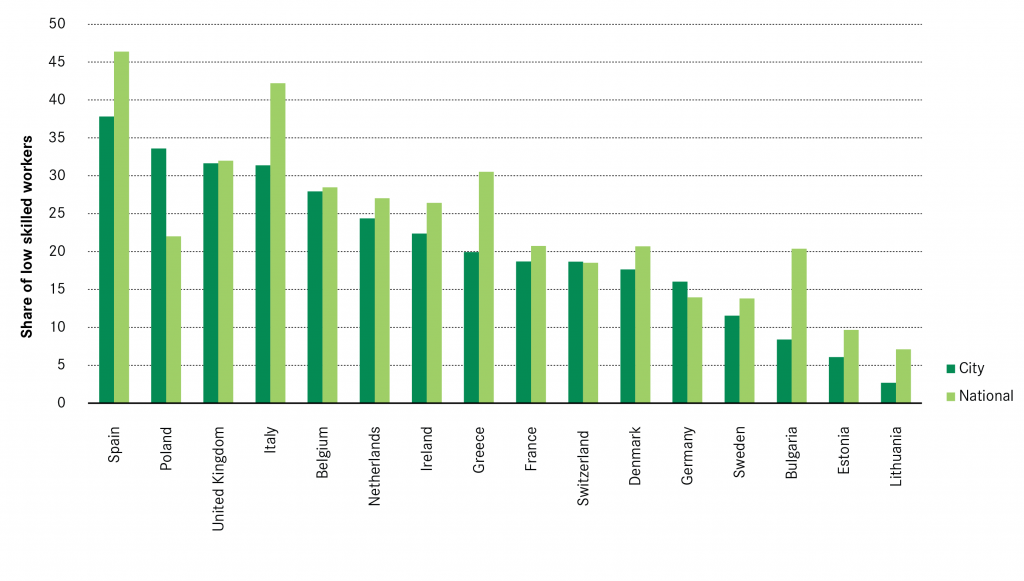 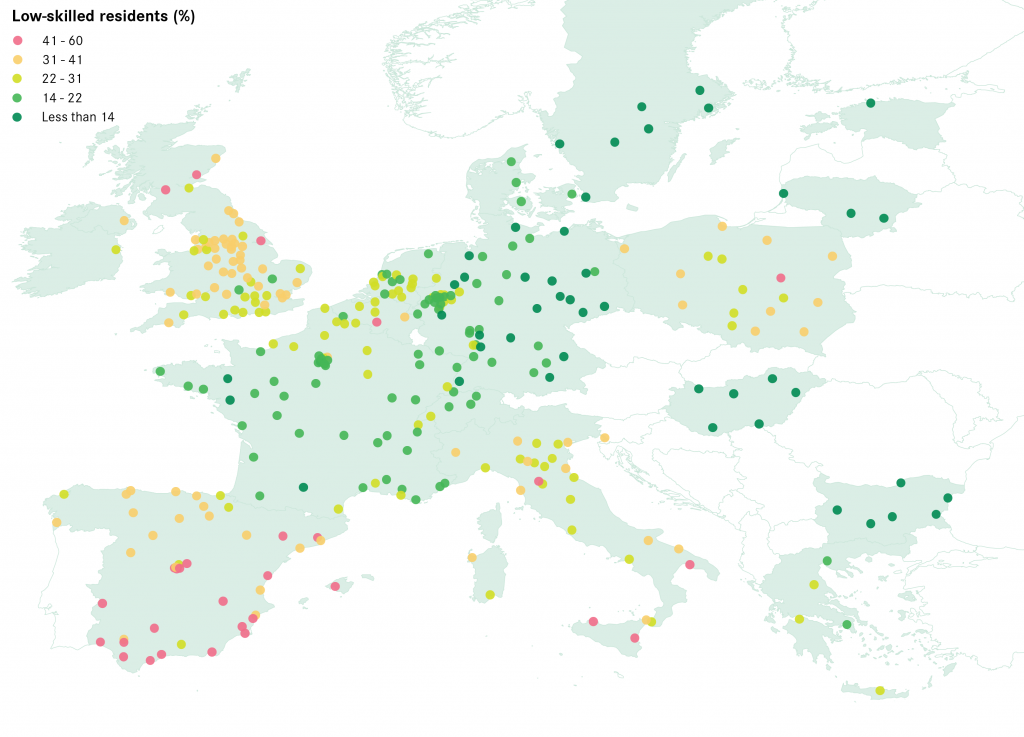 There appears to be two reasons for this. The first is that the German education system requires students to study until they are 18. This has only been recently applied in the UK. The second is that the system strongly encourages students to pursue vocational training and apprenticeship programmes, as opposed to the traditional curriculum leading to university.

German students can choose to study in duale berufsausbildung (dual vocational training) around age 16, where they get both classroom instruction and on-site training in a company. After completing the programme, apprentices have the option to undertake through further part-time vocational training or higher education, and on average 59 per cent of them are employed by the training firm. A firm is estimated to save some £3,750 in recruitment and training cost for each apprentice they hire full-time.10

Vocational training is a very common education pathway in Germany. In 2012, 54 per cent of the German workforce had received its qualification through a dual education apprenticeship, while university graduates only represented 18 per cent of the workforce.11

Figure 13 shows the number of patents filed to the European Patent Organisation (EPO) in 2011, normalised by population. There is a clear belt of innovative cities stretching from Belgium and the Netherlands to Switzerland and the French Alps, crossing most of the west of Germany – 12 of the 20 cities with the highest number of patents per inhabitant are German (see Box 3). Some cities in the North of Italy, along with Scandinavian cities, also have a high number of patents per 100,000 inhabitants. 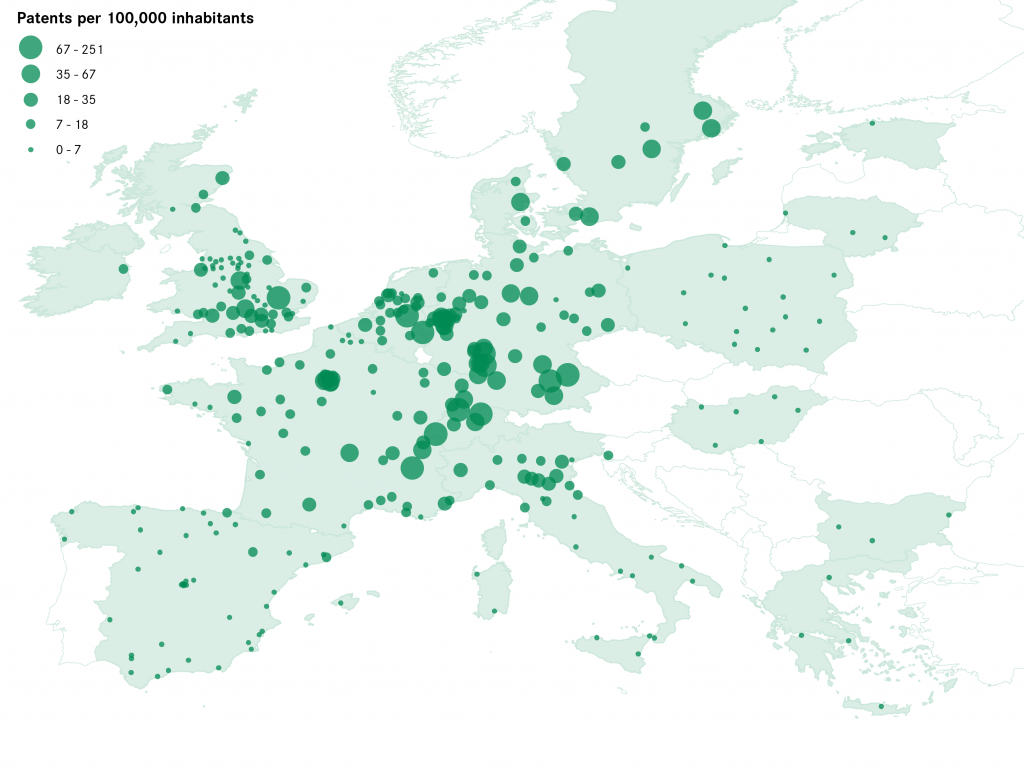 In the UK, there is a clustering of innovative cities in the Greater South East, with the notable exceptions of Coventry, Derby, Birkenhead and Aberdeen. In total, 11 UK cities are in the European top 25 per cent for the number of patents per inhabitants. Two cities, Cambridge and Oxford, rank in the top 20 cities on this measure, with 74 and 50 patents per 100,000 inhabitants respectively. 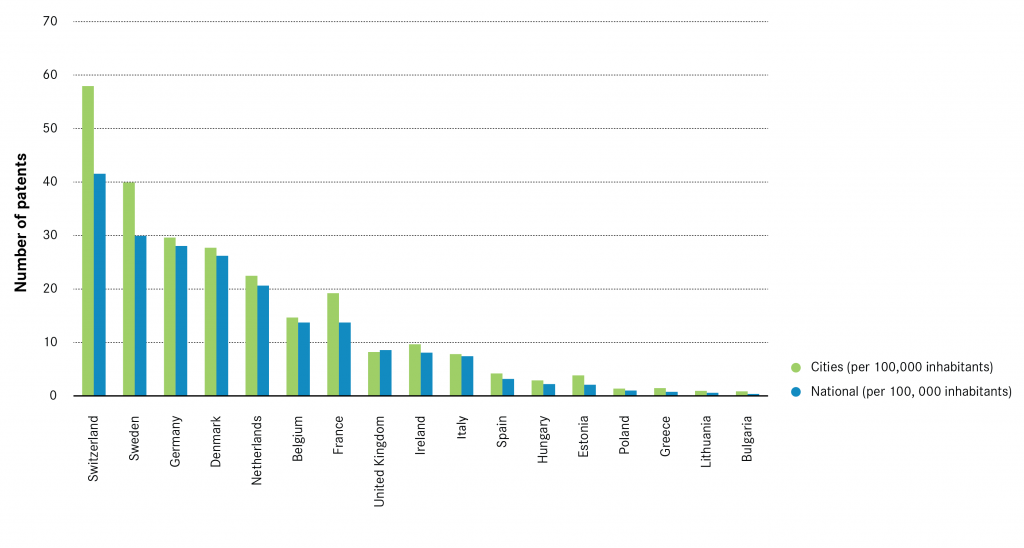 Cities that produce the most patents in the UK are mostly small or medium-sized. Out of the 11 cities in the top 25 per cent, seven are small and three are medium-sized, while only one – Bristol – had a population of more than 500,000.

The top 20 cities with the highest number of patents per 100,000 inhabitants have some interesting similarities.

15 of the top 20 cities have at least one university ranked in the top 500 QS World University Ranking. Among these, six cities have a university ranked in the world top 100: Cambridge, Oxford, Zurich, Lausanne, Munich and Heidelberg. But university R&D does not tell the whole story. Many of these cities also have high numbers of innovative and tech industries, which benefit from the proximity to public research institutions for collaboration and retention of talented workers. Eindhoven in the Netherlands, Cambridge in the UK or Grenoble in France are examples of such “regional innovative systems”.13

That said, a number of cities do not have a highly-ranked university but are nonetheless strongly innovative: Ingolstadt, Ludwigshafen am Rhein, St-Quentin-en-Yvelines, Mulheim an der Ruhr and Leverkusen. All these cities have more than 20 per cent of their workforce employed in manufacturing and utilities and all belong to the top 10 per cent of cities with the highest proportion of jobs in these industries. These cities are typically small in size and their economy is dominated by one or two large manufacturers, which explains the very high number of patents per inhabitants. In Germany, Ingolstadt is home to the headquarters of the car manufacturer Audi, Ludwigshafen am Rhein is the site of BASF – one of the largest chemical producers in the world, and Leverkusen benefits from the presence of the pharmaceutical group Bayer. St-Quentin-en-Yvelines, in France, is home to car manufacturer Renault’s R&D centre.

The UK has a high employment rate nationally, and this good performance is reflected across its cities. 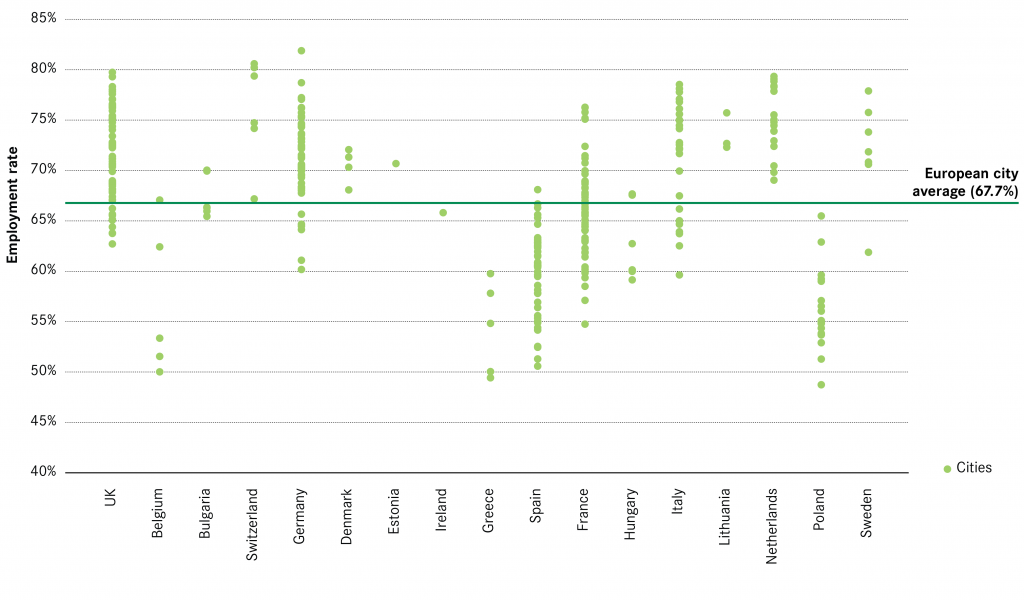 Only six UK cities have a higher productivity than the 330 European cities average – London, Slough, Reading, Milton Keynes, Aberdeen and Aldershot. Meanwhile more than half of UK cities (38) are among the 25 per cent of cities with the lowest productivity. 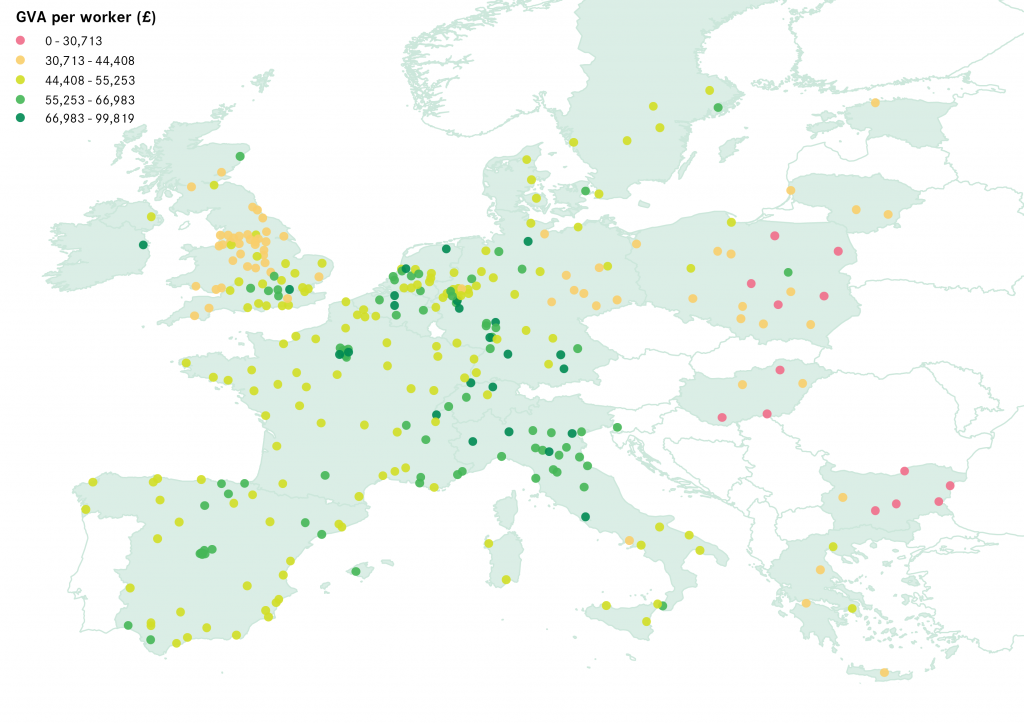 On the other hand, the map also reveals a clustering of low-productive cities in the north of England, with city productivity ranging from £30,700 to £44,400. Putting aside a few exceptions, cities with a similar level of poor productivity can only be found in the East of Germany and in Eastern Europe.

As in most European countries, labour productivity in the UK declined as a result of the 2007/08 recession. But while it has picked up elsewhere in the years since, it has continued to stagnate in the UK. In 2014, the level of productivity was 20 percentage points below the average for the G7 economies.14

The Bank of England estimated that the UK productivity in 2014 was 16 percentage points lower than it should have been if the pre-crisis trend had carried on.15 4 percentage points are considered to be caused by mismeasurement issues, 3 to 4 are estimated to be due to reduced investments in capital, and 3 to 5 in slow reallocation of resources and higher firm survival rates during the crisis.

Figure 19 compares the productivity of UK cities against that of their closest European neighbour in terms of industrial structure. For each UK city the proportion of jobs in each sector of the economy is compared with that of each other European city of similar size to find the closest match.

The index shows that 46 of the 62 UK cities have a lower productivity than their ‘twin’ city. This means that, for a similar economic structure, these cities produce less output per worker than their nearest comparator. For example, despite their similar economic structure, productivity in Manchester is 35 per cent lower than in Hamburg (Figure 20).

Figure 20: Industrial structure and productivity in Manchester and Hamburg, 2011

Large cities are punching below their weight

In general larger cities tend to have higher productivity than smaller ones: the 65 European cities with more than 500,000 inhabitants have an overall productivity of £59,600, whereas the European city average is £56,300. But this does not seem to be reflected in the UK (Figure 21). 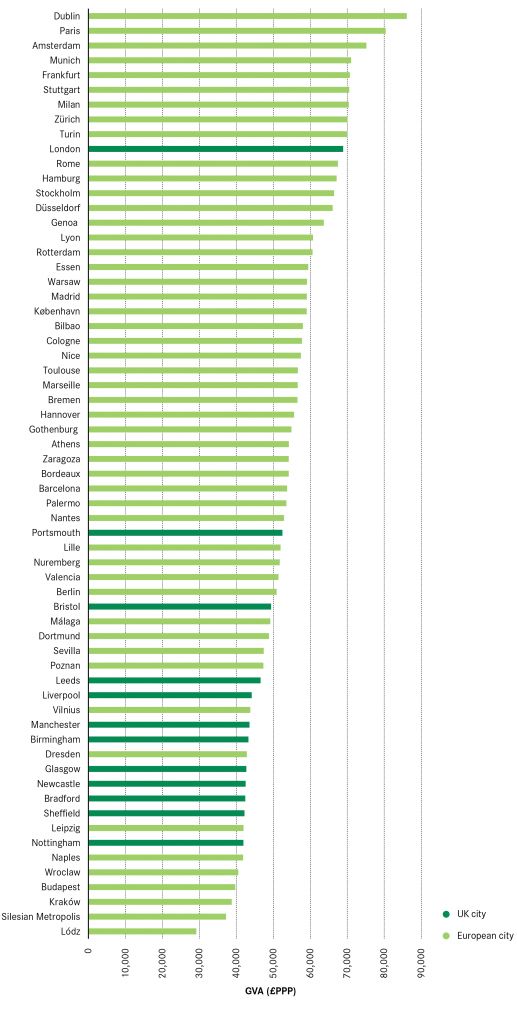 This result reflects research by the OECD, which found that larger cities tended to be more productive than their national averages, apart from the UK. This suggests that large cities in particular in the UK are failing to realise the benefits of agglomeration compared to their European counterparts.