The Government’s domestic policy agenda has been much vaunted over the past two years, but it has yet to be defined. With the impending publication of the Levelling Up White Paper, this should finally be about to change.

The paper is anticipated to be more than 100 pages. If it is to address a challenge that successive governments have tried (and largely failed) to tackle for over 90 years, what will those pages need to contain?

Here are five questions to ask when assessing how effective levelling up is likely to be as a strategy:

1. Is there a clear mission statement?

Despite the endless hours of officials’ time that went into the now defunct industrial strategy, both at a local and national level, it was incredibly easy for Boris Johnson to drop Theresa May’s flagship domestic policy. It had no clear goal and its lack of focus meant it became all things to all people (becoming a discussion about inclusive growth rather than productivity growth).

Levelling up must be defined explicitly and coherently in the white paper. If this is not the case, expect it to go the same way as the industrial strategy when there is a change of administration.

A strategy involves choices, trade-offs and prioritising some things over others. This goes against political instinct, which is to promise something for everyone.

If levelling up is to be a success, its aims will have to be focused. From an economy perspective, this includes improving the underperformance of big cities, rather than spreading resources thinly across the country.

Figure 1: Large cities account for the majority of underperformance in most regions 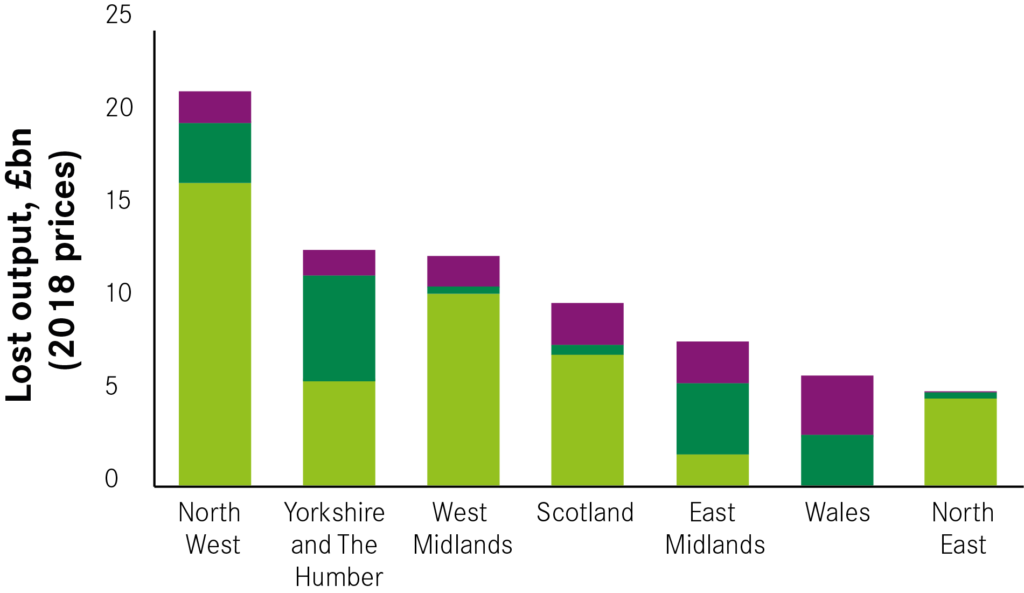 While the goal of levelling up the economy should be to help every place achieve its productivity potential, these estimates highlight the current drag that large cities have on their wider regions. But it also shows the size of the prize for regional and national economies if policy can get these cities firing.

Economic divides across the country are more than a century old and Government has been trying to do something about it since 1928. 1 2 This challenge cannot be solved before the next election, although clearly the Conservatives must have something to show the electorate when they return to the ballot box.

The UK has a long history of constantly changing policies and institutions, which does not help the development of policy.3 Germany (often described by the Prime Minister as a model for levelling up) did the opposite during reunification – it saw the goal of bringing the west and east back together as a multi-decade project. The white paper needs to credibly set out something similar if the gaps between the North and South are to narrow.

4. Is it backed with funding, and what are the mechanisms for spending it?

While last October’s spending review set out the spending envelope for the Government for the next three years, this only spans the first period of the levelling up plan. The white paper should set out outline funding for the whole plan.

How much should it be? As a yardstick, Germany spent €2 trillion on reunification. Headline-grabbing announcements – something the current Government excels at – will mean little if they are only backed by a £5 billion fund here and a £4 billion fund there. The amount of money committed to the project will show whether the Government is serious.

The mechanisms through which this money will be spent are also important. The Prime Minister has said the white paper will go further on devolution and, for this to be a success, there needs to be a reform of local government to encourage the capacity and institution-building needed to take on further powers. The little power local government does have is diluted by the multitude of authorities that carve up local economies, and this makes it ill equipped to address the challenges these places face.4

5. Are there clear metrics for measuring success?

In defining the mission statement, the Government should set out what it hopes to achieve. Without clear targets, policy can never fail. But it is also highly unlikely to succeed.

Centre for Cities has defined these targets as:

The white paper should also state when the Government expects to achieve these targets or, more pragmatically, that levelling up will remain a national priority until they are met.

To hit these targets, policy must focus on the fundamentals rather than cosmetics

The Conservatives will need some cosmetic policies if they are to have anything to show at the next election; more money to improve the look of high streets, for example, should come as no surprise. But the economics mean that this cannot be done without dealing with the underlying issues.

The important question to ask in addressing the third target above is: ‘Why do high-value businesses locate where they do?’ It is the lack of these firms in certain parts of the country that drives the economic divide. Without policy to reduce the barriers that cause this, there will be no rise in wages, no increase in innovation and, as the next chapter highlights, no improvement in the fortunes of high streets. Policies announced in the white paper will need to show how they can solve this issue if they are to make places more prosperous.

There is no doubting the sincerity of the many governments that have tried to tackle the levelling up challenge. But aspiration does not always lead to meaningful change. Politicians are good at delivering the former; the white paper needs to provide the latter.

The high street is likely to form a significant part of a levelling up strand that the Government has termed ‘pride of place’. Many high streets have been declining for years, even before Covid-19 hit. The next chapter explores the impact the pandemic has had on them and whether, in the time it has taken levelling up to be defined, it has delivered the final nail in their coffin.