The political imperative for investing in the North and Midlands is clear from last month’s election. But the Government must work with economic realities if it is to deliver for the voters who delivered its majority.

The first is to end austerity for local government in this year’s Spending Review. As Cities Outlook 20191 showed, local government is the part of government that has by far and away been hardest hit by austerity. This has had implications for the range and quality of services local government delivers, particularly those for which it does not have a statutory obligation. To protect spending in social care for example, other areas such as spending on planning and cultural services have seen even larger cuts.

The second is to make good on its election commitments to increase spending on other public services, such as education, policing and the NHS. In doing so it can pull a lever over which it has clear control to improve the standard of living for people everywhere, including in its newly-won constituencies.2

In stark contrast, the levers it has to pull to significantly reshape the economy – and specifically where certain parts of the economy locate – are much more limited, despite claims made by politicians for many decades.3

The move to a more knowledge-based economy that has happened in recent decades and that will most likely continue in the coming ones is one that, in principle, benefits the largest cities and towns. This has been seen in a number of developed countries,4 and occurs because of what urban areas allow businesses to access – deep pools of talent and knowledge.

The major problem for the UK is not that these trends have left some smaller places behind, although clearly a number have suffered, but that many large cities in particular have not been able to sufficiently grasp the opportunities these global forces have presented to them. Cities such as Manchester and Liverpool lag behind the national economy in terms of productivity, when they should be leading it. In 2018, cities in the South5 were 43 per cent more productive than those in the North and Midlands (see Figure 1). If the cities of the North and Midlands ‘levelled up’ to those of the South, the UK economy would be £183 billion — or 9 per cent — larger. 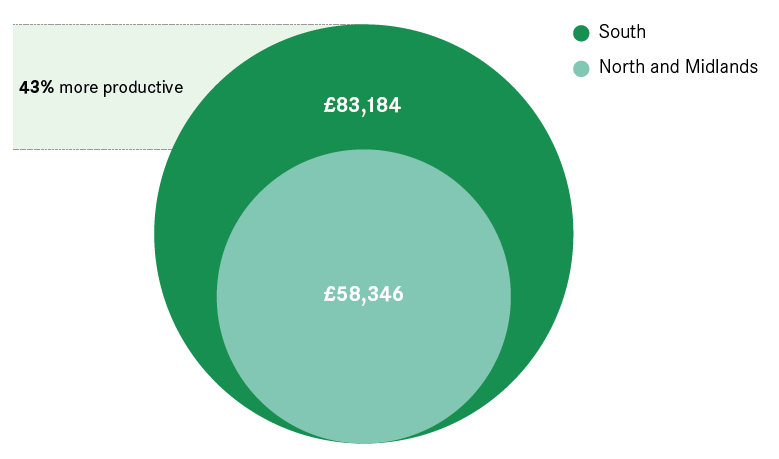 Selective investment in a few places reflecting relative potential, rather than jam-spreading money across lots of areas.